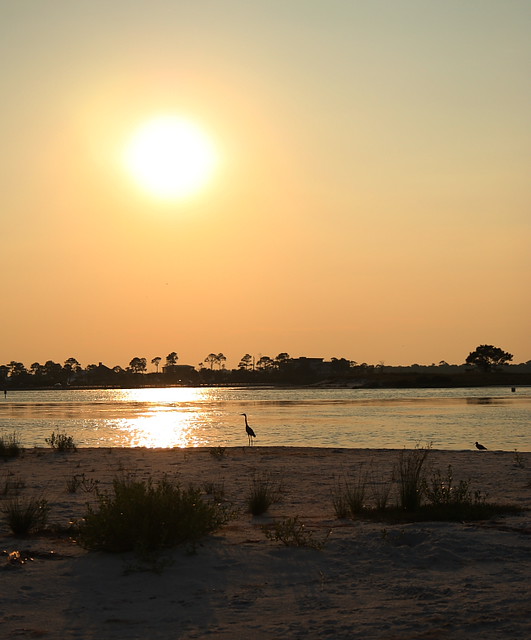 Oh friends, pardon my little hiatus! Y’all have been so very kind to check and make sure we are alive and well, and I’m happy to report we are! The kids and I headed home from the Gulf Coast mid-July and ended up staying home for about a month. We headed to the wonderful McBeach {coming up next post} for a week at the end of July/beginning of August then we rushed home for a week to pack our belongings to move to the Gulf Coast… all of this occurred with me behind the wheel, as Justin is still in his full-time oil spill response position. I’m not sure you’ve ever taken your kids to the beach for a week and then returned home to pack and move indefinitely, but it will about do you in {especially when you do it all without a spouse to help tag-team}. Y’all, life has been busy. Change is very good, in our case, because we now {after almost a year} live full-time with Daddy again. But change is also hard; we are in a new town, with new schools, new church and new routines. Lots of tears have been shed, mostly by me, because my children are so much stronger than I am, they’ve not shed a single tear. I’d say my tears are likely induced by sheer exhaustion, stress and sadness over leaving what is familiar. 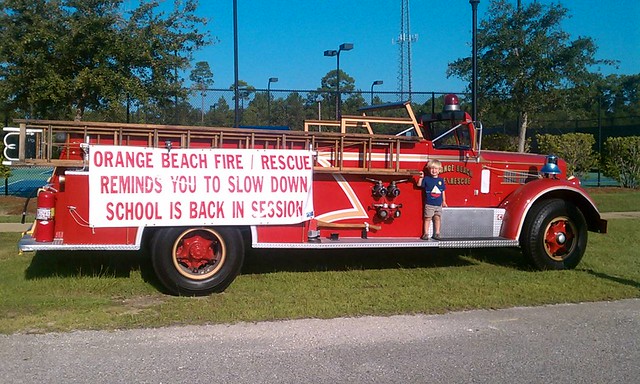 On July 5th {the same day that Montye passed away} my Jesus Calling devotional read, “Instead of striving for a predictable, safe lifestyle, seek to know Me in greater depth and breadth. I long to make your life a glorious adventure, but you must stop clinging to old ways. I am always doing something new with My beloved ones. Be on the lookout for all that I have prepared for you.” The Lord clearly spoke to me through this. In fact, I re-wrote it in a notebook and found myself seeking encouragement from it throughout the last 6-8 weeks as we made the decision to relocate our family. I am continually reminding myself that the Lord doesn’t want me to strive for what is comfortable, safe or predictable… but that He is always doing something with His beloved ones. I have moved so many times, and it never gets easier, but on the flip side it will certainly point you to the cross. This move is only temporary, and I’m not sure if that makes it a little easier. I think it does, but it’s still hard. We are renting the same home we’ve had throughout the summer {thankfully} and we brought only our clothes {well, and a bunch of other stuff the kids sneak in the car every time we return home}. I tend to be a “nester” and there’s not much nesting to be done with someone else’s belongings and bedding etc… but there’s also freedom in the fact that these belongings are not my own. Besides keeping them in one piece and clean there’s nothing else to worry with.

The day we returned to our “new home” the kids met their new teachers {which are all wonderful and all 3 named Kimberly}. It was hard the hardest day by far.  I was not only losing my children to all-day school for the first time, I was losing them to a school where we knew no one. I walked in with a lump in my throat and wished I could just wear my sunglasses inside the whole time. I wished for a familiar face… but there were none. We just spoke to our two new teachers, then we left and then I cried a lot… wishing for what was familiar, thinking maybe I could handle another year alone with the kids back home {although deep down, I’d had my fill of that!}. The kids, on the other hand, were total rockstars and so excited about the new schools. That helped me tremendously. They started school the following Monday, and Justin graciously accompanied me so I wouldn’t be a basket case. The kids were so excited, and we were so rushed there was little time for emotion. Once they were all safely in their classrooms I decided school wasn’t so bad.  I had time for myself for the first time in months and months.  I thought to myself, “I could get used to this!” I may have even said it out loud! 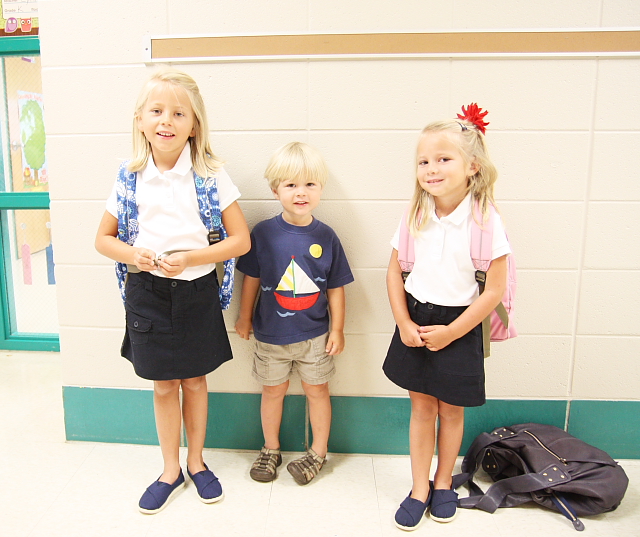 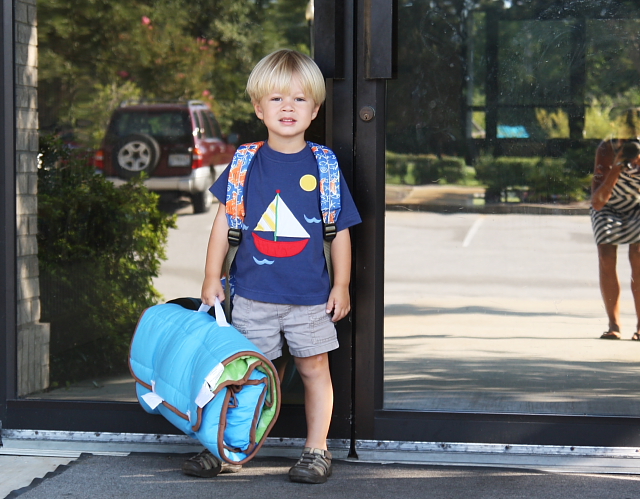 Rover is enrolled in a 3-day church preschool in which he waltzed right in the first day and hasn’t looked back. It actually runs into the afternoon, and he has the option to stay after lunch and have his nap there, on his new napmat {that he was more proud of than his back pack}. This little added bonus of naps at school have afforded Justin and I a couple lunch dates, and considering we are about a year behind on dates we have taken advantage of this “school nap” more than once!

We are a couple weeks in now, and I am adjusting to our new schedules and waking up at crack of dawn, which isn’t so bad when you get to have coffee on your deck and look at this… 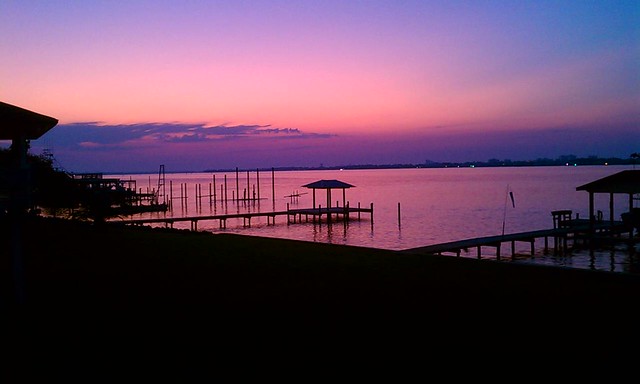 One morning was all it took for me to figure out doing breakfast, lunch and dressing children in the morning wasn’t going to fly. I’ve decided that lunches need to be made the night before. I’ve also decided I’m very much on board with their school’s fairly strict dress code… and I could eat them up in their little school outfits! We are still a cable-tv-free home, which thankfully means our homework has little competition. We’ve found ourselves at the library and pool after school. Now ask me again about being tv-less when Auburn football starts and I may change my tune! 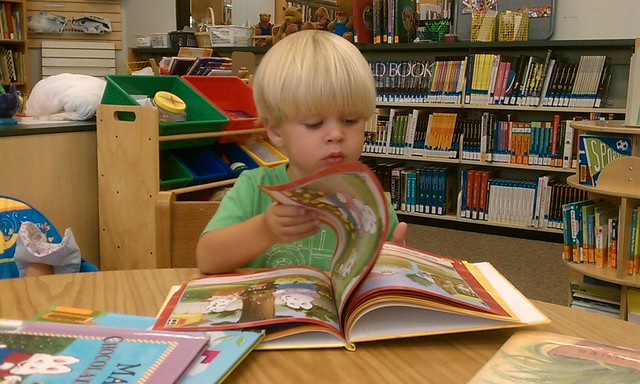 Rover and I stroll the mornings he doesn’t have preschool and occasionally make a few stops along the way. 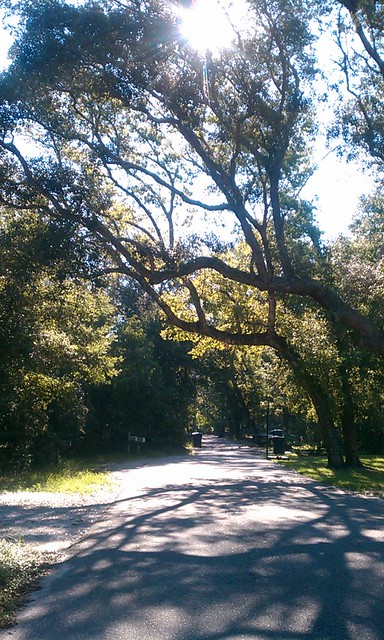 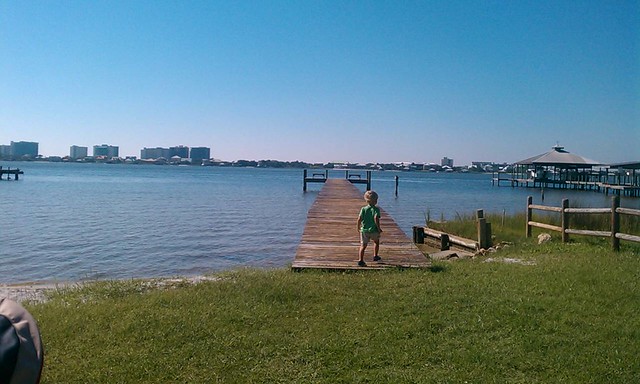 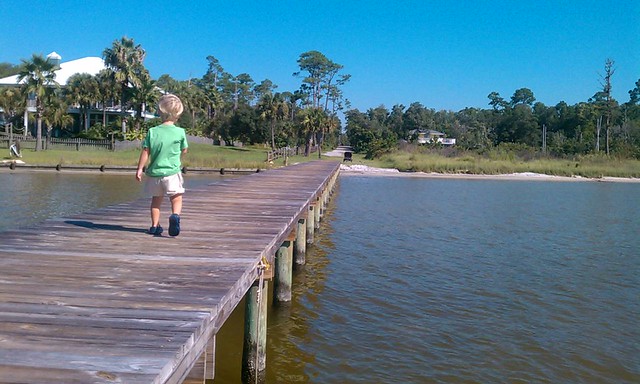 Justin and I have also managed to work in a couple evening dates that we’re also long overdue for. We had a special one a few weekends ago that involved my introduction to the Florabama. We started with dinner by boat to The Point. It is technically in Pensacola but only 10 minutes by boat. 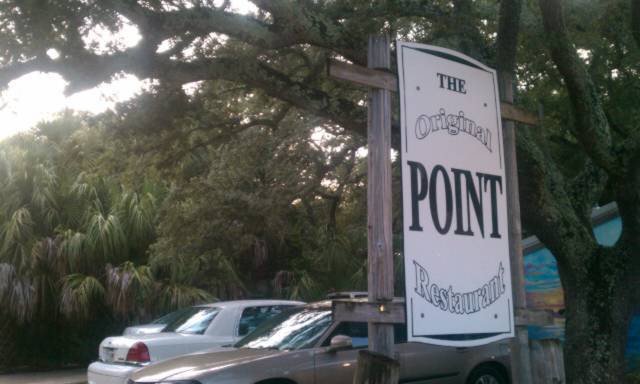 The food was fabulous.  I had Cobia and he had Amberjack… the restaurant is nothing fancy by any stretch of the imagination, but the food was awesome and they had a very talented bluegrass band. It’s kind of like your hometown steakhouse that has really good steaks but will not win an award for ambiance or decor. Somehow when we got there by boat I missed the fact that it wasn’t actually on the water, didn’t have boat slips to park in and that I would have to wade to shore. One jellyfish sting later I arrived safely on the shore and made my way to reserve our table… while Justin anchored the boat in the bay and waded to shore after me. Thankfully we both had on shorts! 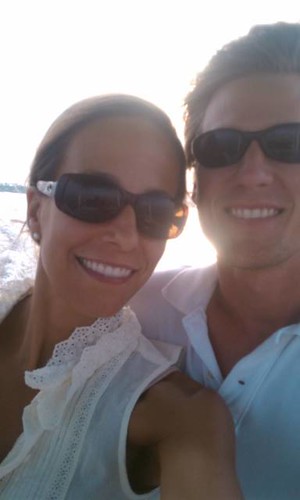 There he is on the boat waiting for his turn to wade… I was on the shore thinking this better be the best damn food I’d ever tasted and our boat better be there when we’re finished. It was worth the wading & the boat was still there. 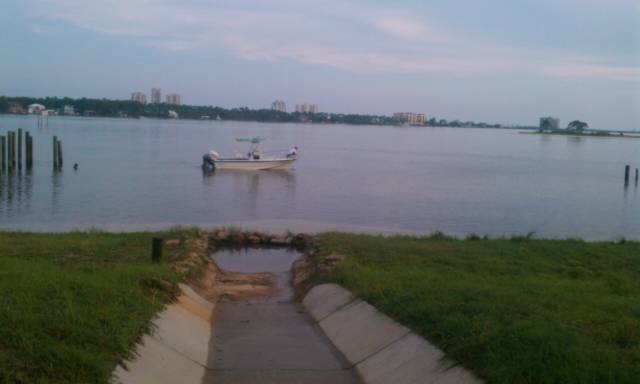 We returned to our chariot and decided that the night was too young and the Florabama was too close. So we headed that direction. I wore a yellow cardigan and carried a big purse. I was the only one in the establishment with a cardigan on.  I think tequilla made their clothes fall off, and if not their clothes at least their undergarments that are strung high above the dance floor. The music was loud but good. I am required to say the music was loud because I was wearing a cardigan. I finally got hot enough to take it off and Justin coerced me on the dance floor… you know a little Zac Brown with your hubby is hard to turn down! We did a fair share of people watching, a little dancing and then called it a night. I told him I’d go back another time and promised to leave my big purse and cardigan at home.

This is Justin paying our cover… please note you must have shoes but aren’t required to wear them. 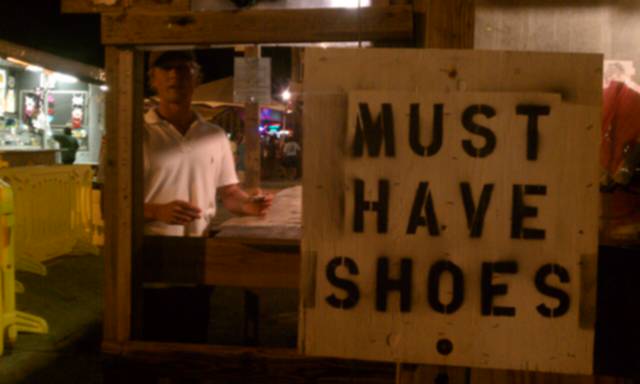 And this is me in the bathroom… Erika sent me a text earlier that day telling me Sloane had been drawing on the walls with permanent marker, I told her it looked like Sloane had been to the Florabama too! Erika is also notorious for taking pictures in bathrooms if she likes the plumbing fixtures and I was just curious if there was anything she needed a closer picture of. 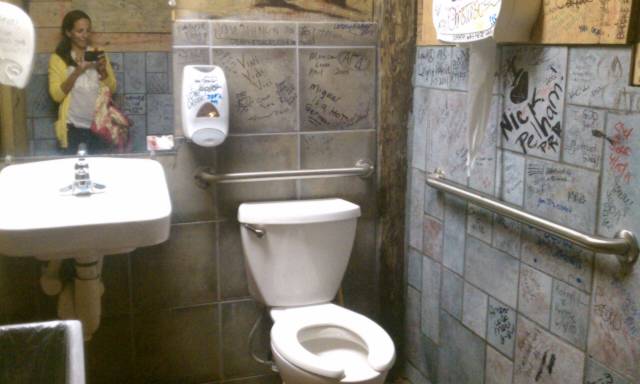 So this is the part of the post where you’re going to wonder why on earth I would ever be sad about moving here… because it’s an awesome place to live. In reality, we really love it, but also in reality, no matter where you move, it’s hard. If we had to move anywhere… I’m thankful it is here! Our local police cars say “Protecting Paradise” and I believe that’s pretty accurate. So we may not have a playground or a dog in our backyard, but if Justin gets off early enough we can hit the islands across from our house and play after dinner. 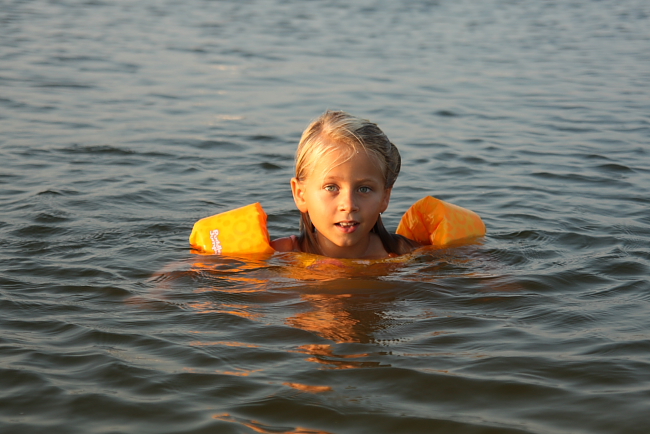 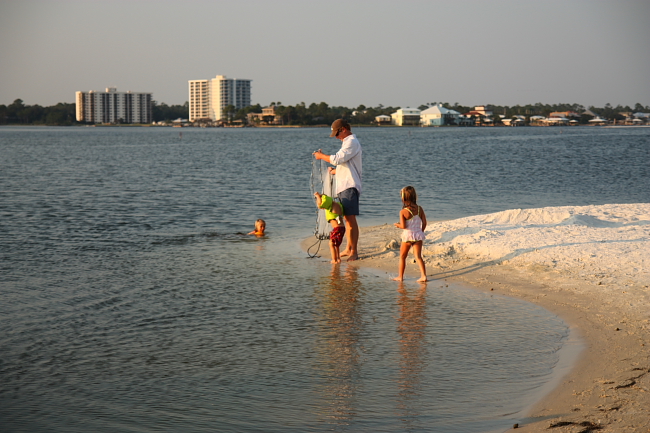 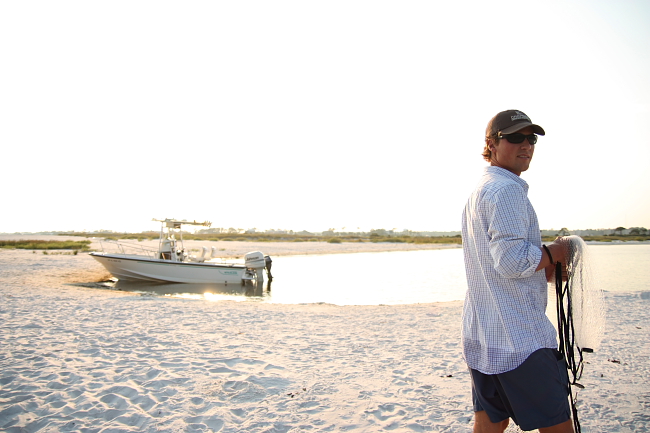 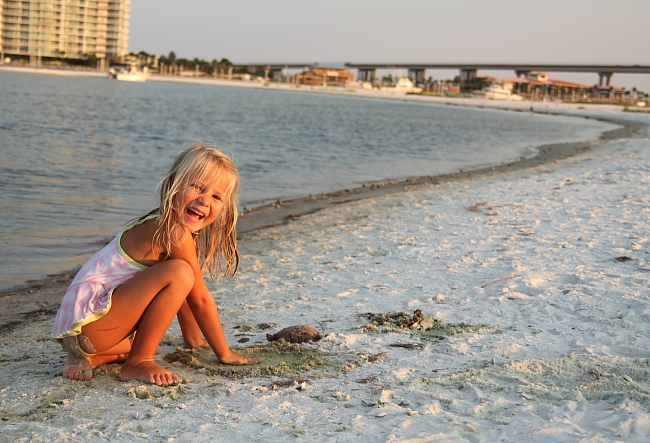 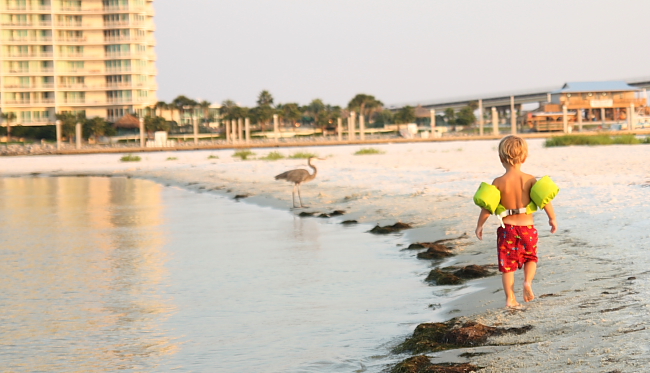 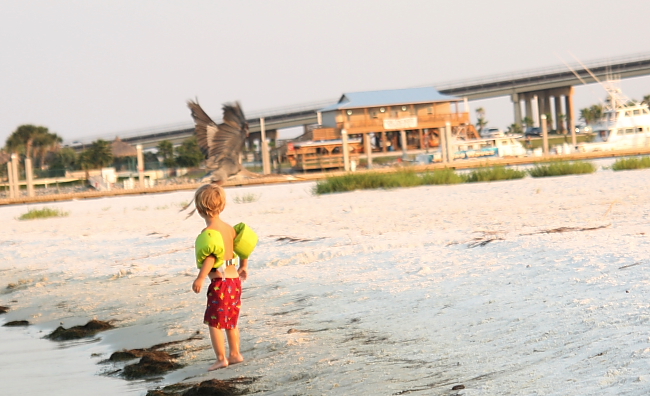 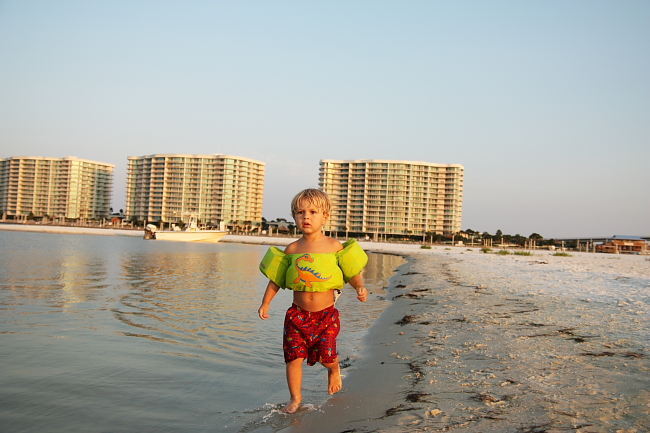 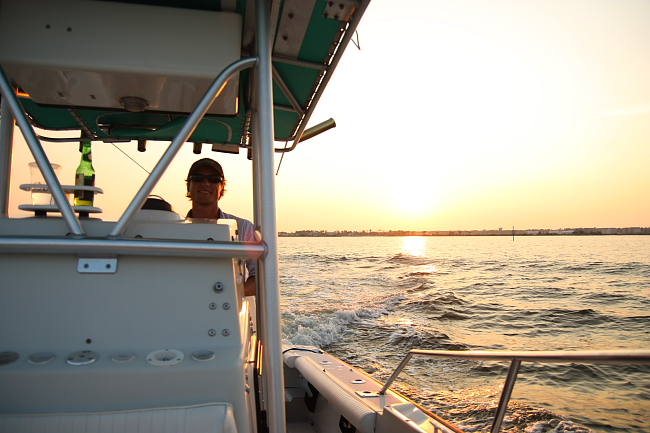 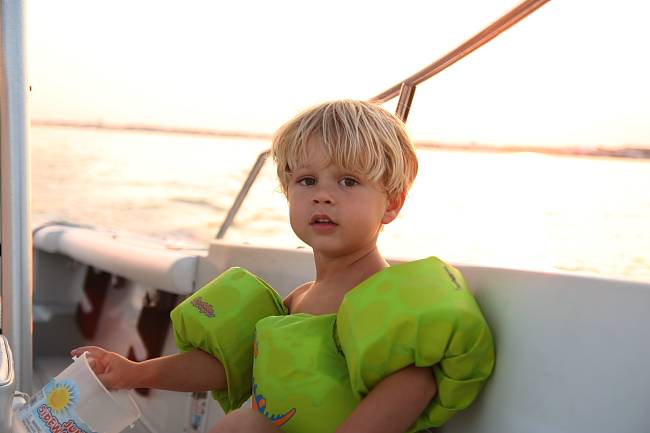 And one last thing before I go… did you see my super talented twin sister in Better Homes & Garden’s September issue? If not, you should pick one up! She has a fabulous spread and I am so proud of her! 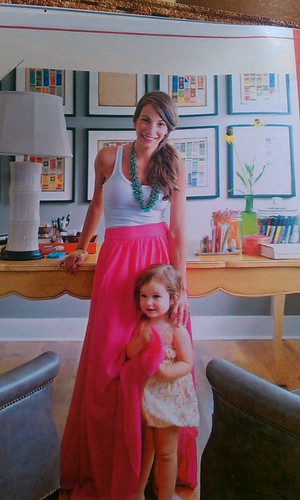