Oh my goodness, all I can say is that it was a tremendous success. I have no idea how many people came through… at least several hundred. Cars were parked as far as I could see in every direction. I’ll start in chronologial order…

Friday afternoon Erika, Chance, & Marla rolled into town with a trailer loaded so full I thought for sure Jed & Granny Clampett were on board. We managed to transfer as much “stuff” from the trailer into the already-packed garage as we possibly could, burning the midnight oil. 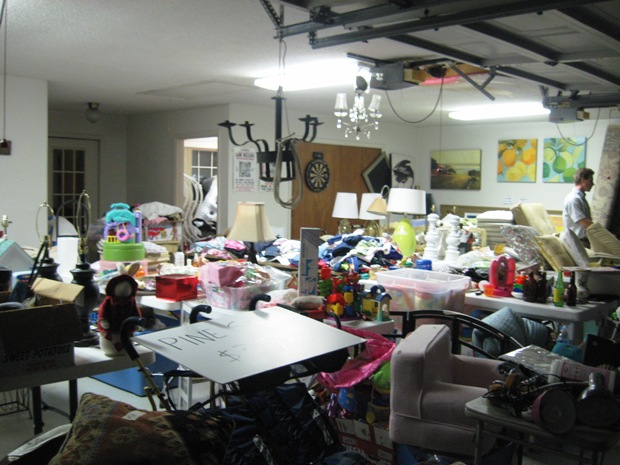 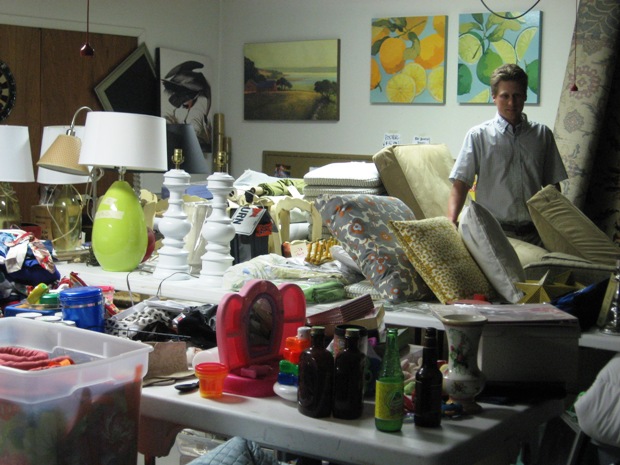 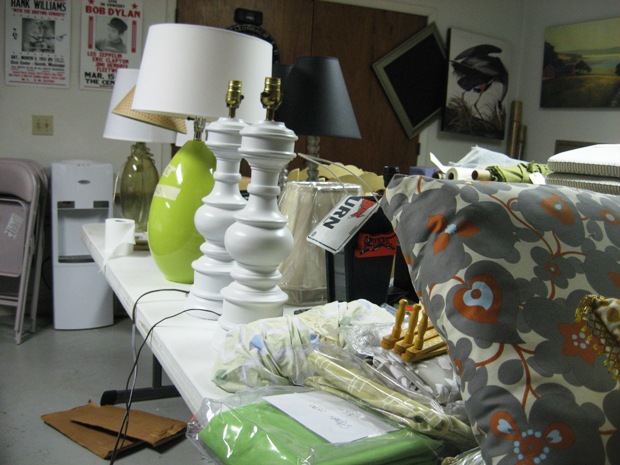 See the lamps up there? I primed and painted them late Friday and prayed they would dry by morning. I’m telling you, paint can work wonders people… wonders! Look: 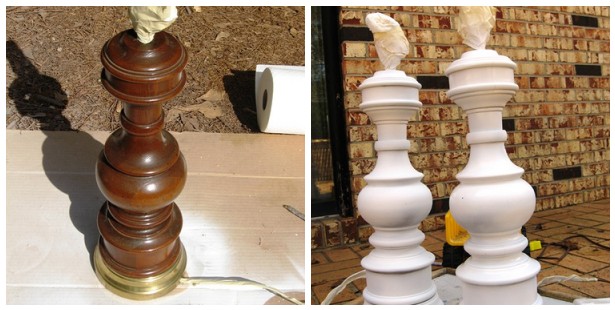 Saturday morning people started to show around 6:15. There was a dense fog and a lot of people. There were some serious yard salers out there, uncovering clothing racks and asking how many more minutes until the garage doors would open. All I could think was ‘how are we logistically going to do this?’… remember, there were 6 participating families and A LOT OF STUFF. We are already strategically planning better for next year. 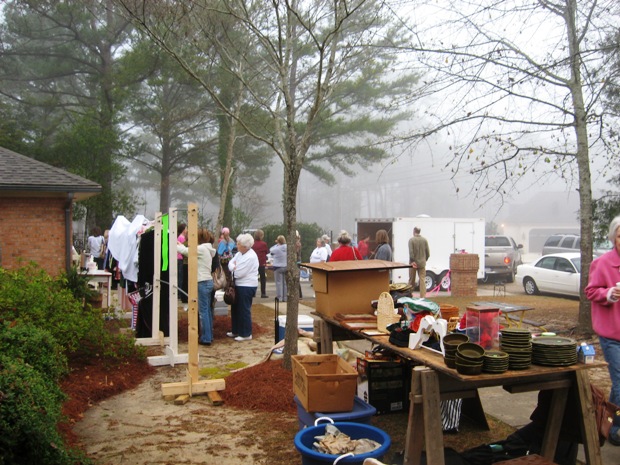 We set up in every direction. We had tables in the garage, in the driveway, down the sidewalk and well into the front yard. It was a progressive yard sale, which made things a little more complicated, and easier for those thieves to get by without paying. We had at least 1 spotted thief and who knows how many more. And to make matters worse… the man came back for more later in the day. Marla and I set our hawk-eyes on him and he didn’t stick around long, we stared him right out of there. No words were exchanged but we were tempted to ask him if he was back to pay for the lamps, shower curtains, and jewelry that he left with earlier. Unfortunately I didn’t get any pictures of him.

Ok, so there were a lot of people and it was a little chaotic at times. 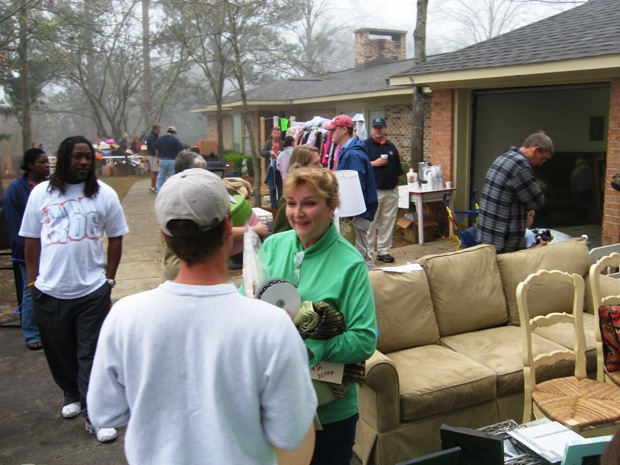 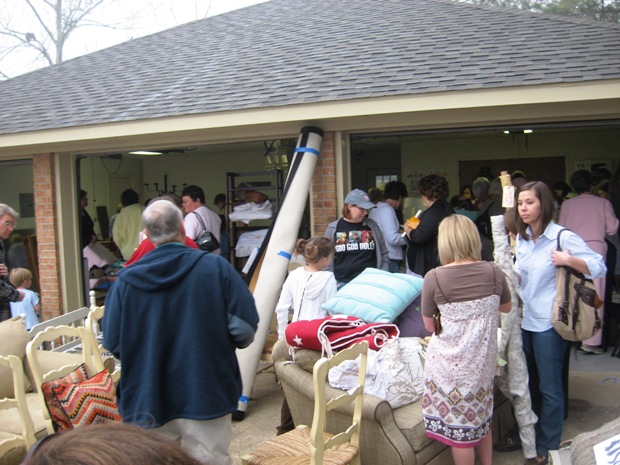 A lot of the big stuff went pretty fast. After the thief left we called in “hired security” to watch over other electronics {and hospital dishpans}. 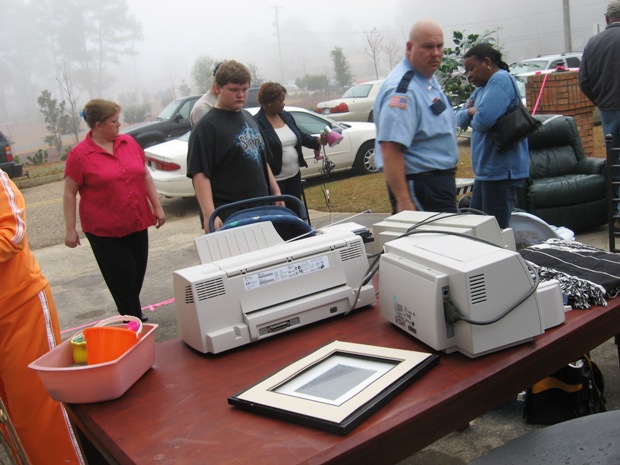 Just kidding. But we should have. Speaking of electronics… Marla and I were in charge of collecting money and somehow we got placed next to a large table of printers and a “mixer” none of which belonged to either of us. We were asked a lot of questions that we couldn’t answer about any of them. Here’s Marla and one man checking out the “mixer”. 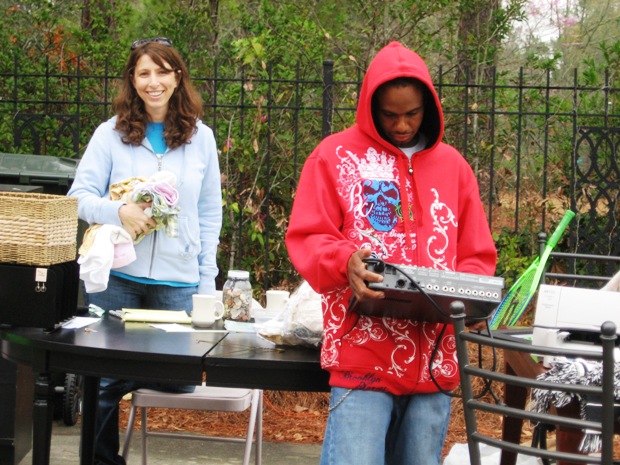 The only “mixer” I am familiar with is used in the kitchen. People would ask, “how much for the mixer, does it work?” I’d look around dumbfounded thinking, “I don’t see a mixer!” Fortunately we didn’t sell it for $5. Come to find out it was worth a lot and went for $50. It was Justin’s brother’s and he was a big “discounter”. He & Dona had a whole trailer full of stuff that wasn’t marked that went really fast due to very deep discounts!

Marla and I handled check-out. Chance was our money-runner. He’d come by for gobs of cash, run it inside and deposit in a basket on top of the frige. Marla made me wait until the very end to count any of it. But occassionally she would offer glimmers of hope and say, “I think you’ve already got your camera!”

These girls are champion blog readers. They came the longest distance and didn’t leave empty handed. 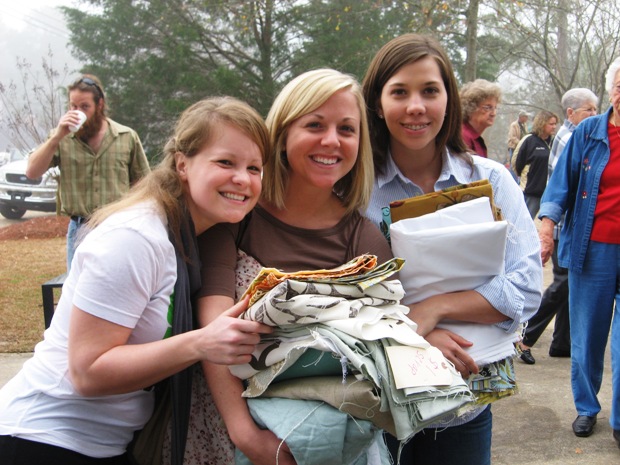 Elizabeth {middle} & Vanessa {right} and I’m a sleep-deprived, mother-of-three, who just had a yard sale and I can’t remember the other girl’s name…? Y’all help me! The hairy man in the background is available Tommy, he wasn’t just here for free coffee… although I see he found it. He is safe and we allow him around our children. He’s growing out the beard and hair to play Jesus in the Easter pageant. Somehow he didn’t know we were having a yard sale and came by for some “fellowship”. To say the least, he was a little astonished when he got here, probably because he had to park 1/2 a mile away. He even bought Marla’s husband’s shoes while he was here. 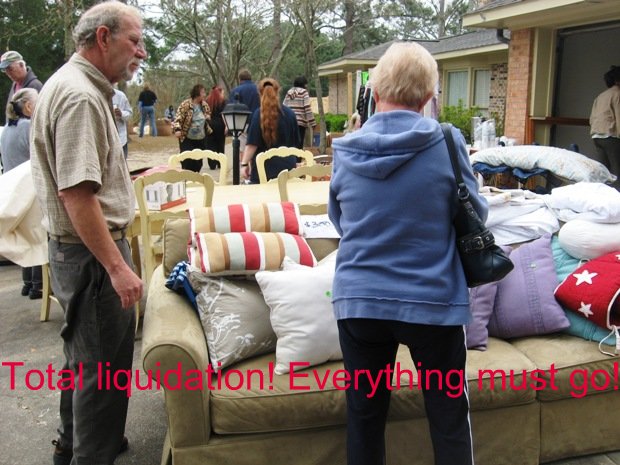 Paiger found something she wanted to buy. 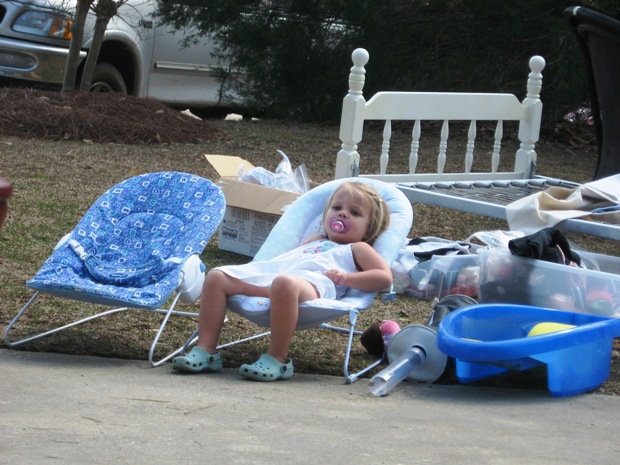 If there was an “employee of the yard sale” award to be given, Erika would be the recipient. She treated every person who came by her “table” like they were a client. This woman {and several others} left and came back for more later in the day. She helped them all with yardages, design advice and more. 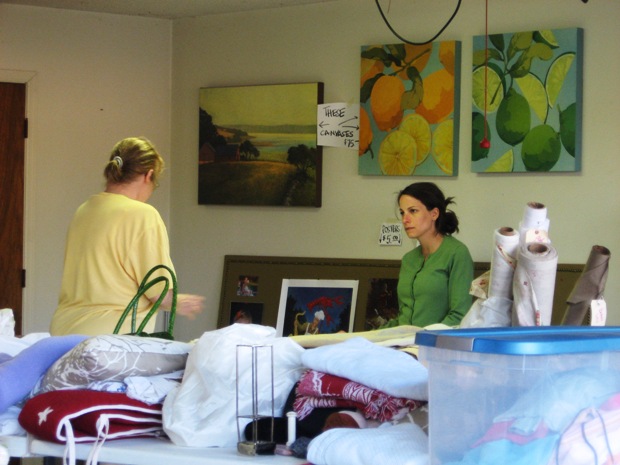 The dogs kept guard and Eufaby {on the right} would go bonkers if anyone got too close to the gate. Like I’ve said before, she looks friendly, but she’s not. The chocolate lab is “Bird Brown”. 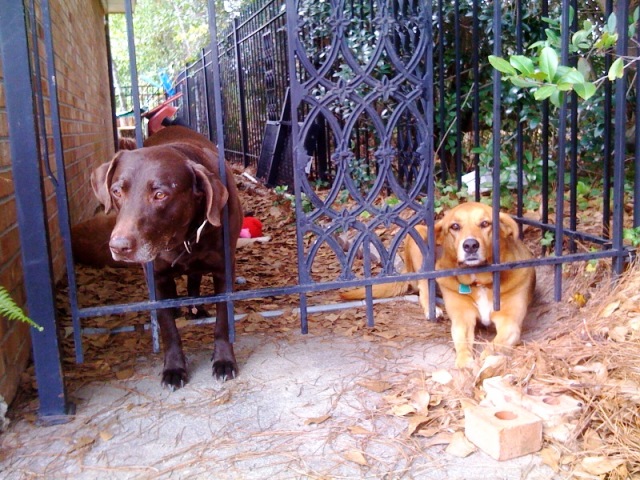 There was one very friendly canine patron, Sydney Ann… a “goldendoodle”. She was a cutie. 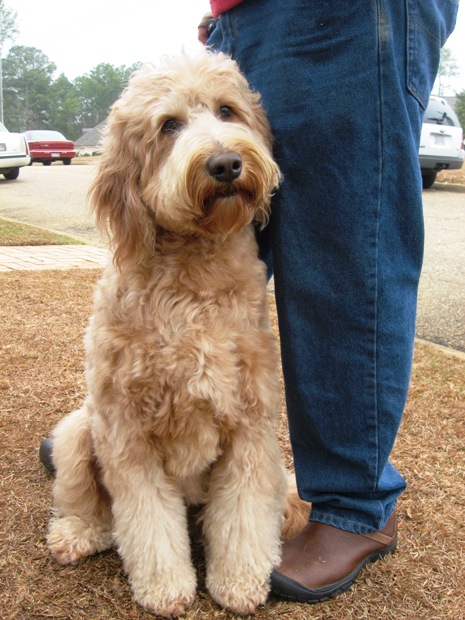 At the end of the day we were all plum {or is it plumb} tuckered out. Here we are {me w/JM, mom, Erika} wondering if someone is going to come over to rub our feet… no one did. 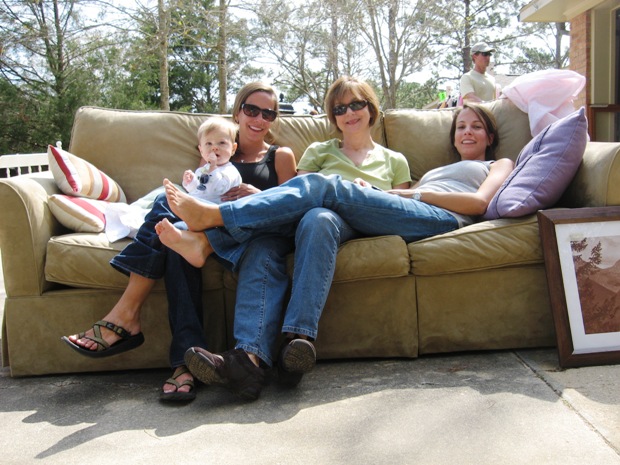 Since the weather was so nice we sat in the driveway ALL afternoon. It was a great day. We made lots of good sales, all got a good sunburn, and we all walked away with a big wad of cash. I’ll get my camera, Erika will get her nursery, Dona will get her sod, and Marla will get her groceries! 🙂 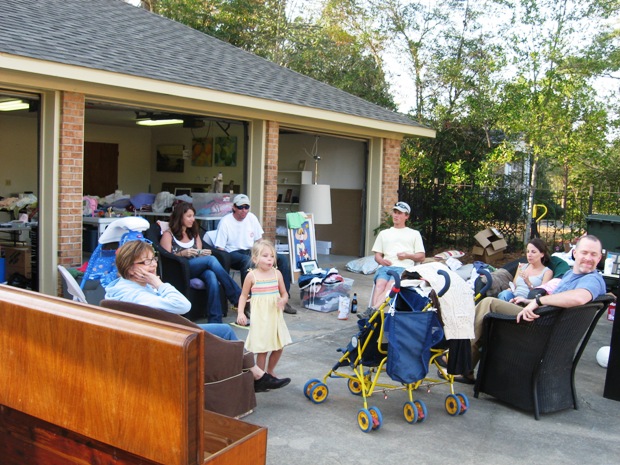 I was shocked that the black wicker chairs didn’t sell! There were several people who wanted to just buy one or two but I couldn’t let a matching set of 4 be broken up. I may just have to keep them for myself.

A huge thank you to those of you who came! It really was so much fun. A lot of work, but a lot of fun. I’m so tired I can hardly keep my eyes open. Hornet had a fever last night so on top of a long day we had a very long night.

I may just leave all that stuff in my garage… it’s already all priced for the next sale! I’m sure my neighbors would just be delighted!

This Is My Father’s World