Hello Blog Stalkers.
Hope this finds you well and refreshed from your weekend. We are still recovering from what I would call a delightfully full weekend! It was comprised of good stuff and good people.
I’ll start with the ‘good stuff’. We did some crafting, swimming, sunning, and sweating on Saturday. I’ve spent many summers in the Alabama heat but for some reason it still surprises me. Don’t get me wrong, I love it. I love to walk out of a cold air conditioned building and feel the humidity hit me in face like a warm, wet towel, but the fact that it can actually be this stifiling surprises me. I honestly think I could bake a cake in the front seat of my car.
Sunday brought the ‘good people’. After church on Sunday we loaded up and headed to the beach to meet up with Erika {& Chance} and a very good friend that I’ve never met. What? Yes. It’s true. Another “internet friend”. One that I knew if I didn’t get down to see it would potentially be a while before we could visit again. Meet Erin. 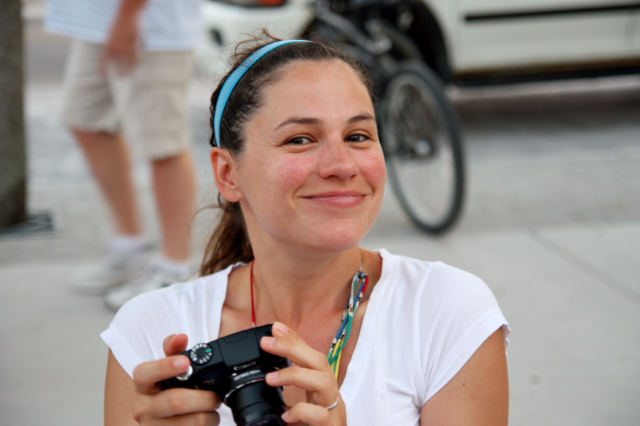 She’s just as genuine, wonderful and friendly as she looks! Y’all aren’t going to believe me, but, this is the only picture I have of her and didn’t get a single picture of us together. My logic is that I must now start planning a trip to Rome so that we can get a picture together.
We’ve sent many emails back and forth across the pond; discussing faith, kids, and chickens. In case you’re wondering, she’s not Italian but married an Italian… and I have not a single picture of him. But don’t fret, I took enough of the kids to compensate for my lack of pictures Pietro & Erin.
We started at the pool. 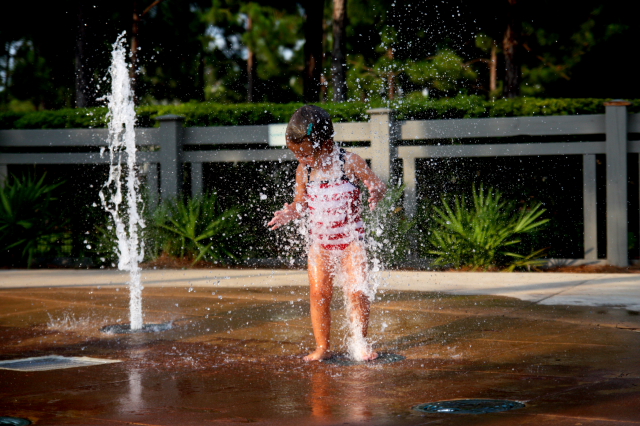 And then made our way to dinner. 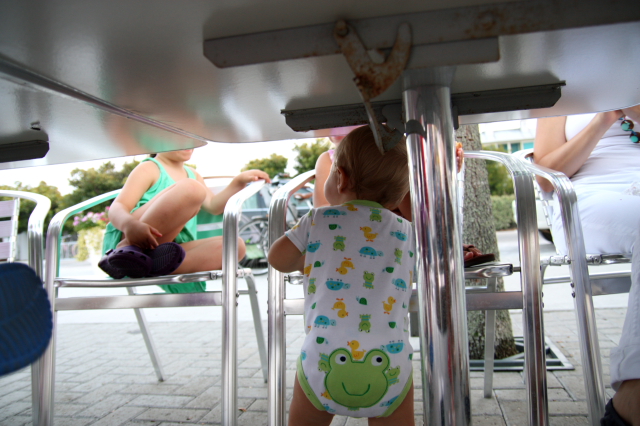 John Martin wanted nothing to do with his stroller so he was free range during dinner. 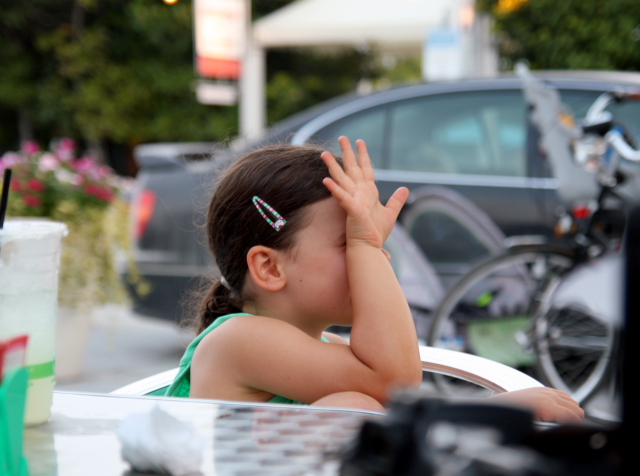 Stella’s mom didn’t warn her that this “thing” attached to my face is permanent. 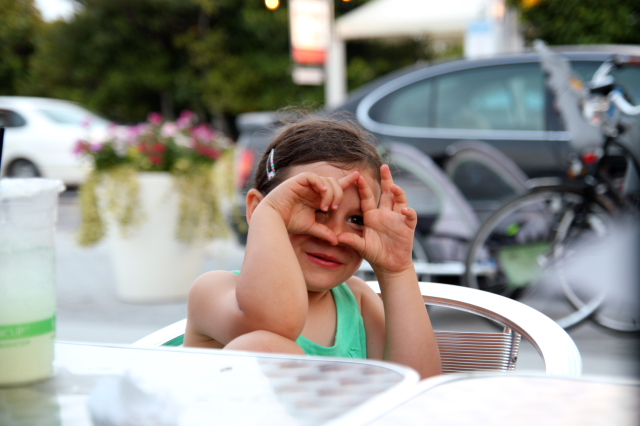 It didn’t take her long to warm up. Erin told me she was like a “diesel engine”, it just took her a little while to get going and then once she did she was good to go! She was absolutely right. I wish you could hear her sweet voice with a precious Italian accent. 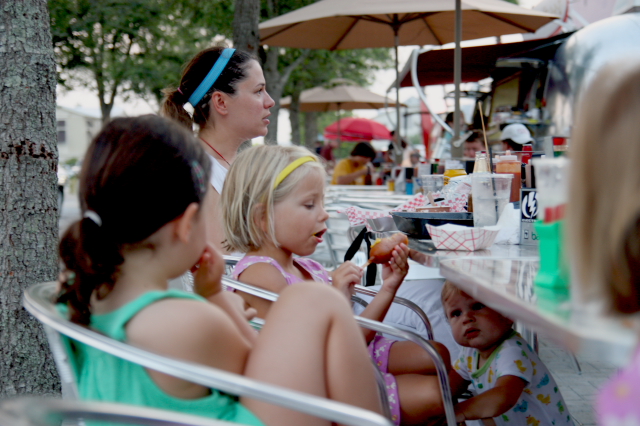 Stella and Morgan are kindred spirits. Once they finished their meal they were ready to play.
Paige, on the other hand, made her way to her Uncle Chance. Who had a tray full of {what appear to be} chili cheese fries. 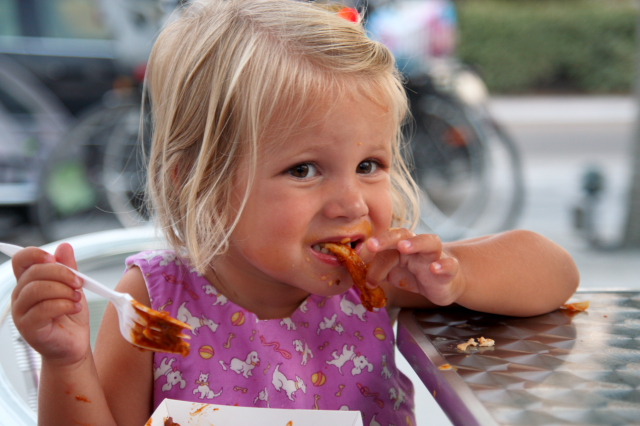 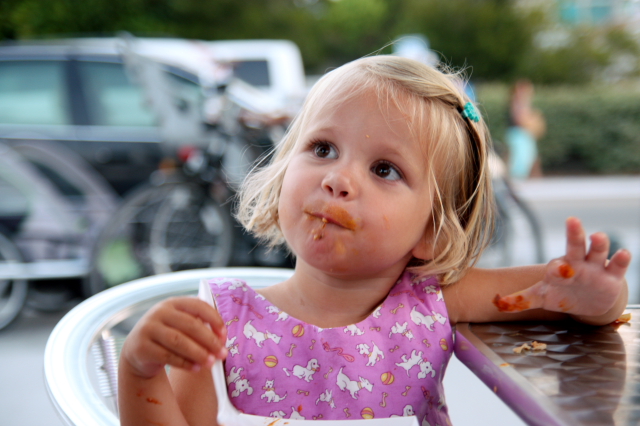 Honestly, as I watched her scarf them down, all I could do was pray she didn’t get “dia-wee-ah”on the way home.
John Martin only tried to escape a few times. Thank goodness he had that very large frog on his bottom… he was usually easy to spot. 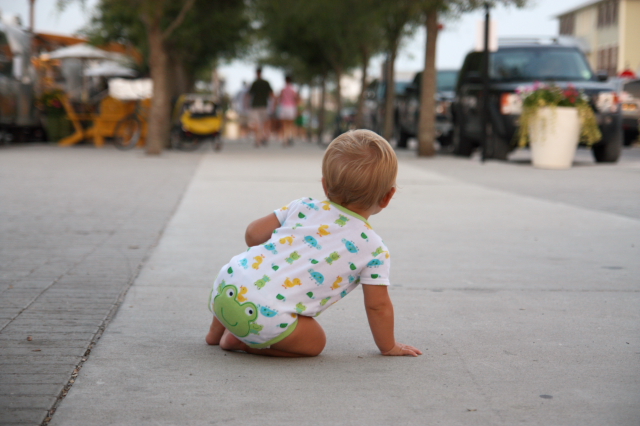 And always came back. 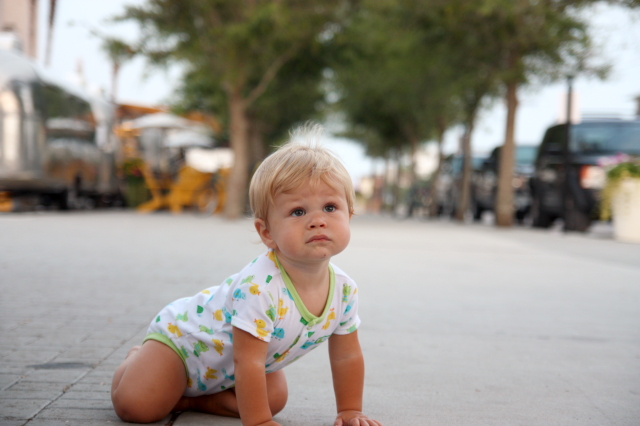 I think I forgot to mention that Stella has a brother, Diego. 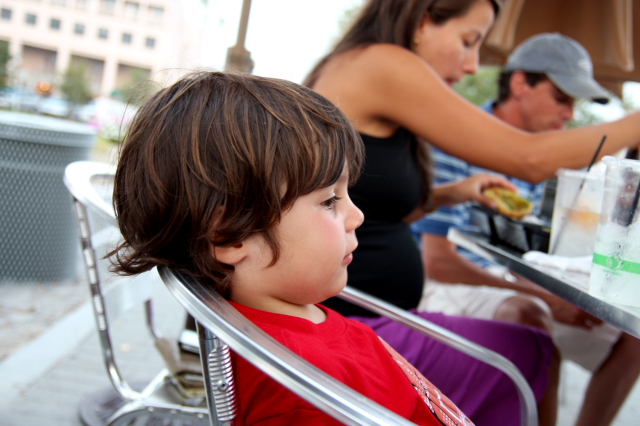 He’s equally as charming as his big sister and doesn’t like rocks in his Crocs. 🙂 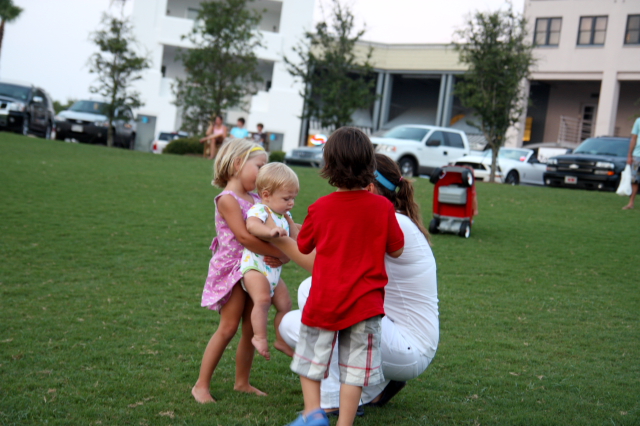 We finally made our way to the outdoor coliseum, where the Romans took on the Americans in a good ‘ole fashioned race. 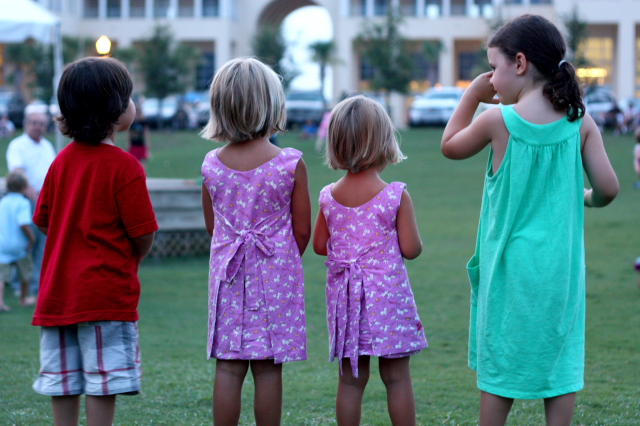 It was a draw every time. 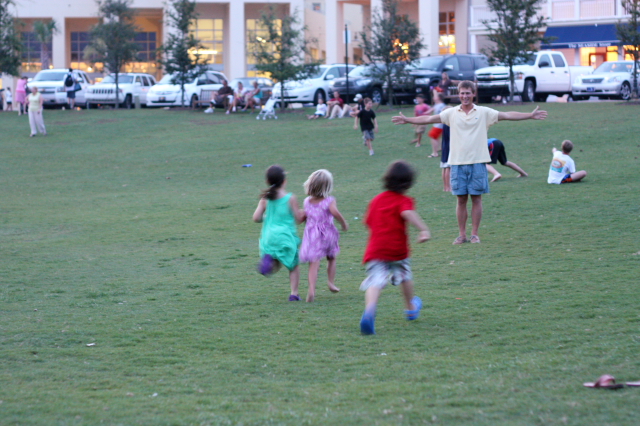 And out of all the races… Paige never ran. 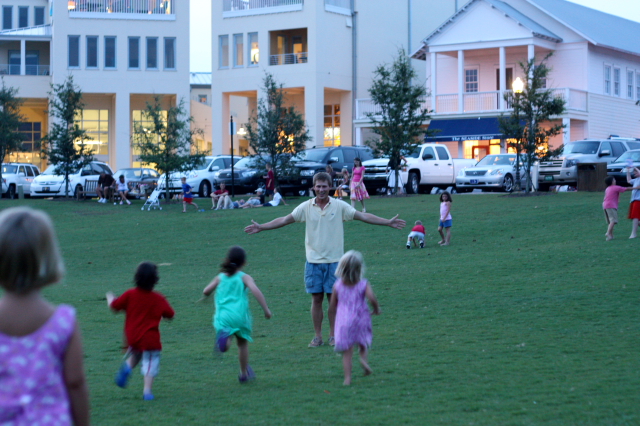 Not once. She’s apparently not up for competition.

But she did run to her daddy as fast as she could and accidently poke him in the eye. 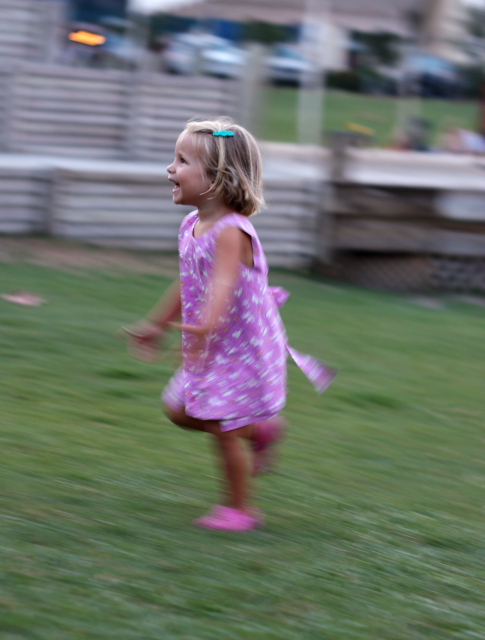 The kids went right back to their food when the race was over. 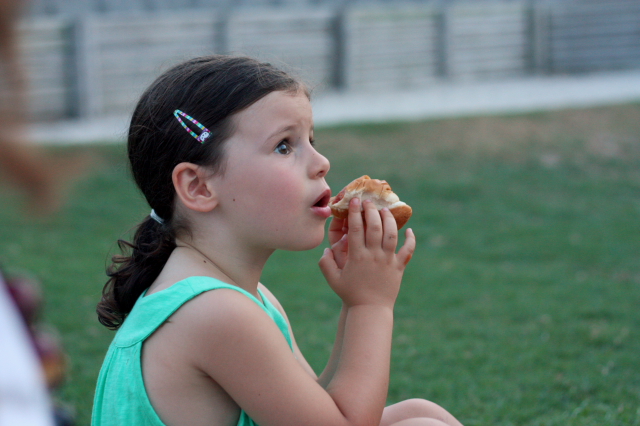 And at half-past dark we headed back to Alabama with exhausted kids and delightful memories. We talked about what a pleasure it was to spend time with our friends from across the globe.

In our small group tonight we sang a song that comes from Psalm 100:4 and discussed things we were thankful for. I enjoyed sharing this story with them and how I treasure relationships not only with old friends but also with new.

Erin & Pietro, it was truly a pleasure and I’m already looking forward to our next visit!

Now, at 11:45 pm I must return to the kitchen to tend to a giant mess caused by this: 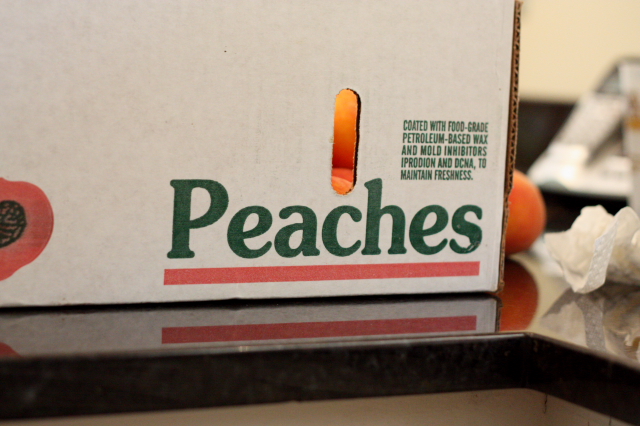 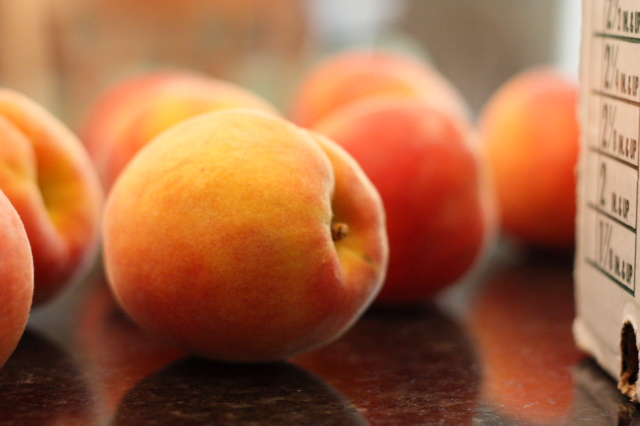 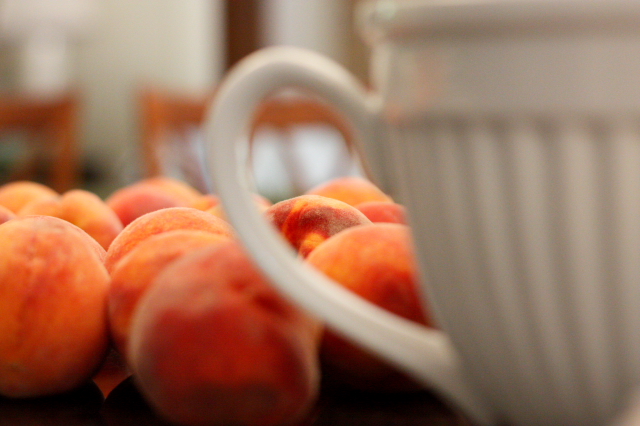 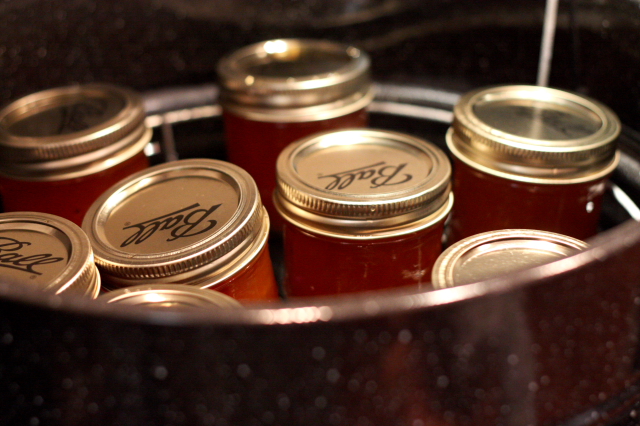 We’ve canned 24 jars of peach jam… and have only worked half way through the box of beautiful, juicy, and sweet Chilton County peaches.

I hope to be back soon!