Hello, it’s been a few days. Last week I intended to blog, but in reality, I just wasn’t up for it. 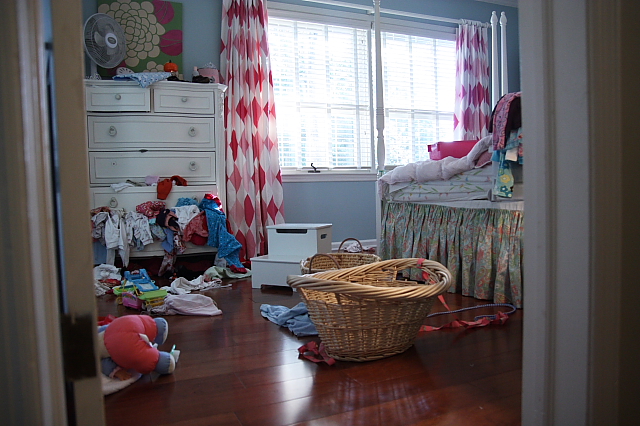 I was having one of those weeks when I struggled for anything nice to say so I opted to say nothing! It wasn’t really that bad, but I was tired, my entire house looked like the girls bedroom, I struggled to find the time to clean it up and when I did, within minutes it looked like it did before I cleaned it. I’m thankful for the Lord’s restoration of my soul, for forgiveness from my husband & children and the reality that I have so very much to be grateful for… because things could be way{as Raiger would say} worse.

I was also planning for our first “real” birthday party. We’ve only ever celebrated birthdays with family. But we decided FIVE would be different and we decided this would be a real party for Morgan, one in which she would be allowed to invite her friends. 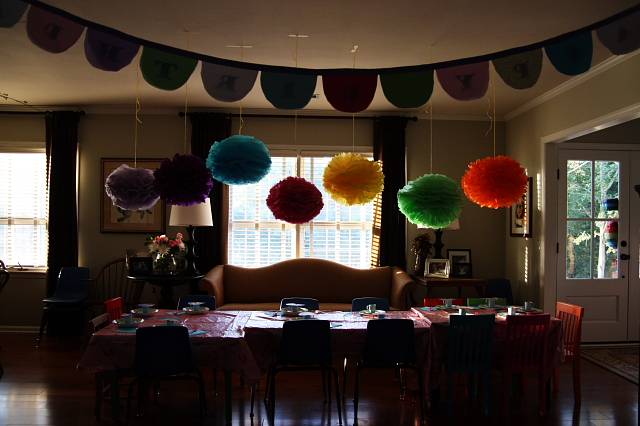 Our theme: tea party. Our budget: small. Our goal: fun. I think we accomplished all that we set out to accomplish. 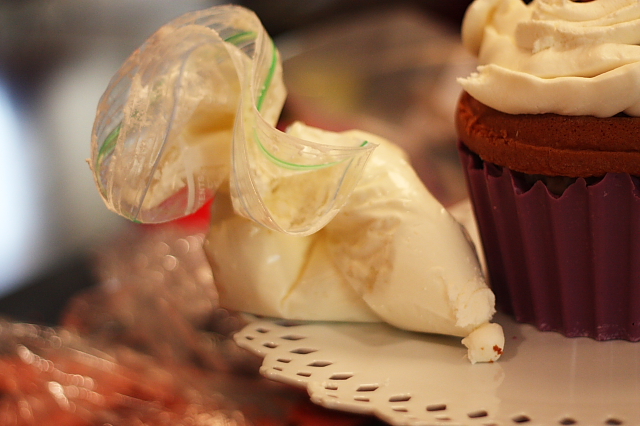 Thanks to kind, informative, and giving blog readers the cakes were a success. I started with the Wilton Giant Cupcake Pan {thanks, Sarah} that I first spotted in the Sky Mall and boxed strawberry cake mix. Last week I made three giant cupcakes and froze the cooled cakes. Thankfully I have very informative readers and I heeded your advice by carefully measuring the batter and placing equal parts in both sides of the greased & floured pan. I also heeded your advice of making “candy shells” for the cupcake liners. They were so fun and colorful. 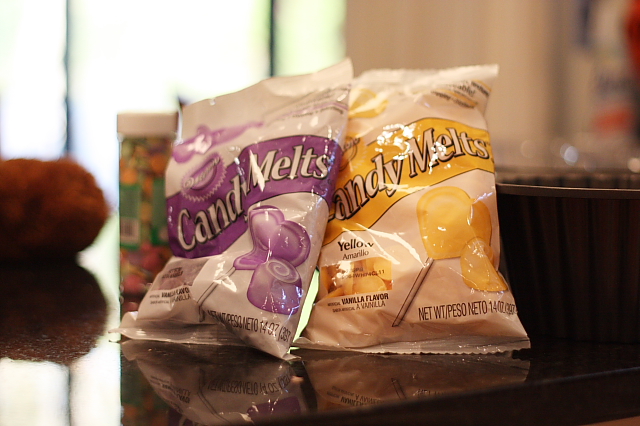 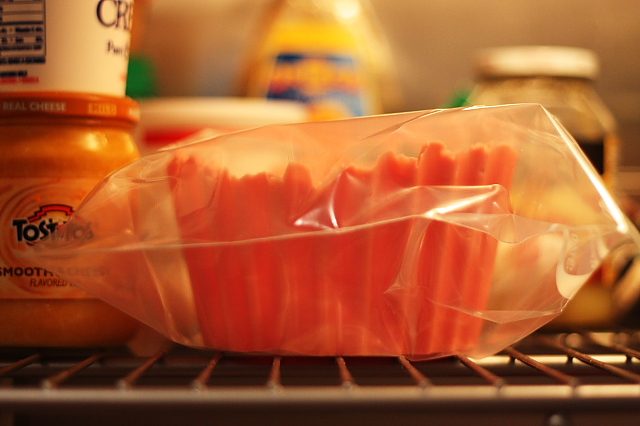 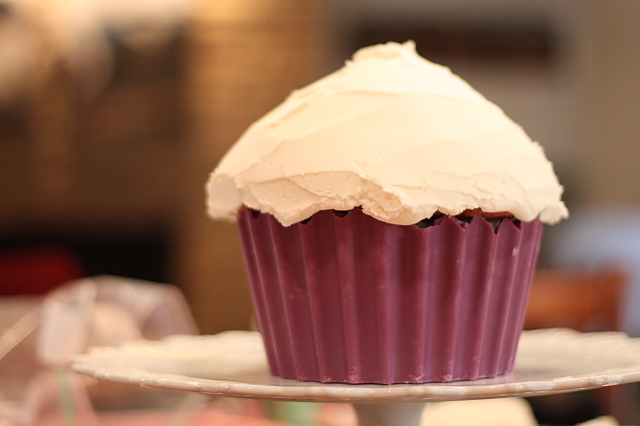 I made butter cream frosting for the tops, used giant sprinkles to adorn each cupcake and topped each with a “cherry” made from powdered sugar, a tiny bit of milk and lots of red food coloring. I froze the “cherries” and as they thawed they took on a glistening shine. It’s hard to tell from the pictures but those cupcakes are enormous {each one is an entire box of cake mix}. 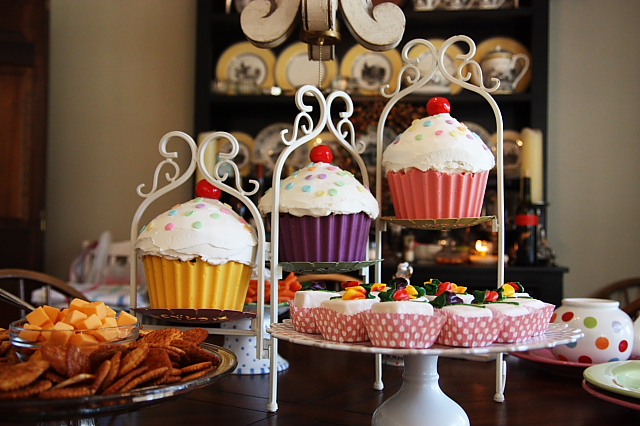 The petit fors were purchased {accidentally– he was sent for a custom order and came home with ones from the case} earlier in the week by Justin. I kept them in the freezer and pulled them out the morning of the party and prettied them up with polka dot cupcake liners from TJ Maxx. 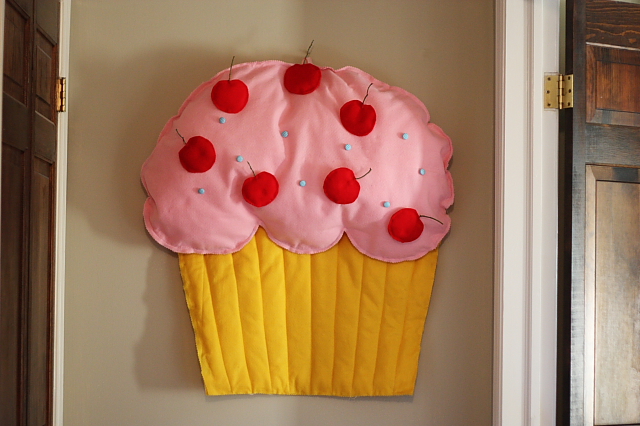 I used felt and batting to make a “Pin the Cherry on the Cupcake” game for the girls. Justin’s aunt  {thanks, Anne!} sent me a precious poster from when her children were small and it served as great inspiration for this little project. The game wasn’t near as much fun as the cupcake itself… but oh well! 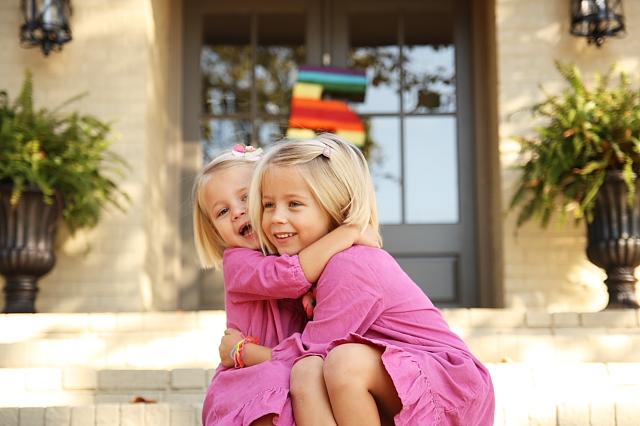 The girls were ready at noon the day before and up at 6 am the day of asking then when the guests would start to arrive. 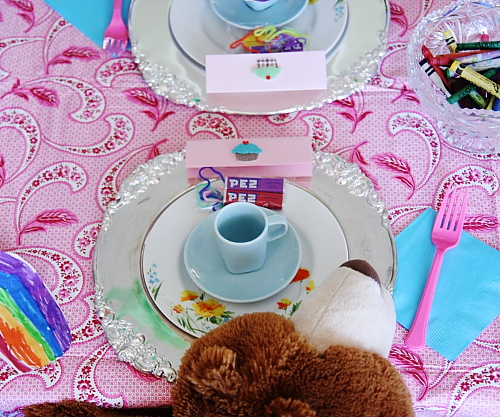 The invitation asked that each child bring her favorite doll or stuffed animal. Morgan made “rainbows” for each of her friends as favors, along with a few animal bracelets and PEZ. The tablecloths came from the clearance rack at Kmart several years ago {thanks, Sister} and I believe were less than $1. The sterling silver service plates were left in the house when we bought it; I figured there was no better time to use them than now! The plates were passed down to me by my grandmother, and the tiny tea cups and saucers {espresso} are  from from Ikea. 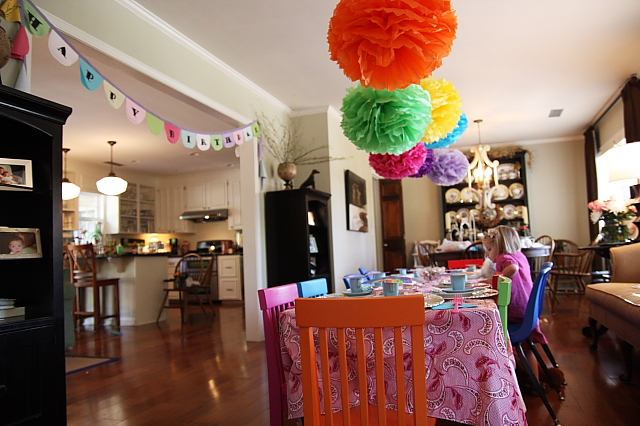 The tissue paper pom pom’s were a fun and VERY inexpensive “table decoration”. I used these directions and made 8 for less than $4 {with 40% off coupon}. The tissue paper came from Michael’s and conveniently came in an assorted pack with 8 sheets of each color {just what I needed}.  The birthday banner was made exclusively from my sewing closet: scraps + transfer paper + prefolded quilt bias= fun birthday banner. 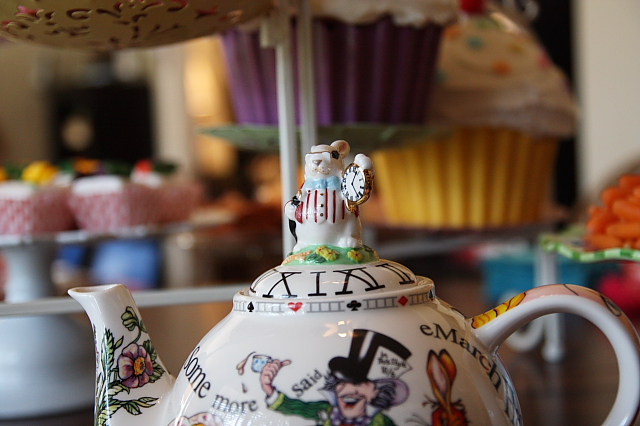 It was only fitting that the carrots be placed on the rabbit cake plate. 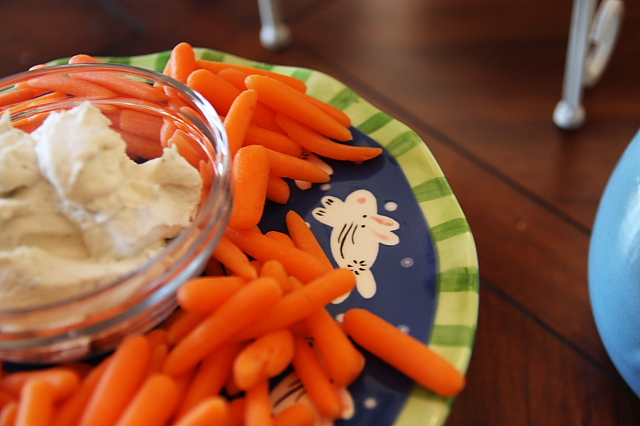 The little girls were so precious, so well-behaved, and loved their peach tea {especially with the sugar cubes}! We were really amazed at how well they sat and chatted at the table. 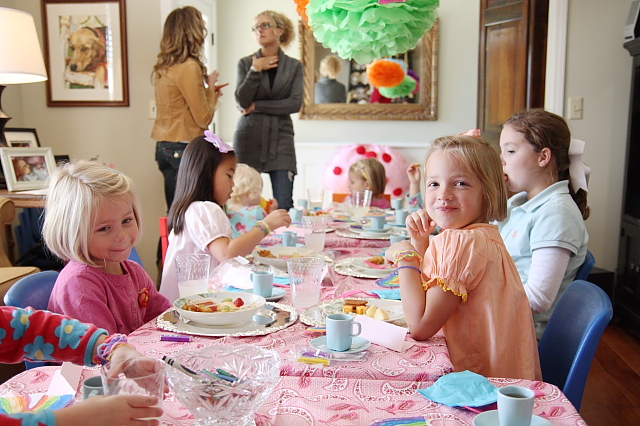 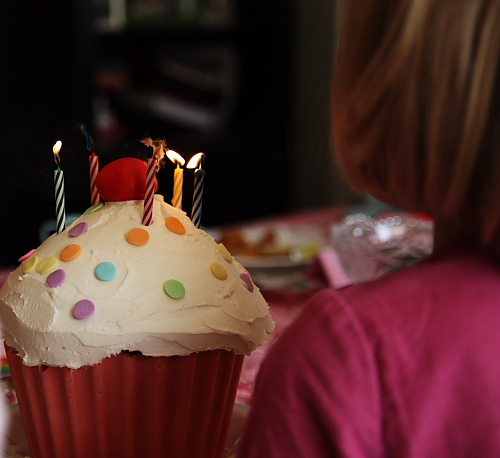 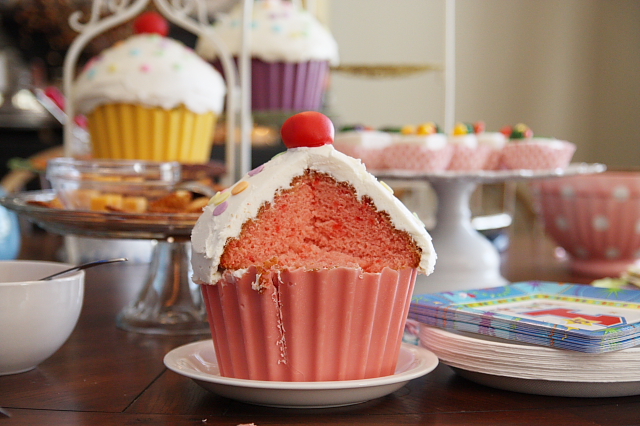 There was only one oversight: cake plates. Thankfully the girls didn’t mind eating off of “Happy 1st Birthday” plates. In fact, Rover was glad he could contribute. We tried really hard to keep him at bay. No such luck. Every time I looked over, he was bellied up to the table reaching for some tea! 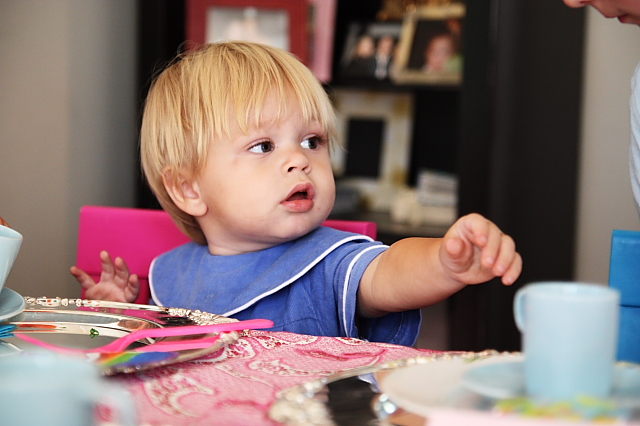 They moved outside to open presents and rake leaves {seriously, how funny that I looked out there and they were all in their dresses raking leaves and jumping in them!?}. 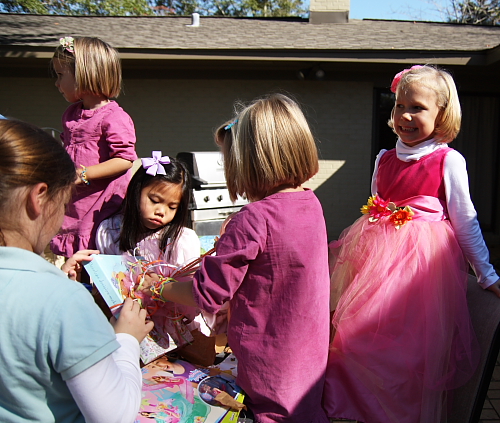 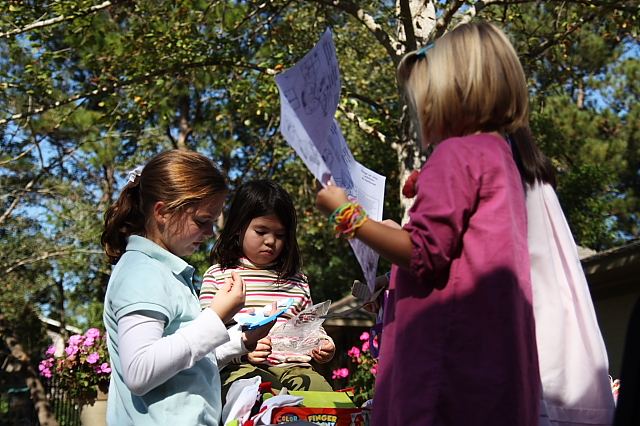 It wouldn’t be party with out at least one of these… every good party has to have one. I was just glad to see that John Martin has some tough competition… we love Mary Aplin and think the two might be a match made in heaven: Mr. and Mrs. Rover. 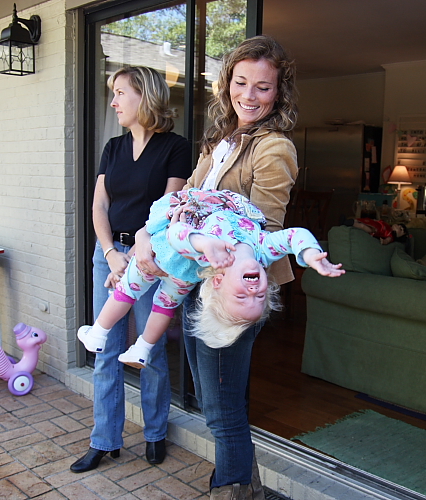 These 3 cousins are close in age {5, 6, 5 respectively} and can be so silly when they get together! My mother-in-law also graciously brought a bag full of fun hats for the girls to play with. 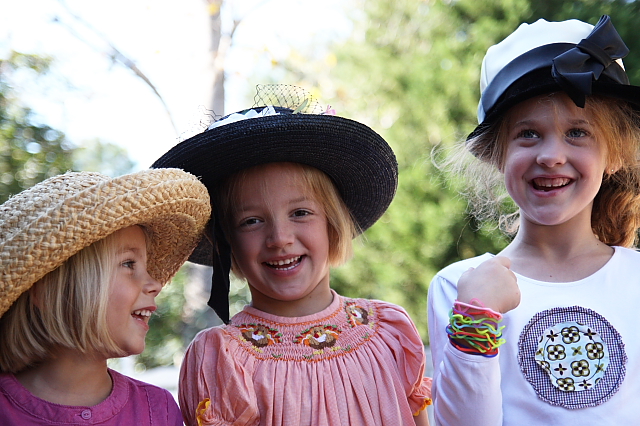 Sweet Morgan, I wish I could articulate the depth of my love for her. 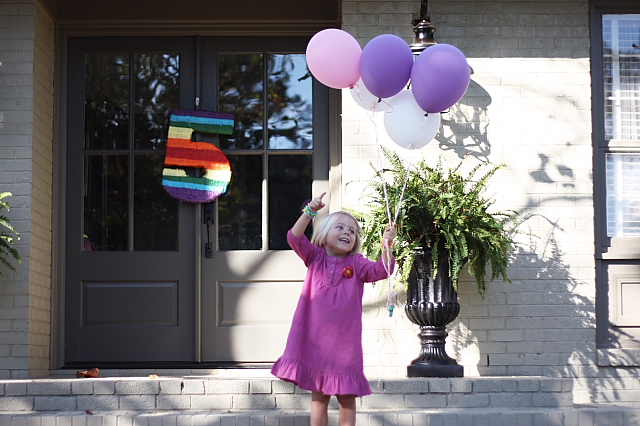 She’s spunky, kind, thoughtful, smart and just started reading the week she turned 5– in my book that alone is reason to throw a party, she is helpful, funny, and I love her with every ounce of my being. 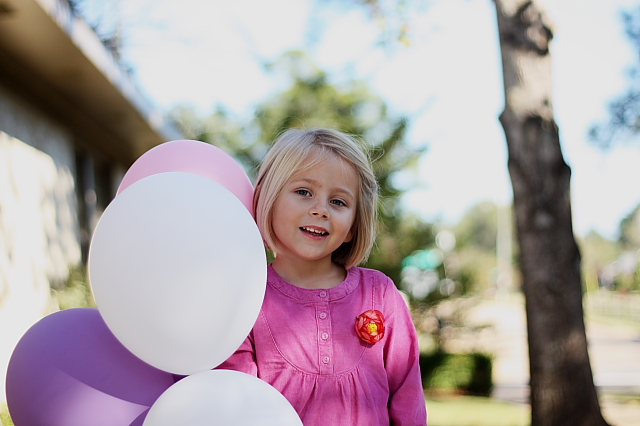 Do you want to know what means the world to me about this child? That she would have been happy with those balloons, she didn’t expect a party with sweets, treats, and friends. I could have said to her, “Morgan, Mommy and Daddy love you with every ounce of our beings, but we can’t give you a party this year… we will go to the store and buy you a handful of balloons!” And to that, I know, she would reply, “That’s okay, Momma!!” I wish more of her would rub off on me.

We were so thankful to have “cousin” George back with us this weekend… he’s always so helpful. We also had the pleasure of taking him to the traveling carnival that’s in town for the annual Nut Fest! Who doesn’t love a good carnival…  we consumed the following: corn dogs, roasted corn, boiled peanuts, cotton candy, funnel cakes, and fried twinkies. Believe it or not no one got sick during the night!!  I hope that each of you had wonderful weekends! I’m still trying to wrap my brain around the fact that I have a 5 year old!

What we’ve been up to…