Here I am again, on Friday night, snug as a bug and it’s freezing COLD outside… even for us way down here!

Thank you for all your prayers for Christina & Brad & baby Austin! For prayers for my grandfather {who’s still awaiting pathology reports}! For all your kind and helpful advice about my back! Those of you who offered to email exercises— I’m all ears eyes {darby@flythroughourwindow.com}. It’s still a hurtin’… but I’ve not been resting, so really by now it would have probably been better… if I weren’t so stubborn.

You all are really wonderful and faithful to think of and pray for Christina. I was shocked at how many of you have delivered early EARLY and have also had HELLP syndrome… this blog makes the world seem so small. Christina delivered baby Austin by emergency c-section on January 6 at 2:02 am. Austin weighs 1 lb 9 oz and is doing fantastic considering his prematurity {measured 25 weeks}. He was intubated yesterday but I just received an email that he is now breathing on his own… what a miracle he is and I see they are clinging to Isaiah 40:31. 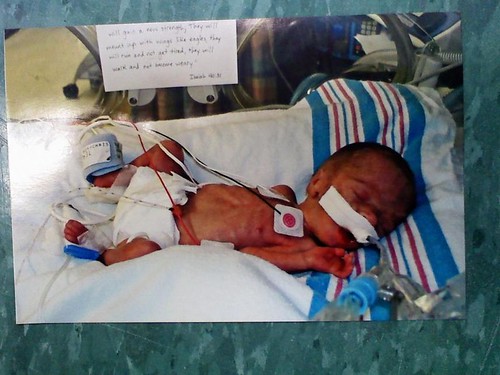 Christina is doing better as well and they are hoping for her to be released in the next few days. Please continue to pray for them as they transition out of the hospital and find temporary housing in Birmingham. The doctors are saying if he continues to thrive they can go home as early as the beginning of March. Every time I look at that sweet TINY child I am so in awe of our Creator who knit together a tiny baby boy of just 25 gestational weeks in such a way that he can survive outside of the womb. A testament to both God and modern medicine!  What a miracle and gift Austin is!! Thank you, Lord Jesus!

Now for the less exciting, more mundane tales of housewifery. Which is all I can bring you today…

My name is Darby, and these pictures will make me look like a BORDERLINE HOARDER.

I purged my closet. WARNING disturbing photos below.

Do you see the little Rover’s head behind the clothes, bless his heart. 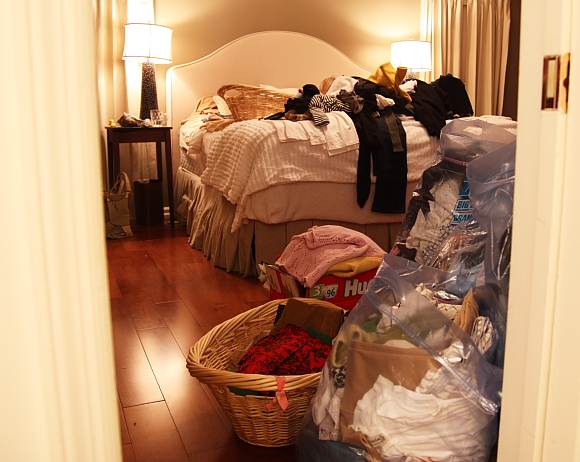 I’ve started on my RESOLUTIONS. First of which was purging my closet. By my very  much TYPE B standards I’m close to being FINISHED as long as I don’t let any TYPE A in to inspect which is why you will see no AFTER pictures but you’ll just have to trust me that it’s better than it was.

But before it got better…. it had to get worse. 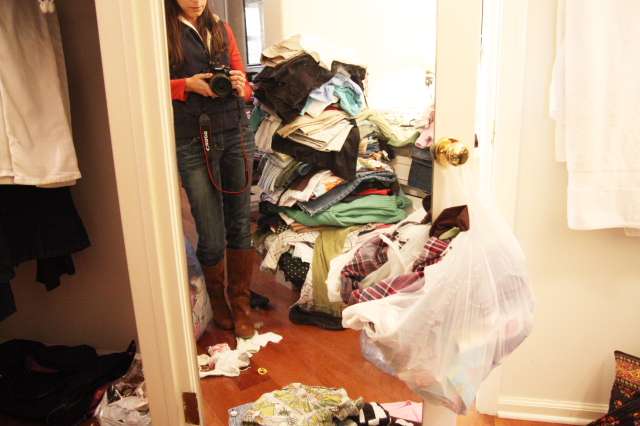 In my defense {and please chime in if you fall into this category}, between 2004 and 2008 I delivered 3 children. That means I have clothing in every size for every season. Not including 2 Tupperware boxes of maternity clothes. Not only has my body felt the effects of pregnancy & breast feeding… but so has my wardrobe. I’m embarrassed to admit that I found clothes that I bought before I got married {almost 8 years ago} and a few things from Auburn. The grey flannel pajamas hanging out of the Target bag came from my sister-in-law 9+ years ago. I called Erika in total shock at the amount of clothes that I had that I DON’T wear and all she would say was “GET RID OF IT! GET RID OF IT! That’s what I do!” Yeah, the only problem is she gets rid of hers and gives it all to me and then I apparently DON’T get rid of it. That one tall pile was only 1/3 of what I got rid of.  Do you also see that I’ve joined those of you who wear your boots on the outside of your jeans? I must confess, at first, I felt a little Robinhoodish but now I’m used to it.

My closet was completely and entirely out of control. I have my sister to thank for the mass quantities of clothing and it would only be fair if I blamed all of this on her. Thanks, Sister. 🙂 And by getting rid of… I don’t mean throwing away. Most of these are being taken to The Rescue Mission— more on that at the bottom.

Getting the utter chaos under control felt good to my soul, however, did not feel good to my back. Which is why I am now wearing a  very wide elastic belt with a rice bag strapped under it. One day I will learn. And you know what? I spent an entire day in my closet and when I finally came out… the rest of my house looked like my closet before I went in. Sigh.

Moving on to more exciting housewifery tales: The girls had their pearly whites cleaned this week at the dentist’s office. Neither had ever been and both had great reports. Paige’s “paci bite” should be closing in more and more every day. I kinda like it though. {Can you tell she was partial to MAMs?} 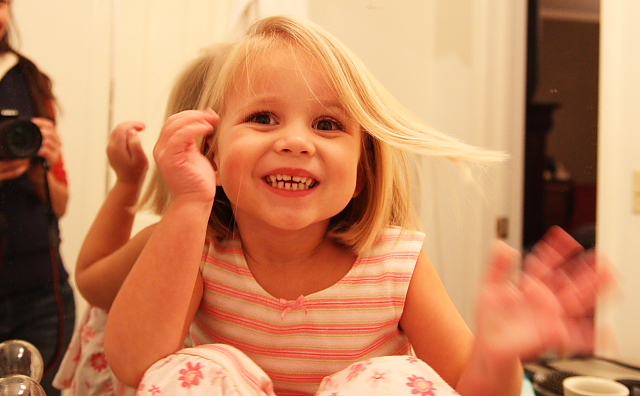 I think it matches her little personality weally, weally well. And I’ve decided she talks like a valley girl… especially her expresions and over use of the word “way”. But she’s the way sweetest valley girl I’ve ever met. 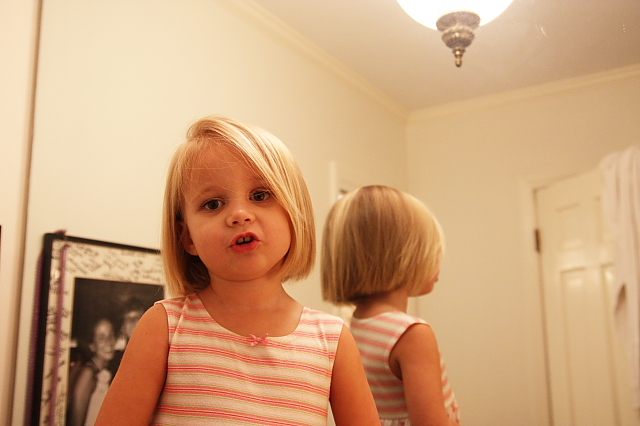 I cut the Raiger’s hair tonight while she watched Max & Wooby. She only asked 128 times if I was almost done. If you haven’t spent much time with three-year olds they’re not the most patient creatures on the planet. But when they talk… they’ll melt your heart. 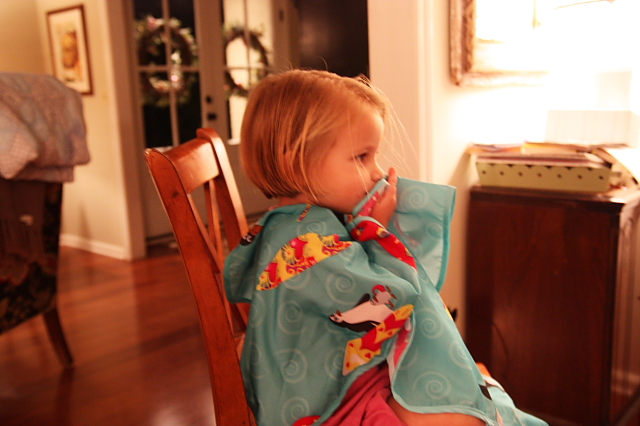 Ok, I think that’s our week in a nutshell. I hope each of you are warm and cozy! I’ll be back soon with special deals from this month’s sponsors!!

Stay warm, Rovers! Stay warm! And snuggle with a rice bag… and whomever it was that said her husband called them those d@#* things… my husband feels the same way. Men are never cold nor do they like to snuggle with rice.

::The Rescue Mission:: I wrote about it here and was there on Monday night. We always like to poll the staff for needs and it is obvious they need more people to serve. But not “serve”, as in, place food on plates. To actually make and provide the food. This month there were only 3 nights marked on the calendar of people coming with food. That’s it… out of the entire month 3 people/groups coming to feed. It really makes me sad. It’s really not a chore at all… it’s an honor to prepare the food and take it there. Monday night I made chili & dessert {others brought rice, Fritos, cheese, sour cream}. I personally spent less than $25 and fed 40 people. I know feeding that many men {and a few women} can be daunting, if you are local and interested email me and I’d be glad to give you contact info or any tips on preparing meals for large groups. I will add this: I do not think it would be appropriate for a group of young women to go serve with out their spouses. For no reason other than I just don’t think it would be wise. We go as a group with our spouses… however, if you are in a group with women and would like to prepare the meal and drop it off before dinner they would readily accept. 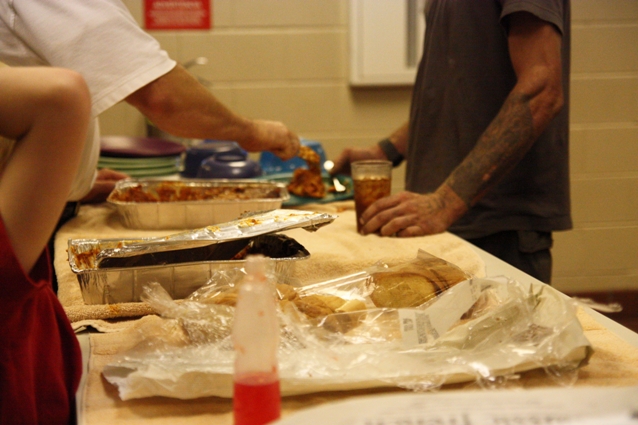