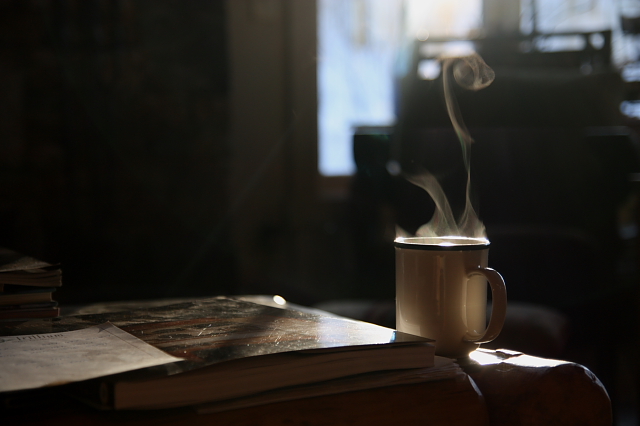 I tend to get this mental block if I don’t blog about something within a few days, so, without enough coffee or sleep I’m going to attempt to recap our wonderful weekend away!

Justin’s parents have a fabulous house tucked away in the Blue Ridge Mountains of  western North Carolina. The house and scenery are both beautiful and we decided this time we’d bring along some friends for fun and fellowship, and we are so glad we did! Seeing as how I was somewhat in charge of the invite list I decided to shake things up and invite some people we know really well and some I’ve only met once! And of course, to make matters slightly stressful, I did a BIG no-no and invited ex’s! Nothing like stressing your friends out before they even come.  They were all pretty good champs about the circumstances and we decided if Tommy was there and things were awkward he could either magnify the awkwardness or be a total distraction from it! Boy, we were right and I’m not even sure which of those he did. But the weekend was great and the only thing you could cut with a knife was the smoke {that was supposed to be going up the chimney}. 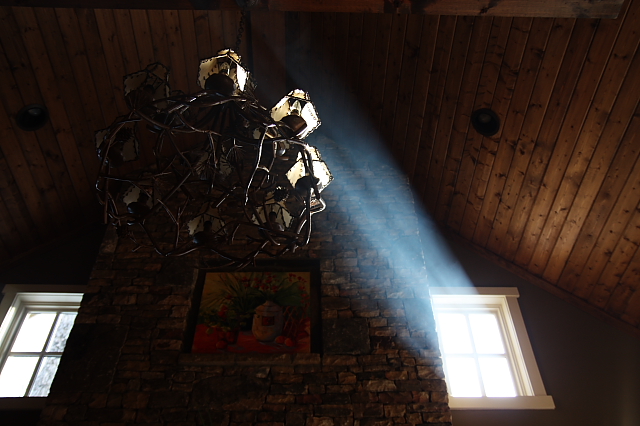 There are just a few things I’d like to subtly mention about Tommy, he loves the Lord, is a champ for spending the weekend with married couples,  is hilarious, and one more thing… 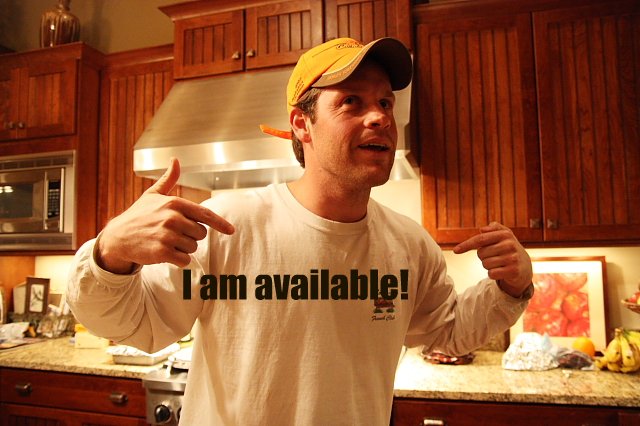 Much to our surprise we arrived to about 10 to 12 inches of snow. 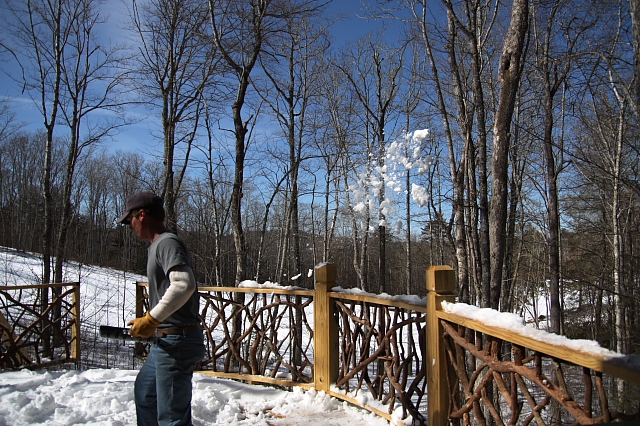 And 10 to 12 inches of snow meant we had to SLED. In case you didn’t know, I’m a total WEENIE! Even when it comes to something as harmless as SNOW SLEDDING. Especially on day one, you would have thought I was on the luge… my brakes were down every run. Poor LA got all the snow spray straight in her face. 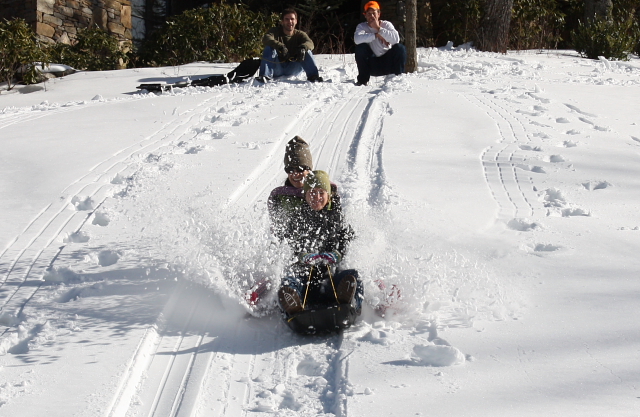 We’d get to the bottom and she’d ask, “Darby, did you keep your feet down?” I would immediately reply,”No way, I’d never do that!” 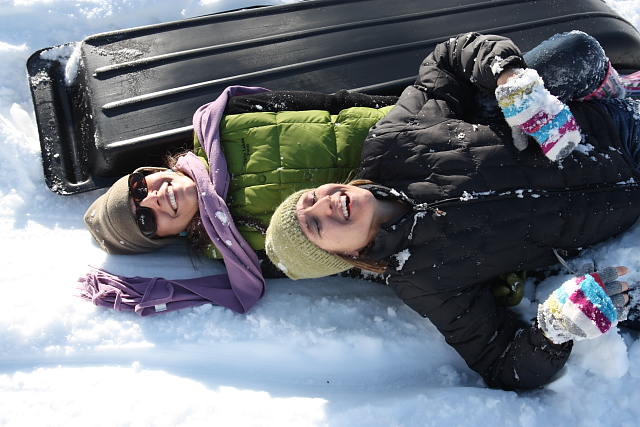 You may recognize her from the February issue of Southern Living, the one Sister was featured in for doing her dad’s house! They left their 9 month-old baby at home and she wouldn’t take a bottle all weekend– I think I would have left immediately, not LA she’s a champion and her brave mother syringe-fed the stinker all weekend so LA & Andy could stay!

More friends arrived Friday night and we enjoyed spending the evening in, eating and laughing really, really hard, mostly about what we were eating. 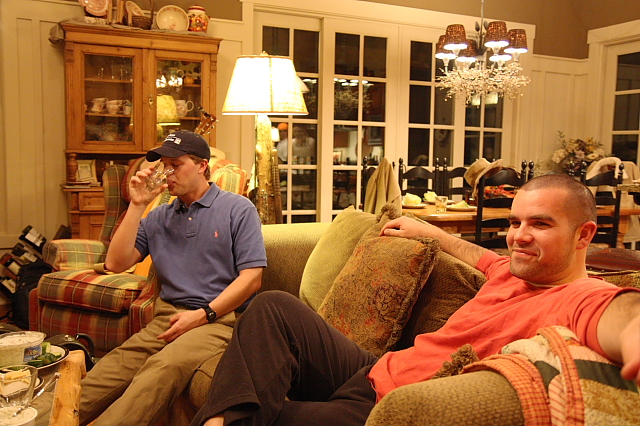 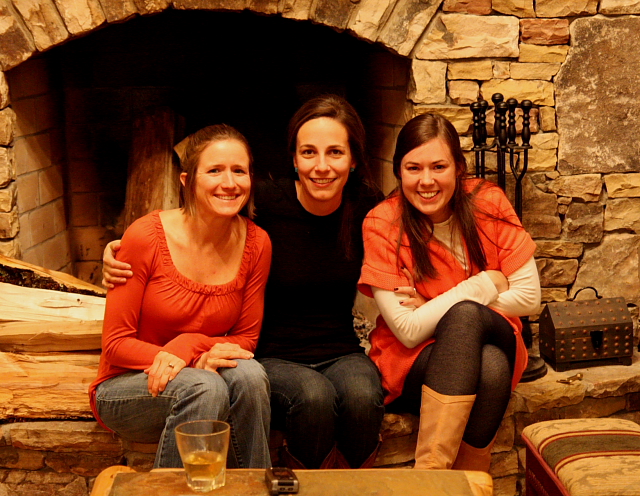 Somehow the laughing never did stop, even at 8 am Saturday morning after staying up until 3:30 am. I’m sure the coffee and homemade bread helped get us moving! 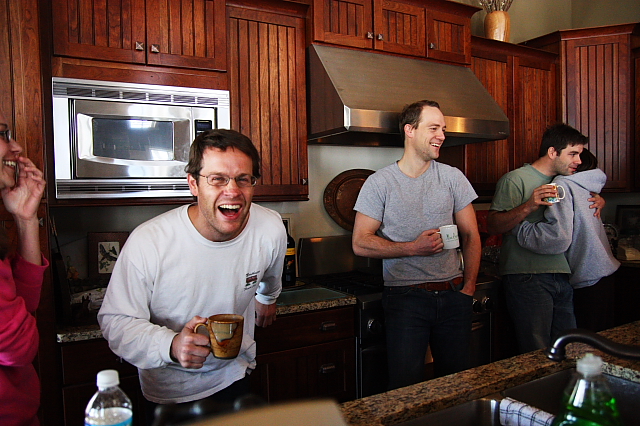 I can’t help but notice that Tommy is still wearing his high school “French Club” t-shirt the next day too. And I’m certain Andy is reassuring LA in the corner that Briley will be well nourished taking breastmilk from a syringe even if she is 9 months old. Or they might just need to get a room… but I couldn’t say that because they shared one with us, which meant the laughing continued until the wee hours of morning— pretty much right before the sun came up.

We headed out early Saturday morning to take to the slopes. As you can see here sledding is a dangerous sport, not only for those on the sled but the innocent bystanders as well. 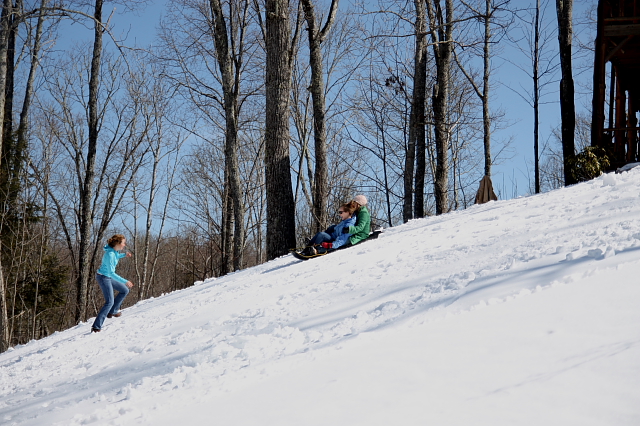 In my defense, we weren’t exactly sledding on bunny slopes. In my opinion, these are the black diamonds of sledding hills. 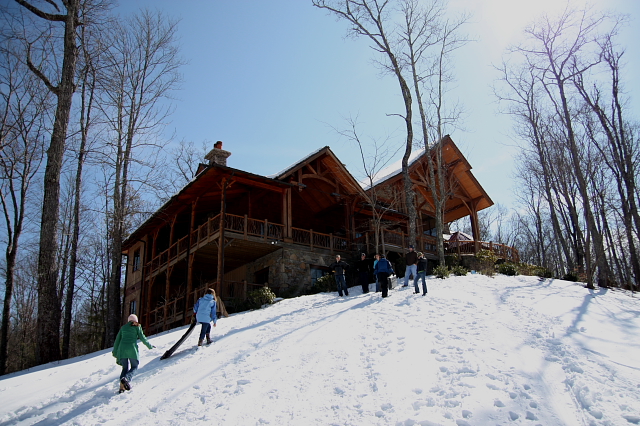 Attention single bloggging women: Tommy would love to capture you on your digital camera.

And I can’t help but notice how overly sympathetic the men were. 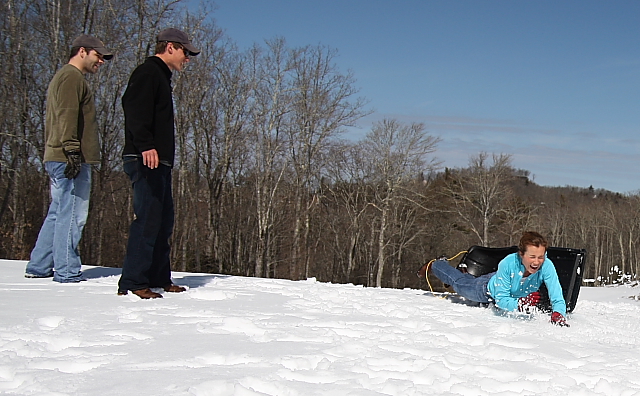 And if you’ve never sledded down a giant hill… 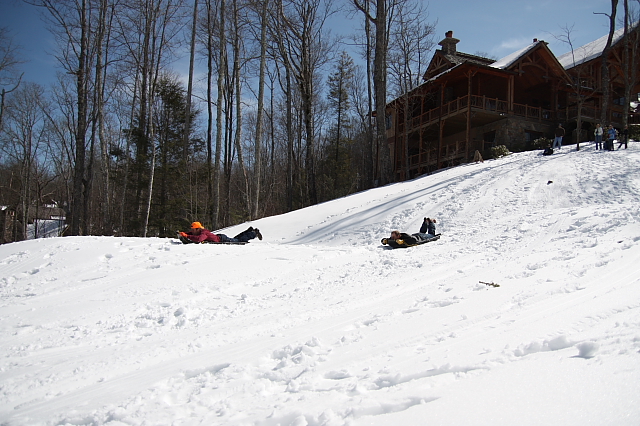 And landed on your face…

you may not know just how bad it really hurts. Take my word for it… sledding {in your 30s or close to it} is not for the faint at heart.

I couldn’t help but notice in the beginning the girls were a little more conservative in their sledding styles. 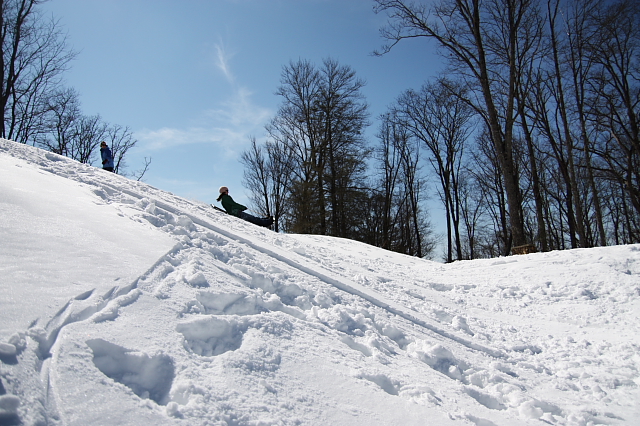 While the men tried to kill themselves. 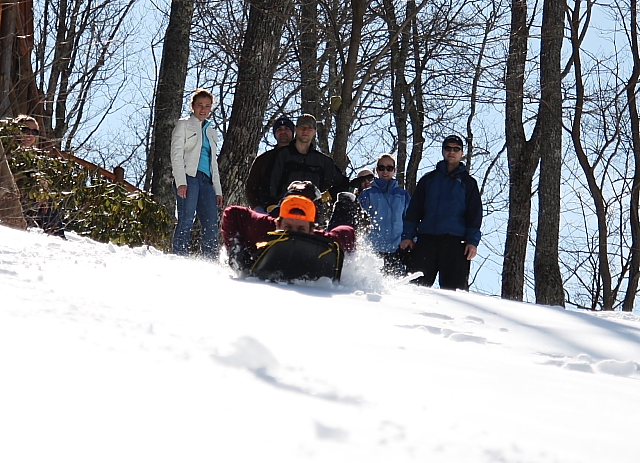 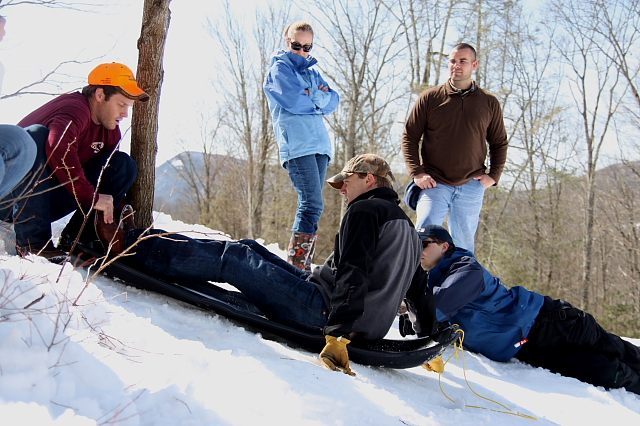 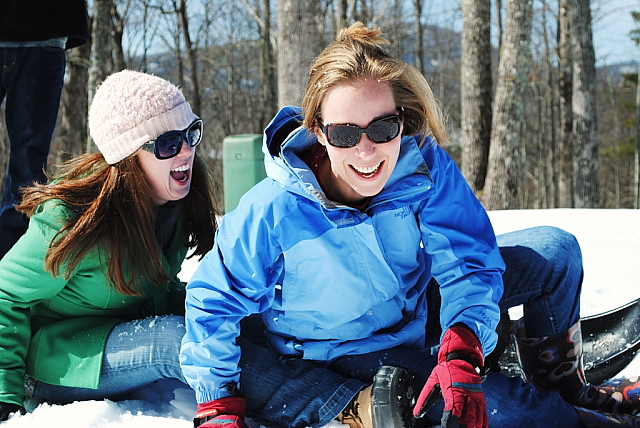 We {girls} also attempted something a little more daring and after a few rougher runs we called it a day. I don’t have a pictures of our more daring runs, but Abby {who recapped HERE} captured this one and this one {which you can’t even see me in because I was on the bottom and too terrified to even show my face!}. After those runs we complained of busted lips, sore necks, heads, shoulders, and coccyxes and retreated to the cabin at {3 o’clock p.m.} for jammies, hot rice bags, wine, chocolate, Advil, and Balderdash.

With a little help from the men we were able to get out Satruday night for dinner at The Orchard, a fabulous little cozy restaurant in town with wonderful food! 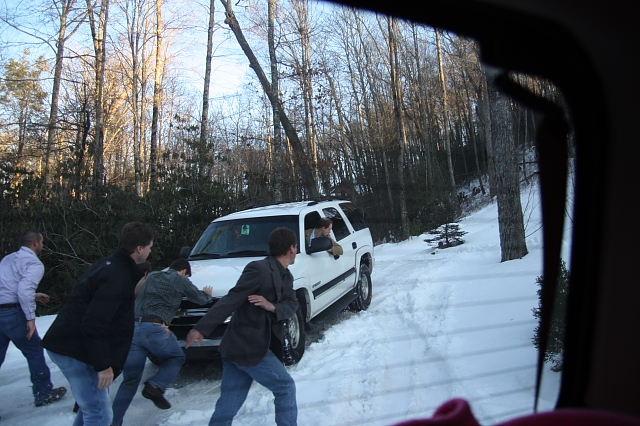 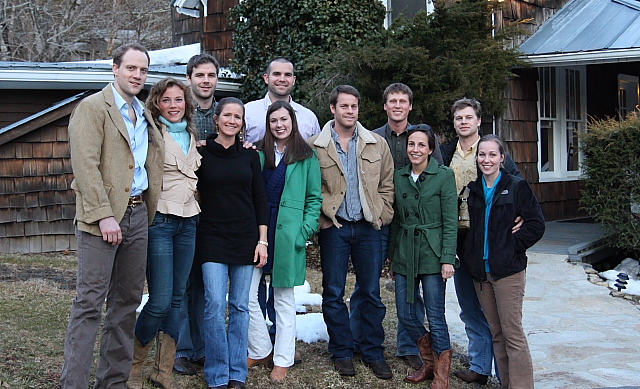 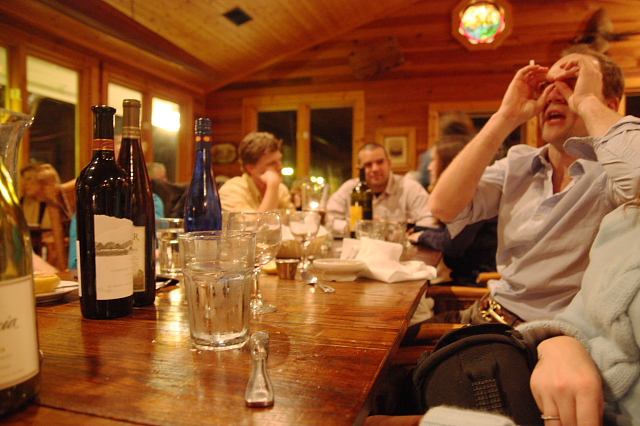 If I can remember correctly, Jeremiah {above} was asking Abby if she brought her glasses with the one broken lens because he wanted to wear them on their drive home.

Thankfully she remembered to bring them. 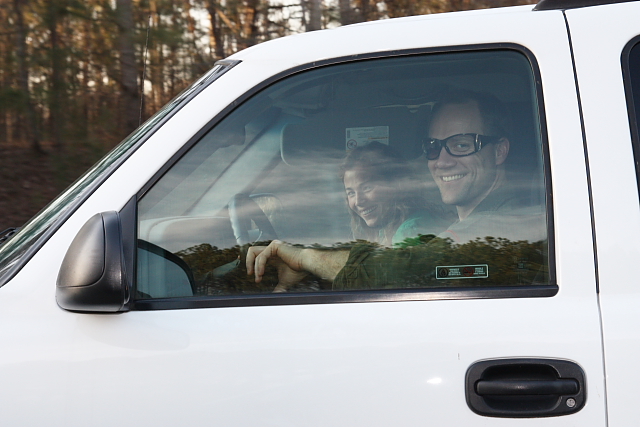 We had an absolute blast and I think it will take me at least a few weeks to recover, first from staying up until 3:30 in the morning two nights in a row listening to the guys play, laughing, singing, and maybe a hint inpromptu dancing which was thankfully not captured on camera… 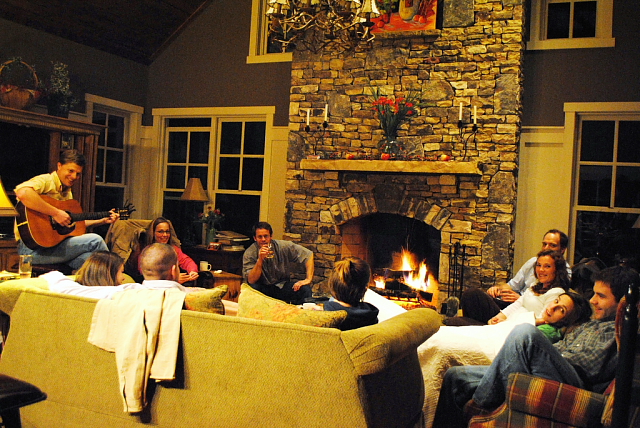 and second from doing this about 100x in 2 days… 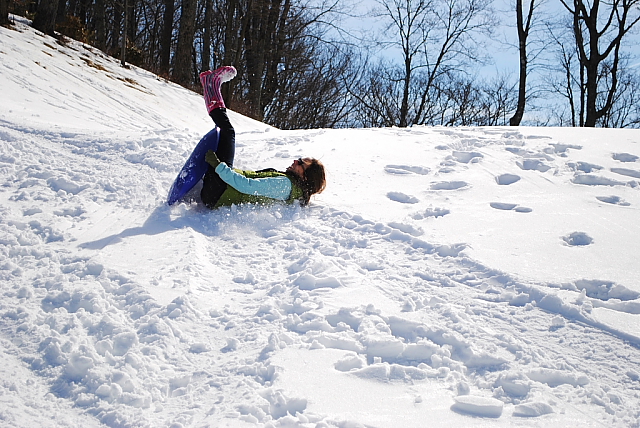 I can’t even gather my thoughts about how wonderful our weekend was. I was shocked that we were all able to pull it off. As a group we left 14 small children at home with grandparents to take care of them {and syringe feed them}. It was so good to just be together in a beautiful place {thank you, in-laws}, laugh together, sing praise songs together, and just spend time together! Maybe one day we’ll include our kids… or maybe not because that’d mean we’d have to share our sleds with them!

It was fun friends, let’s do it again!!