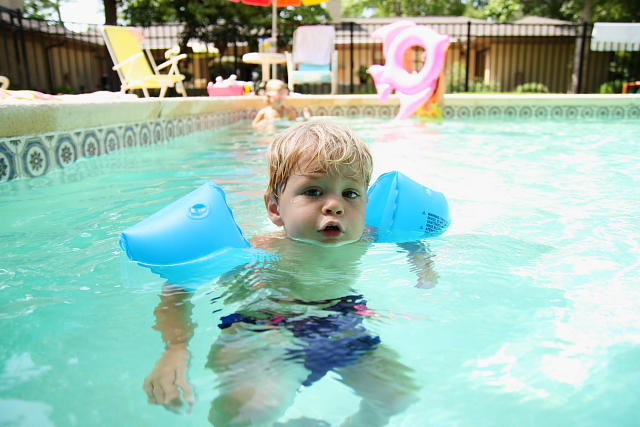 I can’t even begin to tell you how much I love summer.  There’s something about the freedom of summer that might just make it my favorite of all the seasons. Sure, it’s about 103° outside with 100% humidity but I love being obligation-free and I love seeing the kids enjoy themselves outside. I might even love it more as a mother than I did when I was a child. Tonight we spent time with Justin’s brother and sister and their families and of course we talked about school and how the children will all be starting soon… none of us seem to be ready and I’m just so thankful to have another full year with 1/2 days before Morgan starts full-day 1st grade next year. 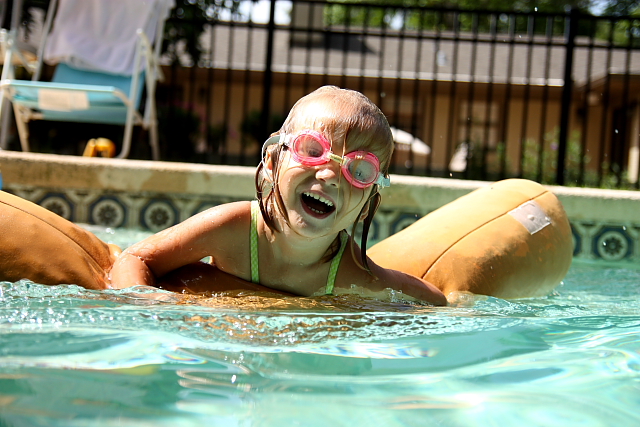 Anyway, I digress… Paige has mastered swimming. “Mastered” may be too strong of a word but she has certainly improved and can swim from the shallow end to deep end completely float-free, sporting her way cool goggles, and coming up regularly for breaths. We are so proud of her and she gets a little silly when we make a big deal out of her. She has attempted numerous times to go after diving rings but she’s so buoyant that she can’t get to the bottom to pick them up. I found myself so tickled as I watched her kick her legs and squirm around, giving it her all to get down there… over and over again. I finally caved in and gave her a little push so she could reach them!

Little Martin Man on has come to grips with the fact that we insist he wear his “water wings” when he’s in the pool… and he has fortunately obliged.  If we had another month or two of summer I’m almost convinced I could teach him to swim! 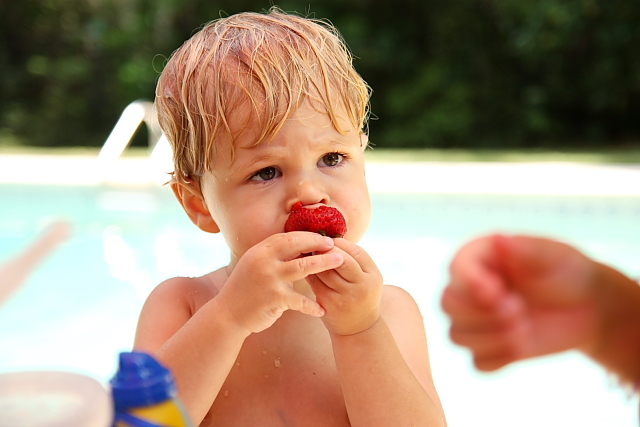 I also have been reminded of what swimming can do to a child’s appetite! We have nearly 4 meals between the time Justin leaves for work and the time he arrives home… but I’m thankful that when they’re hungry they are certainly less picky and will almost always eat what is put before them! 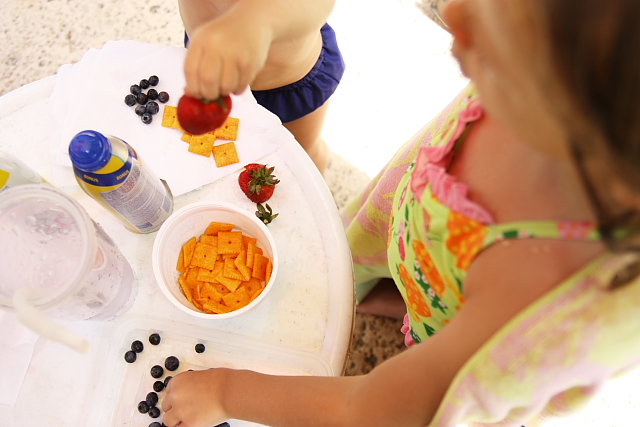 Before I move on to the recipes… another thing I love about summer is zinnias. I know I’ve mentioned them many times but  the seeds are so cheap and they are so easy to grow I really can’t think of any reason not to try them. These are my “GIANT zinnias” and I never knew zinnias could be so giant. It’s probably hard to tell from the picture but they really are enormous {about 5-6″ in diameter}. 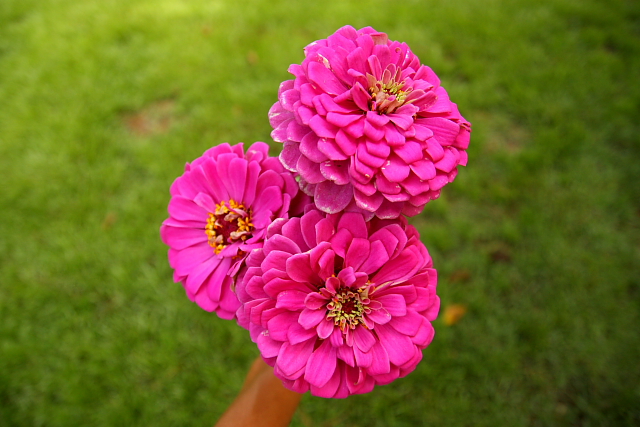 Now for the recipes… 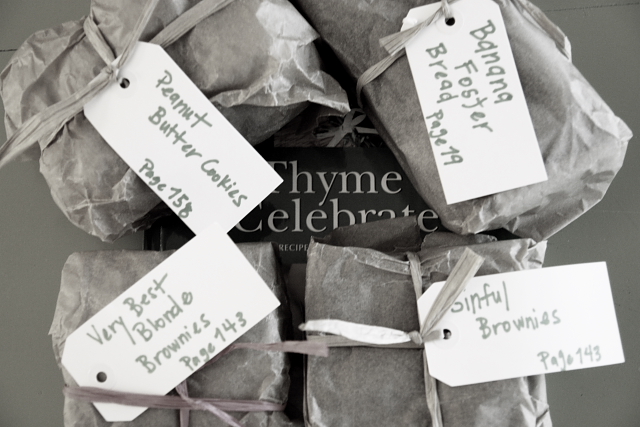 I’ve never met a Junior League Cookbook that I didn’t like {and I’ve met several of them} and A Thyme to Celebrate from the Tallahassee Junior League is certainly no exception… especially since I arrived at my doorstep with several of the recipes already completed and wrapped in brown paper packages tied up with bows!

Nancy {a Tallahassee Junior Leaguer and cookbook co-chair} thought I might enjoy the cookbook… and my goodness was she right! She also gave me permission to share a few of my favorites. 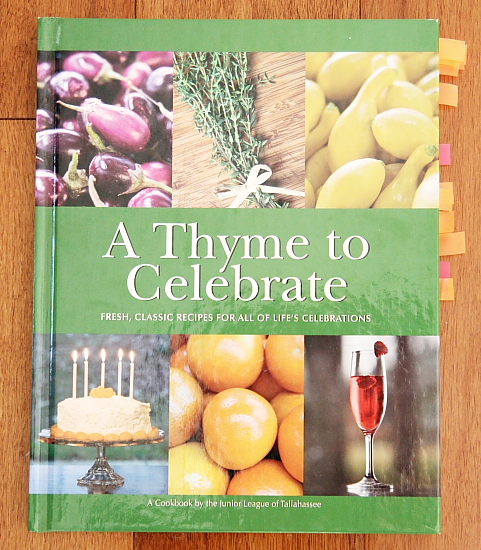 I’ve been through the book several times “flagging” what I couldn’t wait to try and so far I’ve not been disappointed! Last weekend we hosted our families here for Paige’s birthday so I chose 2 appetizers from the book and both were a big hit. 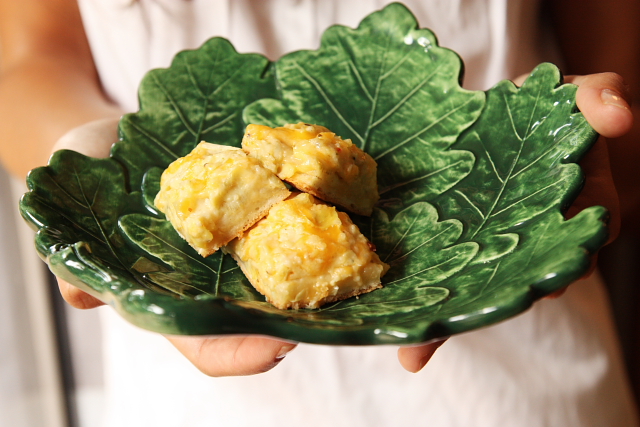 Thank you to my sister for helping hold them and for refraining from eating them while I photographed them and thanks to my sister-in-law for placing them ever-so-carefully on the plate. We had fun pretending like we were “foodies”. Now, I wish I could have had my act together enough to take pictures of the whole process but I was hosting our families and well, I didn’t have presence of mind, nor the time to mess with my camera during the process… but trust me, this one is so easy and SO good.

Preheat oven to 400°. Place artichokes, shredded Cheddar, mayonnaise, salad dressing, and Parmesan together in large bowl and mix well. Spread evenly over the pizza crust. Bake for 15-20 minutes until hot and bubbly. Let cool and cut into bite-size pieces.

It’s so good and I love that your guests can just pick up the little bites! 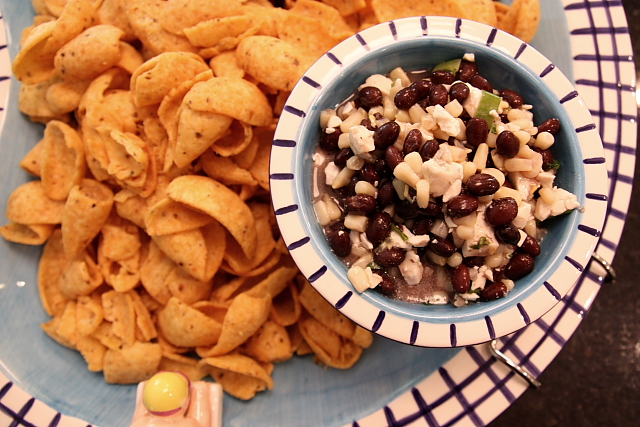 Now, this may not be new to you… but somehow it was kept secret from me until a few years ago when I had it at an Auburn football tailgate and it was brought by none other than a Tallahassee Junior Leaguer. It was definitely the first thing I marked in the cookbook. I’ve been thinking about it for a couple years now and am glad to have my hands on the real deal recipe and I’m delighted to be able share it in case you don’t know about it!

They were BOTH so good. I look forward to sharing a couple more recipes! The Tallahassee Junior League sells their cookbook on their WEBSITE if you are interested! Like all Junior League chapters these women are working hard to improve the lives of women and families in Tallahassee!

Ok, now it’s 11:10 pm and I want Feta Black Bean Dip and Artichoke Bites but I don’t think I could keep my eyes opened long enough to eat them…. good night!!