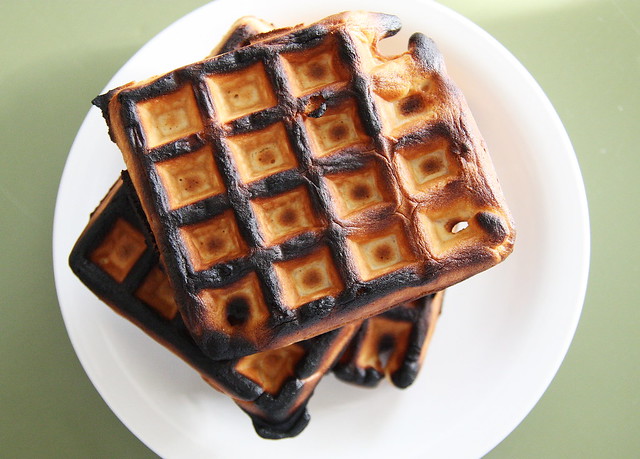 … so bad that the dog wouldn’t even touch it. 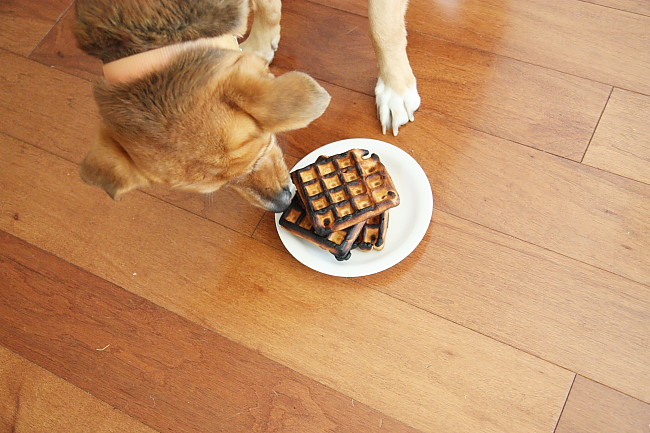 Video chatting with Erika and Sloane… I told Morgan earlier this week to point the remote towards the VCR. I said it about 5 times and finally Justin reminded me that it was a DVD player not a VCR and  that Morgan  likely had NO IDEA what a VCR was. The whole time I thought she was ignoring me. Welcome to 2011! Rover comes to the computer and asks, “See ‘doane?!” I think we scare her to death. She always just looks at us like,  “are these people serious?” 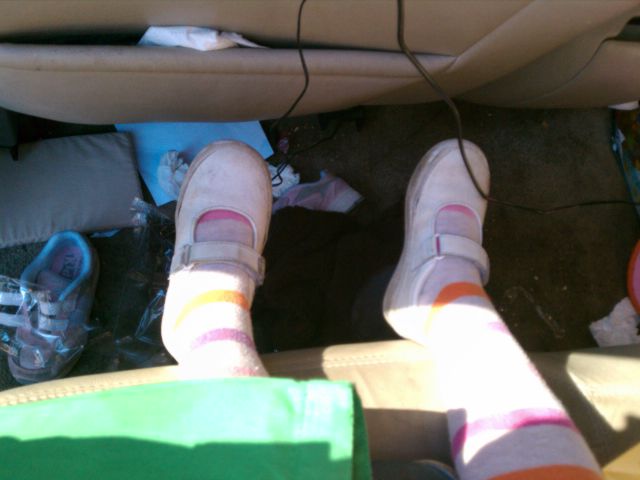 … not noticing she wore 2 right shoes until I was informed by preschool staff after she was in the car at pick up. And I see she had a pair right below her on the floorboard with 1 right and 1 left, but thankfully she can totally rock two right feet! 🙂

This morning we were rushing out the door when I remembered today was not normal, today was Paige’s bear hunt… we rushed back in and changed into our camo and grabbed our bear! Whew! 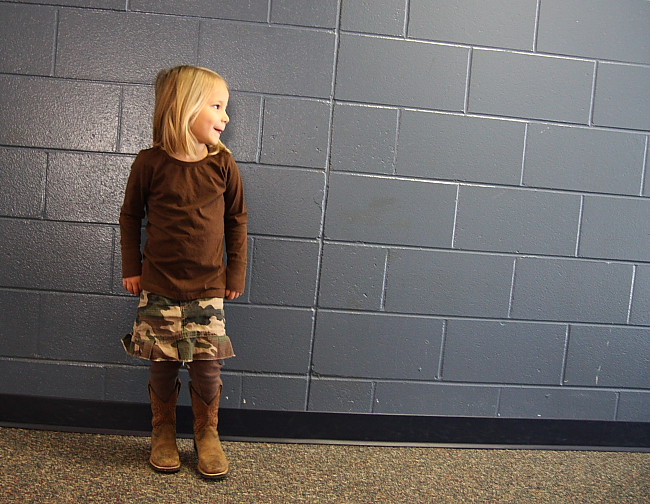 I also got a call today from Rover’s Mother’s Morning Out teacher.  She called and then texted to inform me that he stuck {tire} mulch up both nostrils and she thought I might want to come get him and take him to a physician. Dr. Darby to the rescue with a Maglite… clean as a whistle up his nostrils. One time when Morgan was a baby she had a stuffy nose {being a first time mom} I called the doctor to make sure it was ok if a baby had a stuffy nose and when explaining to the phone nurse her symptoms I forgot to use the word nostrils and told the nurse that my baby couldn’t breathe out of either one of her “nose holes“! 🙂

This picture below shows that I resorted to Eggo waffles after I burnt our others to a crisp and that we are still dining with equines. 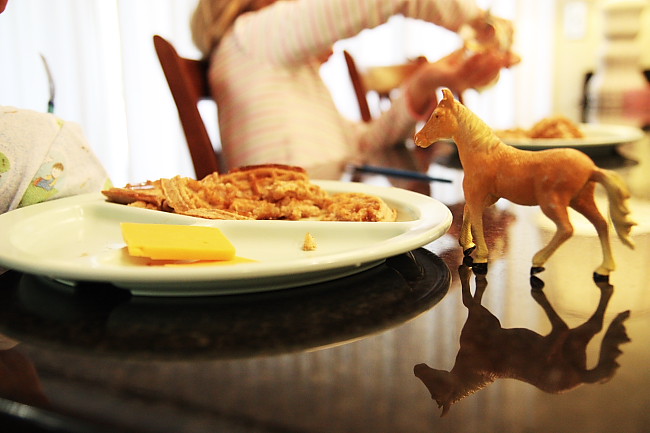 I took Rover to the tire store last week with me and while the nice guys patched 3 holes in my tire he cried for gumballs in his jammers and sister’s red boots. 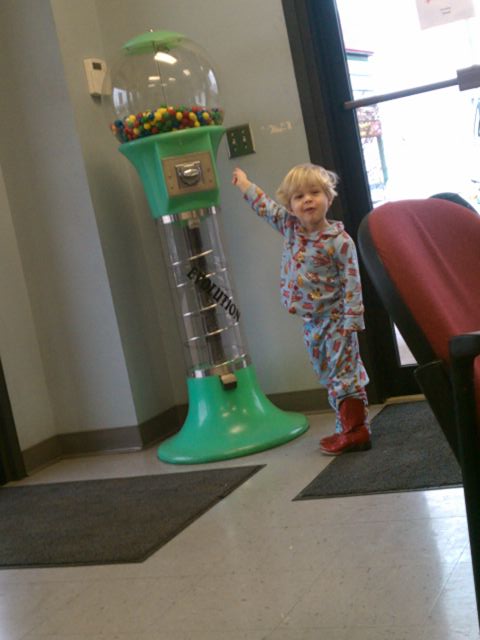 Today my sweet friend and employee of the month at HBTs, Christy, bravely watched the rovers, made them s’mores, and took pictures while I ran to the post office with all your Happy Camper thermals! By the way, Christy has been a complete God-send to me and she’s moving in March and I’ve already started mourning. She is the reason any of you have received t-shirts in the last couple months! 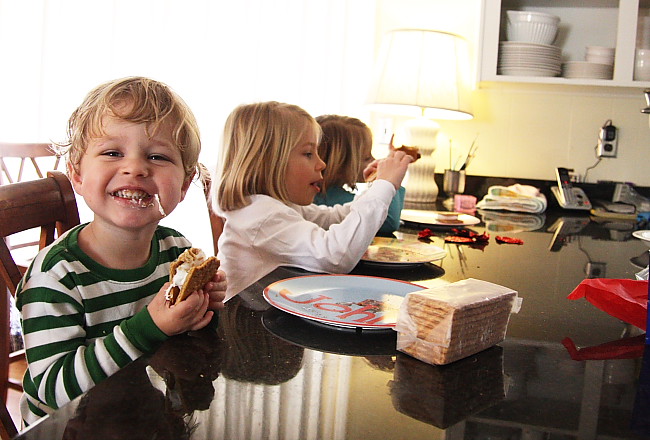 When LA was here we rode around in her sweet ride and I tried not to covet it. On one little excursion we had lots of bundled up babies in the back and LA was totally blaring Christian rap and I thought I was going to lose my mind.  It wasn’t Tupac or Snoop from the mid ’90s so I didn’t know the words and I just straight up told her I couldn’t handle it any longer and made her turn it off! She was cool with that. 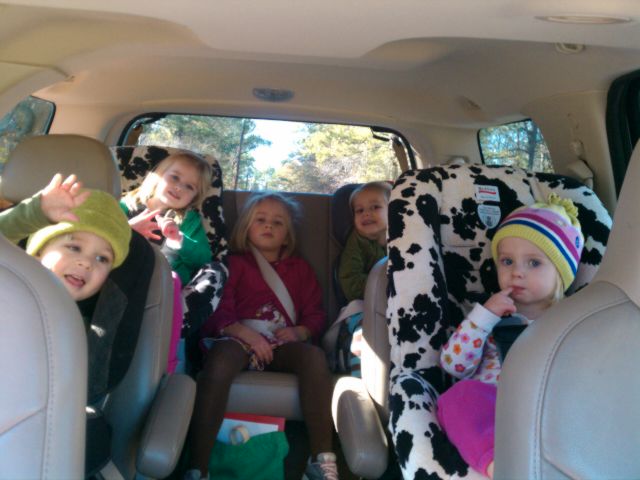 She is probably not cool with this but, I think she’s beautiful whether she’s eating or not and if she tells me to take it off, I will, just like she graciously turned off the awful music that she subjected me to… 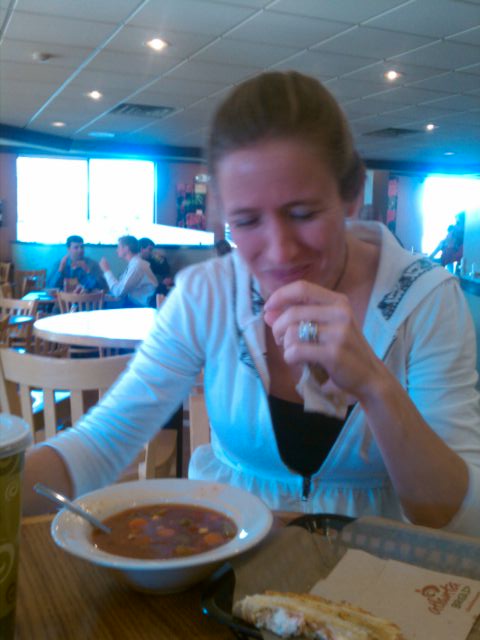 So we also managed to grab an hour and half away from the 5 precious, young and very needy children to grab lunch and hit 2 antique stores… this is what we saw. 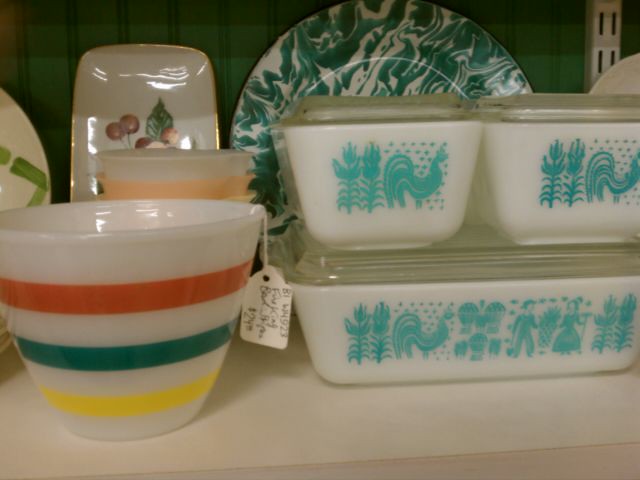 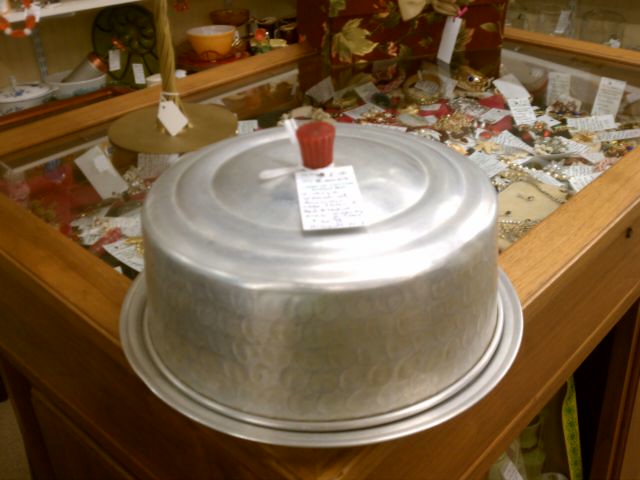 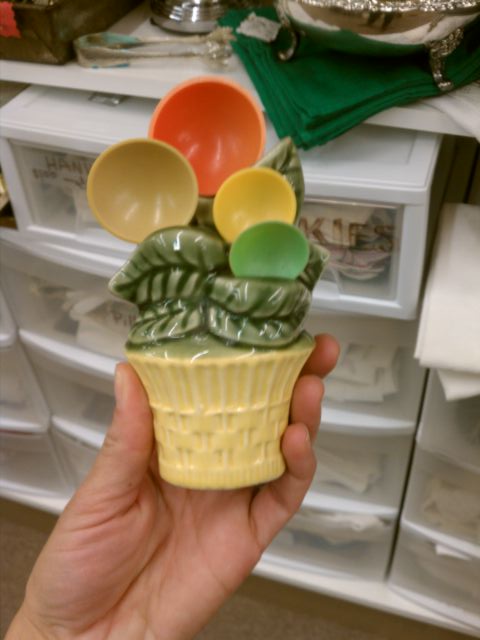 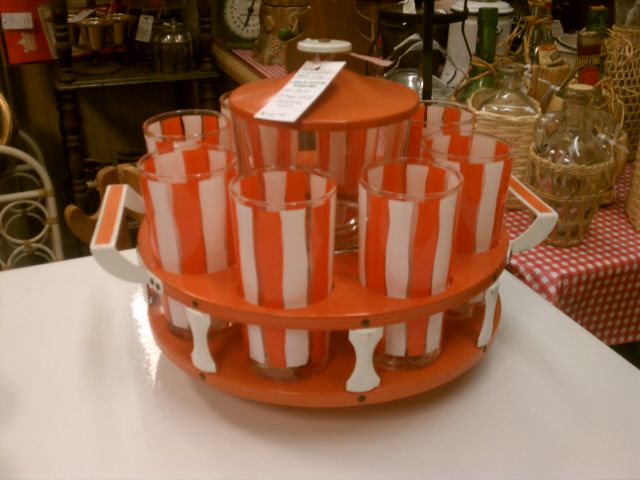 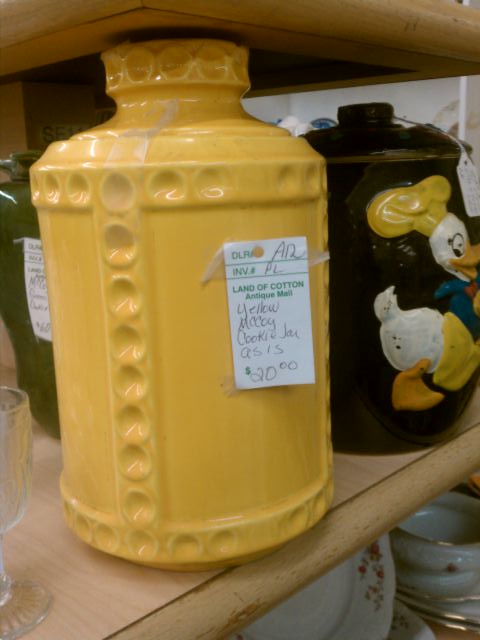 Loved and bought… {seats 8 for $25 … yes, $25}, I almost arm-wrestled LA for it but then I remembered she’d totally kick my tail and then she decided she needed chairs not a table… so no arm wrestling was necessary! 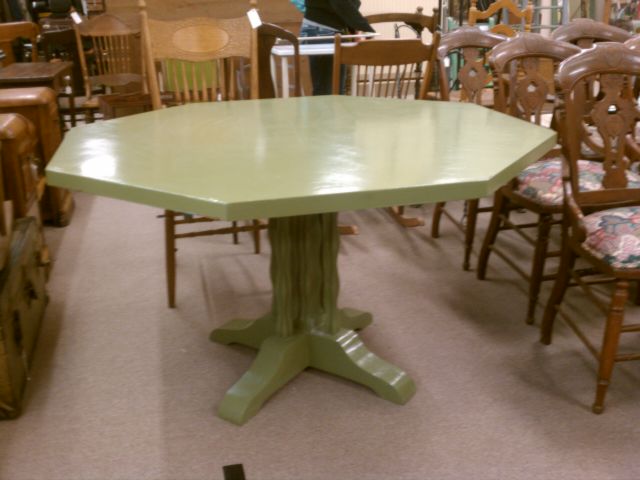 But just in case LA’s wondering, one day I will arm wrestle because I am hanging out with this girl some in the afternoon’s while Rover’s sleeping. She’s notorious for getting herself into this position… I cuss at her when she does it and try and try again , {usually laughing hysterically} but my body physically cannot do this position. She tells me it’s ok if I can’t do it and I think, damn straight it’s ok, this is not a  position for humans to be in. I know she’s only smiling so she won’t cry because it hurts so bad. She also has been known to let go of her legs and put her arms straight up in the air while her legs are still in the air… even more impossible. You should see if you can do it, if you can, please don’t tell me. 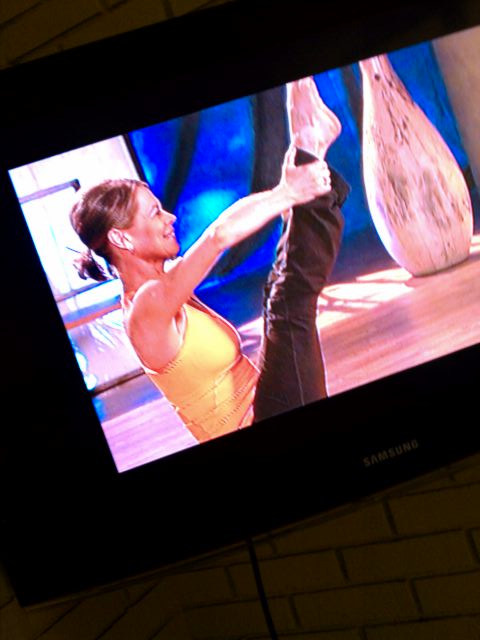 LA found and bought 3 glass canisters for her kitchen counter and I’m still waiting for the text to see what she mustered up to put in them. I took no photos of them.

And I loved and bought this little spoon rest that so perfectly goes with my spoon holder! It was a whopping $5 and I tried to get it for $3 but no dice! They have found their final resting spot in front of my coffee canister on the counter! 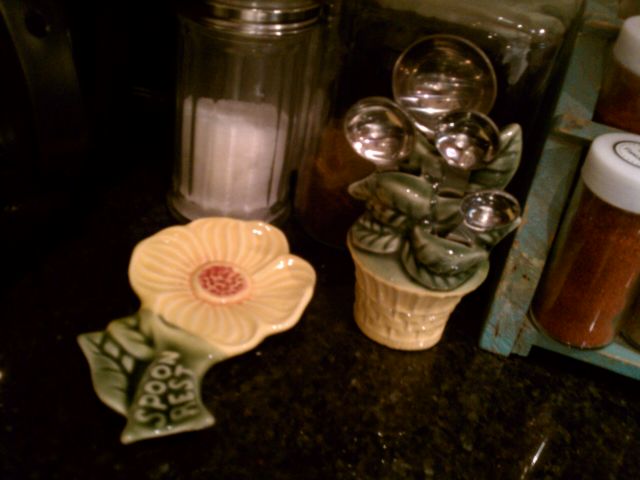 And the table has found it’s final resting place in front of our bay window… perfect for dinner, games, puzzles, or piles of mail or laundry! 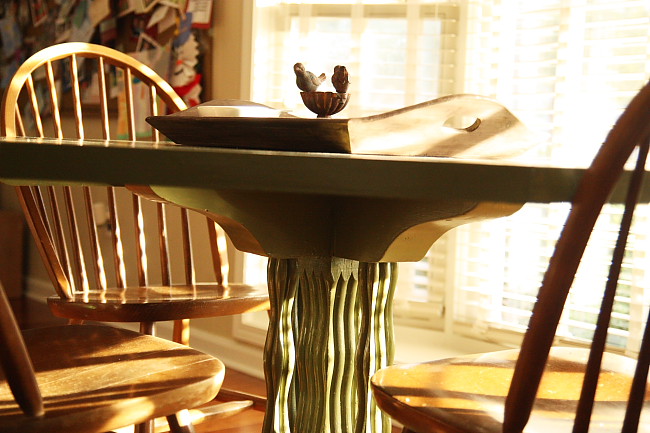 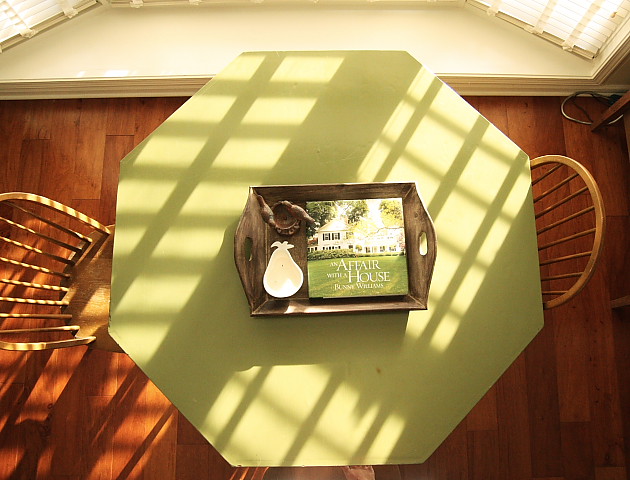 He Is the Reason That We Sing