I should be a journalist with a title like that! Faithful, patient & kind rovers, just when you think you’ve got things under control May will come in and keep you honest. 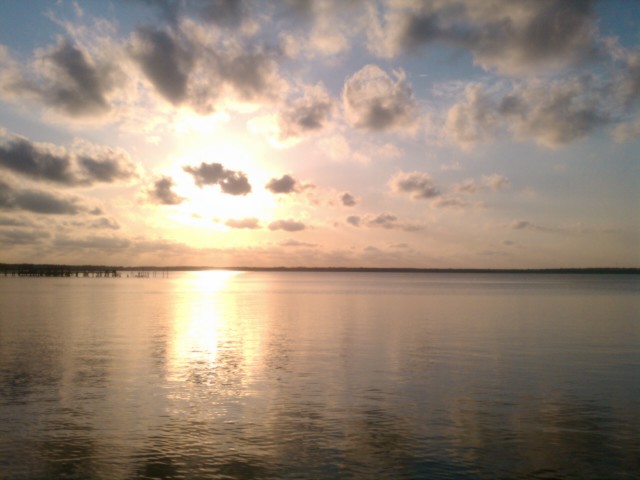 The week before I listed the last slew of HBTs my friend and only Honey Bee Tee’s employee, Christy, decided it would be ok to move to South Korea on me. Now, this was not a sudden thing, like I’ve made it sound. I’ve known for a long time that she was leaving, but I blocked it out in my mind, never wanting to come to grips with the fact that she was, in fact, not going to show up at my house and run Honey Bee Tees for me. But it happened. She left, y’all ordered, and I had about 3 days to pack and ship an insane number of orders… solo! I can now pack t-shirts with my eyes closed, while I’m texting and while I’m sleeping. A new friend has stepped up to the plate to help run the t-shirt shop, and now that she’s had a couple weeks under her belt I’m so thankful she hasn’t retired, yet! Speaking of tees… thank you all for being vultures, more tees are arriving daily.

That same week I had house guest for 6 days… but not at my house, at the beach. 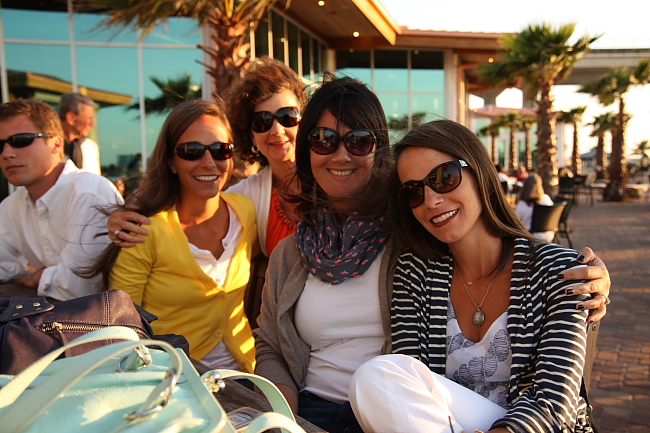 We had a wonderful and relaxing little vacation that involved sun, boats, sand, food, crazy wind storms, shopping, a haircut {unfortunately not me, but the rover}, coffee, birds, bird poop, and lots of laughs! Do you ever forget what you look like until you see a picture of your self and then you’re like, “There is no WAY on earth that my hair is that long in real life!?” I mean, I’ve got a mirror in my bathroom but apparently I don’t look in it, because y’all,  after seeing this picture I was thinking of changing my name to Crystal Gayle.  Cousin {pictured above} is the best stylist on the planet {Naperville/Chicago} if anyone needs one,  but she was on vacation and really, I honestly didn’t know I had hair that long until I got back and looked at my pictures. So this morning I called Ulta {despite FB friends trying to convince me otherwise} and asked if I could come in and get a trim.  Cousin told me what kind of terminology to use, like “long layers, face framing and thin it out”. All of the above, plus 4 to 5 inches off the bottom was all I needed and she did great… a very good hair cut by a very sweet lady named Melissa! I won’t lie, I was nervous. I apparently care more about my hair than I thought I did… while she’s cutting away I was afraid I’d leave looking like a lion. But I didn’t, and it was such a treat to have my hair washed, cut, and dried by someone, a really good reason alone to get regular haircuts! And my hair is still really long.

Now a matter of business…. Thank y’all for the overwhelming support of BIG HOUSE‘s swimsuit and towel drive for  Alabama’s foster children!! I decided that I’d actually give away two Kindles because the wonderful response, one for folks that made online donations and one for the folks that came into Bellamia. So, I cranked up the random.org number generator {because I wasn’t up for cutting up names and placing them in a hat} and it picked {21} Anna Hancy from the online donations list and {13} Tami Stanford from the Bellamia donations list! And the funny thing is… I am friends with both of these people, but you’re going to have to trust me that it wasn’t rigged. I’m just happy to know that my friends read my blog,  even if they don’t comment! 🙂 You girls will LOVE your Kindles! 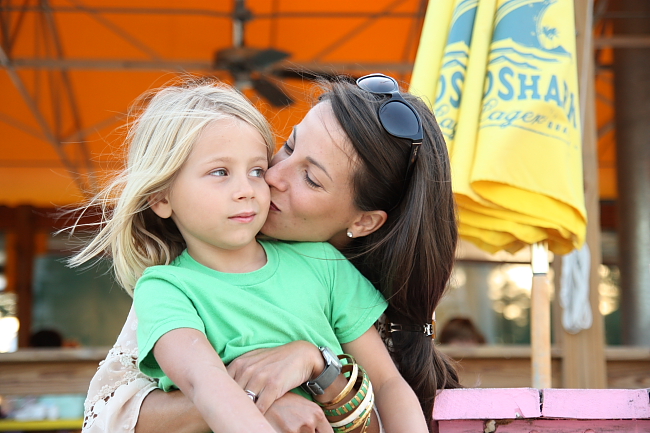 As I mentioned earlier, life has simply interrupted my blog. Our sweet six-year-old daughter, Morgan, graduated from kindergarten and will be in 1st grade in the fall, which means the Raiger will be in kindergarten. I simply cannot believe it. We got home from Morgan’s spring program/graduation, and she announced that she had her first loose tooth. Kindergarten graduation and a loose tooth shouldn’t happen at the same time! Life has also included trips back and forth to the gulf coast where we intend to spend the summer. On our most recent trip home, I had three children in my snack-mobile alone and at our 3rd stop at a McDonald’s I backed into a little, tiny, red sports car that was hiding  in a parking space behind me. Every employee at McDonald’s came over and put their head out the drive-thru window to see what happened, and I embarrassingly had to ask if it was one of their cars that I hit. Then a man walks out of McDonald’s with his bluetooth in his ear. I’m not sure what it is about those things, but I always assume people who wear them mean business. He said, “What’s the problem?” I asked, “Is this your car that I hit?!” He walked over closer to the bumper to take a look. I never knew if he was on a phone call or if he was just ready to answer a phone call. There was a little scratch on the bumper, but he very graciously  told me it was no big deal and might have used the word “baby”. I was so relieved but not enough to hug him… just enough to hop in my car and get the heck out of dodge before he changed his mind and called 911 on his bluetooth. 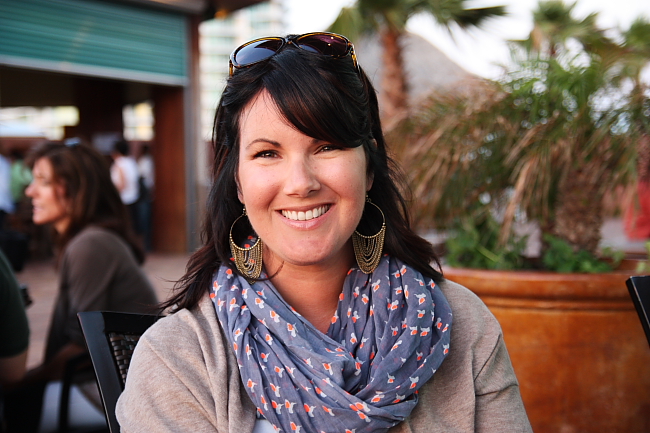 Back to the beach, my cousin whom I call Cousin and my aunt whom I call Diana came down from cold and rainy Illinois for a little fun in the sun. My cousin is like a sister to me and my aunt is like a second mom… and my aunt is hilarious! I won’t tell you how old she is because 1) you wouldn’t believe me and 2) because she’d strangle me.  She’s super fit and loves vitamins, always has, always will. Now I won’t tease her for that, because I love vitamins too… but I don’t love them to the degree that she loves them. These are just a few of her daily vitamins, in her pill case that is older than me… 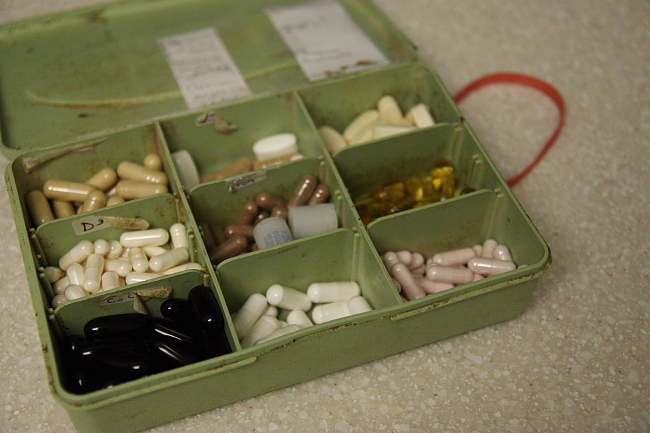 So, we’re talking and she’s telling me what each one is and what it’s for and then she grabs another couple bottles of vitamins and says, “I take this one because sometimes my stomach gets upset!” I told her, “I’m sure there’s no way your stomach could possibly be upset from ingesting insane amounts of vitamins!” She almost made me a believer, but for now, I’ve only made one online vitamin purchase since she left.

Erika, Chance and Sloane came too. We packed our rental house to the gills, ate out,  and rented a pontoon boat because we couldn’t all fit in the Starcraft. 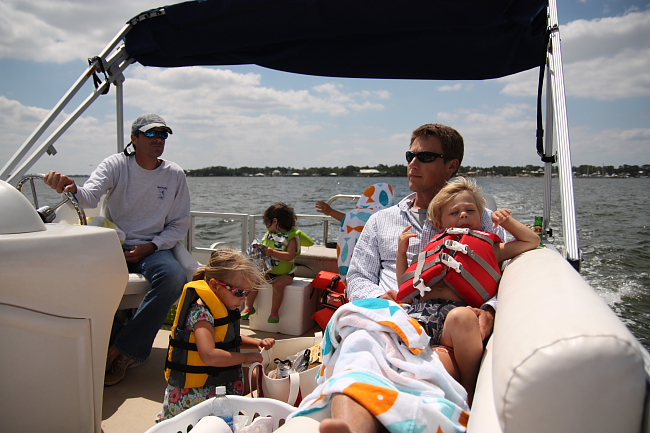 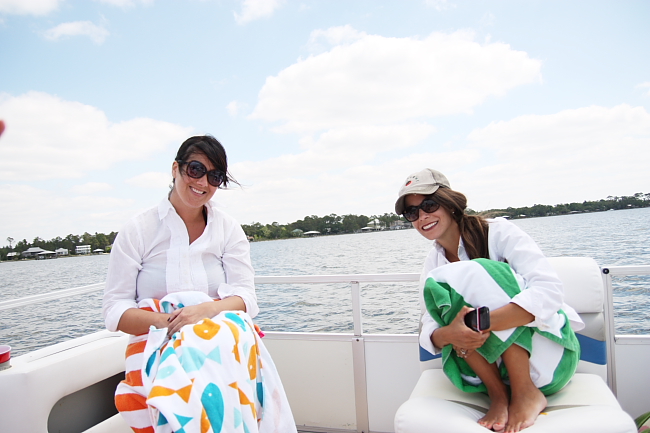 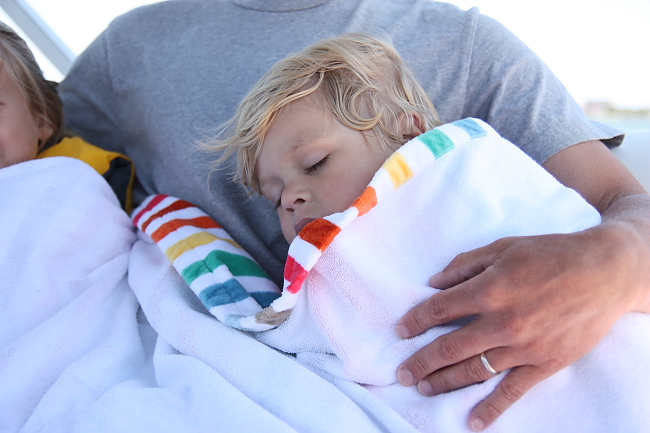 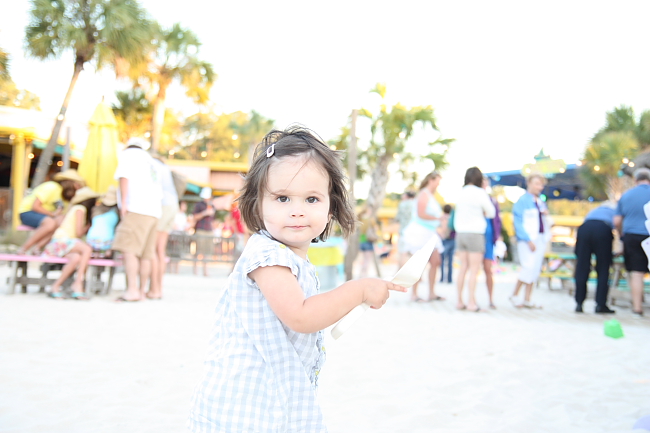 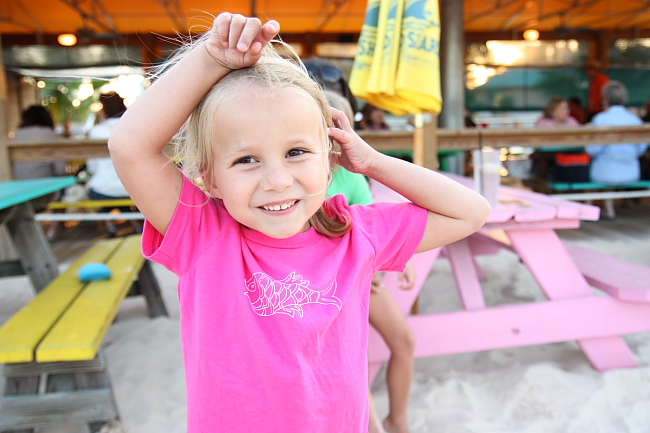 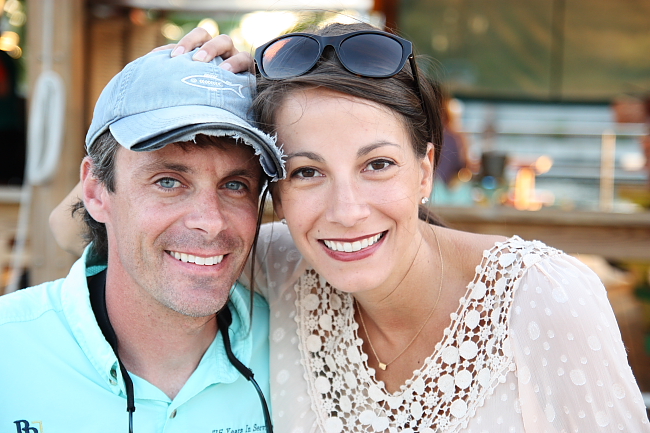 We thoroughly enjoyed morning views like this over coffee… 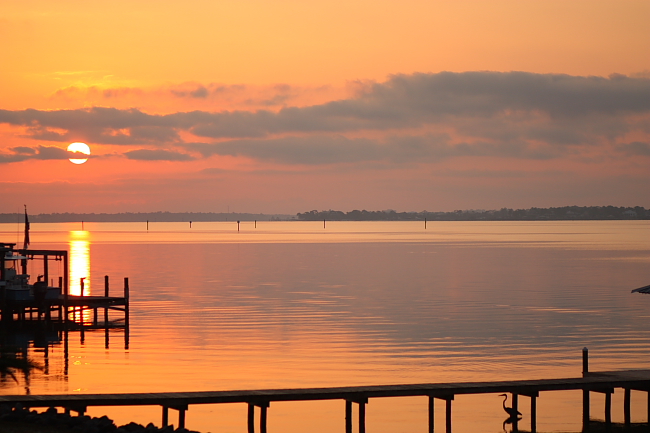 Rover absolutely loves Sloane. He asked when she’d be there about every 30 seconds… 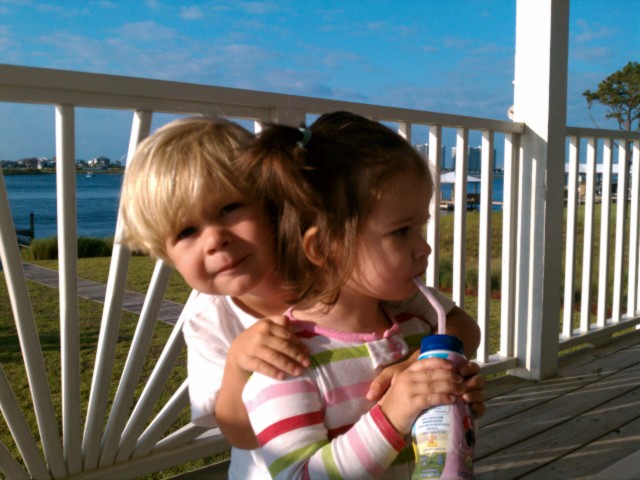 One afternoon we enjoyed a rainbow across the bay… 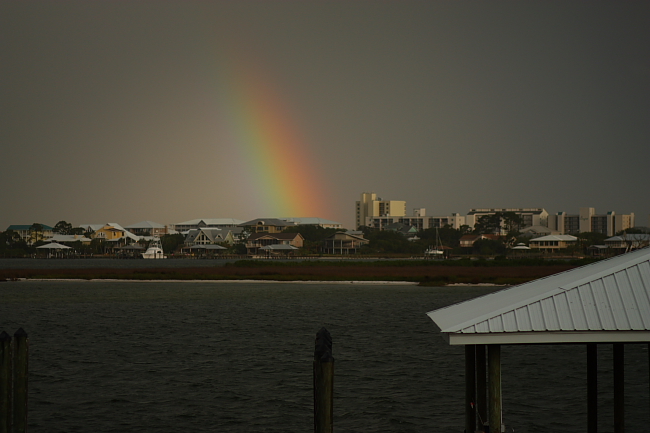 And in the evenings we’d watch the moonrise. 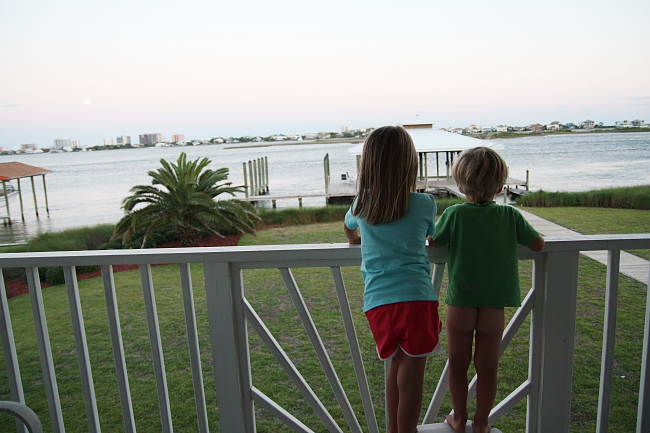 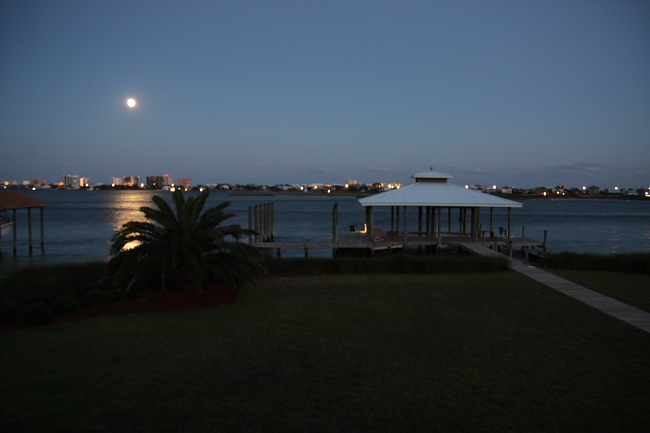 We returned home to a garden that was busting at the seams… can you tell I love yellow and green? And my lemon painting by Diane! 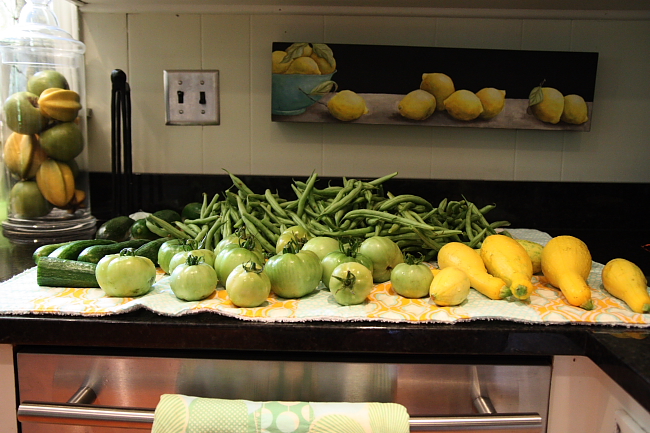 Justin brought the veggies pictured above home on a Friday afternoon, little did I know that was only about 1/20th of the green beans. So early Saturday morning we called in the troops {aka our friend’s the Salters} for a backup field hands. They came, they saw, they conquered. Six kids, four adults, and two hours yielded close to 30 pounds of green beans!

It looks like Steven and Justin are strategizing while the kids are just going for it. 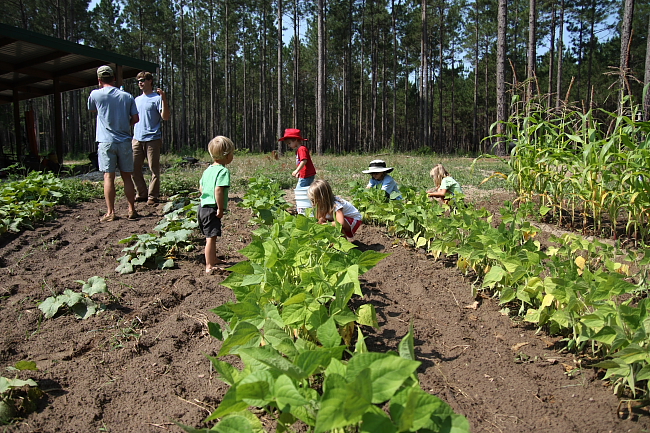 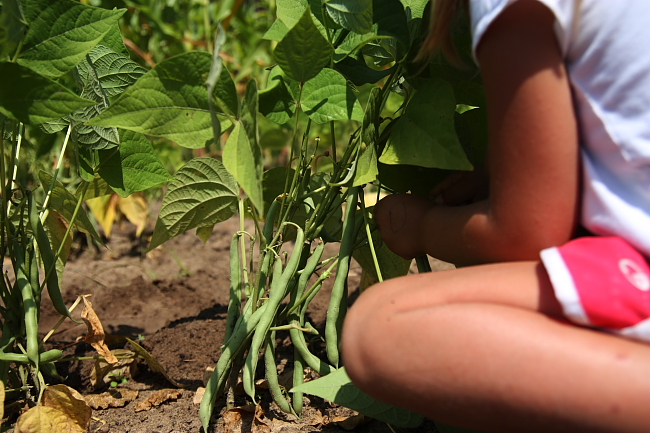 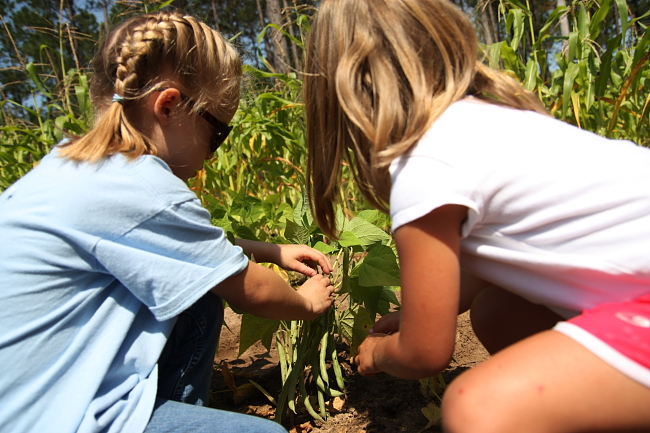 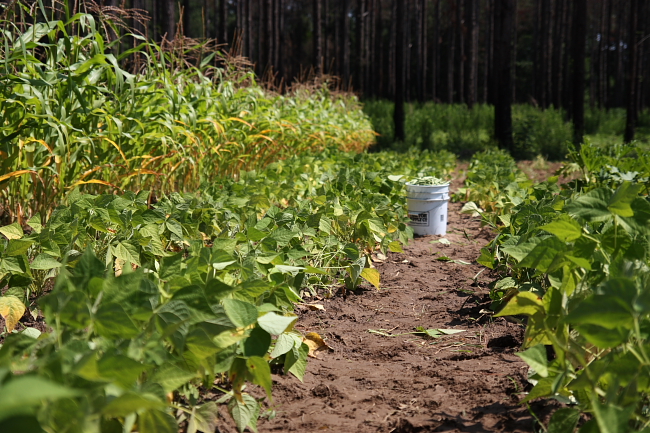 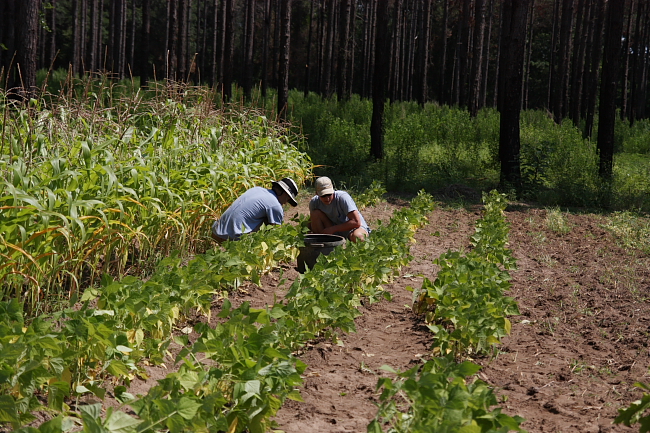 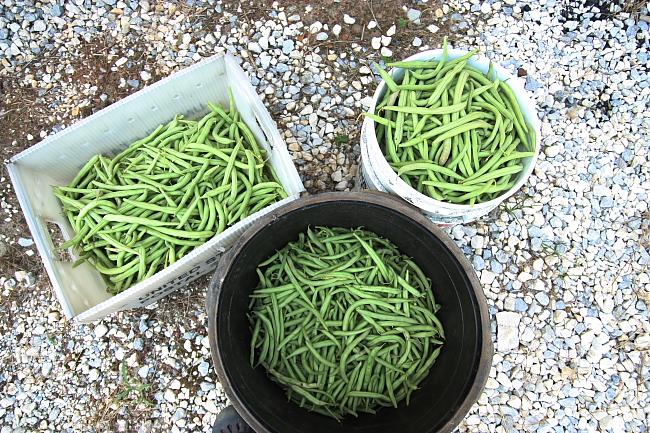 Our garden is on Justin’s family’s land about 20 miles south of our home. We’ve always had great gardens there but this year things are looking especially good because Justin had it irrigated, water is a good thing!

You may have seen on Erika’s blog that Apartment Therapy featured our kitchen renovation a couple weeks ago. It was such a pleasant surprise… I didn’t even know they were doing it! And I even look at the before pictures of our kitchen and can’t believe they’re the same cabinets… paint works wonders!

I think that brings us up to speed… thanks for your patience and thanks for checking on me!