Ahhhh summer is officially in full swing, and I’ve been waiting for it for a LONG time! 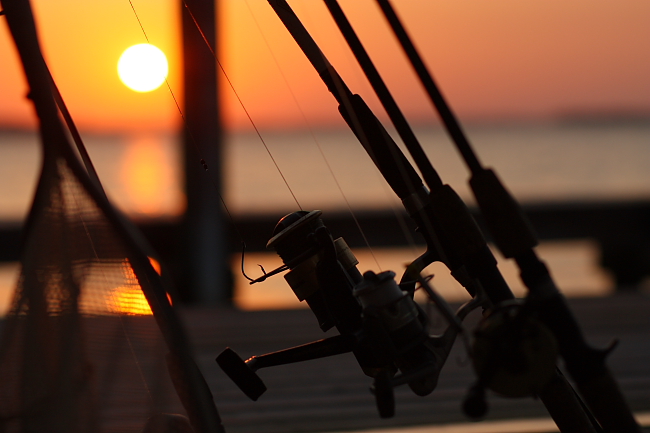 First, you folks had a lot of questions in the last post… most were about Erika and her accessories, make up, hair, shirt, etc. I think her bright colored bracelets were from World Market, but the rest she talks about in this post on her blog. The little gold necklace, she doesn’t talk about it in that post but she has talked about it before and maybe she can provide details in the comment section. You also asked about my lemon painting by Dianne, she’s a blog reader turned friend and painted it for me a couple years ago. She can be emailed at diannedballard{at}gmail.com. And last but certainly not least, Cousin, who’s name is Erin, works at Amber Waves Salon in downtown Naperville, and she would be happy to assist  any of you in the area looking for a new stylist and she’s really GOOD!

And speaking of hair… this is all I’ve got  for you of my recent cut because it’s been in a pony pretty much since I got it cut. I don’t have ‘befores’, just think of Crystal Gayle. After it was cut, doused with elixirs and serums, dried and “fixed” with a hair dryer, paddle brush and round brush… 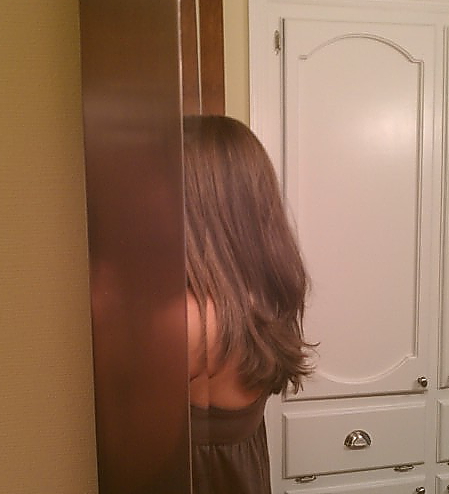 I fear it will never look the same. The next morning, after going to bed with it wet because hair dryer was left at the rental house weeks before… 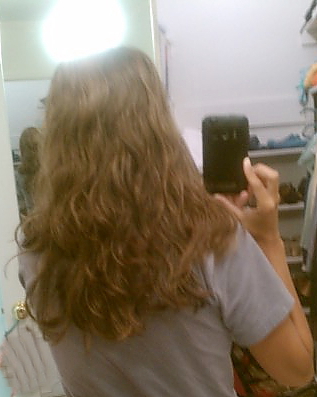 So, I really don’t know what to think about this craziness, with each little blond-headed child I birth my hair gets wavier. Then I took a lot of length off and it’s even more so. I have days of embracing it and days of cursing it. This summer it will be pulled back and my head will likely be covered with a hat so I have a few months to figure out what to do with it and how to manage it.

The children are going nuts right now… running, screaming, playing, laughing, and maybe trying to kill each other, it’s hard to say. Undoubtedly someone will wind up hurt with tears, mark my words. I may have to pull out my “mean mommy” voice. When I have to get serious with Rover he looks at me and asks, “Why you be mean to me, Mommy?” Our rental house is fully furnished, which is a huge blessing but it’s also full of breakable treasures, most I’ve boxed up but it seems each day more appear. The girls are wrestling on our bed right now and Rover is running around with a lighthouse in his hands. If we don’t get our deposit back, I’m taking it out of their savings! So, in addition to lots of breakables we have approximately 128 faux tropical plants, I’ve designated a graveyard for them in the family room next to the tv console, but like the breakables, they keep surfacing or maybe they’re reproducing, it’s hard to be for sure. Ok, Paige and Rover are both crying… I knew this is how it would end. My children are wild. 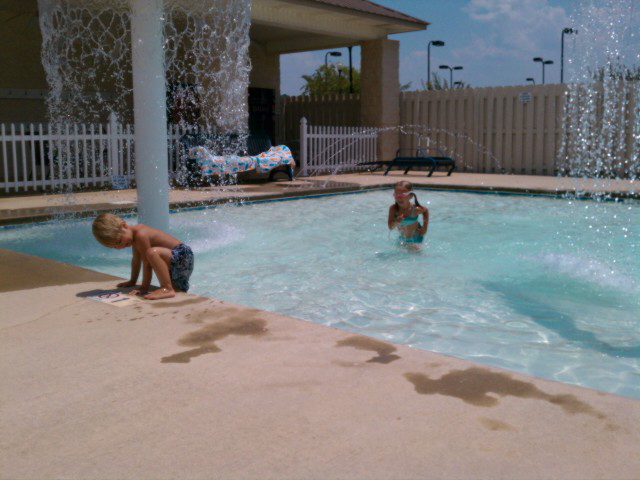 Today we ventured out to the city “Community Center” and pool. The pool itself is great and so far no one really goes there but us, it’s kinda nice that way. Thankfully it’s not at all crowded but I still feel like I need man on man defense. Morgan likes the deep end with slide and diving board, Paige likes the shallow end and Rover likes the kiddie pool. Rover is a complete maniac. He likes to jump into the baby pool. It’s only 1 foot deep and he screams “blast off” from the side as he jumps in. I told him half a million times to step in, and then it happened, he did a “blast off” and fell backwards, scratching his back on the rough concrete side. This occurred only minutes after he was walking towards the big pool, with me following behind, when he was about 3 steps from the pool when he decided to look back at his wet footprints on the ground behind him and the rover walked {while looking backwards over his shoulder} straight into the pool, tumbled down the steps and received a big goose egg on his noggin. I went over general pool rules with the kids about eating, running, screaming, etc. but I forgot to say, “If you’re walking towards the pool don’t look backwards over your shoulder to see your tracks!” Post-swim we decided to become members, hopefully we won’t come home with injuries after each visit. Have I mentioned there will be no “mother’s morning out” or television this summer?  The girls at the community center desk were so very nice and decided that the kids could each have their own membership card. You would have thought Rover was getting his driver’s license, shirtless, nonetheless. I don’t know how well you can see but he is cheesing it up big time! 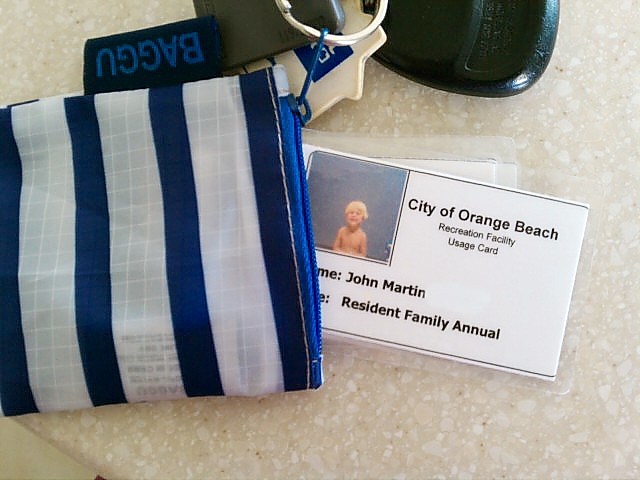 So, as you can see we have safely arrived in Orange Beach for the summer. If you read this blog and can actually follow me through an entire post, you may receive a prize, or you may not. The kids and I got here last Friday, and it took me all of 5 days to pack and load the car, and I made what I hope was my last trip alone with three kids.  There was also a fair share of delegating to do before I rolled out of town. I probably haven’t been very clear but the kids and I have made several trips back and forth with lots of stops in between. Anyway…. moving to the beach for the summer sounds kind of posh, and while we are fully aware that it’s a really awesome place to live, this summer will be more precious than anything. You see Justin has been away from our family for nine months working for the National Park Service in relation to the Gulf Coast oil spill. I have been alone, holding down the fort solo. God has been so gracious to me and provided me enough strength to make it through each day alone. I have missed my husband fiercely and the kids have missed their daddy. Remember way back when we went to McBeach early last fall, that week was one of his first weeks to be away from us. He was in Mobile for the first four months and then for the last five months he has been working in Gulf Shores.  He has been able to be home on Saturday & Sunday and for that I am so very grateful. Right around the same time he left, I started Honey Bee Tees which has been such a blessing to keep my mind busy and my wheels constantly turning and I am so thankful it is run from our dining room and living room! My mom was able to come down twice during his absence and I’m pretty sure both times I was wishing she’d move in with me.  There isn’t a regular babysitter in our home {but thankfully for my sanity an occasional one!} , there were no early morning walks or after dinner runs to Target, no tag teaming, pretty much if I went somewhere the kids were with me or if it had to be done, I did it, including mowing the grass with a self-propelled lawn mower that I didn’t know how to engage the self-propelled mechanism {I was sore for days}. I remember  realizing one night I forgot to pick up cough medicine at the pharmacy, I had just finished the whole bedtime routine when I had to load them into the car in their pajamas to go pick up cough syrup. I’m sure some of you have a 2, 4, & 6-year-old and know the energy that these little people have, not to mention, they have a fair share of bickering and whining too. I have tried my best to be the best mom I can be and enjoy all the time we’ve had together, and while I’m thankful for the time, I would be amiss to not admit that it has also been completely exhausting, revealing my selfishness, pointing me always to the cross and my deep need of a Savior, which is thankfully what I can look back on and attest to the faithfulness and sovereignty of God, the author and orchestrator of all things… some things we prefer, others we don’t, but all are worked together for good. And as for the blog, it has certainly taken the back burner.Thanks for hanging in there with me these last 9 months without even knowing that you were hanging in there with me. It was without a doubt the hardest nine months of my life. I have a new appreciation for military families, single mothers, and widows. Distance does not make the heart grow fond… distance is hard. There are so many complexities and challenges that surround living in a different city, heck, almost a completely different life than your husband that I wish it on no one. Had we known in the beginning that his work would have taken him away this long, without a doubt we would have joined him from the beginning. So, this summer is precious because our family is together again and we are not taking one second of our time together for granted. 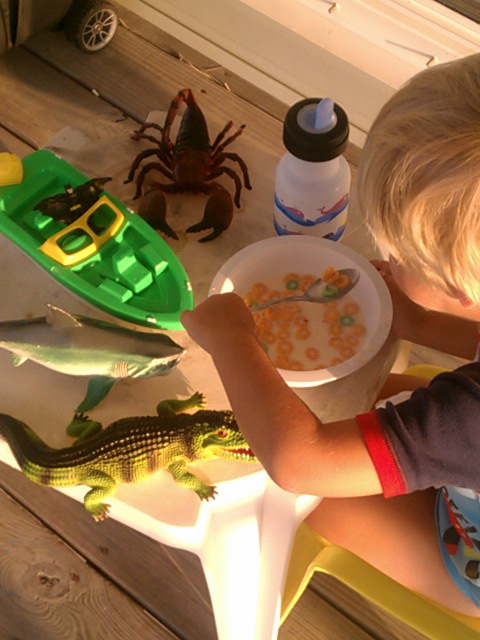 Justin has actually been in New Orleans this week so this coming week will kick off our official summer reunited… lots of celebrating is going on here and the views make it even more exciting. 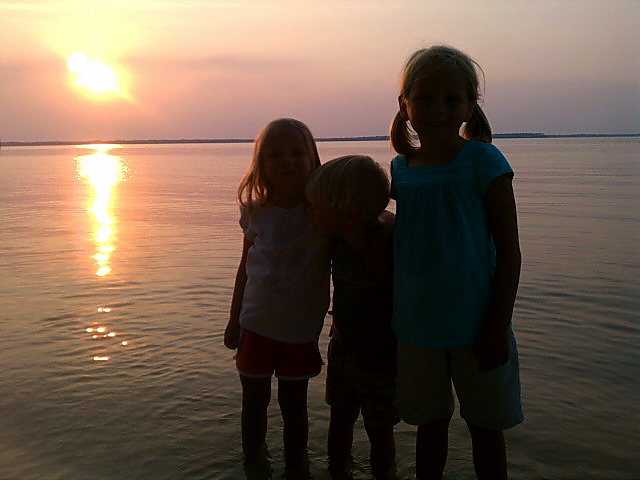 I’ve greatly missed preparing meals for my family, two of the three tend towards pickiness so I’ve been preparing the same meals over and over again and I look so forward to getting back in the kitchen and whipping up dinner. I brought about 25 issues of Cook’s Illustrated and Cook’s Country and I can’t wait to get back into the kitchen again and to hopefully share more recipes with y’all.

As for this weekend, we plan to park ourselves on Robinson Island and chill Raiger style. 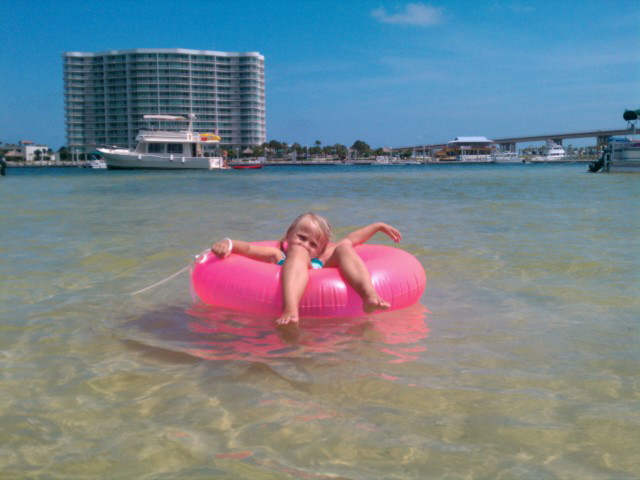 The Starcraft has been getting us from A to B {with minimal stares}. This is our friend Brannon, he assured me he had a decent life insurance policy before he got in… 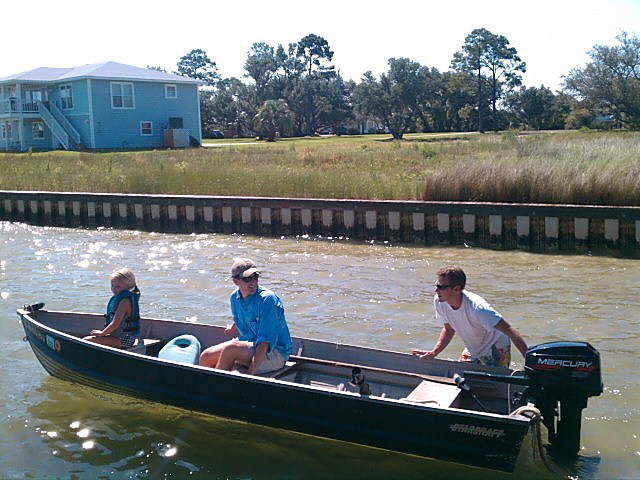 … but … she has been upgraded! Boys and their toys… but this girl is not complaining! We are welcoming a Boston Whaler to our family today, she’s about 20 years old but “like new” to us with room for more than 2 adults. Boston Whalers are reportedly unsinkable which we can’t say the same for the Starcraft, although when the Starcraft spent some time under water, she was baled out and still purrs like a kitty. Justin tells me the best thing about the new boat is that we still get to keep the Starcraft. She may even become mine. I drove her home last weekend and forgot to ask Justin for proper instructions on how to stop… there may or may not have been a crash landing! 🙂

Happy weekend and here’s to getting back into the swing of things!

Back In Order & the Lake