I took about 500 pictures this weekend, I think that’s more than I’ve taken in the last nine months! Thank y’all for your kind comments and words of encouragement from the last post. I’m working my way through my pictures and as to not include 100 in this post, I’m just going to touch on a few fun things we’ve experienced so far. We are thankfully not having to work too hard for entertainment, that’s what the library, the pool and Rover are for…. oh, and the local wildlife too! 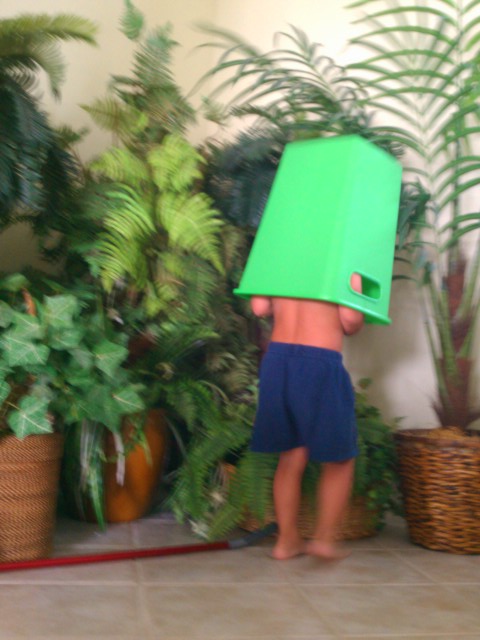 This is Rover in our faux plant graveyard with one of our recycling trash cans on his head.

I’ve been occasionally waking up early to go walk… this is usually my view when heading east. 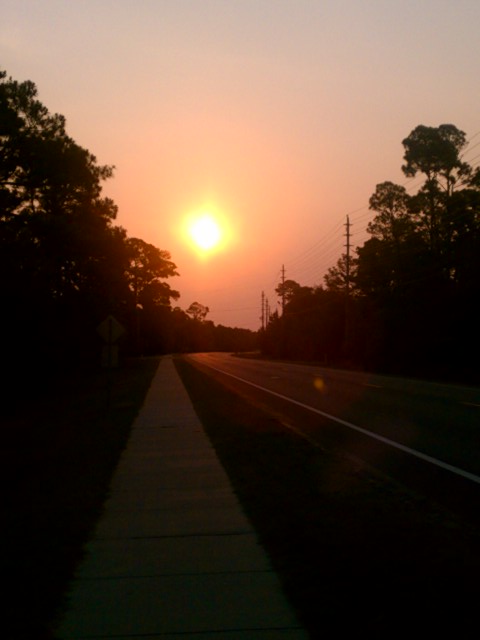 This is also along my route… 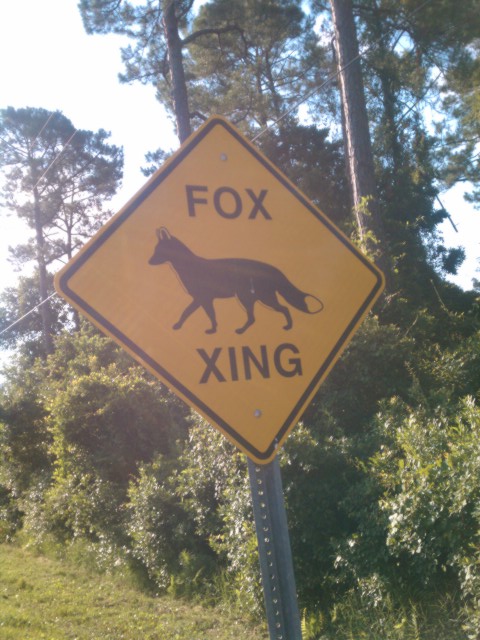 And guess what, they’re not kidding! Saturday I saw two foxes on my walk. I even snapped a few pictures of this sly little guy. 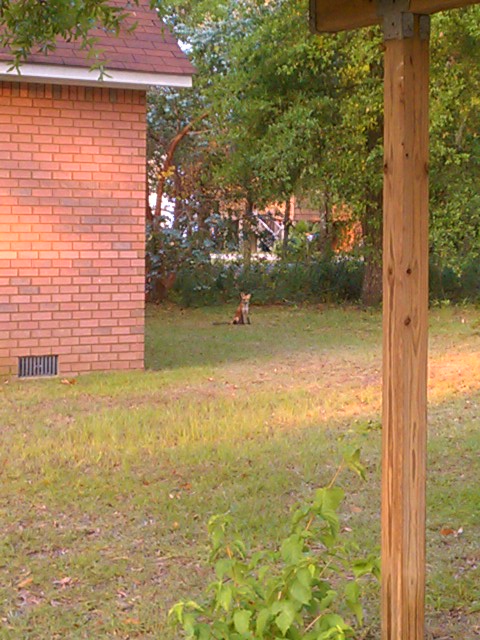 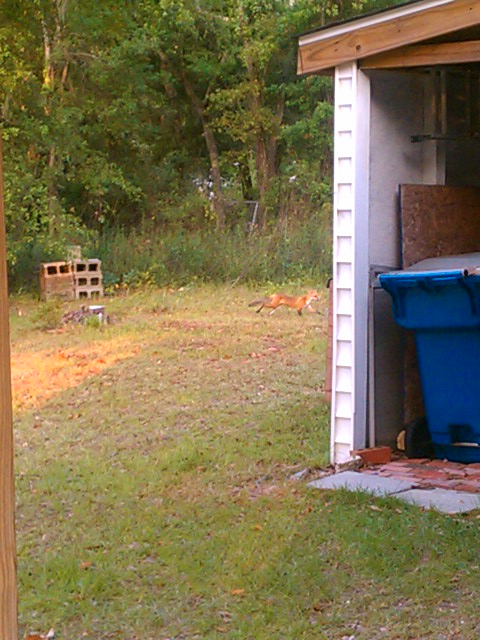 Speaking of sly, on Sunday afternoon Justin and the kids were on the dock and Morgan and Paige were catching minnows in nets for Justin to use as bait. They were busy filling up the white bowl {pictured below} with little minnows when our new friend Herry the Great Blue Heron walked on to the dock to have a snack. I was watching from the house and cracking up at him, he knew exactly what he was after. 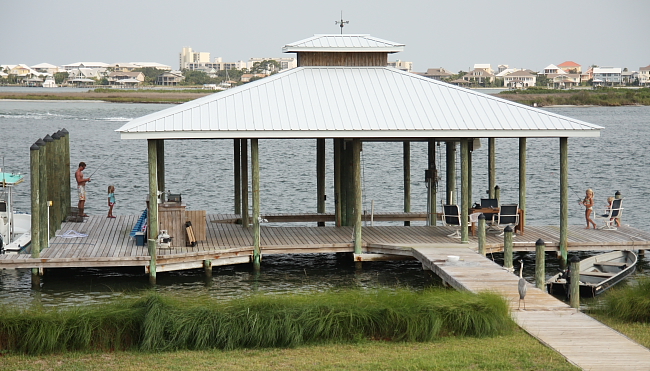 I yelled down to the dock to inform them that the heron was about to have  a snack so they moved the bowl a little closer and waited. 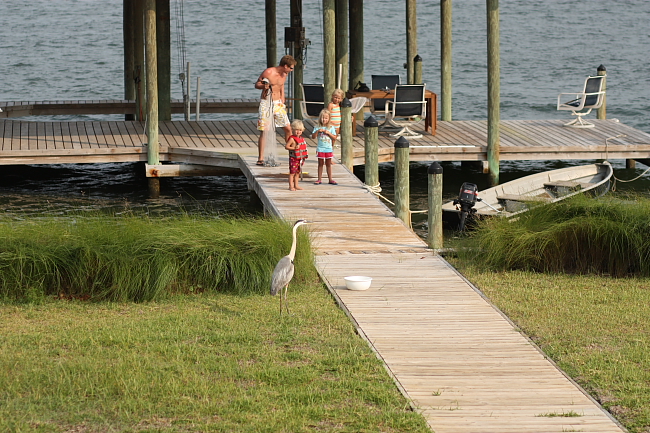 Then a few minutes later, I was in the house and peeked out the window and saw this and laughed hysterically because it looks like Justin is in the grass about to ambush the bird and the bird was having none of it. 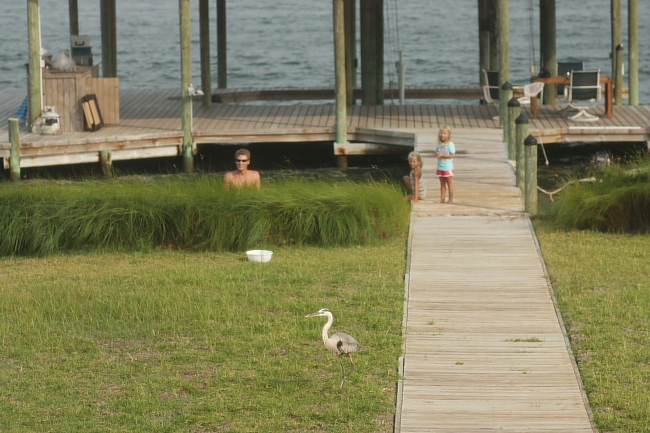 So we fished for some more minnows and gave Herry a little space and sure enough, that smart bird was all about us catching some dinner for him. 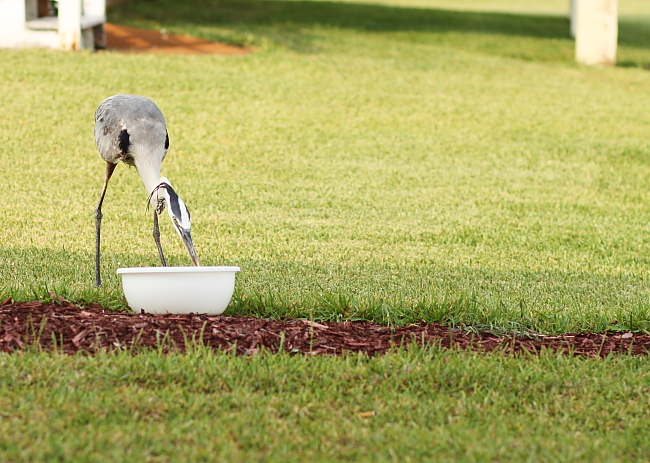 John Martin only walked in front of my camera a few times. 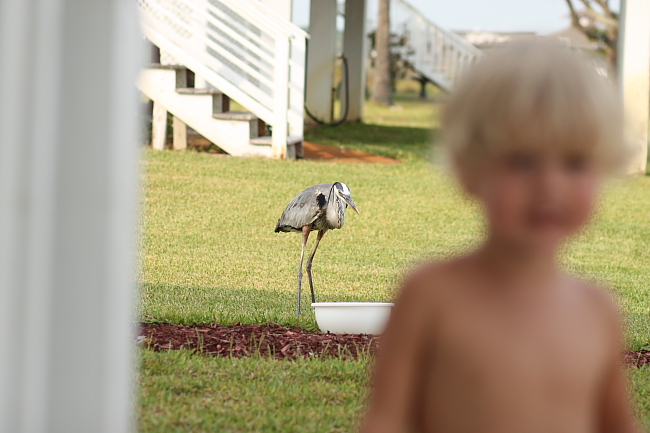 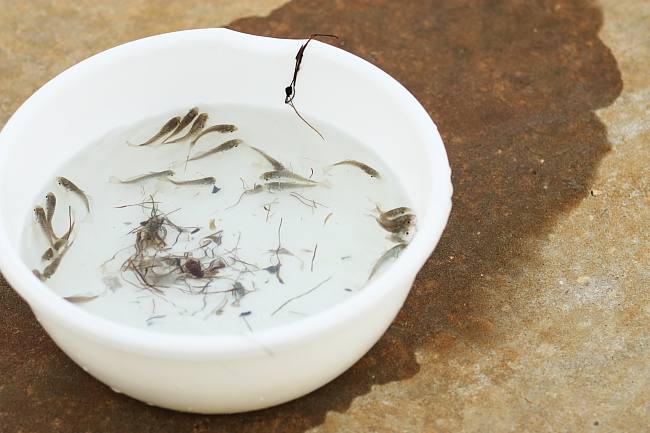 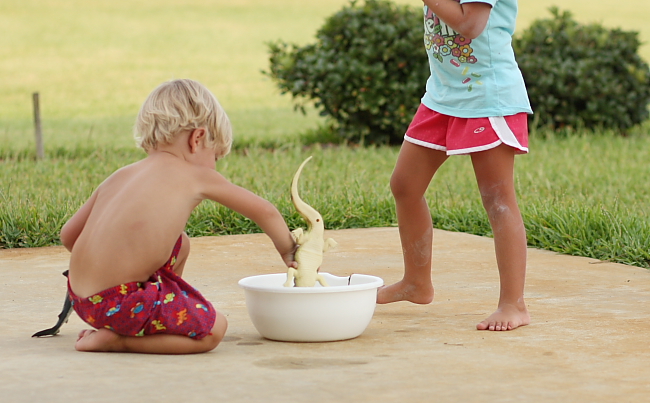 The kids added to the minnows and JM brought out his alligator. 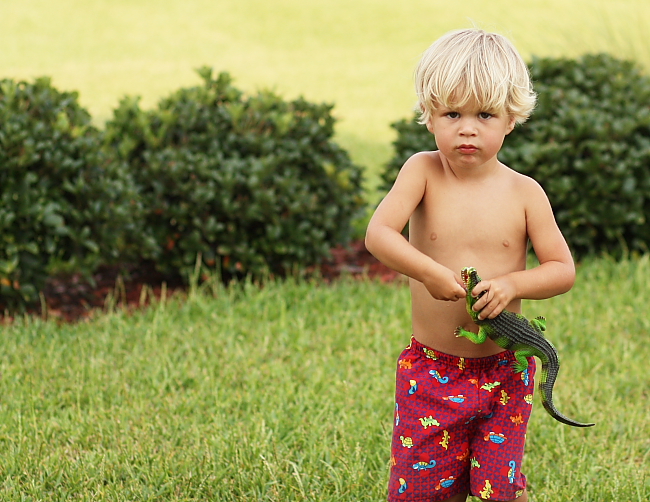 And the picture above should have led me on to believe that the Rover was up to no good, little did I know what he was doing. We have tried really hard to instill respect for life and nature in our kids but apparently Rover got a wild hair and decided that his alligator was hungry for a minnow and by the time I realized it, it was too late. {It’s not blood on his teeth, it’s just where the white paint has scratched off… but it undoubtedly adds to the drama of it all.} 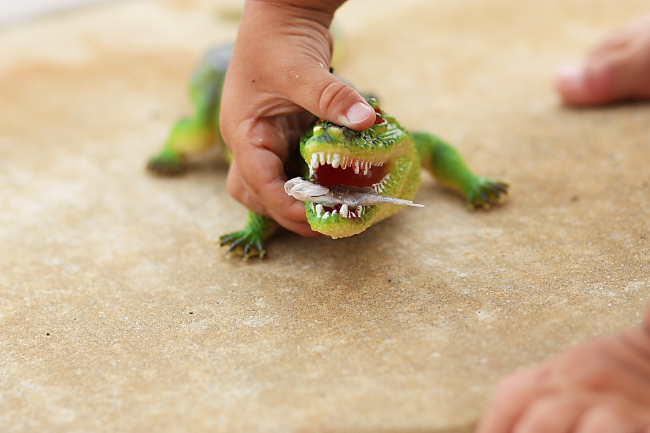 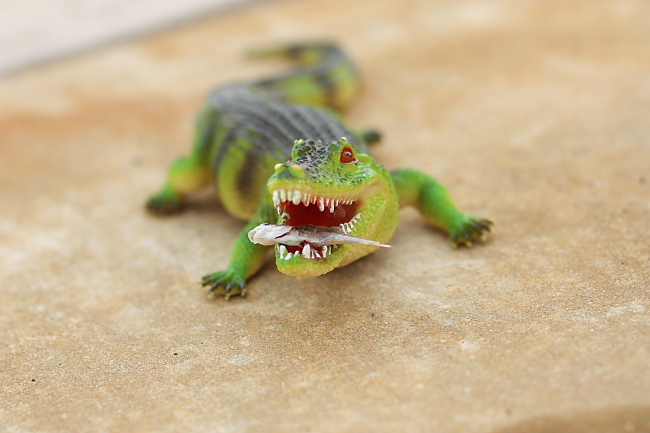 Meanwhile, in the background Herry is loading up on freshly caught dinner. 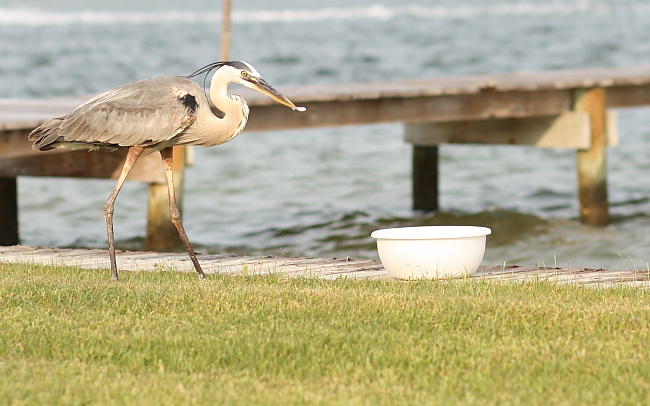 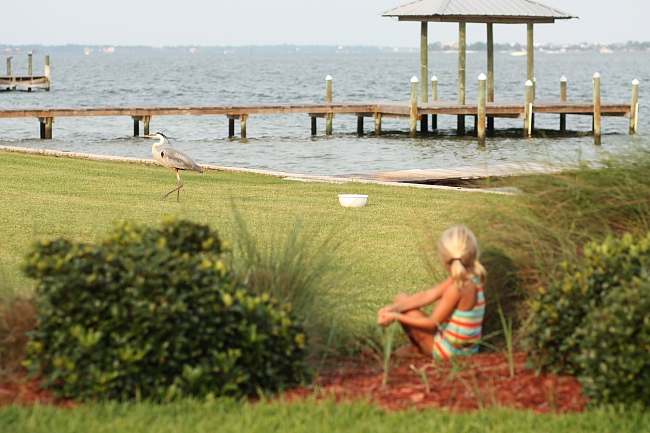 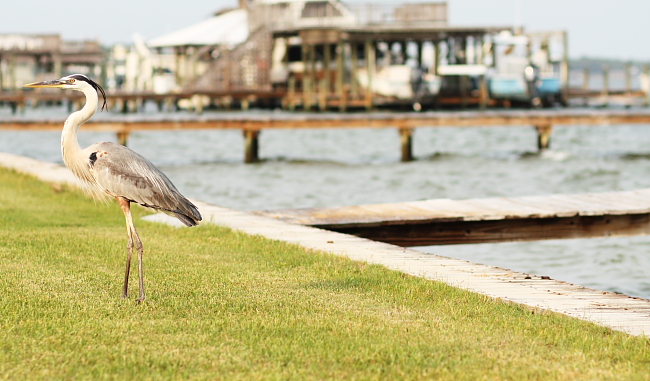 Then I snapped a few pictures of the kids, told Rover I forgave him, and the bird left full and happy. 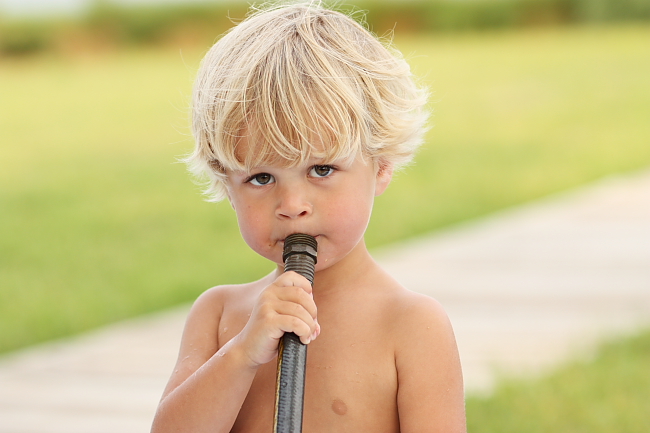 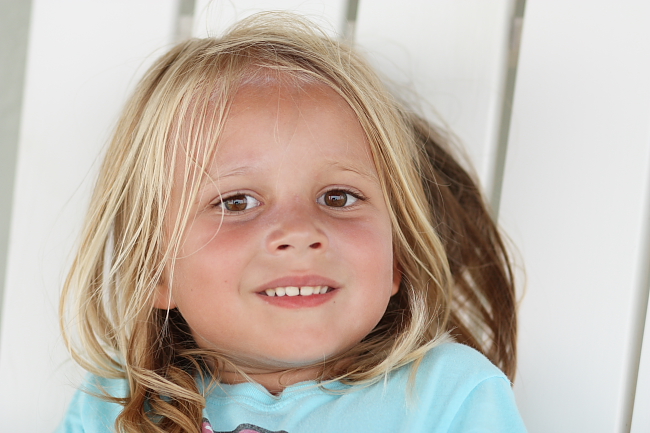 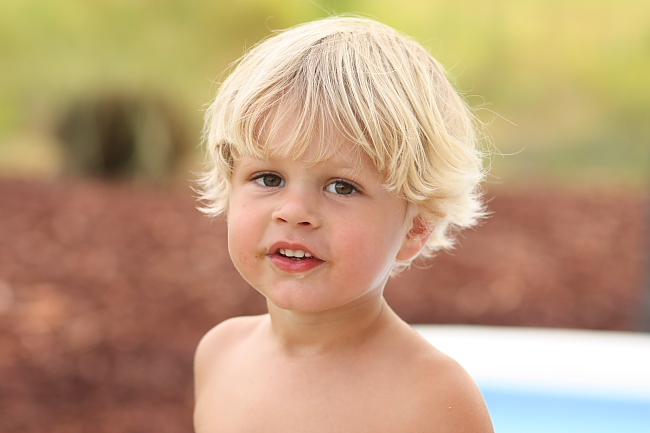 Our weekend also included a lot of sunscreen and boat time… I’ll be back with more soon!

The Sky’s the Limit