**warning… this post contains inappropriate language… I’m sorry I can’t help it sometimes**
As for the pumpkin muffins:
After 12 {yes 12} weeks I decided it was high time we actually all go somewhere besides the park. I fed the baby, changed his diaper and prayed that he would behave. I even allowed Morgan to go put her bathing suit on because she wanted to wear it under her clothes… don’t ask me! She’s 3. At Erika‘s recommendation we were on a mission to Sam’s for a box containing 3 packages of Krusteaz Pumpkin Bread Mix. {Which wasn’t anywhere where I thought I might find it and eventually after calling Erika and asking 2 employees we finally located it.} John Martin looks a little annoyed in this picture. He went from a little annoyed to “you’d think someone was stabbing him” annoyed. 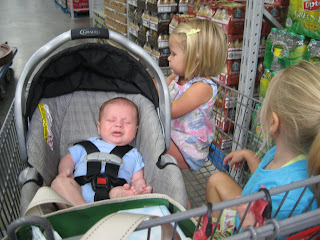 Yes, I took a picture {to share with my mother} because this was what I thought was going to be a monumental accomplishment. Well, my monumental accomplishment turned into a monumental disaster. I tried to carry him. Nope. Can’t push a giant Sam’s cart with one hand & hold a screamer with another. So I strapped him back in and ran like hell to get out of there. A little old lady thought it would be appropriate to stop me on my run for the cashier to ask me “what is wrong with your baby?” I explained that nothing was wrong. She continued on to tell me that “really something must be wrong with him”… I was in no mood to converse with her about whether something was wrong or not. “Out of my way old hag!” don’t worry I thought it but didn’t say it. We proceeded to the check-out lane where the cashier lovingly rolled her eyes at me and I wanted to ask her if she thought I was enjoying listening to him. Anyway, we finally made it to the car where he decided he would stop crying. I called Justin on the phone and told him I would not be leaving the house again with all 3 for at least 12 more weeks. And I thought to myself this better be the best damn pumpkin bread I’ve ever tasted or I may never speak to Erika again!

So, the pumpkin muffins were made from this… and wait the story’s not over yet… 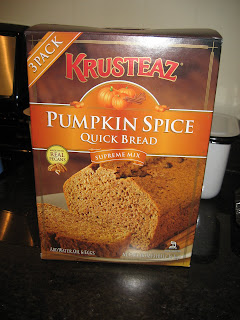 While preheating the oven to make the muffins my house begins to smell like smoke. What could it be? Morgan continued to say over and over again, “Mommy, something in our house smells nasty!” Well, lo and behold… we left taco shells in the oven from dinner the night before. They shriveled up, turned black and the whole house filled with smoke. I’d photograph them too but I threw the baking sheet on the patio and I see the family dog didn’t think they were too bad.

Were they worth it… yes. They were good… for quick bread! You can’t beat {no pun intended}: add water, oil, eggs & stir. I sprayed & floured the muffin pan too so they’d fall right now. They were especially good smothered in cream cheese that I creamed with a little sour cream & sweetened with a few tablespoons of sugar! Mmmm!

Last fall when I only had 2 kids my favorite recipe was Granny Kat’s Pumpkin Roll I really think I made 6 of them {Shireen, is this what you’re making?!}… it’s a little more involved than “mix and bake” but definitely worth it! Once I recover from this baking experience I may give it a shot again.

The shoes came from Shoe Carnival last fall and they say Brown’s Landing in the sole.

Moments of Joy in Days of Chaos!