I Can’t Believe I’m Posting This…

It should be illegal to post these pictures after posting my sweet little 2-year olds face yesterday… but there are two things I need to know. And since every time I ask y’all questions you come through with flying colors for me.
I am rather ashamed to be asking both of these questions. Neither have any importance from an eternal perspective but both are questions that have been on my mind the last 24 hours.
FIRST
Last night Justin took the girls to church and I stayed home with little man. He had a bath and was in bed by 7… so guess what? I was too. I crawled into bed and turned on the tv. Go ahead, cast your judgement… we have a tv in our bedroom! Thankfully we are self disciplined tv watchers… if such thing can exist. I waste about 30 minutes a week on tv. Usually it’s the very depressing news that I watch… or the weather. Anyway, you’ll never believe what I wasted my time on last night…. you really won’t believe me. I pushed in 3-3 on the remote. 33. That’s TWC {The Weather Channel}. And I pushed in 3-3 because I was too lazy to push 3-7 which is TLC {The Learning Channel}, so I just push 3-3 and then the up arrow 4 times to get to 37, which is where I was hoping to find Jon & Kate plus 8. Well, somewhere between 33 and 37 I found this: 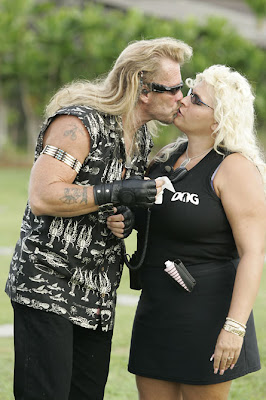 Dog: The Bounty Hunter. Yes, I watched it. The whole episode. I think I was so in shock by him and his wife, Beth that I couldn’t figure out what exactly is that they do. From what I gathered, they hunt down criminals who have warrants out for their arrest but they aren’t licensed law enforcement…?? Anyway, they catch these tool bags and take them to the police station and drop them off… already handcuffed. Then they’re off for the next tool bag. But, who pays them to do this stuff… besides A&E? They drive these pimped out cars and appear as though they aren’t too bad off. So, what is plaguing my mind {ok, exaggeration} is: who pays Dog to do this? That is what I’d like to know. And, if you are ever up for wasting your time jaw-dropping television… might I suggest Dog & his wife Beth. 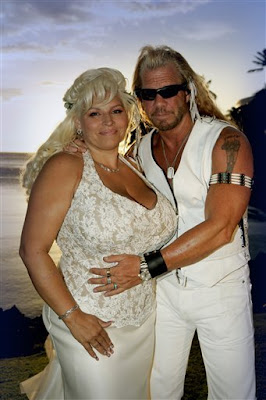 SECOND
I can’t believe I’m posting this either. This will probably show you that I’m still wearing high-waisted jeans and praying they come back in style soon. Heck, they probably are back in style and I don’t even know it. If it doesn’t happen on Dog: The Bounty Hunter or between my house and preschool… I just don’t know about it… seriously! Ok, so in recent outings around town {ie- Target, Winn Dixie, etc} I keep seeing these people with these purses… I see them everywhere. And I apparently haven’t gotten the memo yet because I don’t know what they are or where they are coming from. All I know is that they look like a big black and white giraffe print and apparently come with different colored straps! Can someone please enlighten me?
Thanks! 🙂
October 2, 2008
Share Tweet Pin it +1

My girls are BACK! All of them!