Every Major Accomplishment Deserves a Make-Over

First, let me start by saying, I love severe weather! Not what it results in physically, but I love the idea of hunkering down, riding it out, not leaving the house, and following the doppler radar. I also love that it just so happened to hit our area this morning preventing Mom from making her treacherous voyage home. Oh darn! She must stay at least one more day. Shortly before I informed her that she wouldn’t be leaving this morning I found this sweet note in our playroom.

She has been here for several weeks now, she briefly left on two occassions to visit with Erika & Chance at the beach with DaddyBoy. I can never stand the thought of her leaving. We’ve accomplished a few little tasks here and there but for the most part we’ve just been living life and when that involves 3 small children the day is done before you know it. I was so thankful and excited for one more day with her.

Speaking of excited, I cannot tell you how proud we are of Morgan. She has completely stopped sucking her thumb*. It was so much easier than I ever dreamed it would be. Justin and I have expressed to one another several times that we can’t believe it. She was not only a thumb-sucker but a hair twirler, and for her, the two coincided. Every morning she would wake with a giant “dreadlock” that she had twirled all night and rubbed with her fingers… and before I could get in there and “work” on it… she would rip it out. Yes, rip it out of her head. It was not out of the ordinary to find these giant “dreadlock knots” laying on the floor around her bed. She has 1/2 as much hair on the left side of her head as she has on the right, due to the ripping out of the knots. Since the thumb-sucking and hair twirling coincided, do away with one and you’ve done away with both! Now that is killing two birds with one stone. The child has never allowed me to cut her hair. She has always needed it long to twirl while she sucked. No longer my love. No longer.

So here’s what we did today…

Mom started the job by taking a little off the bottom. 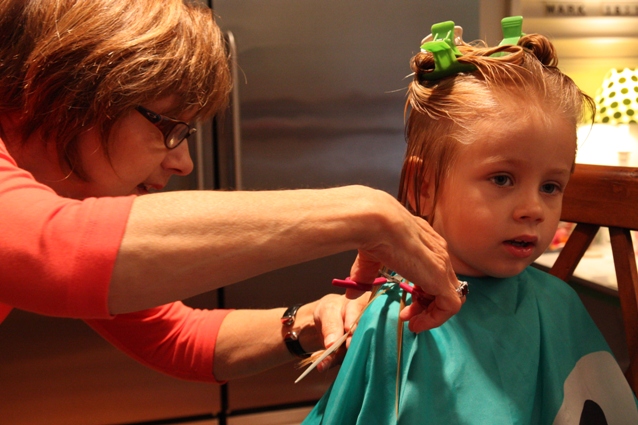 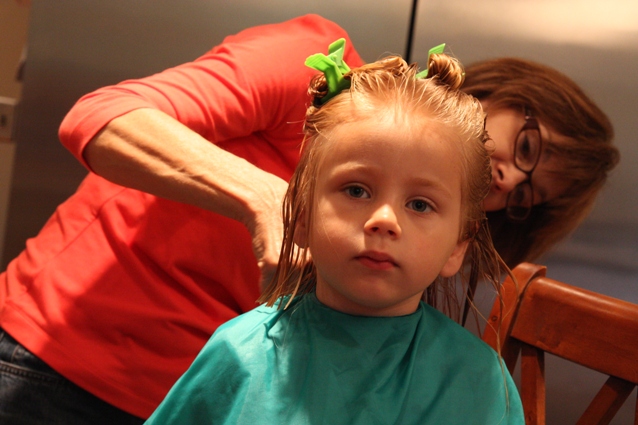 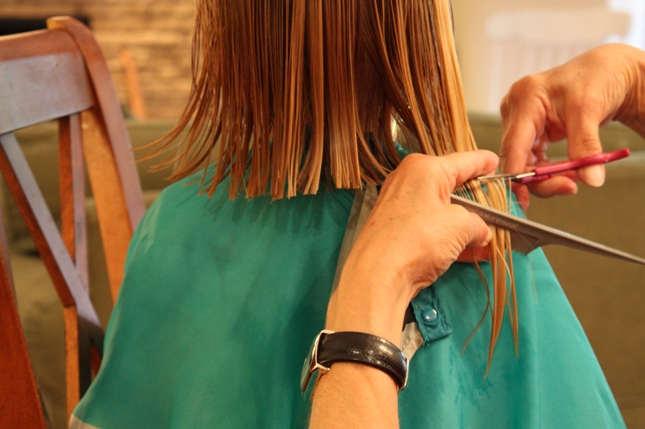 Then I took over to shape it. 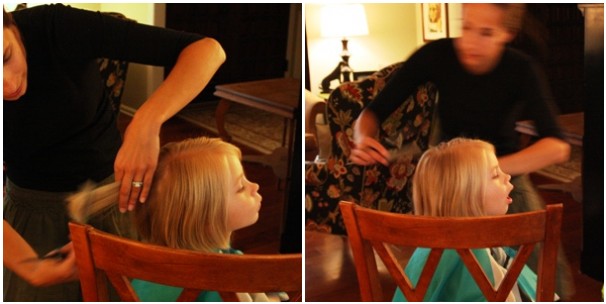 But I failed to give Mom a quick tutorial on how to use the camera and what angle would actually show the haircut in the picture rather than the back of the barstool. And boy, I sure was moving fast… you have to when you’re working on a toddler! 🙂

Towards the end it looked more like this. And Swiper must have been up to no good by the look on her face. 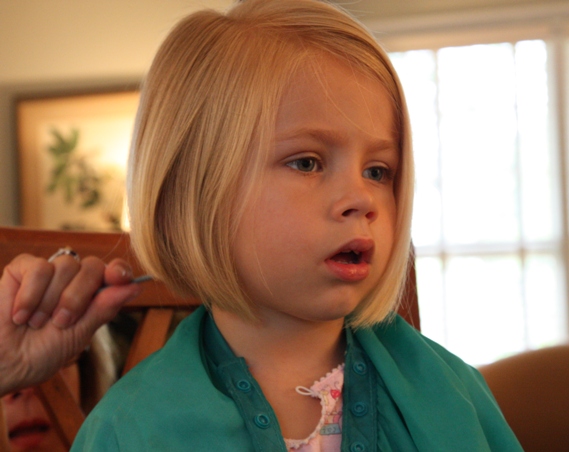 And… the results are in… she loves it. But according to her, “Mom, this isn’t at my shoulders!” And me, “No honey, but it’s close!”

She’s a new woman, with a new ‘do, and ready for a hot Alabama summer… as soon as all this rain dries up! And y’all are going to have to look closer to know if it’s Morgan or Paige. I’ve only called her Paige 3x today. 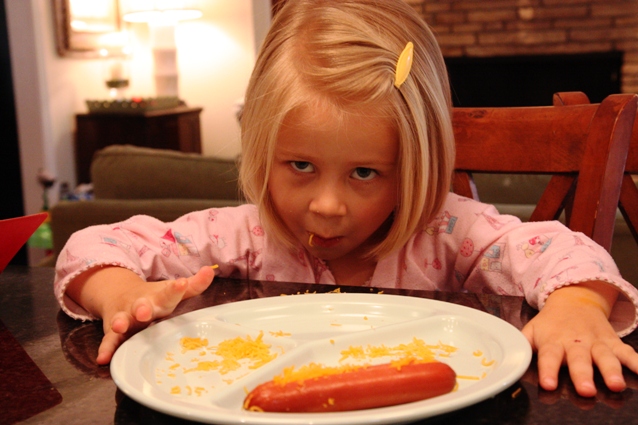 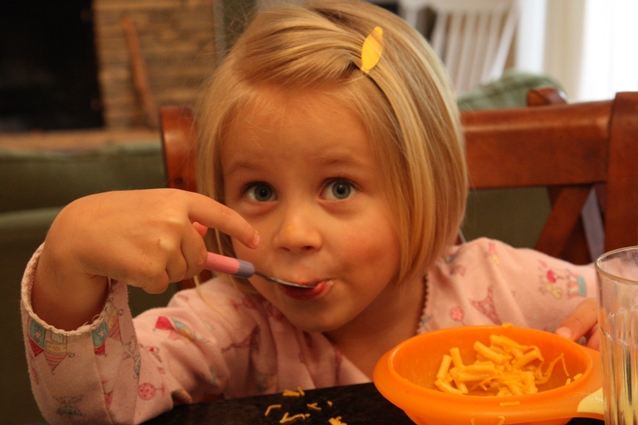 Some of y’all asked about my grassy eggs. The grass seed came from Walmart and it’s called Kwik Grass by Pennington Seed. 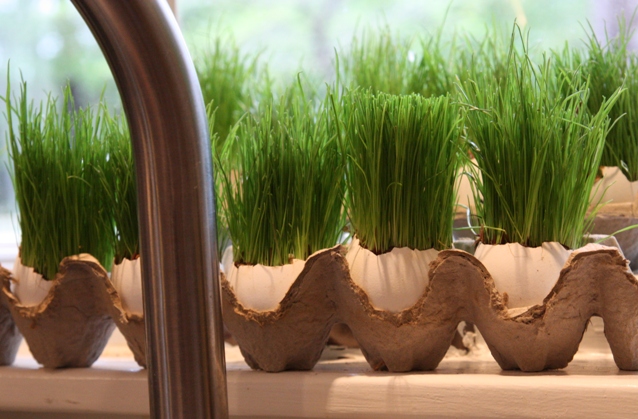 *for those of you with thumb suckers who might be interested in our tactics: First, as I’ve mentioned before I took her to ToysRUs to pick out a little incentive. We came home with a doll but she knew she couldn’t have it until she stopped sucking her thumb. So I hid the doll. We wrap both thumbs in bandaids or athletic tape before naps and bedtime and we’ve done a lot of praying. It has been a wonderful opportunity to teach her about our need of a Savior… not only for salvation but also for little things, like the need to suck our thumb. She has prayed every night for God to help her stop… and He has answered all our prayers. Ok, so back to the reward. I printed out a calendar {a cute one I found online} and at the end of 7 days I drew a doll and that day she will get her doll. Every day she goes without sucking she can add a sticker to the calendar on that day. If I catch her sucking we move the doll back one day {which hasn’t happened yet!}. If she continues to not suck and wear bandaids for 30 days we have offered a swing set. This is something the girls have wanted for a long time and something we have wanted for them. We are all hopeful to be completely broken of the habit long before 30 days but we figured a 30 day program was safe! And I keep telling myself a swing set is much less expensive than jaw surgery! 🙂