Mornin’ stalkers! {Let the pictures load. It will only take a second!}

Hope you all are well this Tuesday morning. Today we’ll be packing up and tomorrow we’ll be heading back home. Justin’s been bachin’ it since the 4th of July weekend, maybe you’ve noticed he’s not been around? Anyway, I’m not quite brave enough to spend 12 hours in the car with 3 kids by myself so my very gracious mother is driving us home. Bless her dear soul and Lord help us.
Yesterday was the most fantastic of all our days here {in my opinion}. As I mentioned before we took the kids to the zoo a couple weeks ago. I haven’t blogged about it because, quite frankly, it was hot and hilly the animals were rather lethargic. If it weren’t for a couple giraffes to make us laugh we might never darken the door of another zoo and we still may not.
Let me suggest a FREE alternative to a zoo… 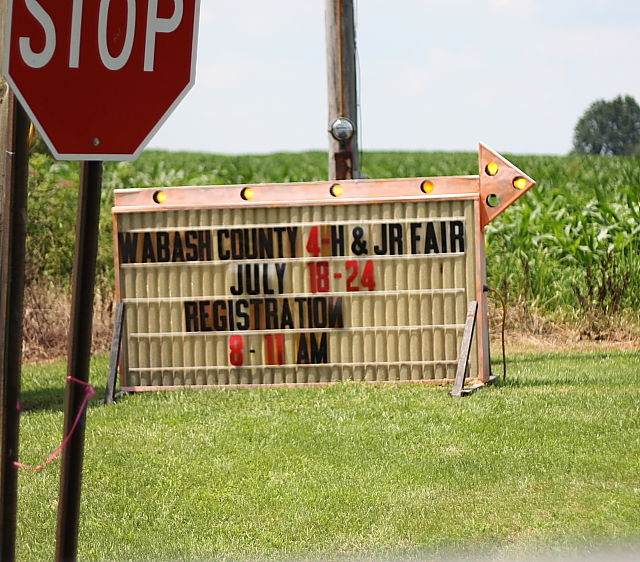 Free. The best things in life are free. This little county 4H fair put the big zoo to shame. I’m even thinking of going back today by myself.

Mimi was the one who suggested we go. She must know her grandaughter. 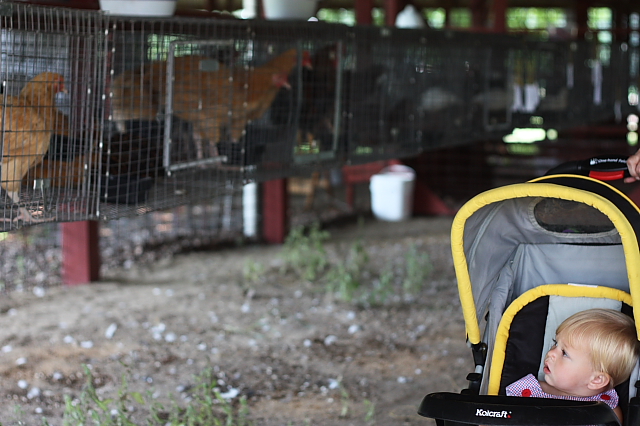 I honestly don’t know who had more fun me or the kids. There were chickens, rabbits, and pigs, Oh My! 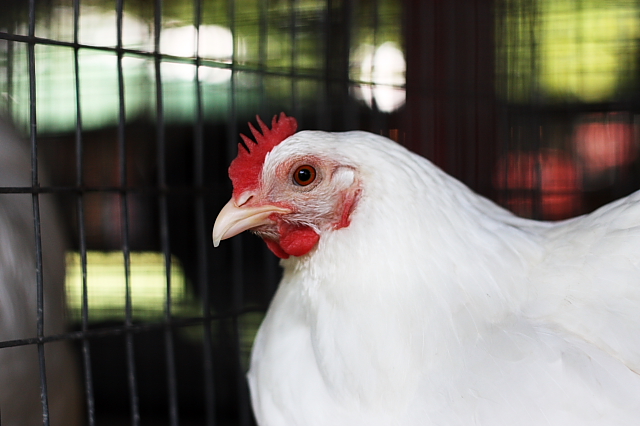 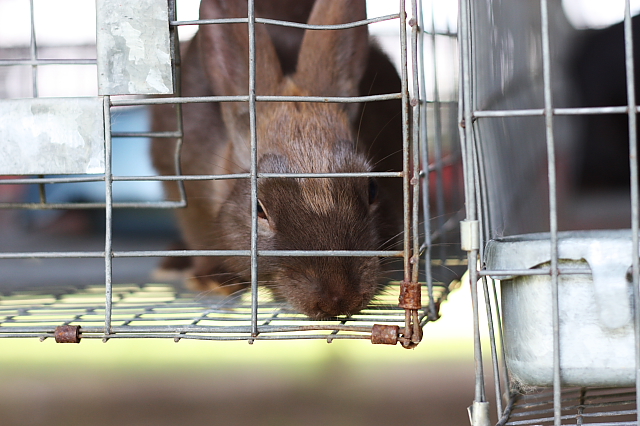 Do you all have any idea how dangerous it is to take me to a 4H fair? 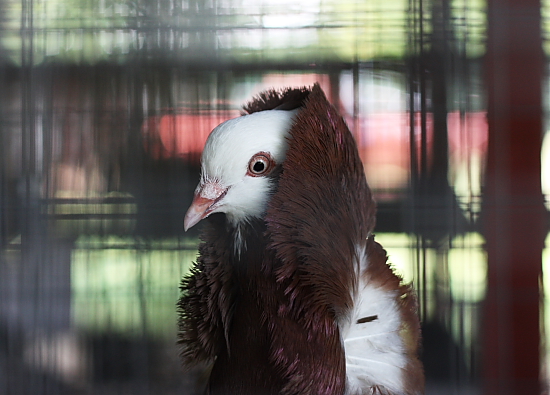 This was the only creature that I didn’t really want. A fancy pigeon with her collar up.

Oh, and I didn’t want the guineas either. 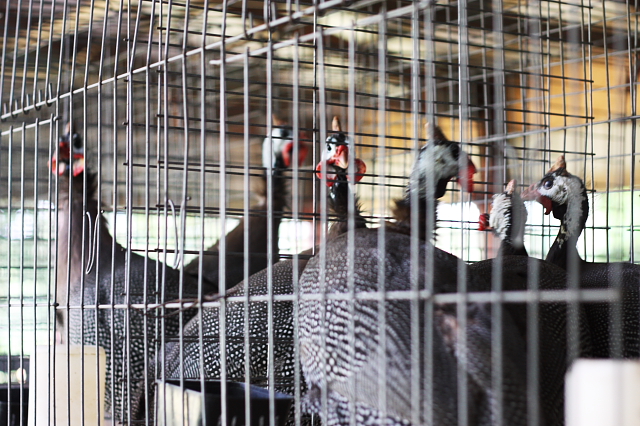 Have you ever heard a guinea? 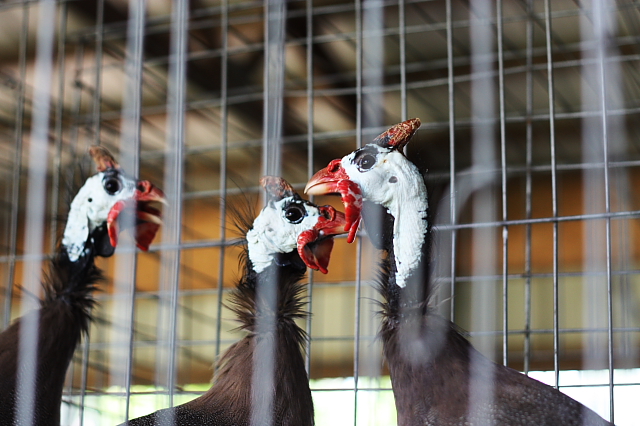 They’re like roosters on crack. I had to find someone who looked like they knew what they were doing and ask, “Are those guineas always that obnoxious?” He said, “No. Usually they’re worse. They’re the best watch dog you could ever have.” So, friends, if you want to drive you neighbors crazy and keep the robbers at bay go get a flock of guineas.

The kids loved it. 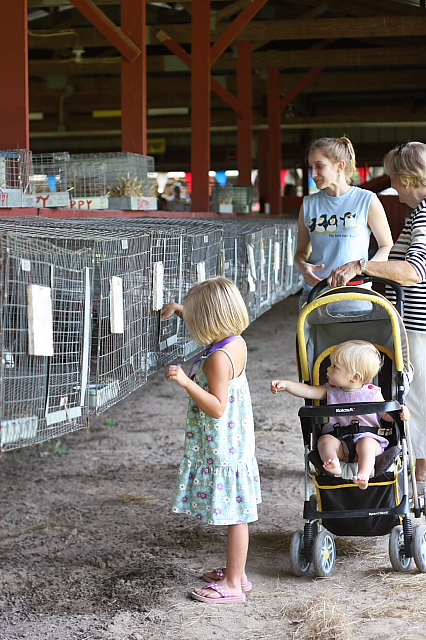 This girl dominated the rabbit exhibit and told us which rabbits would bite. But my kids put their fingers in all cages regardless of whether they bit or not. Thankfully we made it home with all our digits. 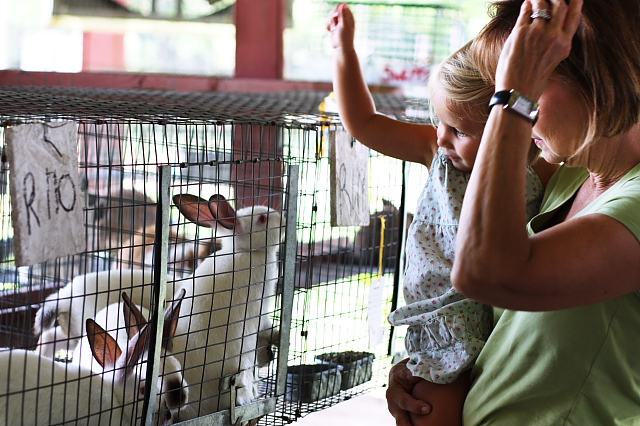 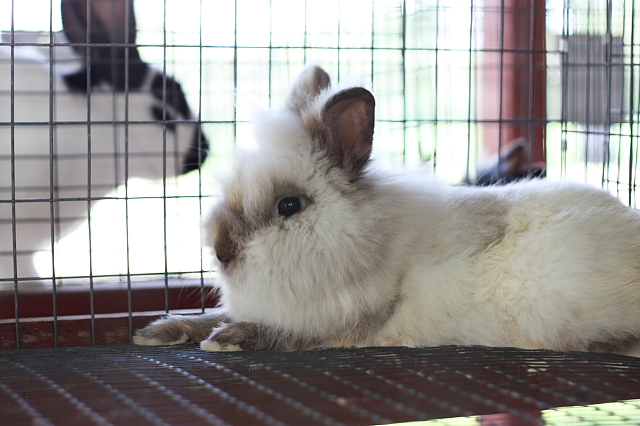 And some were tattooed. 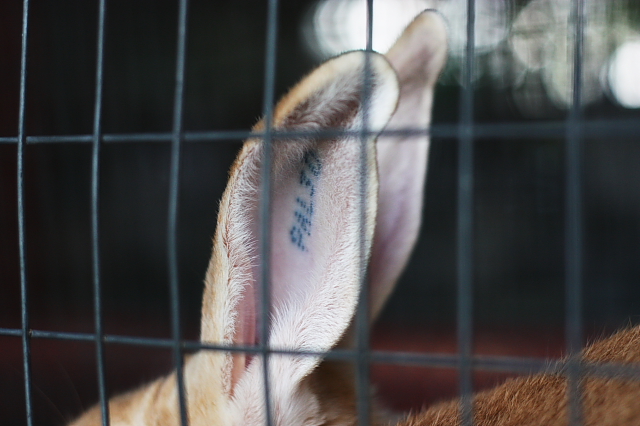 There were pigs too. 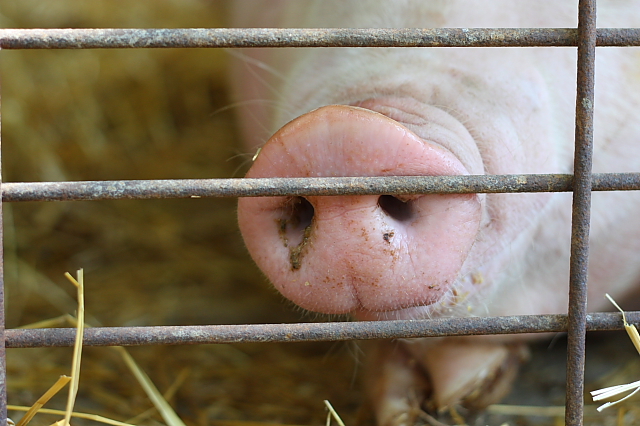 They were so thirsty. 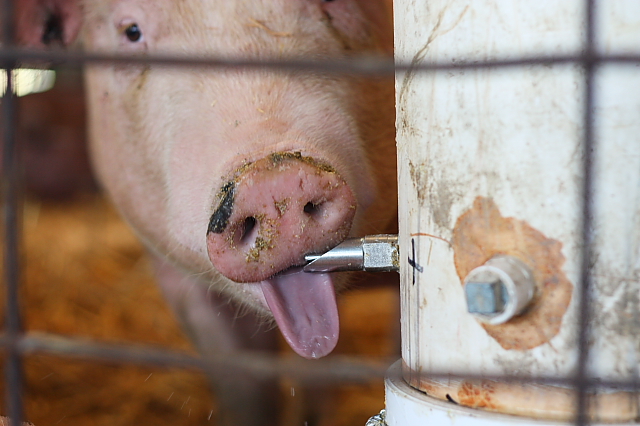 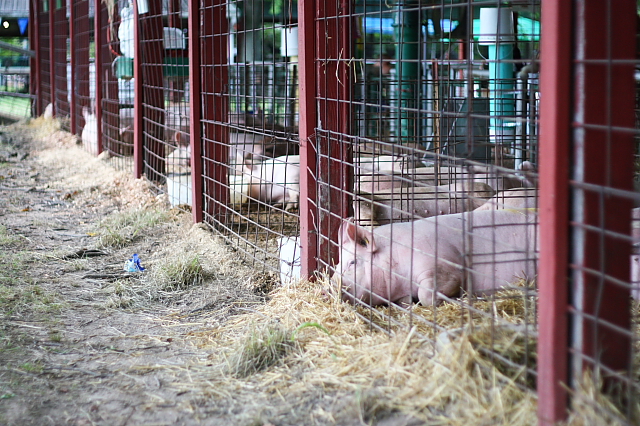 The boys who own the hogs were so proud and I was so proud of these boys. Aren’t they cute? I could hardly keep up. They were pointing and telling me who’s hog was who’s. 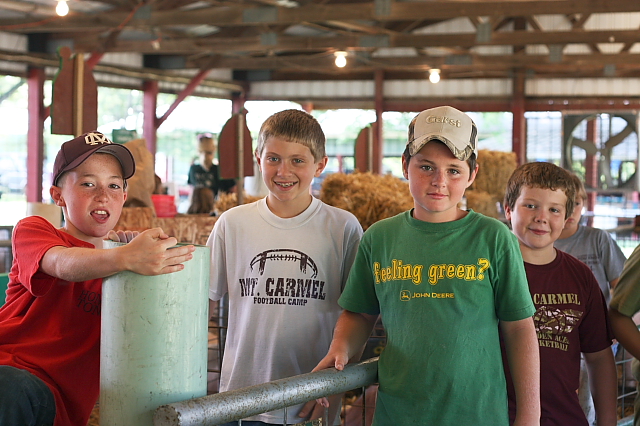 The one in the white nearly killed himself to get his hog to turn around so I could feed it a marshmallow. He finally got it turned around and then I accidently dropped the marshmallow and getting down in front of a 400 pound hog to retrieve a marshmallow was out of the question, for me at least.

Second to the guineas, this little sheep got the “loudest participant” award. 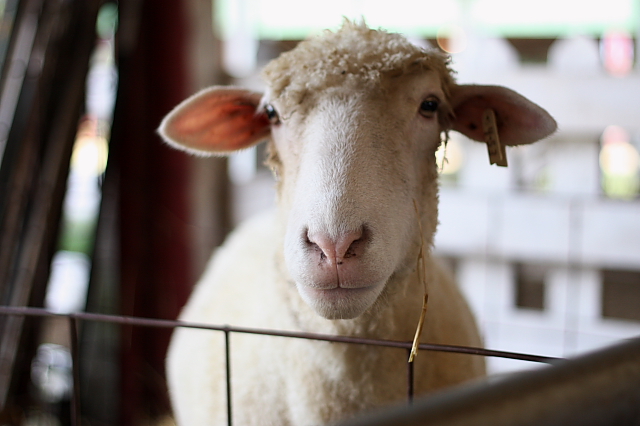 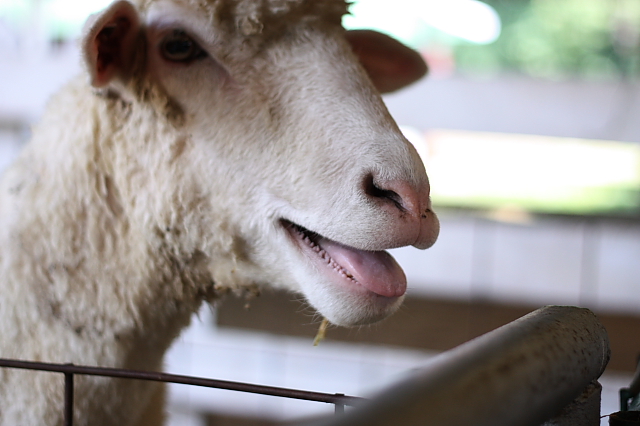 And I don’t think it was to have it’s picture made.

I caught up with the rest of them at the goat exhibit. By the way, the crowds were so slim. If you see anyone else in our pictures, they were likely participating in the fair. Most of the kids thought I was with the newspaper. I can’t imagine what would give them that impression! 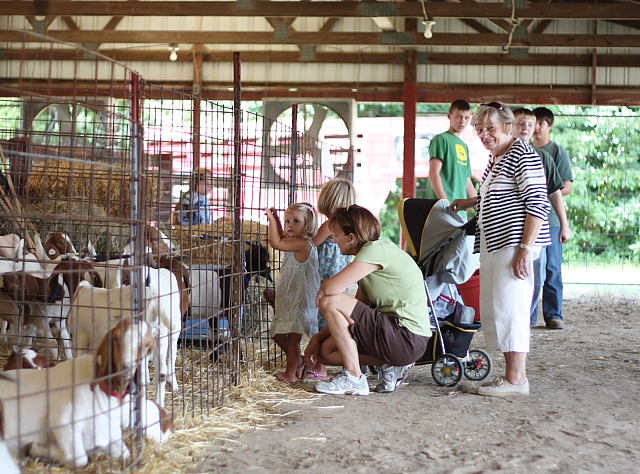 The goats were my favorite. Mom couldn’t resist either. Those furry little lips were so soft! 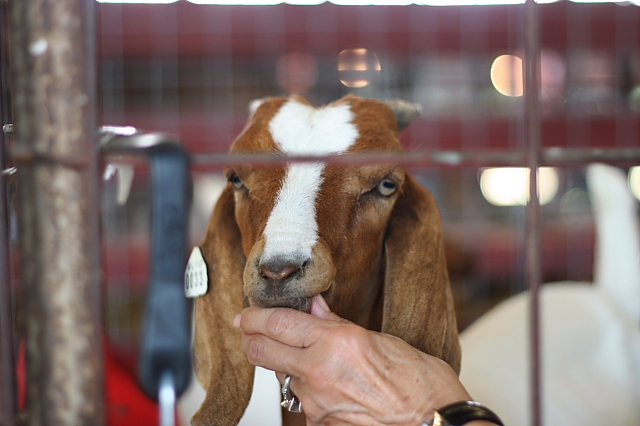 This one wanted to escape. Must be why Billy had a collar on. 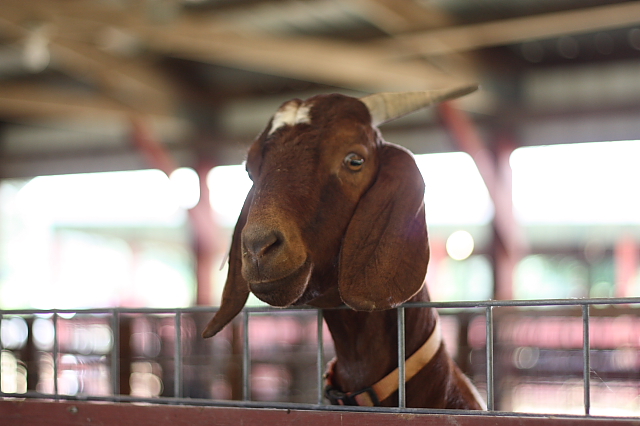 This girl made me mourn being a city slicker. 4H was never an option at any of the schools I ever attended. 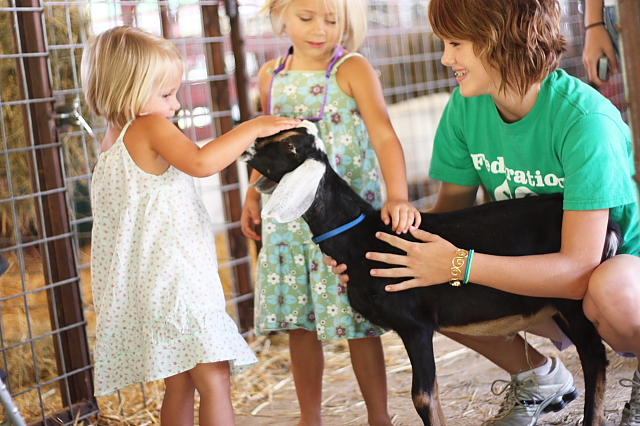 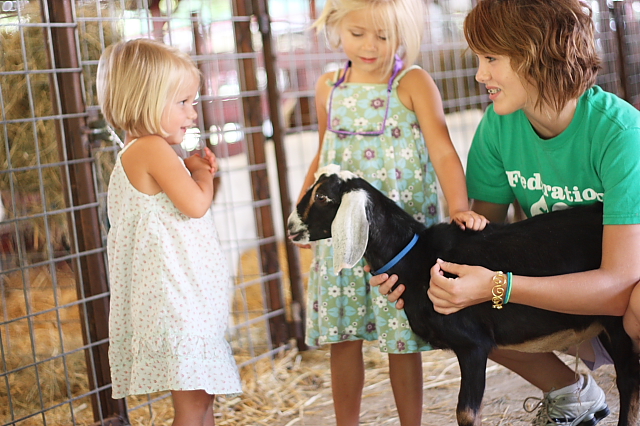 She was so sweet and totally dominated the goat exhibit.

Mr. Mouse even got in on the goat action. 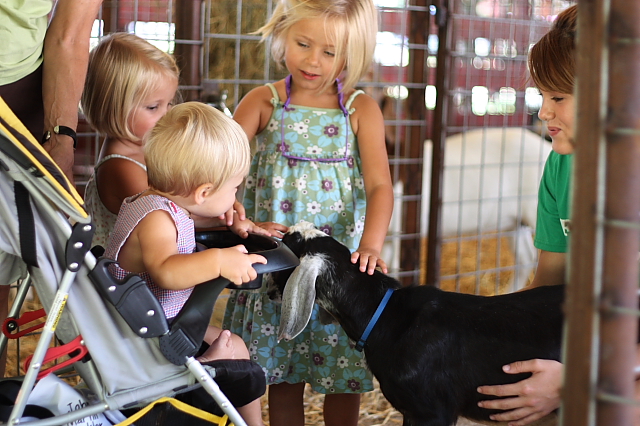 And I did too.

I spotted this very full {or so I thought} dairy goat. 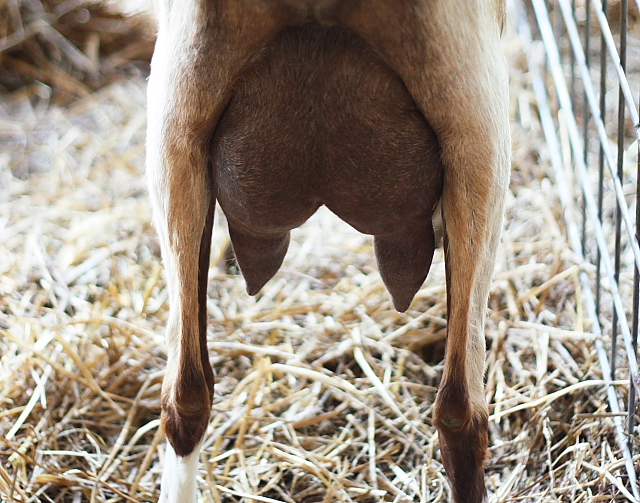 I asked the girl if she was really full or if that was normal… “normal,” she said. Then she said, “Do you want to milk her?”

I mean, seriously, when will I have another opportunity to milk a goat. 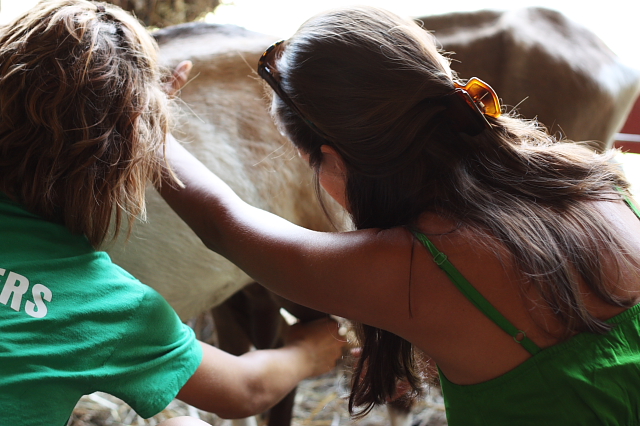 As I placed my hand on the goat’s boney back, she explained that the milk takes the fat from the goat. I wanted to tell her that lactating had a similar effect on me. But she was in high school and I didn’t want to totally wig her out nor did I want to compare myself to a dairy goat.

Have you ever milked a goat? It is extremely difficult. Thankfully they only have 2 teats. This young lady milks 3 goats twice a day. She also has hands and forearms of steel. I tried and a little stream would trickle out and then she’d show me and milk would squirt out hard and fast and then I’d try and a little trickle would come out. She definitely needs to be the 4H queen. They pasteurize all the milk and drink it. She explained how good fresh goat milk is and how good it is for you. I wanted to try it. So I put my head up under her teat…. no just kidding. 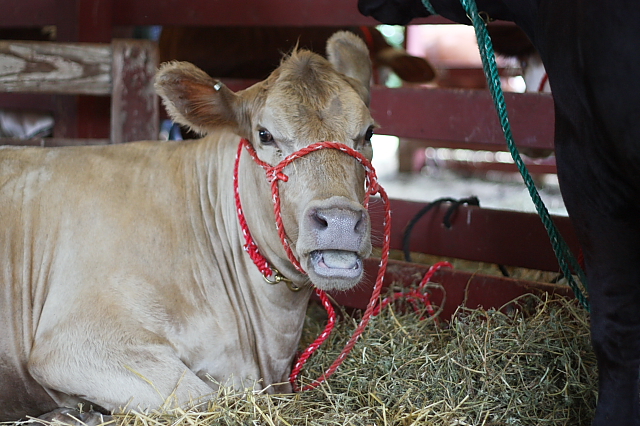 This one was a beautiful champagne color. The owners explained her mother was a Charolais and her father was an Angus. I thought she was beautiful. Her owner did too. These kids are so proud of their animals and all wanted their pictures made with them. 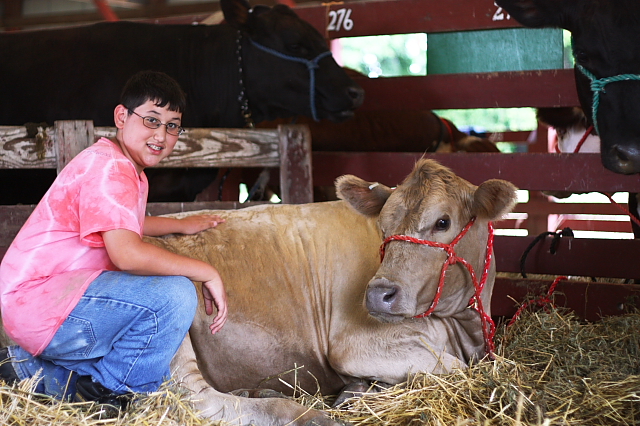 This is for my friend, Everlie. She used to show dairy cows and was the 4H state champ back in her day. This 4H fair had one dairy cow. And it didn’t even have any milk yet. But her owner was as proud as he could be of her. 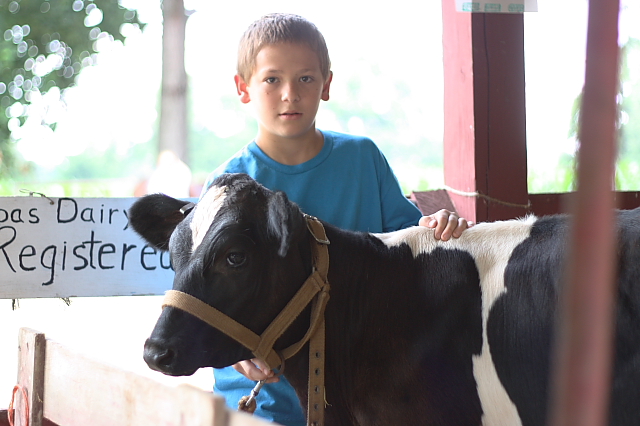 And for my sister, there were inside exhibits too. And one lonely participant in the Interior Design category. 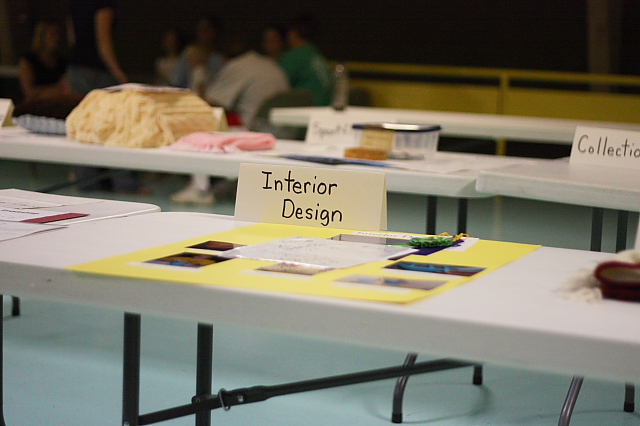 Ok, time to start scouring the house for all our belongings that are scattered from one room to another.

The Wreath, The Chandy & The Bedskirt

"the old has gone, the new has come"