Viola “May” Johnson.
A woman I never knew. A woman I wish I had known. 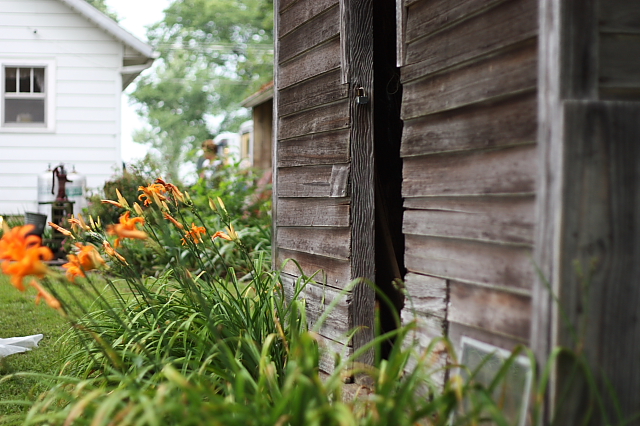 Mother and I spent last Saturday morning at the auction of her estate. It was held just around the corner from my parent’s farm. To say that it was an emotional experience would be an understatement. I turned to mom and said, “Is it okay for me to cry at an auction?” She said, “Yes. I feel like crying to.” I was mourning the loss of a person I never knew and more than that, I was mourning the fact that her belongings, her history, her home, her land, the works of her hands and what was left of her earthly life were all abandoned to an auctioneer. From what I can tell of May and what I’ve since learned of her, she was an extraordinary woman.

We came close to not going, it was raining and we questioned whether or not it would be worth outfitting ourselves in rain gear and dredging through the mud to see what was left of the 94-year old woman’s belongings. Her real estate was to be sold first followed by her belongings, which included everything from her toilet paper to her car. The auction flier advertised “this home is crammed full of an unbelievable amount of small collectibles”. That can be good or that can be bad… we would only know if we went, so we did. 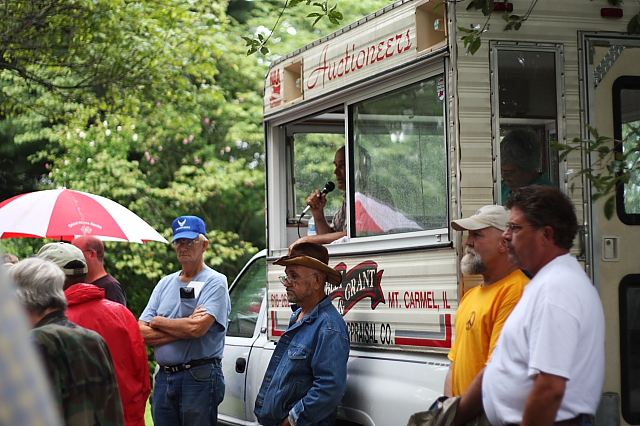 My aunt and cousin kept the kids. We clothed ourselves in slickers and I zipped my camera bag up under my rain jacket, which made my jacket extremely tight, hot and uncomfortable, but I’m glad I did it. And we were glad we went. We thought the rain would be to our advantage and hinder others, unfortunately everyone else had the same idea.

My parents have always gone to auctions. I’ve only been to a handful, but those I have been to have not only been entertaining, but also, memorable. This one was no different. It was an absolute auction, meaning there were no reserves. They started with her 3 bedroom house that sits on a beautiful acre and a half of land with 3 outbuildings, mature trees and blackberries like I’ve never seen. It went for a measly $28,000. This is when the lump appeared in my throat and I kept telling myself not to cry but I could hardly contain myself. I cried because something so beautiful can’t be sold for so little. I also cried because I wished I could buy it, although, I knew how unreasonable such a thought was. I kept telling myself people pay more for cheap cars than this.

I went through the house. 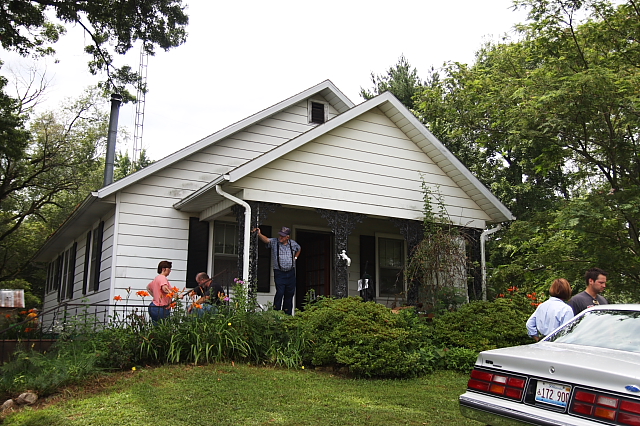 The inside of the house was not updated, nor was it necessarily beautiful. But it did have hardwood floors and I imagine it had a lot of stories to tell if it could. Each room was brightly painted; I could tell May loved color! 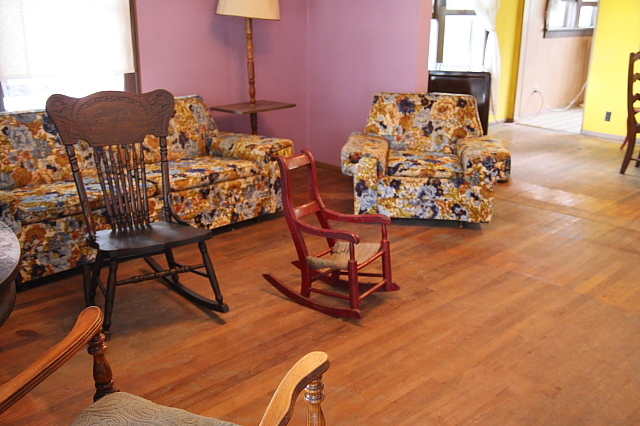 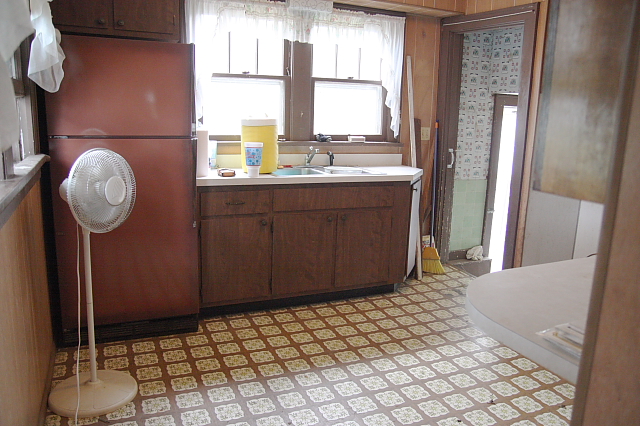 After I went through the kitchen, I continued through the doorway you see and made a right hand turn and found the stairs that led to the basement. You can imagine my surprise when I reached the bottom of the stairs. The lump came back in my throat. If you’ve ever canned anything you can appreciate what I saw. 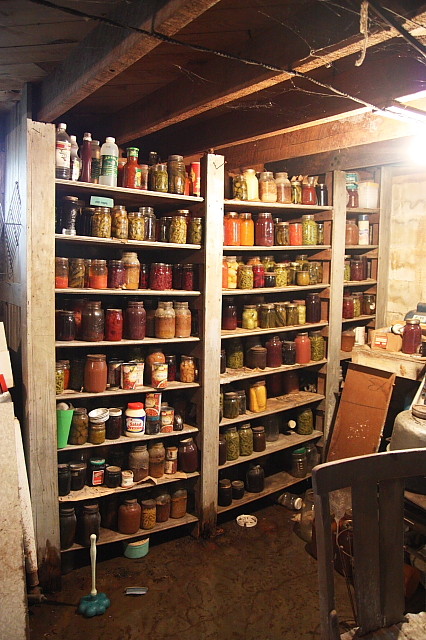 I couldn’t believe my eyes, nor could I resist taking pictures, a lot of pictures. 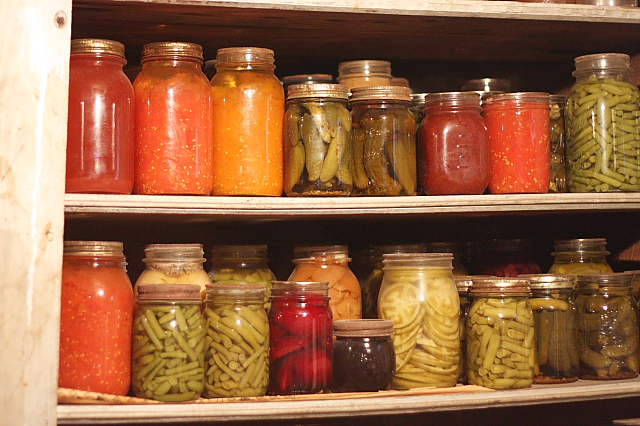 Do you have any idea how many hours May spent standing over a hot stove to can all those jars? Some dated as recent as 2006; she would have been 91 years old standing over the stove canning her vegetables {that I imagine she grew} and the blackberries that she picked. 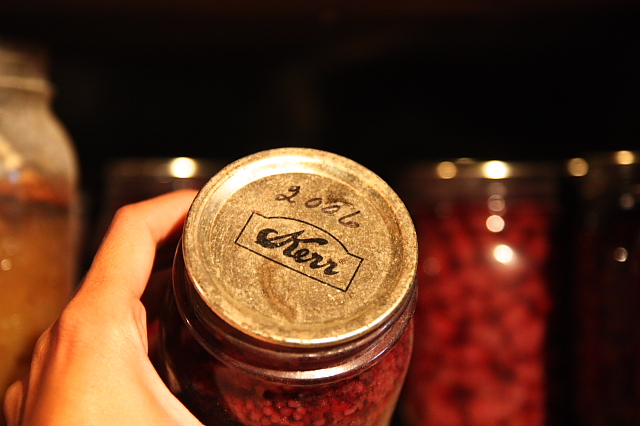 I had no desire to crack open any of her jars but I certainly could appreciate her efforts and time. There must have been 200 unopened jars in the basement.

After nearly falling over at the sight of the jars I walked to the other side of the basement where I found her old washing machine and stove. It appeared as though both died mid-cycle. 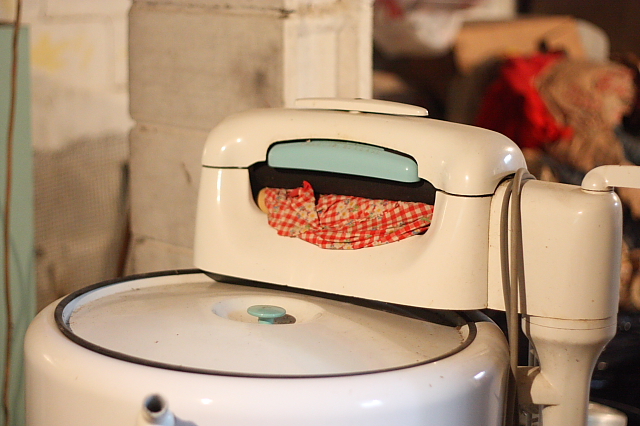 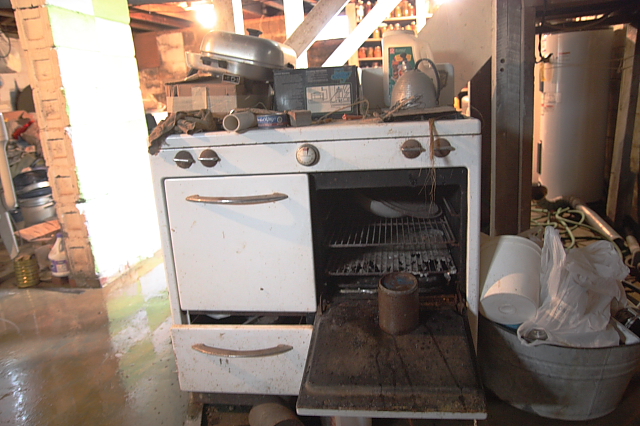 The auction continued outside. People hovered over hay trailers that were placed around her yard, covered in belongings that were destined for the auction block. 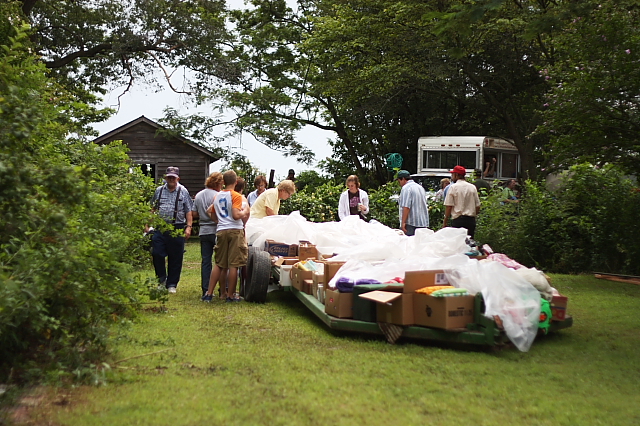 It didn’t take long for me to realize that May wasn’t much of one for getting rid of stuff. Radios, owl lamps, family pictures, a wedding gown, quilts {all done by hand}, glass jars, jewelry, dolls, toys, scissors… and the list goes on and on. You name it, she had it. 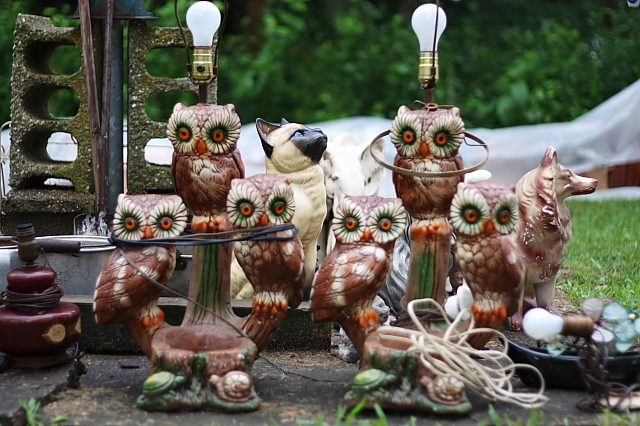 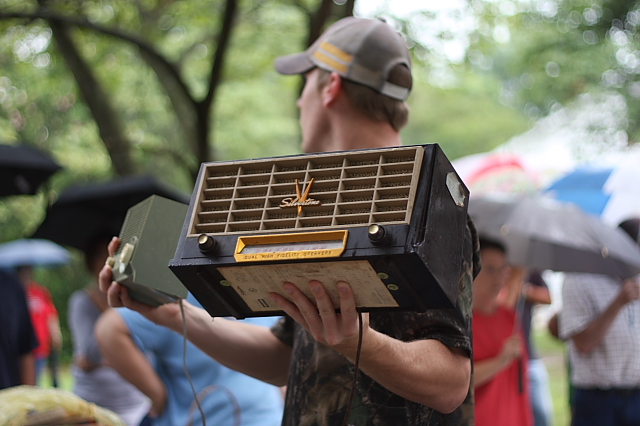 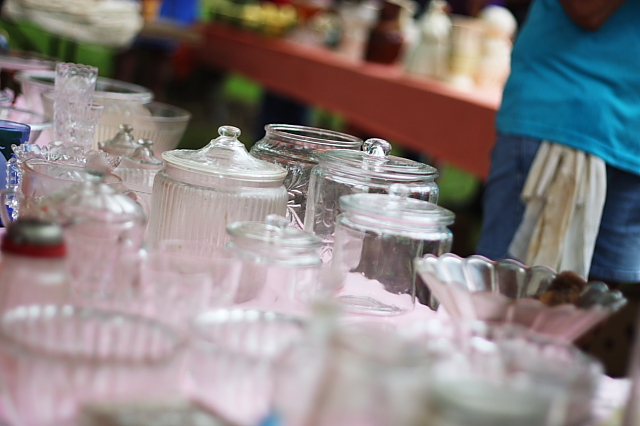 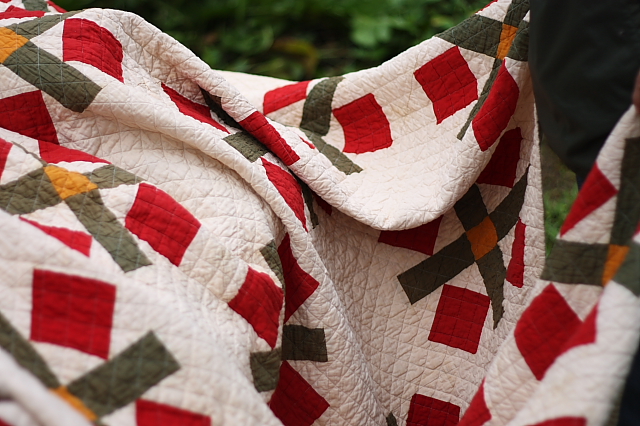 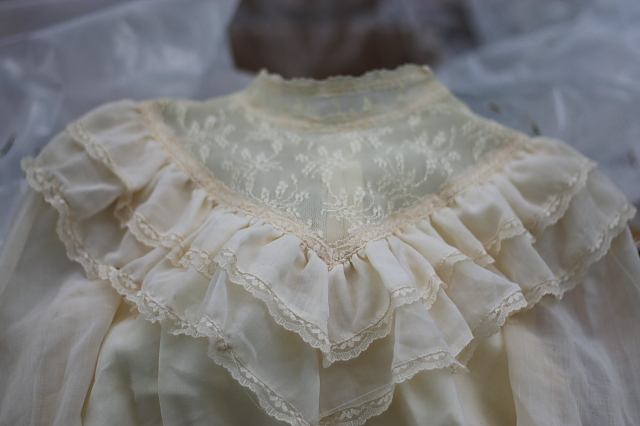 May never married and I can only wonder if she bought this wedding gown on clearance {the price tag was marked down to $20} with the hopes that one day she would wear it. It was beautiful.
Her obituary offered little insight to her life, but what it did tell, I already knew from being at her auction; that she wasn’t married, nor did she have any children. My great aunt, Martha, was kin to May. After a few emails back and forth she’s confirmed all my suspicions about May. I knew if she had living children or grandchildren most of what was up for auction would have certainly been claimed and I knew by the sight of her basement, yard and belongings she was one hard worker and a fine homemaker.
Here’s what my great aunt Martha had to say about May:
SHE WAS ALWAYS A HARD WORKER AND LOVING PERSON. THE LAST TIME WE WENT TO SEE HER AT HOME SHE JUMPED INTO THE CAR AFTER I GOT OUT ON MY SIDE AND GRABBED BOB {my great uncle} FOR A BIG HUG BEFORE HE COULD GET OUT. SHE ALWAYS GAVE US SOME CANNED BLACKBERRIES TO TAKE HOME WITH US AND SHE SENT ME SOME FAMILY PICTURES LAST YEAR THAT SHE THOUGHT I MIGHT LIKE TO HAVE. I LAST SAW HER IN THE HOSPITAL AT EVANSVILLE. MAY NEVER MARRIED OR HAD A CHILD. THROUGH ALL THE YEARS I NEVEREVEN HEARD OF A BOY FRIEND. SHE ALWAYS SMILED AND SEEMED HAPPY. UNCLE JOHNNY AND AUNT DORIS NEVER HAD ANY CHILDREN OTHER THAN MAY. SHE WORKED SIDE BY SIDE WITH THEM IN THE FIELDS AND ON THE FARM ALL HER LIFE. WHEN THEY DIED ALL THE FAMILY WERE HAPPY TO SEE MAY GET THE FARM WHICH SHE SOLD AND BOUGHT THE LITTLE HOUSE SHE LIVED IN FROM THEN ON. SHE WAS ALWAYS A HARD WORKER AND LOVING PERSON.
May kept every card ever sent to her. She didn’t keep junk mail. She kept letters and cards that were important to her, from people she cared about. 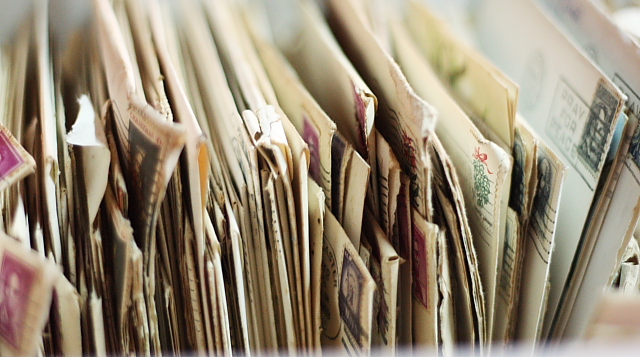 She also kept every Valentine she ever received. Guess who was the highest bidder? Me. I couldn’t resist. They’re gorgeous and there are nearly 100 of them, if not more. 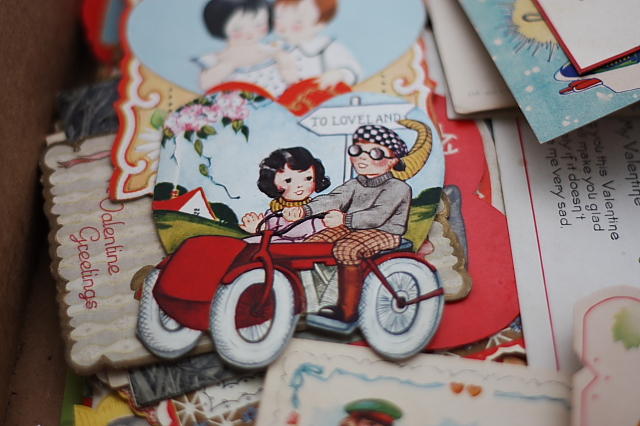 Mom was the highest bidder on an old doll high chair. She’s cleaned it all up and her granddaughters love it. 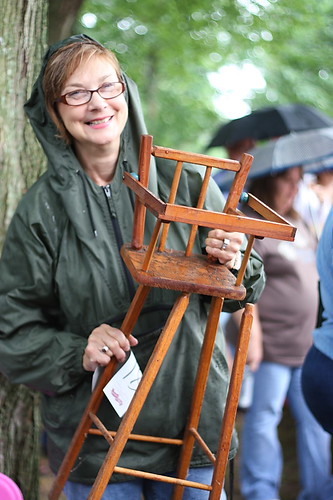 I also bid on and won the frog and dog for John Martin’s bookshelves. 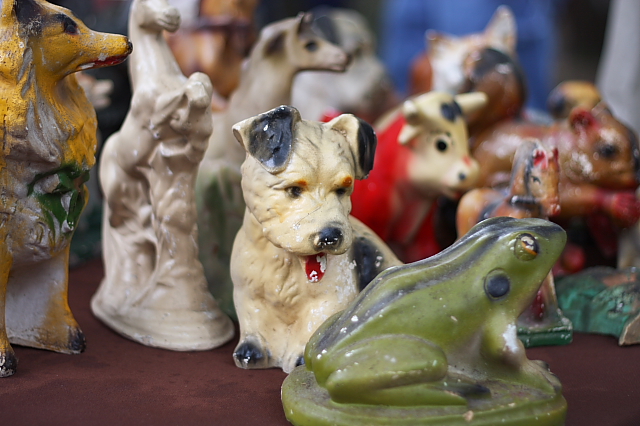 If you’ve never been to an auction and bid on something, it’s so exciting. It will make your heart race; the auctioneer talks so fast I couldn’t help but wonder if I was bidding against myself.

The auctioneer came out of his trailer to sell a few things. 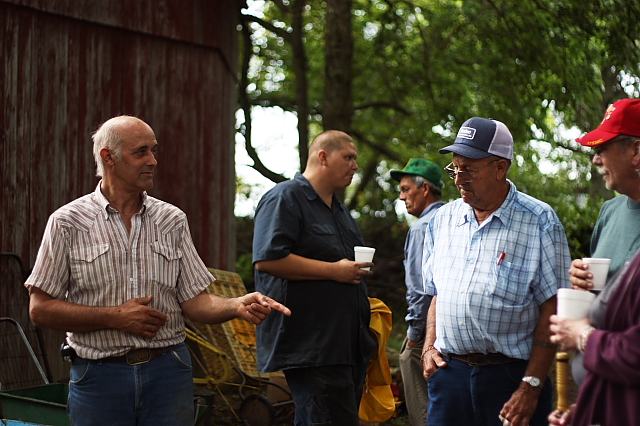 The man in the red hat was bidding against the man to his right {in the blue hat} for May’s tiller. 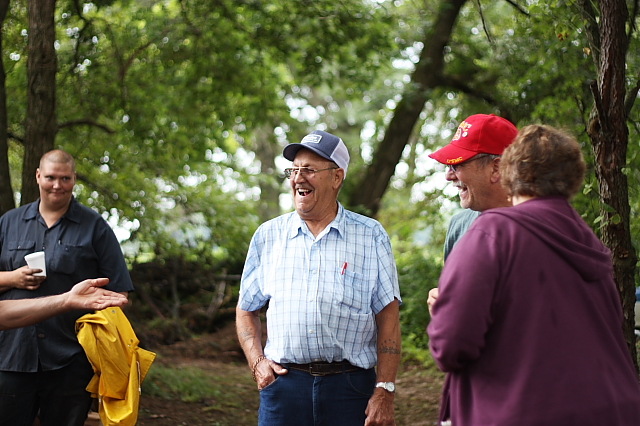 It was so fun to watch them. 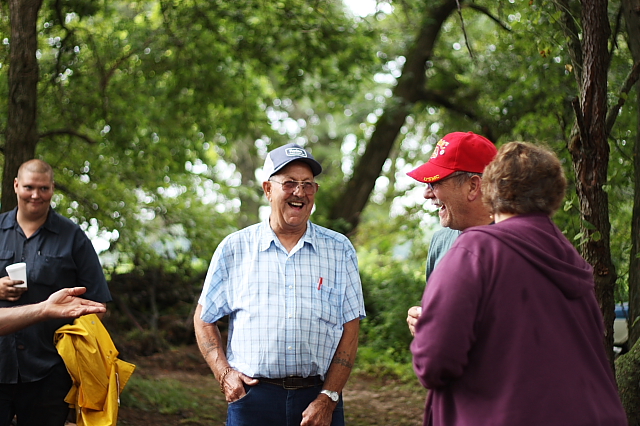 The man in blue kept looking down at the tiller, like he was measuring her up, to see if she was worth it. 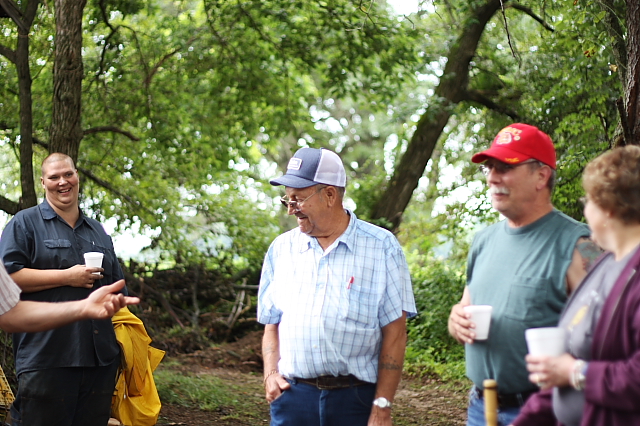 She was a beauty, but in my opinion not worth the price she went for. That’s what happens at an auction when two people want the same thing.

May had a few little toys. Because she didn’t have any children of her own, I imagine these were around for nieces and nephews. 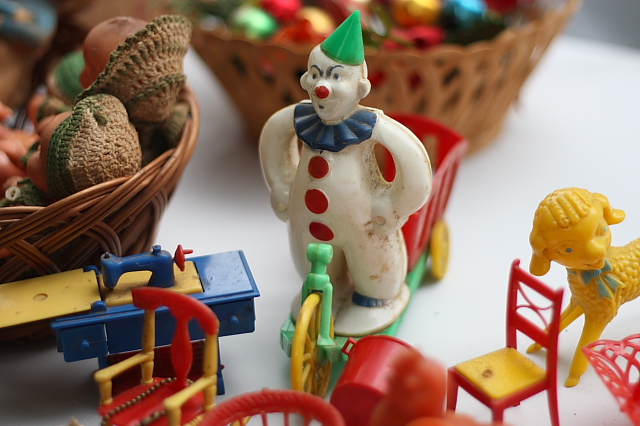 This one was my favorite. It was so very small and fit in the palm of my hand. 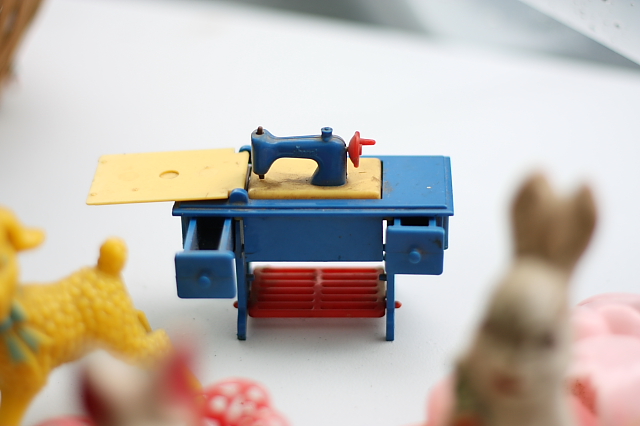 There were so many things that I saw that I would have like to bid on but an auction takes, what seems like, forever. We only had a few hours which wasn’t nearly enough time to get even half way through the sale; they were likely there all day. It’s probably best that we didn’t stay, otherwise, I would have left with much more.

I did happen to bid on and win a necklace that belonged to May, I paid $12 for the necklace {and a pair of matching earrings}.

Two oranges hang from each little gold branch along with a green leaf. I thought it was so unique and beautiful. Clearly it isn’t meant to be paired with a grey and white tank top but by the end of the auction the sun had appeared and my rain gear was gone.

If you’d like to see more of what I saw and captured at the auction you can do so by following this link to my Auction set on Flickr. It was certainly a Saturday morning for the record books and I’m grateful for the opportunity to learn more about May Johnson, if only it would have been this side of eternity. I hope we can meet up on the other side, I think we’ll be good friends.