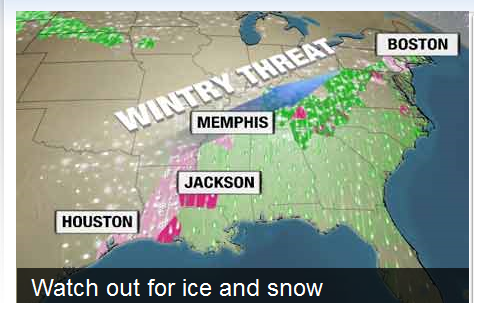 I have a confession…
I love severe weather.

I love the idea of hunkering down and riding out a storm. I inherited that from Daddy Boy. When we were little he {and mom} both drove Jeep Grand Wagoneers and they drove them because they had 4 wheel drive and we mostly lived where snow was inevitable. Mom’s was white {Jill} and Daddy Boy’s was black {Jack}. And Jack and Jill could climb hills to fetch stranded motorists in snow storms, which I’m pretty sure is why dad bought them.  I have such fond memories of my dad loading us into his Wagoneer after a big snowfall, he’d always bring a chain and we’d go on a search for stranded motorists. Then we’d get back home and Mom would have hot chocolate and buttered toast for us {mmm… you should try it} and Daddy Boy would get suited up in his snow gear, and camo ski mask and crank up the John Deere riding lawn mower that had a snow blower attachment mounted on the front. He would leave for hours, scraping every person’s driveway on our street. Anyway…  I love severe weather, not the kind that is super severe and hurts people, just the mild kind that gets kids out of school and makes people turn on the weather channel… and guess what, we’ve had no severe weather and I dare say, I might even like hearing about severe weather more than I like experiencing it. I’ve been living vicariously through my family that live in Illinois. And I’ve especially enjoyed the play by plays from Daddy Boy and Cousin who both rode it out in Chicago.

So, in honor of snow storms and the month of February I made peppermint patties with pink peppermint! 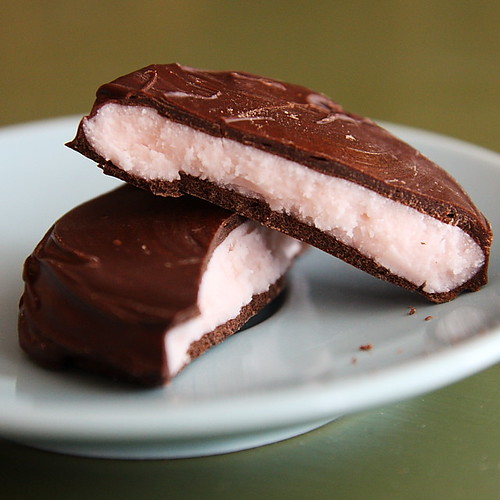 Now, I won’t lie… I thought they were going to be super easy, which they were…. u  n  t  i  l,  I got to the step that said “dip your peppermint patties into the chocolate, coating well on both sides”. There was no “dipping them in warm chocolate” because the peppermint fillings were soft and pliable and dipping them in the warm chocolate proved to be completely disastrous and impossible. I’ll start from the beginning… with the short list of ingredients {recipe link posted at bottom}

It started off fairly easy… with mixing the powdered sugar, condensed milk, and peppermint extract in the mixer… and I added 1 drop of red food coloring for a soft pink peppermint filling. I, of course, had a few eager helpers. 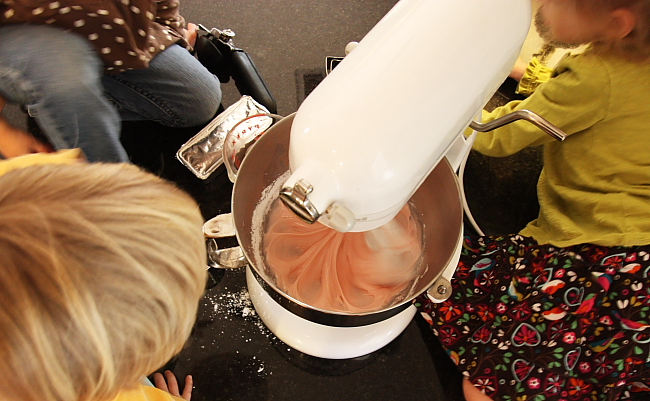 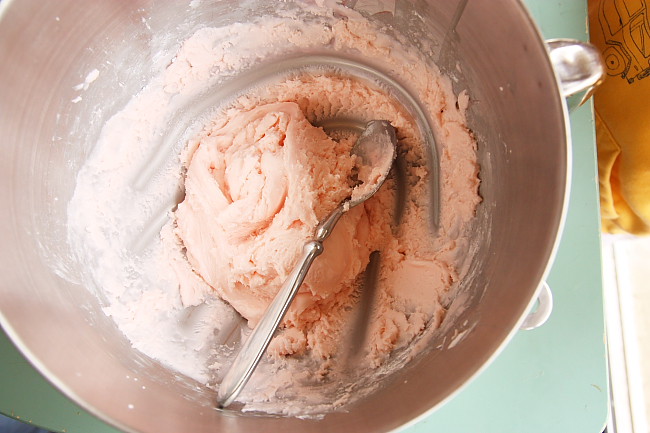 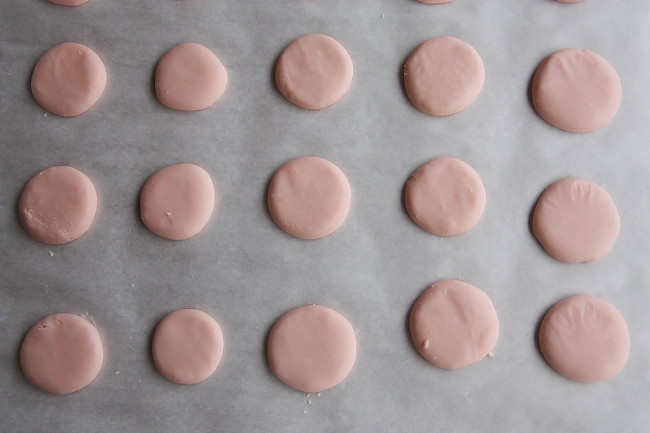 The directions said to let them dry for 2 hours, turning over after one.

After they dried for at least one hour I decided to cut a few hearts out, dipping my cookie cutter in powdered sugar… 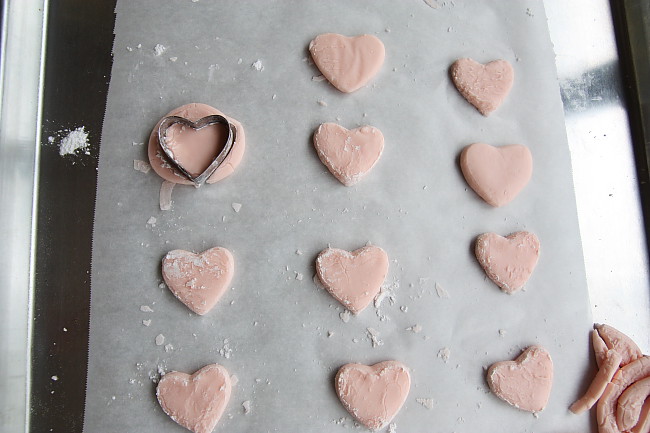 After they all dried according to the directions, they were supposed to be ready to “dip” in chocolate. Oh, they were so wrong. You see these patties are soft and pliable. Dipping them in warm chocolate made them lose their shape and the chocolate {even with extra shortening added} was still too thick… so I resorted to my favorite tool in the kitchen. {I also dusted off the excess powdered sugar before coating in chocolate.} If I had been a good baker, I would have read the 93 recipe reviews first, many that suggested freezing the patties to make the dipping part easier, using a candy mold, or using “melting” chocolate from the baking aisle opposed to semi-sweet chips…  reading all of that before hand would have been really helpful.

But since I didn’t read any of that before I started my mini offset spatula saved the day… and parchment paper saved the day too. I always use parchment even when it calls for wax paper, which it did, but some reviewers said “don’t use wax, they stick” so if you try it, go with parchment. 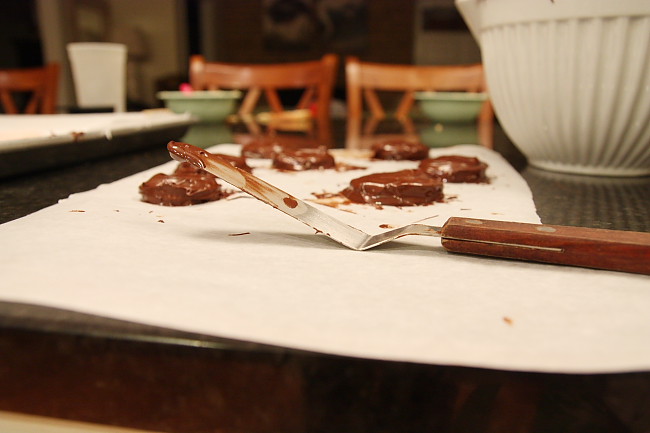 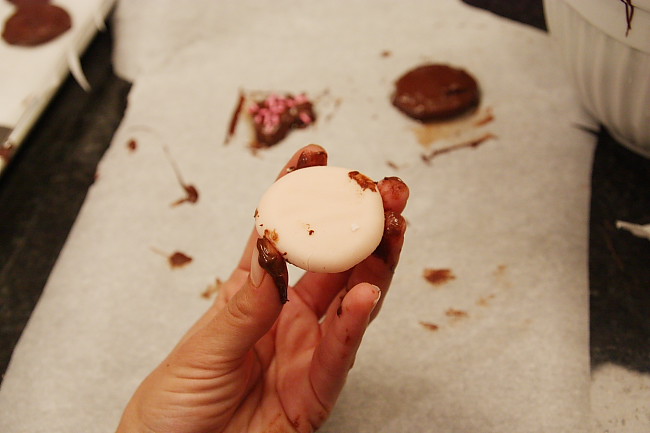 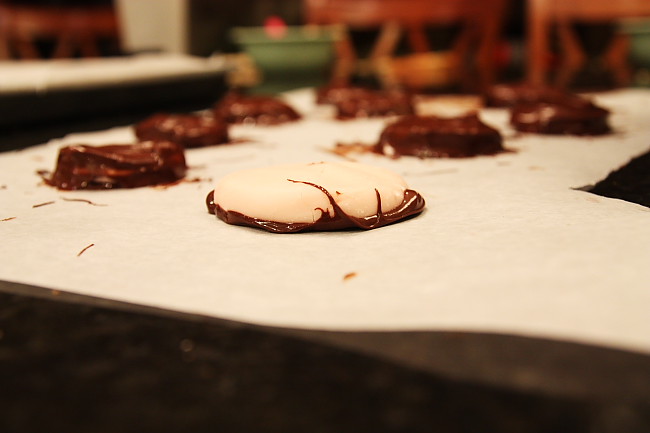 Then I’d doctor it up around the sides and top {so involved I forgot to take a pic}… definitely a little more time consuming than I had anticipated.  Then once they were all well coated I popped them in the fridge over night. They are great chilled or room temp! Involved? Yes. But, I will say this, they’re really good and even better than York Peppermint Patties! 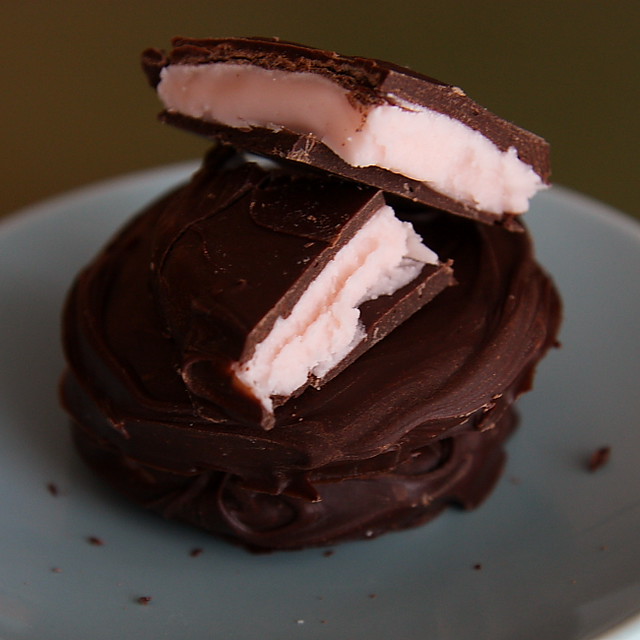 Next time, yes, next time because there will be a next time I will do one or more of the following…

The recipe source is here.

Now I’m going to go have one for breakfast.

Happy Friday folks and a big thank you for ordering tees, would one of y’all tell me to start ordering more! 🙂

Let’s Go for a Walk