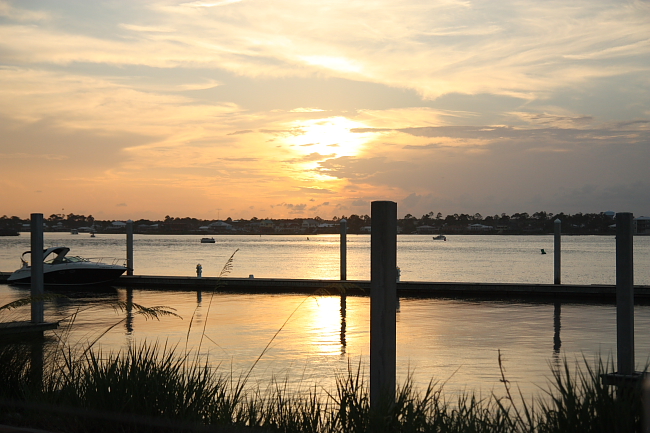 We are deep in the throws of summer and loving every minute of it; entertaining family, early morning swim lessons, long afternoon naps, home cooked dinners, evening boat cruises, trips to the library, afternoon sleepiness {me} tempered by iced coffee treats and a stack of books that keep my eyes and mind entertained and well-distracted from the internet world.

My parents drove in from Illinois this past weekend, and we had a great four days with them. Now they moved a little further east along the Gulf coast to spend some time with Erika and her family. We spent a lot of time on the water, exploring and taking in the sites. It was a rare treat to be with Daddy Boy on Father’s Day, and the kids loved having him around. His favorite game is Hide-N-Go-Seek, as long as he does the hiding and the screaming at top of his lungs when they find him, which is immediately followed by high-pitched squeals from the kids who are scared silly but can’t help but ask for more! 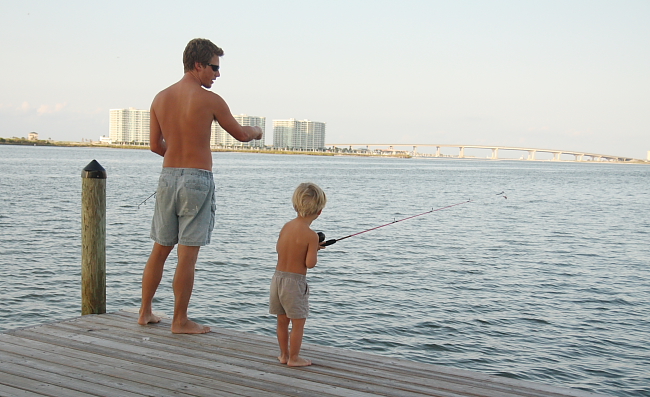 We spent most of the weekend on the boat. Part of the weekend we were parked with our toes in the sand, and the other half we put the boat to good use, exploring areas we had yet to explore. We are big into people-watching, and our  island parking spot proved to be the gold mine for people-watching on Saturday. It wasn’t long after we got settled in, next to a large family from Louisiana, that an enormous, chartered catamaran decided to park right beside them. I’ve been to enough Auburn/LSU games to know that you don’t mess with Cajuns, and this catamaran captain was messing with them by parking his ENORMOUS boat full of people right in front of them. A fight ensued before our eyes, and the eyes of all the people on the catamaran who had chartered it from their resort. The marine police were called in to settle the dispute. It was like being in the audience of Jerry Springer, in a lawn chair, on the shoreline. The Cajun is the exasperated one… did I even need to say that? 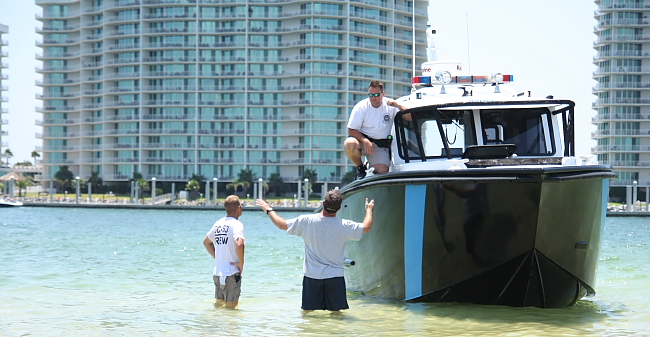 Rover and I even ventured out to the water because he was curious as to what type and how many motors the police boat had. Boys! 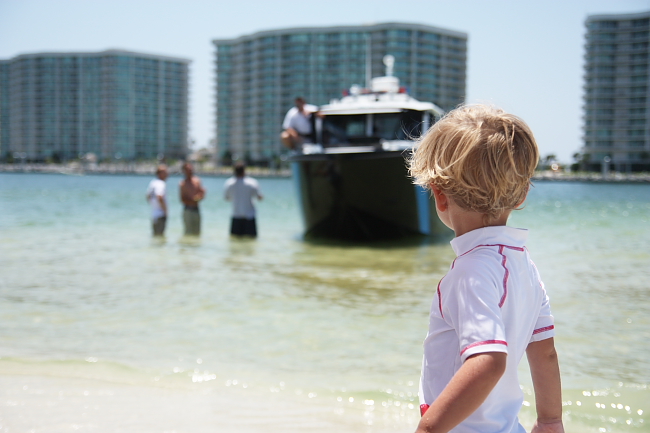 It wasn’t long when the dispute was settled and the police boat turned around to resume it’s patrol of potentially more life-threatening, water-related issues. The departure of the police boat, however, in itself became eventful when it’s twin 300 hp propellers became entangled in the enormous catamaran’s anchor line. It was as if the show just kept getting better.

After an hour or so on Robinson Island, at the suggestion of one of you kind folks, we headed east in Perdido Bay, to Florida waters, for lunch at Holiday Harbor Marina and had a FABULOUS lunch  {grouper, snapper and shrimp} at the Sunset Grill. Rover slept the whole way there, during lunch on the booth next to me, and didn’t wake until we got back on the boat. It was his most well-behaved meal since he was born!

We cruised some more, finding ourselves at Gulf Islands National Seashore {on Perdido Key, FL} for the afternoon. We returned home that evening and I made Honey Garlic Balsamic Chicken and served it with orzo pasta tossed in pesto and a salad! A great recipe worth bookmarking. Speaking of bookmarking, I’ve created a bookmark folder titled “Summer Recipes” and each one I try, that I like, I will be passing on to you. We are trying to think a little harder about the food choices that we make and I intend to share the ones I like along the way! This one was super easy and I used an all-natural, hormone-free chicken breasts. They cost a little more but Mom and I cut them into smaller pieces, 3 breasts fed 4 adults, 1 child, and 2 bird-like eaters {Paige and Rover}.

The girls had a blast playing with Daddy Boy’s glasses… and I couldn’t resist a few pictures. 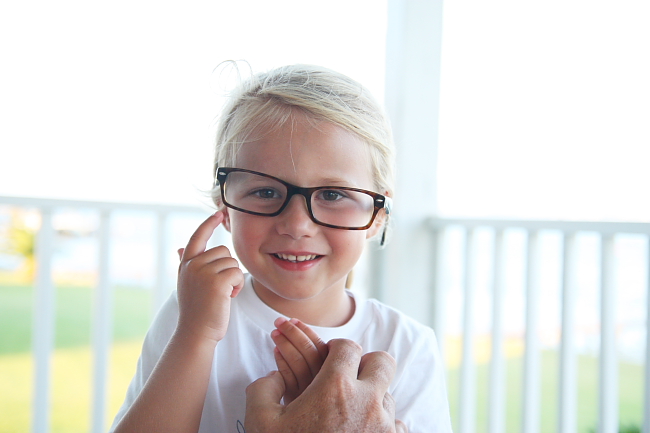 And as you can see, we have fallen head first into the stage of life that involves teeth falling out! 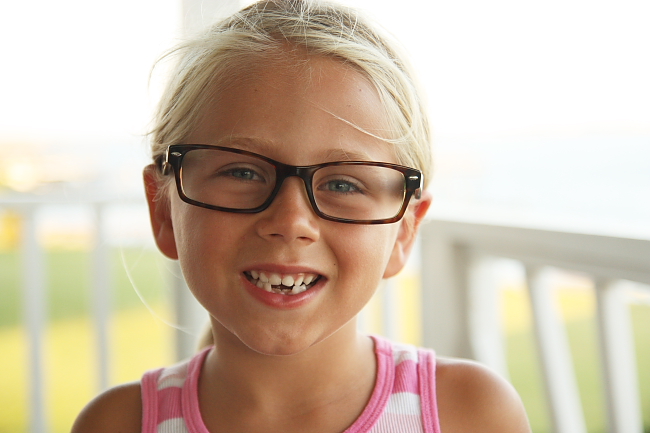 Paige doesn’t care much for all-natural chicken breasts in a honey garlic balsamic glaze. She’d prefer to swim in the bay all day, never brush her hair or pull it out of her face, and she’d like to live on chocolate ice cream for the rest of her days. 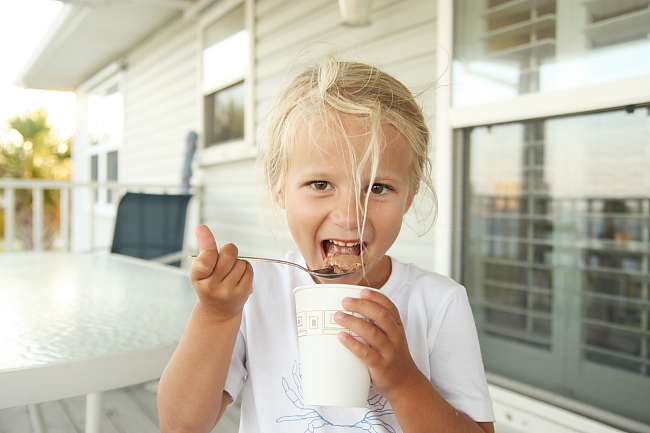 Same for Rover, but whatever you do, Daddy Boy, don’t help him. He’s 2 and can do EVERYTHING on his own. 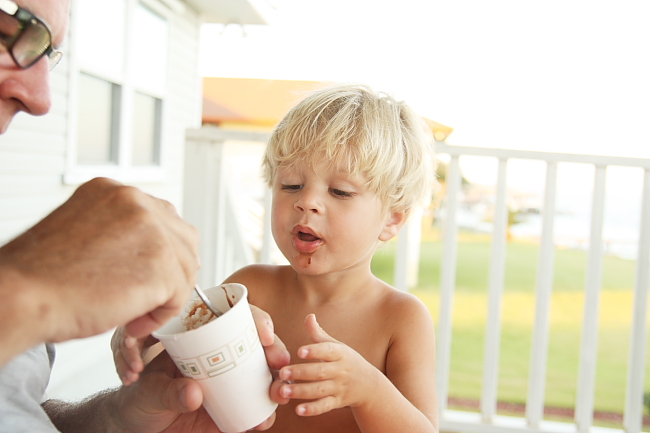 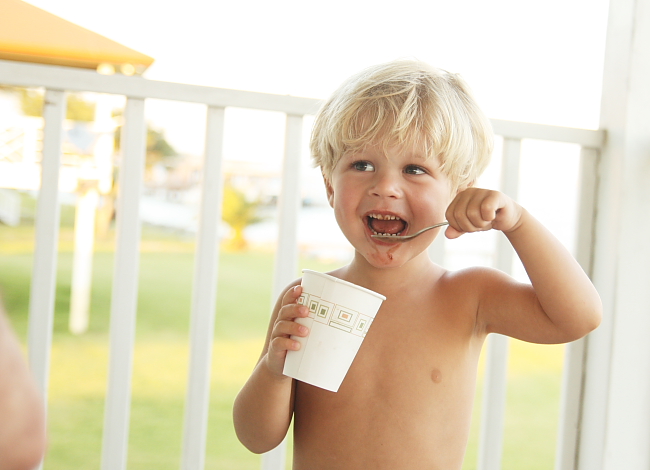 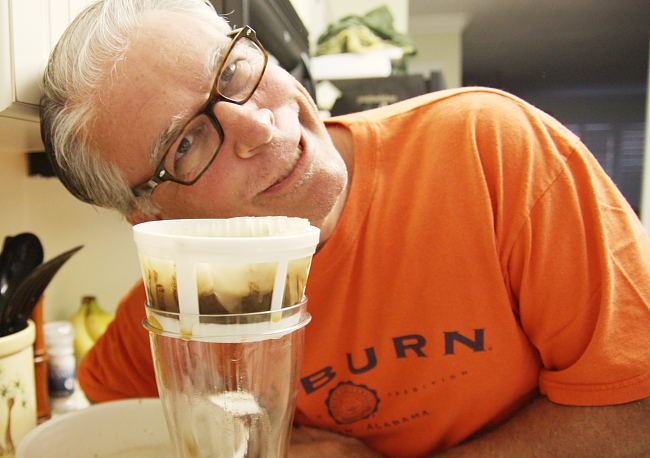 Speaking of Daddy Boy, it’s a good thing I don’t live at home, if I did the blog would be toast. People would say, “I read this one girl’s blog, and her dad is in all her pictures making totally absurd faces in the background.” My plan was to show you that I tried and loved PW’s iced coffee method and inform you not to waste your time and money on cheesecloth if you have a coffee maker that has a fine mesh filter basket…. but, Daddy Boy walked into the kitchen and was all, “Oooh what’s going on!?” and then decided he would be funny and get in every picture that I tried to take. I wasn’t even going to mention him in the background, just talk about the coffee and pretend like the nincompoop wasn’t in every picture. But seriously, how could I not mention him? 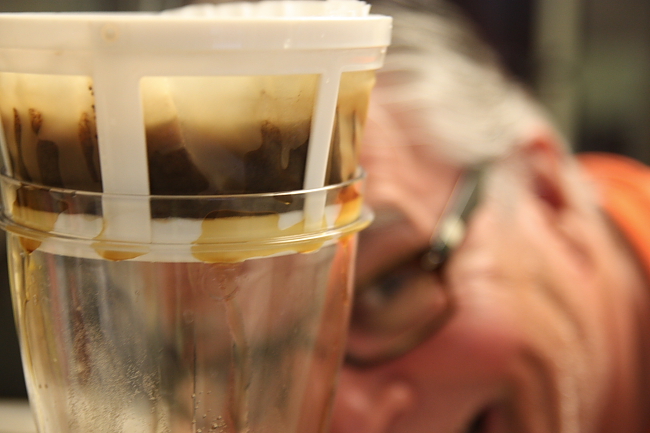 I’d get down low and try to get a close up, doing my best to crop him out… all to no avail. He’s persistent and completely pesky. So, here he is acting like a complete squirrel. 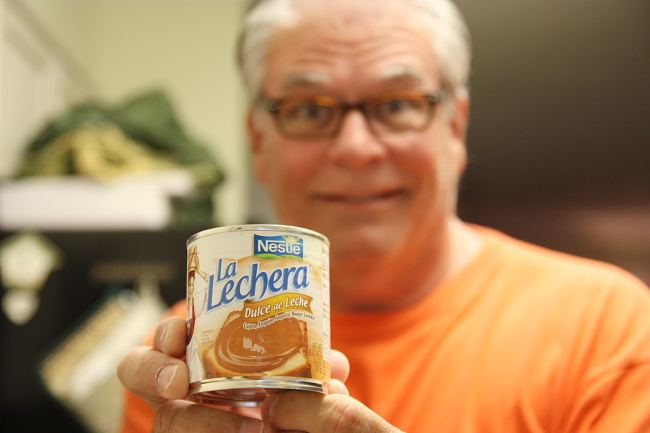 Then I was going to tell you that in her Vietnamese Iced Coffee she recommends using sweetened condensed milk but I opted for Dulce de Leche and all I can say is mmmmmmm! It’s thicker than condensed milk so I put a couple tablespoons of it in the blender with my milk and blended really well until the milk is frothy and the dulce de leche is incorporated. Pour your frothy, caramel-y milk over your chilled coffee on ice and you are set! Have one every afternoon and think of Daddy Boy who won’t drink coffee hot, nor cold, but has no problem being photographed with it. Did I say I was thinking harder about our food choices? This doesn’t count, ok.

And here’s Daddy Boy again after he had his tranquilizer. 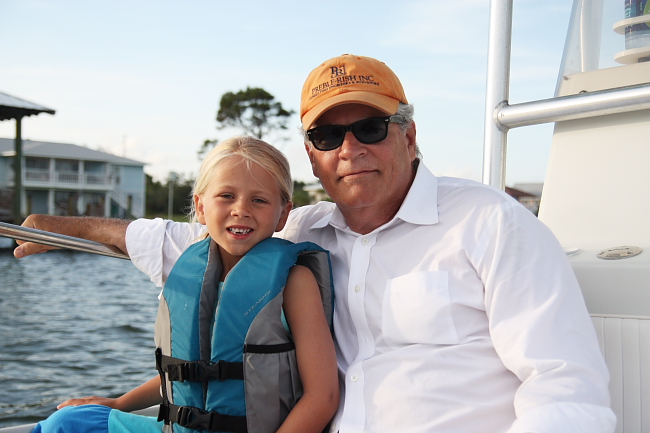 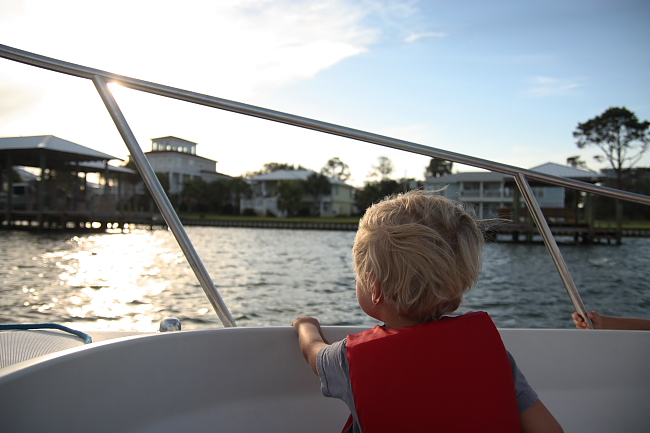 This time we headed to Cobalt.With kids. 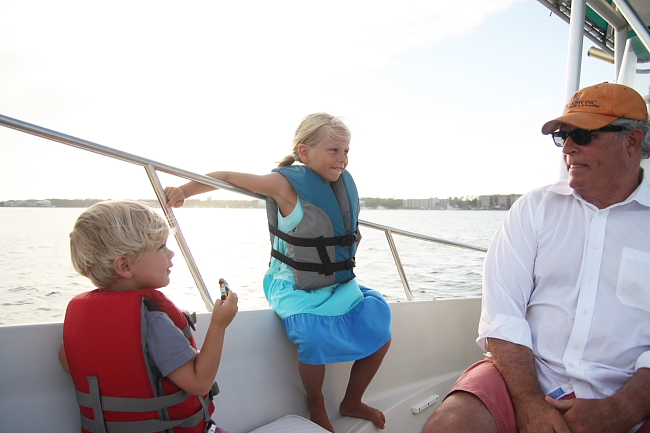 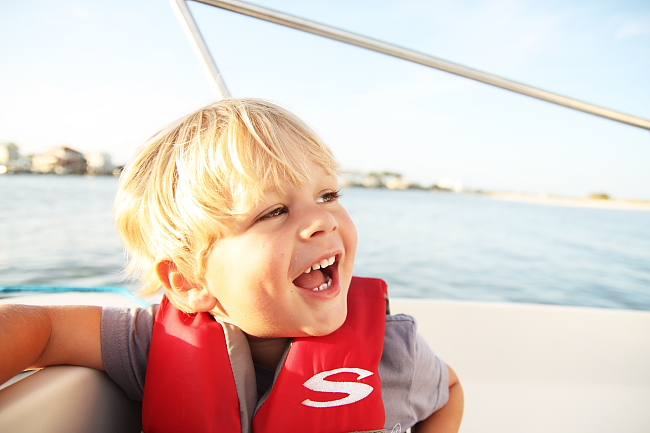 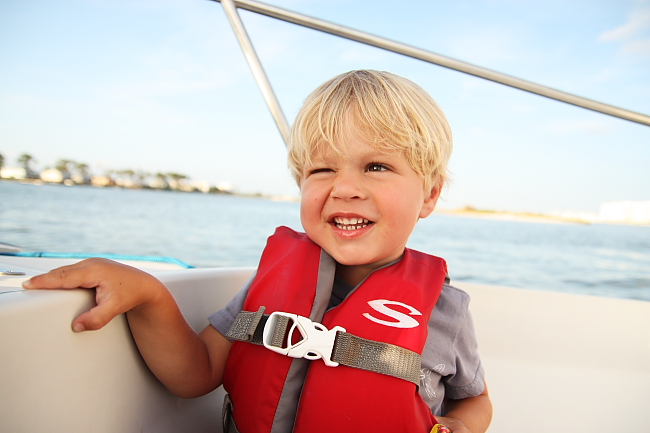 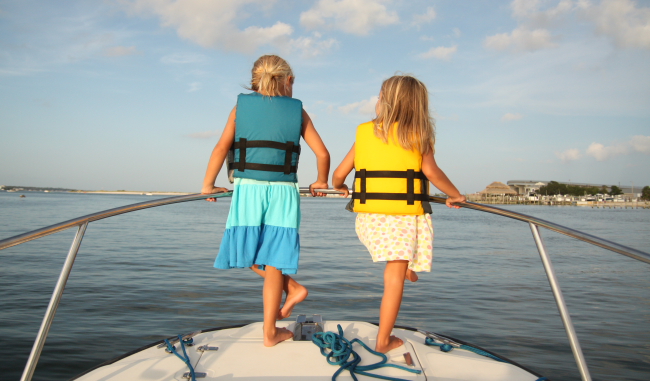 We pulled right up, found a little slip to park in and dined outside, bay side. 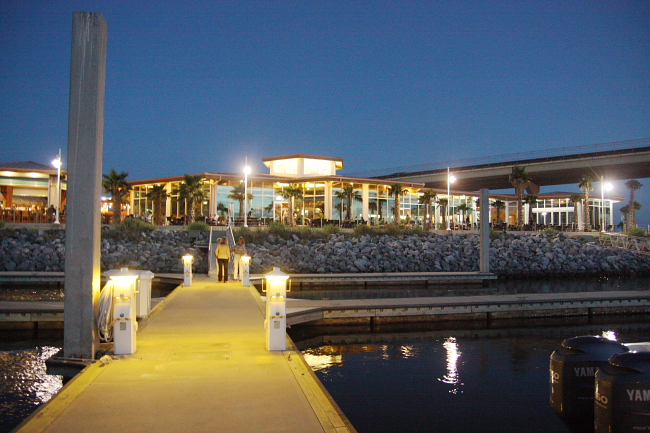 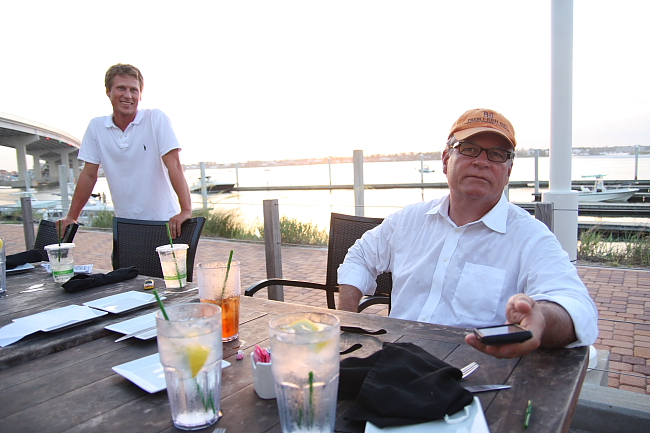 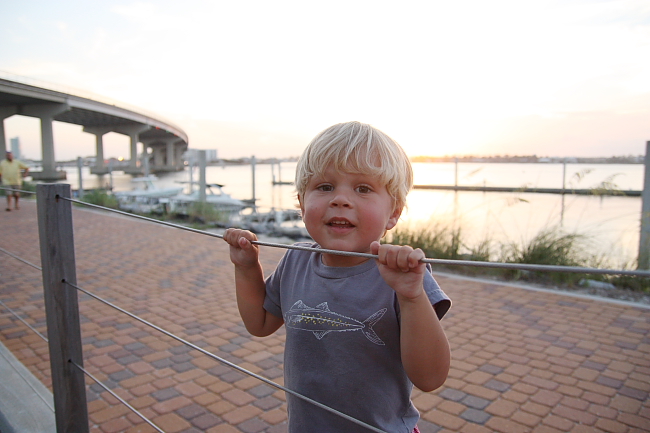 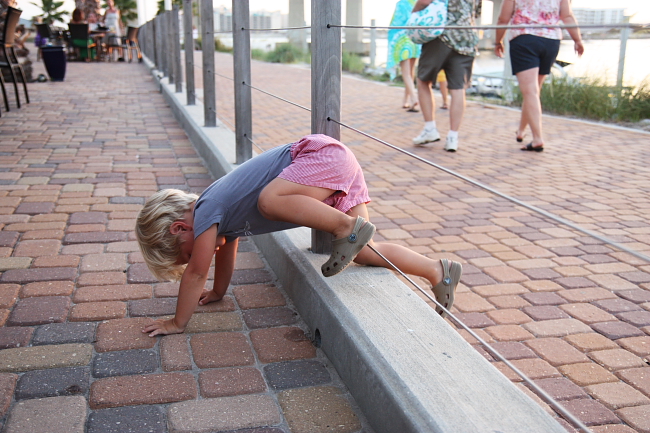 The sun set while we ate and the food was delicious; we had crab claws, shrimp, Wahoo, and pizza for the kids. 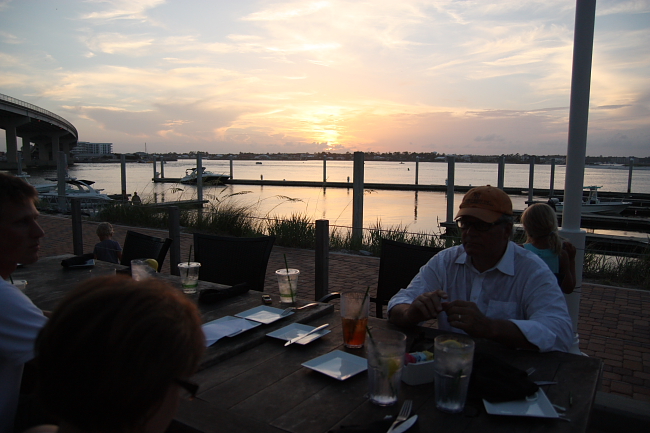 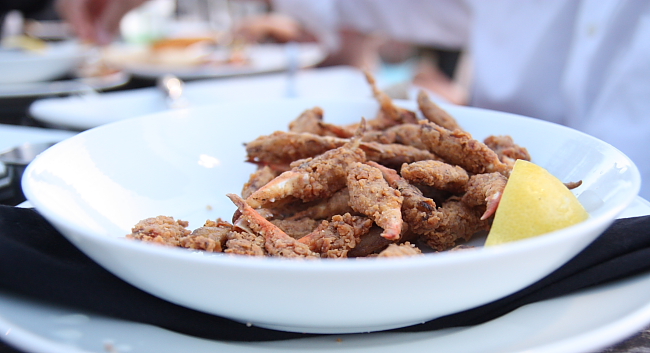 Then we loaded back into our chariot that awaited us and floated home, only running aground three times because our early 90s boat depth finder doesn’t work. The kids cried and thought we’d have to swim home. Justin jumped out in ankle-deep water and pushed us to safer/deeper water. 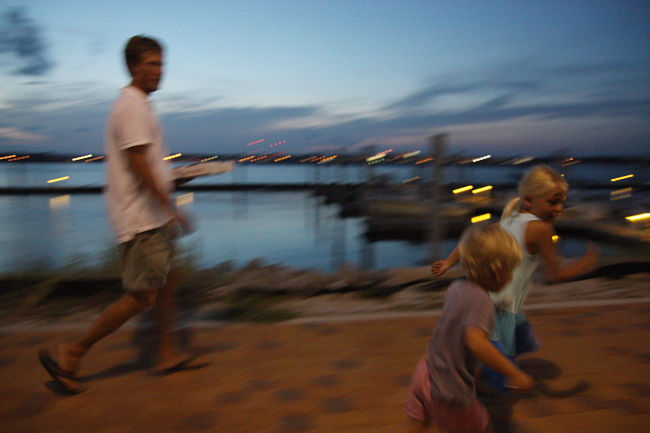 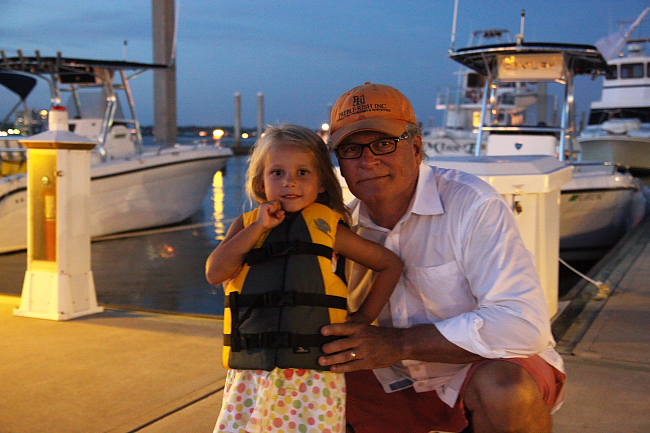 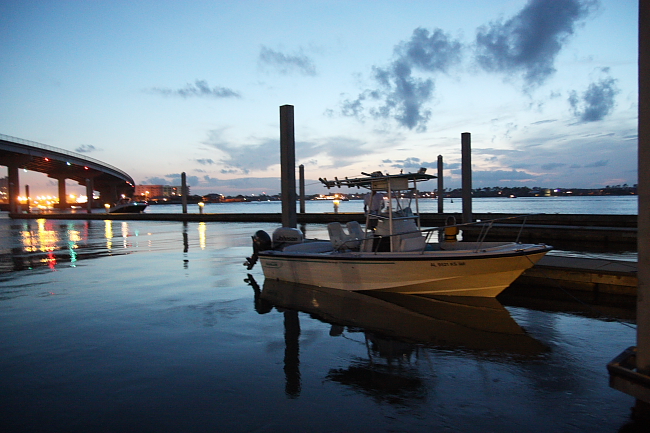 I love this one of mom and Raiger. We call Paige “Little Connie” because she acts and looks like my mom! It’s always fun to see them together! 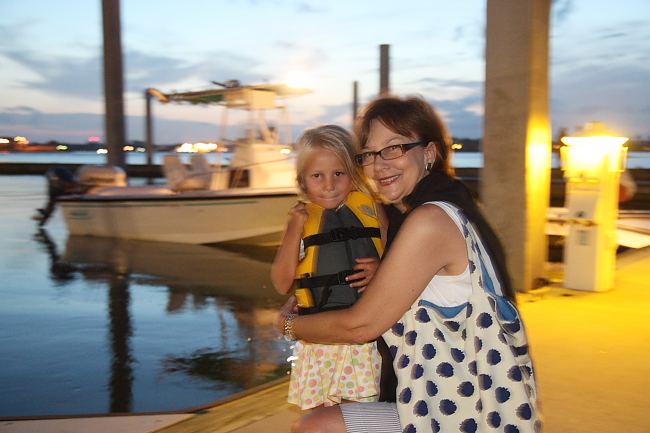 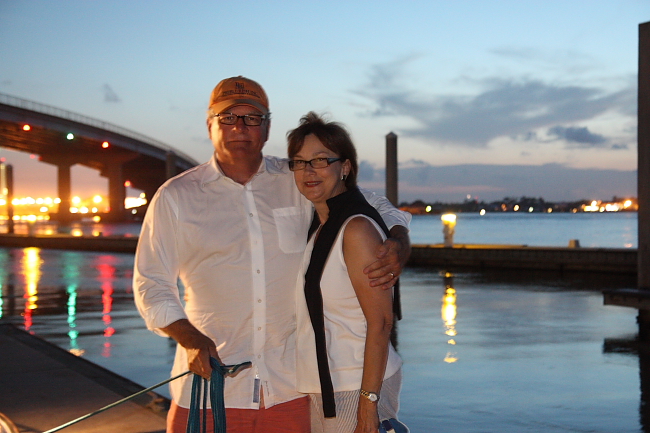 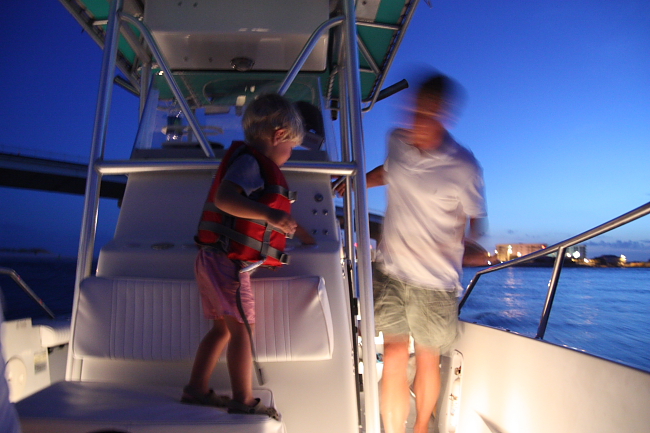 Thanks for making the long journey Mom and Daddy Boy, we loved spending time with y’all. Hopefully you are recovering  from early morning wake up calls from Rover, who says, “Wake up! Wake up!” even at 6 am.