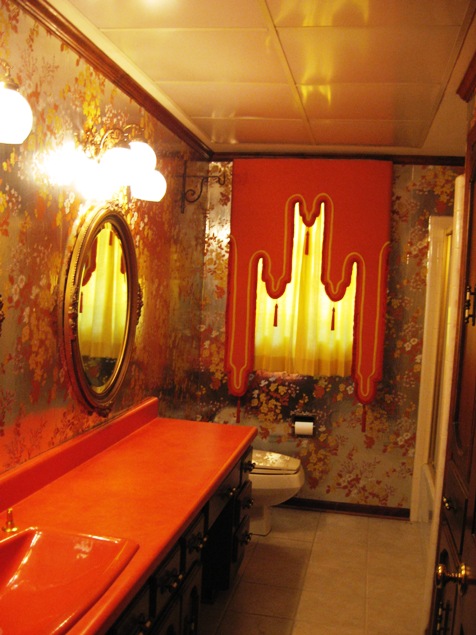 … none of your bathrooms look like this.
As I mentioned in my last post we were on a serious budget constraint for these bathrooms {as we were for the rest of our house renovation too} that is why for the last 18 months it hasn’t looked too much different than it does in the above photo. The phallic curtains {I’m sorry, I know that’s inappropriate but every time we looked at them we would get the giggles} were the first to go and the rest has been sitting there, the square toilet and all.
I knew I had to be creative with this one. This is a full bathoom that our children share. There was no granite/marble allowance. There was no floor allowance. No sink allowance. Being on a really tight budget forced me to be creative with how this one was done. One thing that the Lord continues to work on with me and my heart is being content. I tend to think… “if I just had money to finish this or that” or “if I just could get ____ then I would be content”. As those thoughts crept and will continue to creep into my mind the Lord gently reminds me that this world is not my home. A bathroom filled with marble, chrome, and the finest of fixtures will not bring me contentment. Because then I would move right along to the next thing that I would think that I needed to make me content. My mind battles it over and over again. With that said, I can honestly say {for the moment 🙂 } that I am content with being on a REALLY tight budget because it has forced me to think outside of the box, to be creative and to use what I have. {And… I have to give Mom credit for her very talented skills at being creative and thrifty… because she came along side me on this one.}
So the orange stayed.
The floors stayed.
The sink stayed.
The tub & tile stayed.
The cabinets stayed.
The curtains, light fixtures, mirrors, wallpaper, and faucet… WENT.

My sister-in-law will frequently call us if she’s getting rid of stuff. Several months ago she called and had a huge pile for Goodwill and asked if I had any desire to come scour it before she sent it off. I found this… 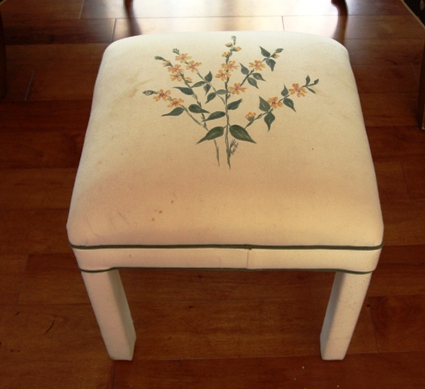 Not too cute. But I remembered that I had this fabric. Hancock’s used to carry a really nice line by Laurie Smith but discontinued it and I found it all on the clearance rack for $3/yd. I bought all that I could find. We had just closed on our house and the orange bathroom, as we call it, came to mind! 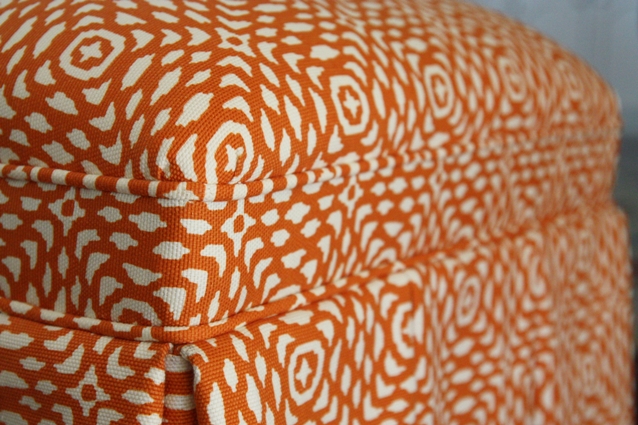 I had the seat recovered in the orange fabric because I knew it would tuck perfectly in the vanity nook in the girls bathroom. The upholostery fee was $65. 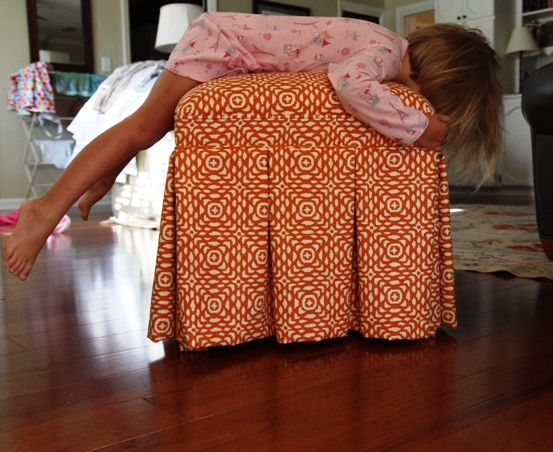 Back to the bathroom…
Last spring, as in 2008, {when Mom was here} we started to peel the wallpaper. We never finished. Justin ended up tackling it and from there we didn’t know what to do. So it sat there with bare and damaged walls for 1 year. The foil paper was a real booger to get off and it ended up taking some of the drywall off with it. The walls really needed to be skim coated with drywall compound before we primed and painted and so it just sat and sat and sat. That is, until I found Carl… 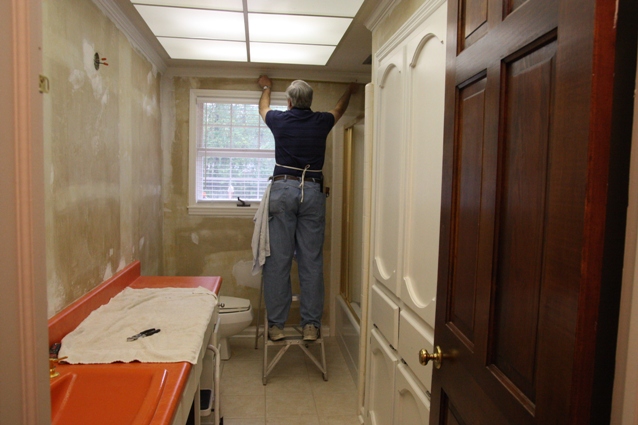 He hangs wallpaper for very reasonable prices. He also is very “grandfatherly” and patient with 2 children who thought it was their job to help him. Anyway, we ended up applying wallpaper to the walls. I bought a paintable vinyl grasscloth at Lowe’s and rather than hang it vertically we asked the pro to hang it horizontally. He happily obliged. He charged $125 to paper the whole bathroom. And within a few hours it was done. I already had the paint and Mom went to town painting it. {Adams Gold by Benjamin Moore} 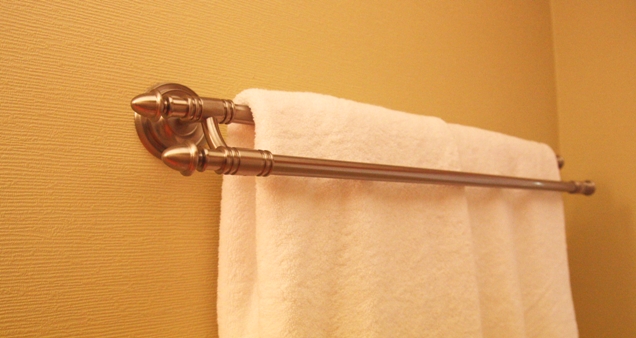 I bought all the hardware at Walmart with the exception of the double towel bar {because I knew we’d need it}. It came from Lowe’s. 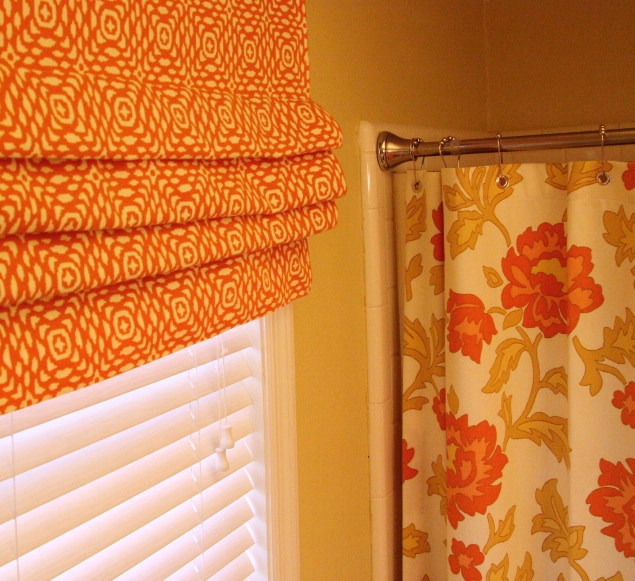 I made a “fixed” Roman shade for over the window. The blinds also came from Walmart. The fabric on the shower curtain was also in the Laurie Smith collection and was also on the clearance rack. I had a seamstress make the shower curtain. It’s been 18 months since then so I can’t recall what she charged… but I really don’t think it was more than $25. 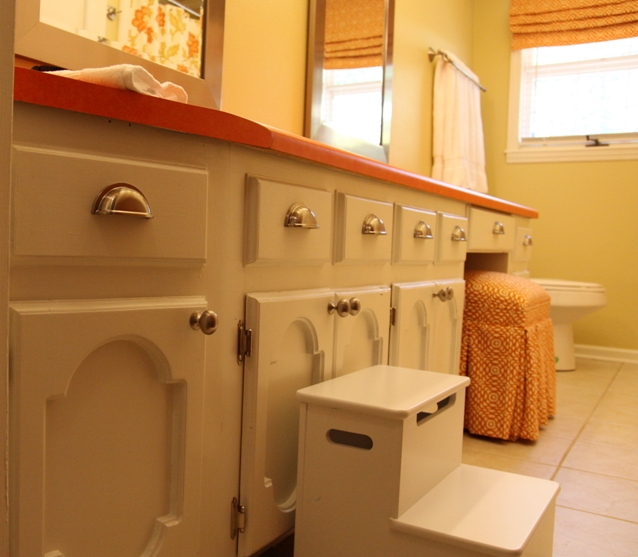 We painted the cabinets white {White Dove by Benjamin Moore} and if you look close you’ll see my knobs don’t all match. I was ok with that because I had them stashed in a big box from previous home renovations and knew if I went out to buy new ones that all matched I would be forking out more money. The mirrors, toilet, faucet & light fixtures came from Lowe’s. 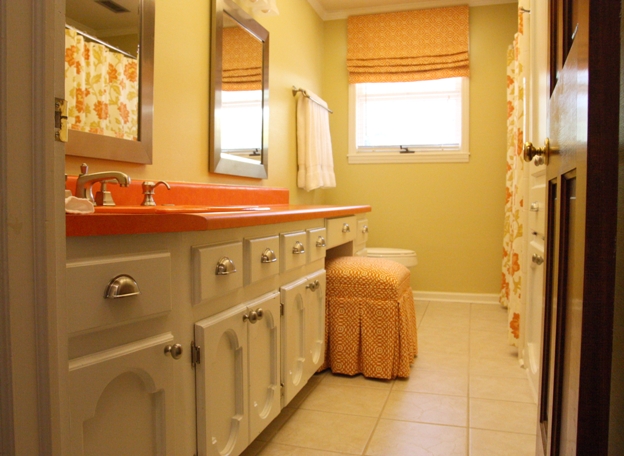 The recessed tray ceiling is still there. I put new bulbs in it for now and cleaned the plexiglass covers. Eventually we want to drywall the ceiling to cover it’s ugliness but for now we’re fine with it. I’m just glad it’s looking better… orange you?
It looks like the total renovation for this bathroom came closer to $500 on it’s own. In my previous post I said we did both bathrooms for $500… but that was before I did ALL the math. But this one was much more expensive than the next. So stay tuned…
April 26, 2009
Share Tweet Pin it +1

Two Gardeners & A Tin Can

I SHOULD be packing!