My dad sells things on Ebay. Usually in his “product description” he’ll use words like “noteworthy telephone” but he’ll have no reserve and sell it for $2. It always cracks me up that he would deem it noteworthy. He also found a handful of his old RayBans from the 80’s and sold them all on Ebay. His “product descriptions” would read…
Awesome pair of 1986 RayBan wayfarers. Guaranteed to make you look 94% better.

And people would buy them.

So in honor of Father’s Day weekend I’m deeming our weekend “noteworthy”.

The Eufabs is doing better. Thanks for all your well wishes for her. I nearly fainted Sunday morning when I walked out to this scene… less than 48 hours post-op. 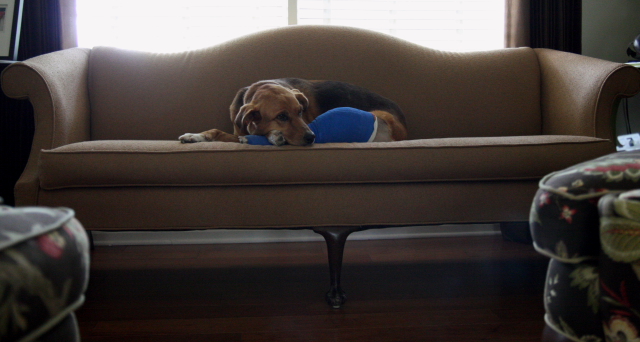 We were given strict orders for her not to run or jump. I’m not sure how she was able to pull this off. But what can I expect from a dog who can catch deer. Seriously, she has caught a deer. She and Justin were at the farm this past winter and she caught a fawn. She just wanted to scare it and show it who was boss and then she let it free to join it’s mother.

In other happenings, I’ve been working on John Martin’s nursery. He’ll be one in a week and I figured it’s time to wrap things up. It’s a good thing I’ve waited this long, it’s given me a chance to get to know him and set up his nursery to suit his needs, more specifically his diaper changing needs. He absolutely DESPISES diaper changes. He literally rolls over, kicks, screams, cries; you name it he does it. I’ve tried everything… opera singing, screaming back, silly dancing, I’ve even attempted to nurse him while I changed his diaper… I was desperate. These are the only things that have brought any relief to the diaper changing sessions. Halleluiah! 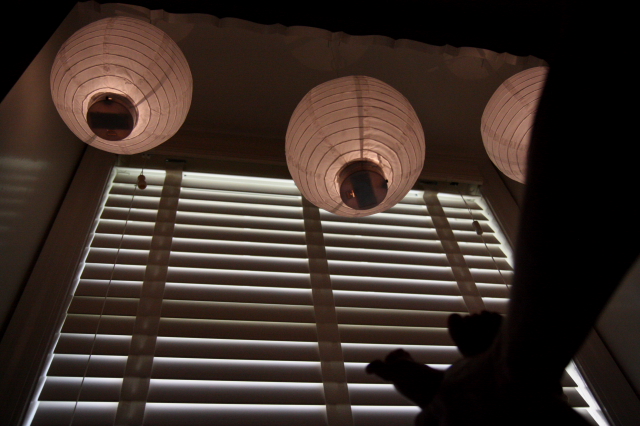 My kind family allowed me to snap a few pictures Father’s Day morning as we were walking out the door to church. Morgan loves accessories, she did not inherit this from me. Isn’t Paige hilarious? Just all smiles over there, as if nothing else in the world is going on. 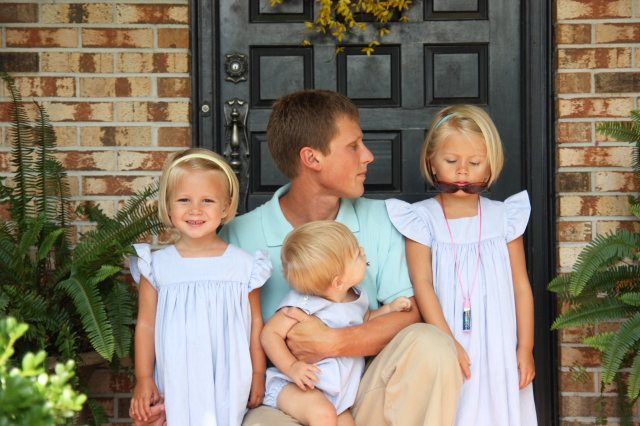 After great coercion we got her to take the sunglasses off for 2 seconds. 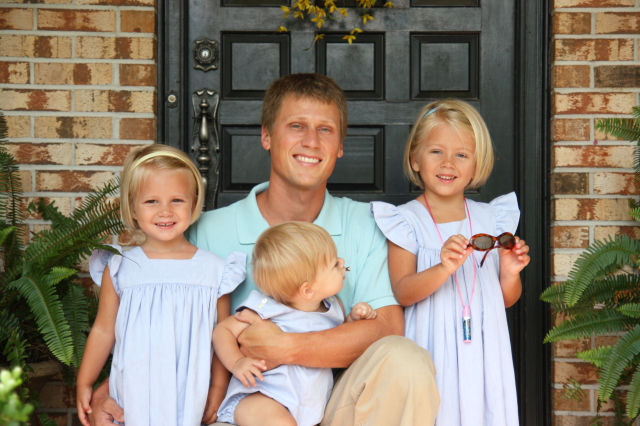 John Martin was looking at me in a couple of the pictures, but of course no one else was… so this is as good as it gets.

Sunday evening, cousin Ava had us all over to celebrate Father’s Day {and my belated birthday} with swimming and food! 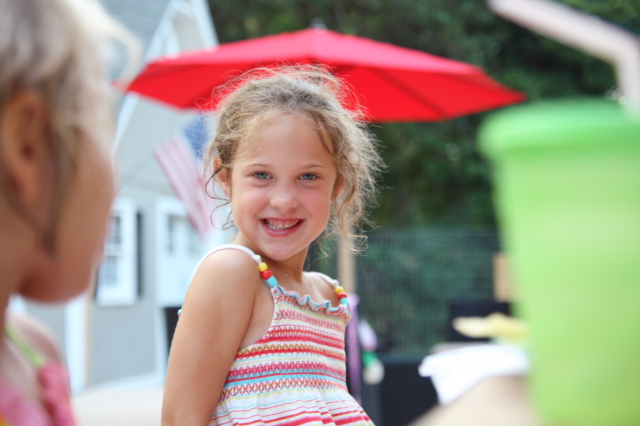 We had the most wonderful time, especially the little man. 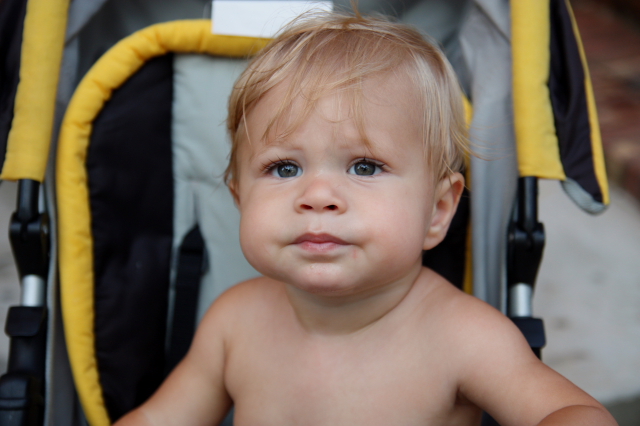 He’s always delighted to be in the company of cousins. Let me go ahead and confess that rarely can I stand to keep my lips off of him! I hear boys do that to their Mommas.

Today Morgan helped me prepare for our small group. Cleaning up is her specialty… 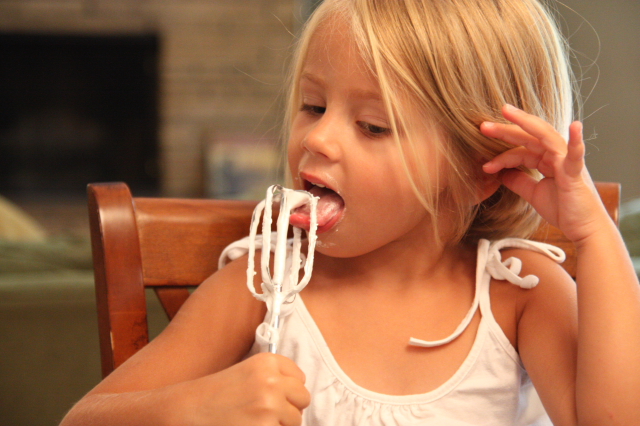 We made strawberry cupcakes with Betty Crocker’s Home Style Fluffy White frosting {the powdered kind in a box not the can}. My mom has to buy the Fluffy White frosting boxes up north and mail them to me. I’ve yet to find it down here. Have you ever used it? It’s the BEST; a fluffy, sticky, marshmallowy, meringuey frosting that is basically a 7-minute foolproof frosting in a box. The 7-minute frostings I’ve tried have always seperated and the sugar gets gritty. Not so with this. It’s 7-minute frosting perfection and good on just about anything. And… it’s shiny & pretty too! 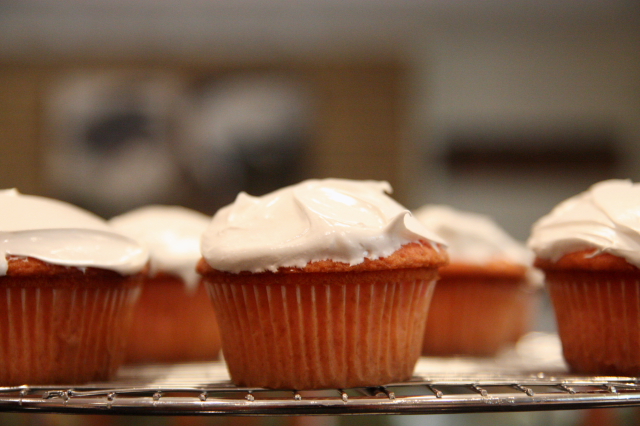 While Morgan and I “cleaned up” John Martin was busy playing Cowboys & Indians in his high chair. 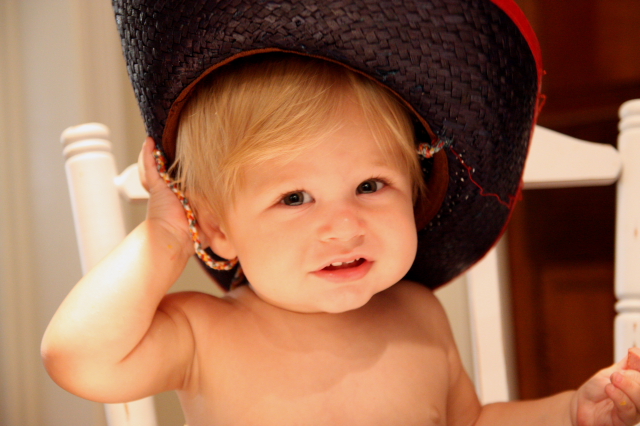 And then he needed a cleaning of his own. When he was done with his bath Justin brought him out like this. 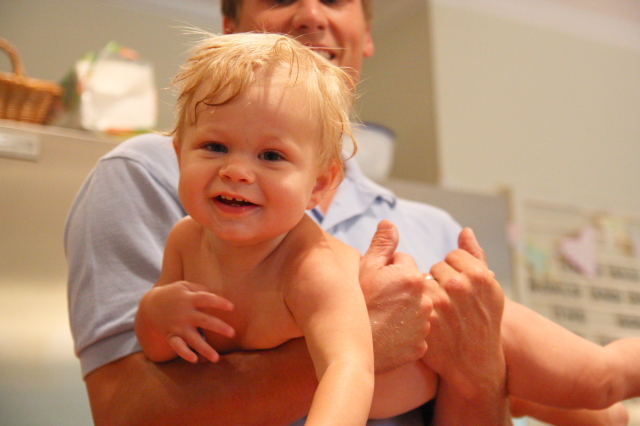 I can only imagine he revolted when it came time to get his diaper on so Justin said “heck with it”.

Hope you also had a noteworthy weekend!

I should do more arm-twisting