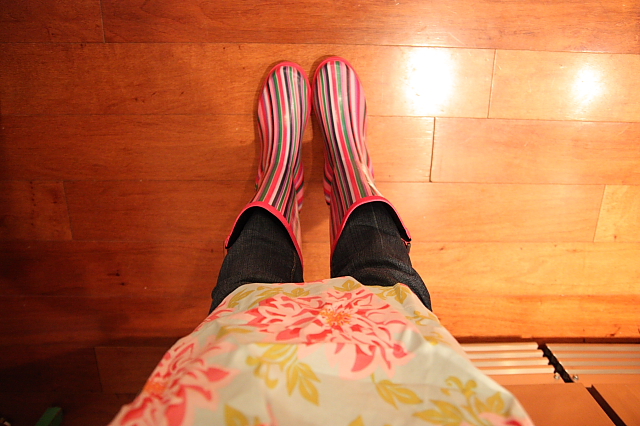 Hello people. I have so much to share. So much so that some times I wish I could just open my brain and dump it all out with “auto fill”. Good thing such “process” doesn’t really exsist, you’d get way more than you bargained for.

Before I start, I want to share a self-portrait. 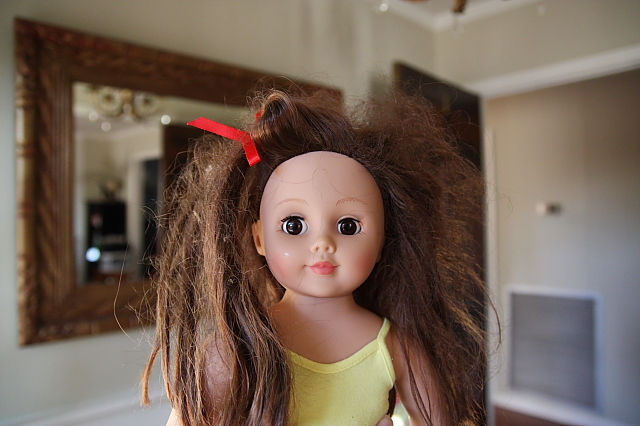 The first thing Morgan told me this morning was that she has a doll that looks just like me. When I inquired as to which one, she returned with what I now refer to as Darby Doll. 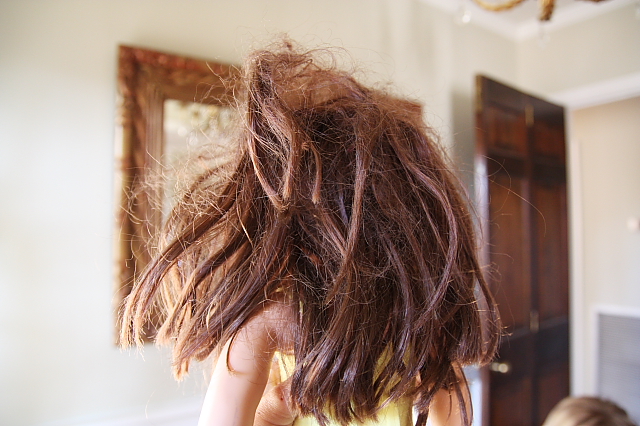 “And Mommy,” she said, “her hair even looks just like yours too!”

She couldn’t figure out what was so funny, she was serious.

As I mentioned the beginning of this month, I am resolved to work on some things this year. I’ve tried to be diligent in accomplishing what I set to do. Unfortunately taming my mane didn’t make my list… I’ll be sure to add it later. Apparently I need some V05 and a flat iron— or maybe just extra conditioner and a hair brush.

Ok, so the resolutions…

One was to be better at keeping the house. It sounds easy, doesn’t it? For me it’s not easy. A few weeks ago I purged my closet and this past Saturday I tackled the kitchen cabinets. It was a great relief to de-clutter and reorganize, but the hard part will be keeping them organized. 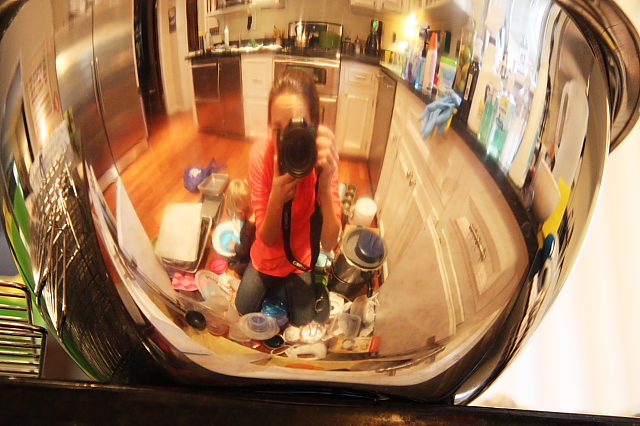 I literally pulled every single thing out, purged, organized, and then put most {but not all} of it back in. I, of course, couldn’t have done it without Rover’s help.

Another one of my resolutions was to read at least one book a month. That sounds easy too… but for me it’s not.  I tend to start 4 books at a time, get lost in one, then lost in the other, yet not quite finishing the first, second, third or fourth, so before I know it I am “reading” 4 books that I’m not really “reading”… sounds similar to my “organizing” routine. Do you call this ADD? Or ADHD? Or motherhood?

So, anyway… I’ve been reading…. Primal by Mark Batterson and I’m only 1/2 way through but it’s an easy read and I feel confident that I can wrap it up in the next few days, or if I drink enough Diet Coke, maybe tonight. I know nothing of Batterson, his church, or his theology, which is at first why I had slight hesitation. I thought to myself, maybe I better get online and see what he’s all about, see what the book is all about, see if it lines up with what I believe, etc, etc, etc.— I blame/credit my Presbyterianism for such thought processes. Anyway, long story short I didn’t “investigate” him first, I had read 2 really good reviews {thanks, Jennifer} and decided that from what I heard that I’d give it a shot. Well, it’s been extremely encouraging. It’s elementary, refreshing, and, like it’s title suggests, it’s PRIMAL. Batterson says Christians tend to “complicate” Christianity but Jesus Christ simplified it through the Great Commandment: Love the Lord with all your heart, with all your soul, and with all your mind. I will add, and I don’t remember him saying it in the book, that I don’t believe I can do any of those apart from  the righteousness of Christ that has been credited to me through his atoning sacrifice. {there I go again— I promise, I can’t help it}. Anyway, I wanted to share a few excerpts from his book that I thought were very profound, interesting,  honest & encouraging:

… it’s much easier to act like a Christian than it is to react like one. Anyone can put on an act. But your reactions reveal what is really in your heart.

And when people think analytically, it can hinder their ability to act compassionately. The head gets in the way of the heart.

{I don’t think Batterson is suggesting that believers leave their brains at the door but I do believe his assessment is true. We hit analysis paralysis when someone comes to us in need or when we see someone in need– I know I do, instead of helping I try to figure out why they’re in the position they’re in or what’s the best way I can help and then I get stuck, resulting in no action.}

Leonardo da Vinci himself once observed that the average person “looks without seeing, listens without hearing, touches without feeling, eats without tasting, inhales without awareness of odor or fragrance, and talks without thinking”

Is it possible that we’ve studied the God of logic without truly worshiping the God of wonders?

You never know where or when or how God will invade your life, but He can show up anywhere, anytime and any way. And that ought to fill us with holy anticipation.

I’m afraid we’ve unintentionally fostered a subtle form of spiritual codependency in our churches. It is easy to let others take responsibility for what should be our responsibility. So we let our pastors study the Bible for us. Here’s a news flash: the Bible was unchained from the pulpit nearly five hundred years ago during an era of history called the Middle Ages.

{Again, I don’t think Batterson is saying not to not dissect Scripture, I think he’s making a point that dissecting it without letting it dissect us, results in just dissecting Scripture– or Bible knowledge {keep reading}.}

God doesn’t just want to speak to you through Scripture; He wants to speak THROUGH YOU. He wants to write His-story through your life. And Scripture is the script. Read it. Meditate on it. Then live it out.

It is absolutely chocked full. The only thing so far that I wish he had done differently was the references & Bible translation… I find myself flipping back and forth nearly every paragraph to check his sources and references– which thankfully he has a lot of. He also uses the Message translation for some of his references, which I’m sure has some great benefits and I’m probably outing my hyper-criticalness when I say that I’ve always referred to it as the kinda sorta version… or the KSV! 🙂 {that’s for my CBS group} Thank goodness, Jesus Christ can call people to himself regardless of translation… I’m a living example of what Batterson is trying to show— I think I need some dissecting!

I hesitate, slightly, to even share before finishing the book but the first half was so full that I imagine I’ll be back again when I’m finished. I also want to say that it would be foolish for me to assume that all of you are believers. Or that you even agree with what I’ve found to be encouraging. I’d love to have any feedback or thoughts on this from believers or nonbelievers, but I do ask that if you are interested in entertaining conversation that you will do so with the utmost respect.

And the third resolution… that I would be obedient to and not ignore the Spirit of God. Now that’s a major resolution and one that I honestly believe is as much a presence of mind as it is a “thing” to do so I’m not even sure I’ll ever come here with an earth shattering example but as I looked back through Genesis this week {which is what we’re studying in CBS this year} I was encouraged by the many different examples of people living by and trusting the Spirit of God. As inspired and encouraged as I am by the people of Genesis I’m equally or even more encouraged by the faithfulness of God to them… because they were all sinners. Not one was perfect and almost every one planned to take their matters into their own hands. Yet inspite of themselves, God was still faithful to guide each of them.  Just as He is to us today.

And last but not least… this has nothing to do with resolutions. But I often wonder what Justin and I used to do before we had children. I think we were probably more sane and this will likely prove it. So, Sunday night we were he was watching the Vikings/Saints game and of course Brett Favre came up in conversation and how he can still keep it all together at 40 years old. Then we laughed because Justin will be 32 next month but looks every bit of 22 and I told him that he’ll be like Brett Favre when he’s 40 and then we started laughing about how we compared him to Brett Favre and started brainstorming about what mad skills he has and we came up with this one. 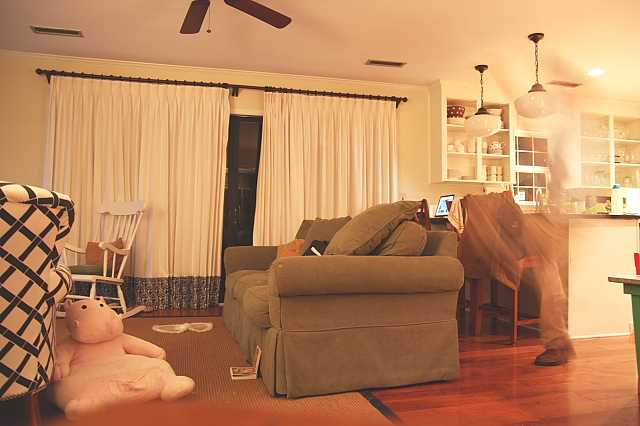 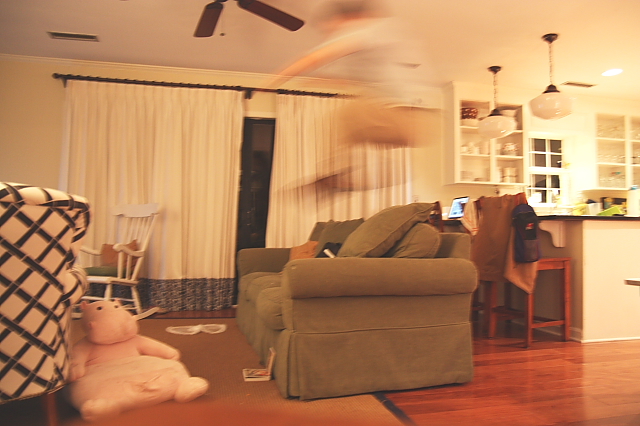 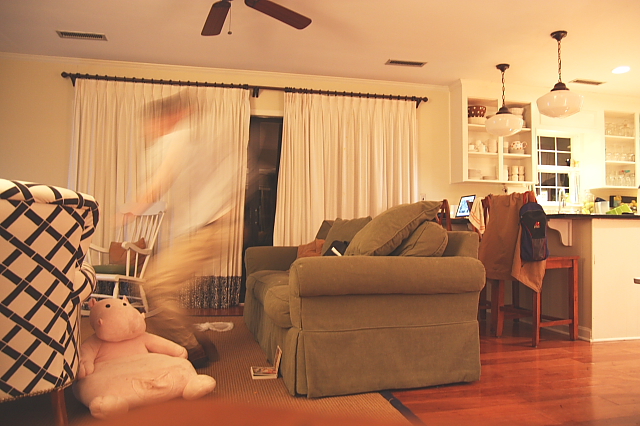 You must look closely or you’ll miss him. He’s so incredibly stealth-like. I was certain he was going to kill himself in the process and we’d end up in the ER with a broken ankle, wrist or tail bone… but because he’s like Favre nothing knocks him down.

We laughed really hard, uncontrolably. I thought I was going to have an asthma attack. And then we woke the children {Raiger sleeps in her clothes and even wears them the next day— she’s so easy like that!}. We refrained from getting Rover up, because Rover would think he needed to do this… ignorance is bliss. 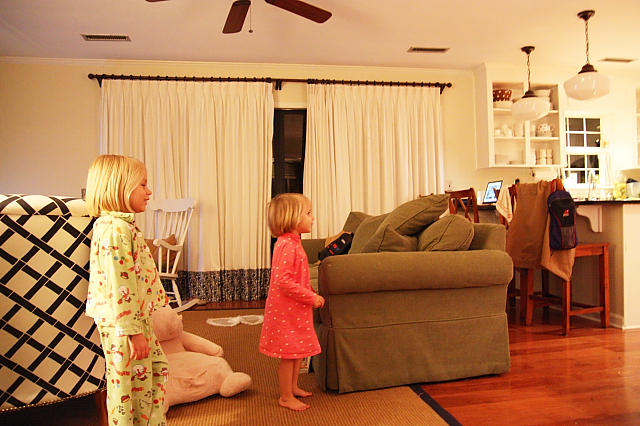 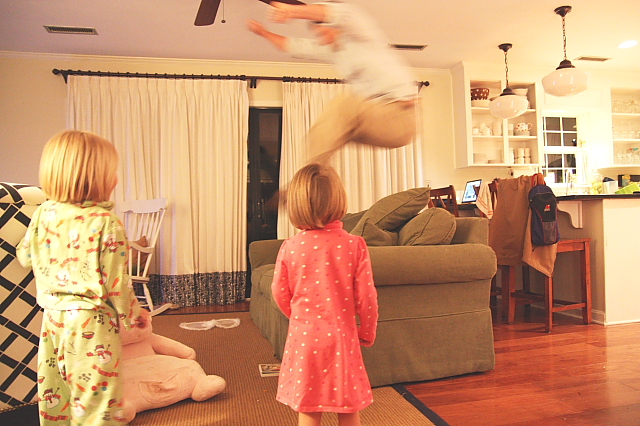 “Ok, girls. Now go get back in bed while Mommy takes pictures of Daddy jumping over the sofa!” They must think we’re either way fun or totally nuts!

Update on other things: My grandfather had his first round of chemo today and didn’t tolerate it well. He wound up being transferred by ambulance to the hospital and only received a little over half of the first dose. He’s scheduled to have his port put in tomorrow… I am so grateful for your continued prayers for him!!

I’m listing my things on Craft Hope {not my etsy shop} I’ll let you know as soon as they have them listed.

My friend,  Christina’s baby boy Austin continues to thrive and surprise the doctors! He was born at 26 weeks weighing 1lb 9oz. 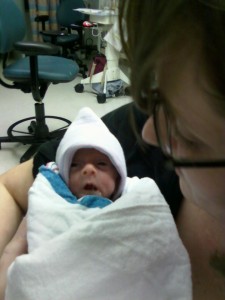 All our bags are packed…