Thanks for all your positive feed back on Batterson’s book. I can’t wait to share more with you from it! I feel like this week has been one of those weeks where I’m soaking up all that I read and hear, constantly trying to take every thought captive. It’s definitely been a stretching week, one that I could categorize as a wrestling match of my flesh vs. Spirit.

My calendar tells me today is Friday, January 29th and I’m going to have to take it’s word for it because last I checked it was Monday and January 1st! 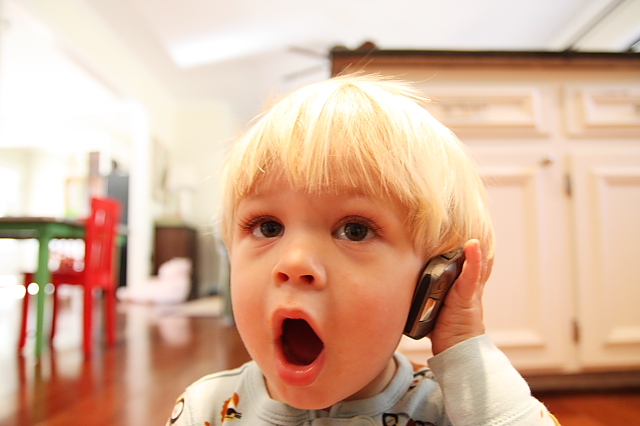 John Martin has heard word that his DaddyBoy has also been photographed in a dress. He was quite surprised by the news, seeing as how DaddyBoy is so manly and all… but the proof is in the pudding picture. {Thanks, Mimi!} 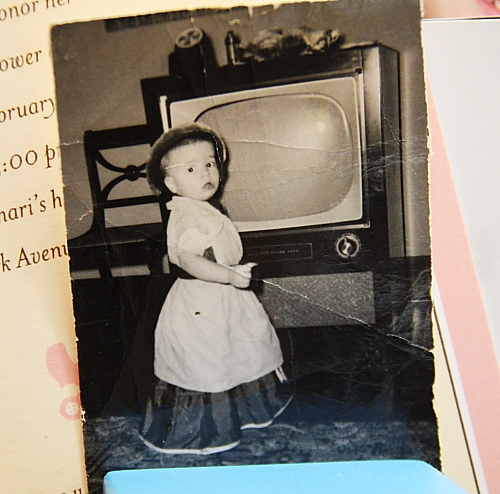 In other news, Morgan can read and write. {Notice, I didn’t say spell.} And for the most part she’s a lovely child but when I attempted to enter the playroom and saw this sign I couldn’t decide if I was proud of her for sounding out her letters or if I wanted to tear it into a million pieces. 🙂 Needless to say, it’s still hangs. I really thought this wasn’t coming until 12 or 13. 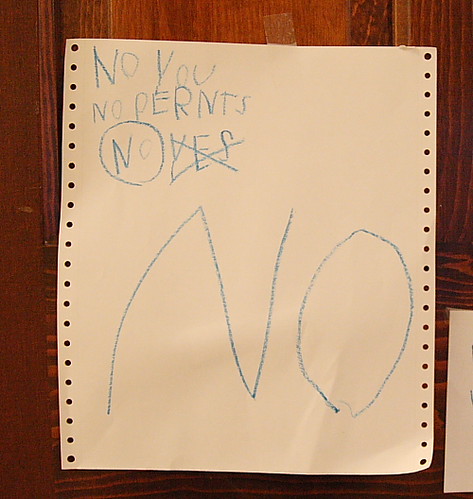 She also loves to read street signs, more specifically the ones that have the speed limit on them. I’m trying to decide if asking her to close her eyes while we’re in the car is asking too much because every SINGLE time we pass a speed limit sign she says, “20 miles an hour Momma, how fast are you going?!” Mom, if  I did this when I was 5, I’m so sorry. They keep us honest, don’t they!?! 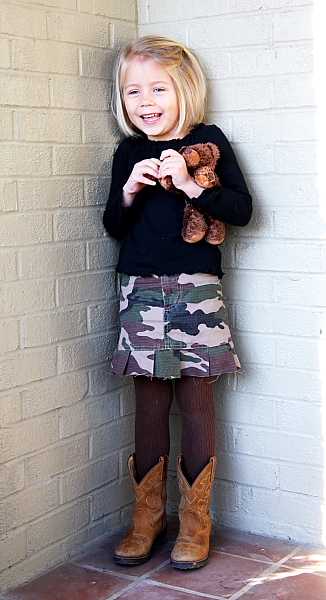 She had a big “bear hunt” yesterday at preschool and the teachers asked that they wear monochromatic clothing or camouflage. Even though her skirt made her look like a big girl, it was more fun than I’ve ever imagined camo being! I picked it up at the Rescue Mission thrift store and after a few drastic alterations {it was about 8 sizes too big} she was good to go. Made me think: I need to think outside of the box when I thrift shop— especially if I find something I like but it’s not my size!!

Anyway, while we were there I had my little rover in tow. While we browsed he spotted this… 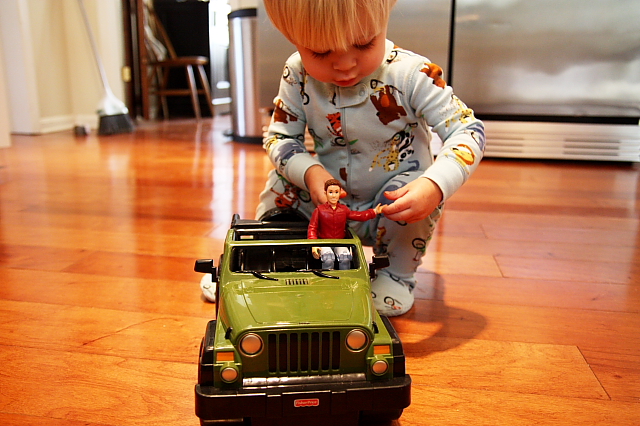 I’m still figuring boys out; they’re definitely a different breed. You would have thought that he literally was going to die right there if I hadn’t given in and forked over a couple dollars for it. I sent Justin a photo text of him holding it and he happily agreed that the young man could have it. I think it’s supposed to be “battery operated by remote control”, anyone have it and know? The remote control nor the man were included. But it has provided so much entertainment for the little Rover. 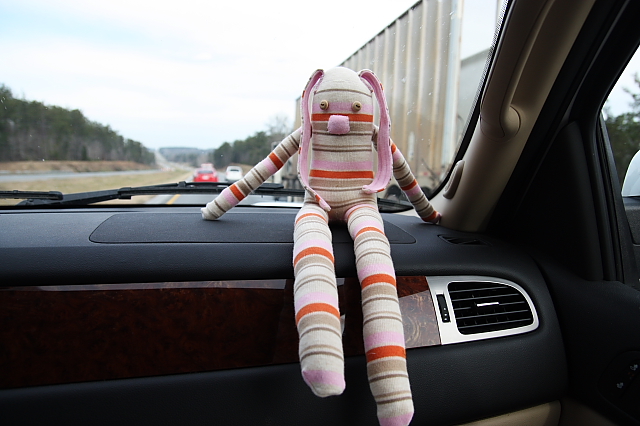 Someone recently asked about the “sock bunny” that I made for Sloane for Christmas. I didn’t intend to do a tutorial on it but I’ll gladly include some pictures and sources so that you can make one if you wish.

I followed this tutorial {for a sock monkey} for every step except the ears and nose and used 2 pairs of socks so that the ears could be pink on the inside. I also didn’t put any batting in the ears. 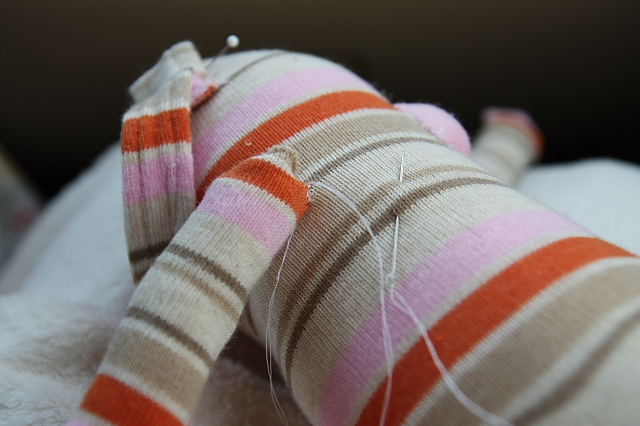 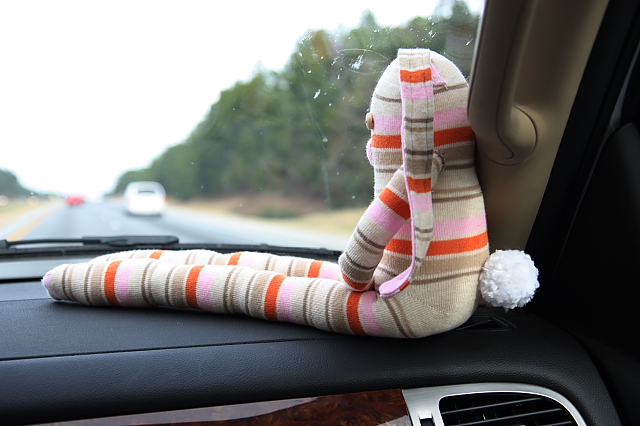 Using fuzzy yarn and this tutorial I made a “cottontail” for the bunny. My first attempt didn’t have enough “wraps” around the fingers… you really should wrap it twice as many times as you think you should wrap. 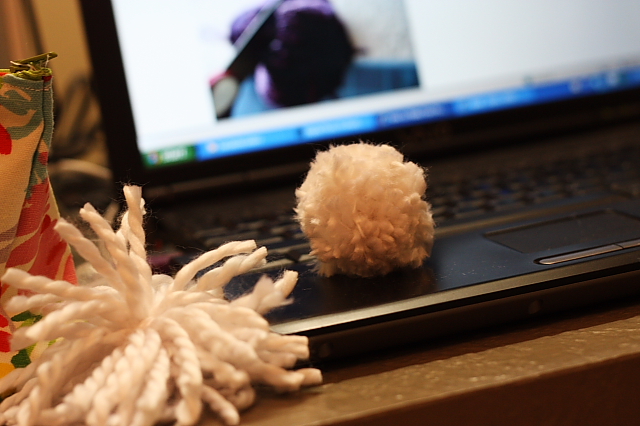 When the bunny’s body was completed I added a few freckles and a smile to it’s face. I was, at first, a little critical that they all weren’t perfect but then reminded myself of the fun of making it all by hand from a pair of socks and the point was for it to be handmade and not look like it was bought from a store! And, I kept telling myself that this is like “sewing folk art”, the more “un-perfect” the better! 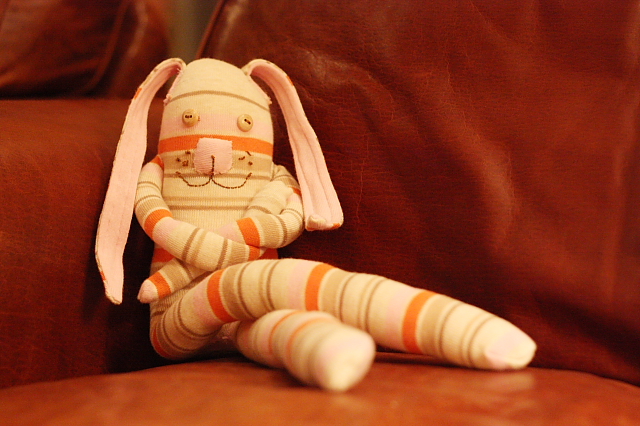 Buttons are a potential choking hazard– so if your child likes to eat buttons {and can chew them off} please be careful! You could, alternatively, sew the eyes out of thread/embroidery floss.

PS- I’m a ways behind on my emails. {A good ways.} Can I just take a quick second and let y’all know that I love each and every one of them? I mean that, really! Each one is such an blessing and I’m trying to figure out how to systematically answer them. I also am trying to do a little housekeeping in the ‘ole in-box. I’m changing a few things up and if you’ve emailed me about advertising and didn’t get an email yesterday from ads@flythroughourwindow.com please email me there and I’ll provide the details!! Thanks!!