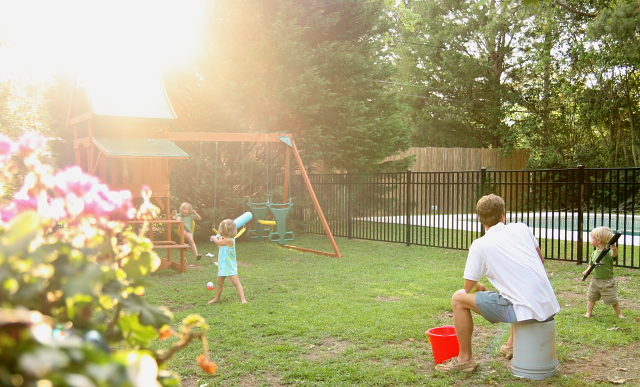 Summer comes early in the Deep South and we welcome it with open arms, pool floats, wiffle balls, seeds, water, dirt, popsicles, sunscreen and brown bath water. Unfortunately with all of these wonderful things it also brings the lovely mosquito and it’s vicious bite.

Speaking of vicious bite… check out these little rovers. 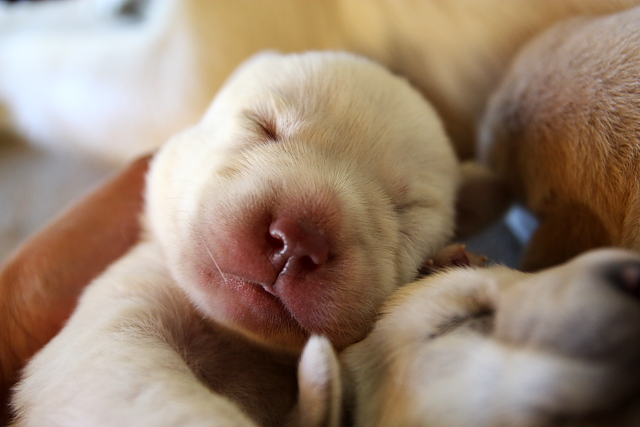 Last Sunday we went over to my brother-in-law & sister-in-law’s house for Mother’s Day and these little rascals were there waiting for us! Justin’s brother ran off and adopted Sunny from the local animal shelter and made an appointment to have her spayed. 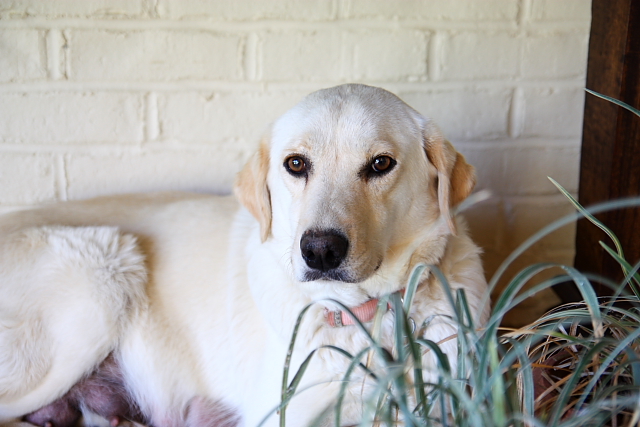 But a few days before she was due for her procedure she popped out three little puppies! You can imagine their surprise when they found her and her puppies in the backyard! She has the sweetest temperament and was so patient with all of us who were enamored with her and her babies.

You’ll never guess who couldn’t get enough of them {besides me}. 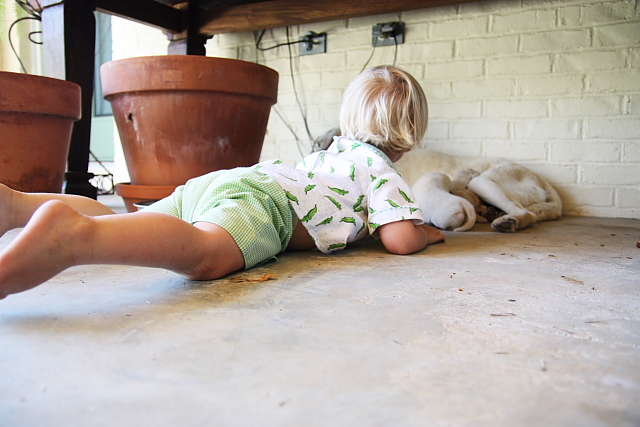 If I could train one to poop in the toilet and not under the swing set I’d  consider getting one!

Earlier this week some friends came over one afternoon to make jewelry. We had so much fun. I have a friend who is a pharmacist by day and talented jeweler by night. She came fully equipped with 239,736 beads and all the necessary parts. We spilled two sweet teas  {one on the table of beads}, ate 2 pounds of M&Ms, laughed a lot, and all walked away with cute new pieces of  handmade jewelry! 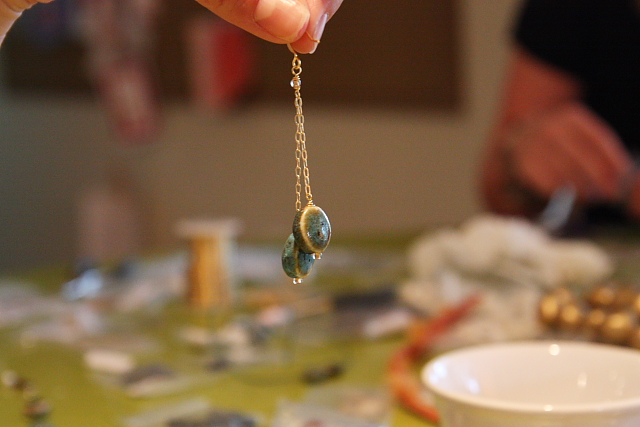 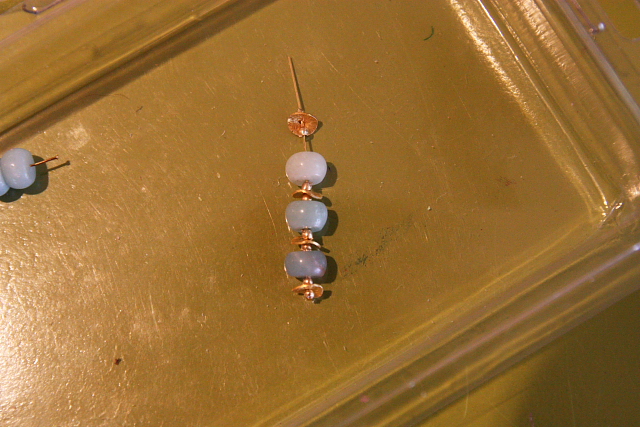 I made a necklace that I loved and when I put it on  to show Justin he asked if I was joking, in case you didn’t know, men aren’t necessarily the most sensitive creatures on the planet. It took me 5 minutes to convince him that it was in fact not a joke and that I really did like it! I keep reminding myself he’s a man, he has no taste in jewelry. 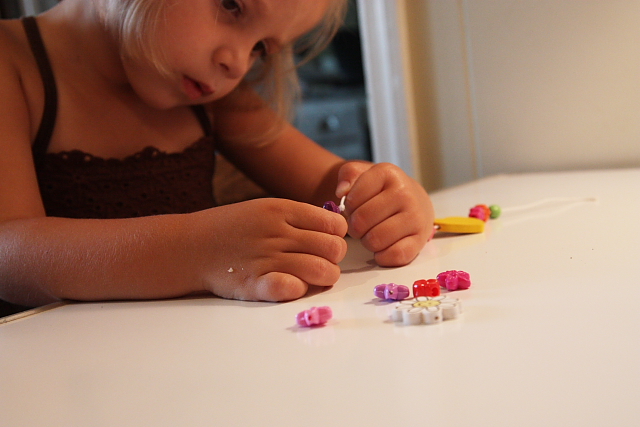 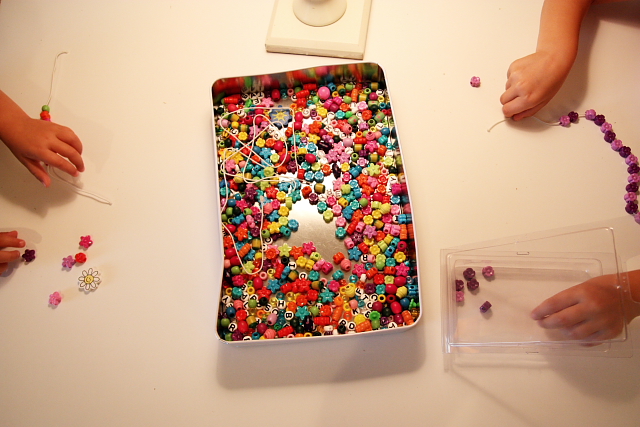 We’ve also been doing a little bit of this…

The girls more so than myself. I like the water to be a balmy 85° before I get in. They’ve been getting in since mid-April and they pretend like it’s not cold. 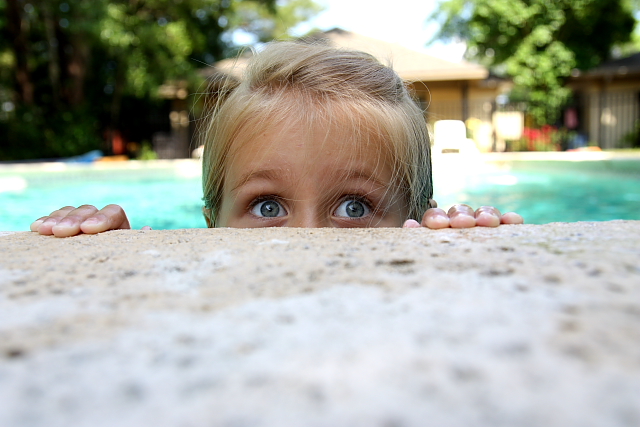 We’ve also been in the back yard… a lot. My head gardener still takes a paci, prefers watering over weeding and on occasion he nearly tramples plants to death. 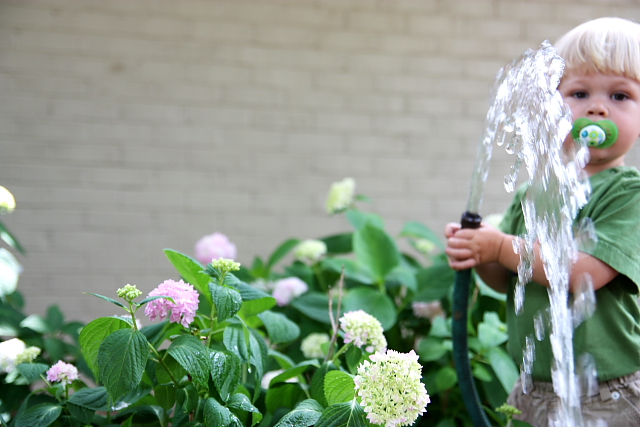 But I can’t bring myself to fire him {or take away his paci for that matter}.

The girls favorite things in the flower beds this year are the Zinnias. We started them from seeds a month or so ago and they’re just now about to bloom! And they’ve been chewed on by some sort of pest… but I think they’re gone now, or so we hope! 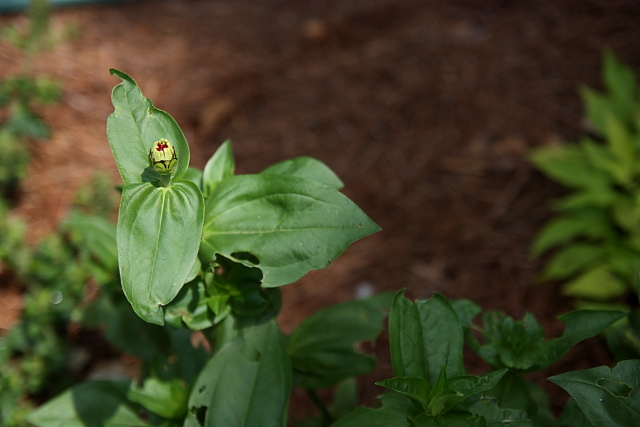 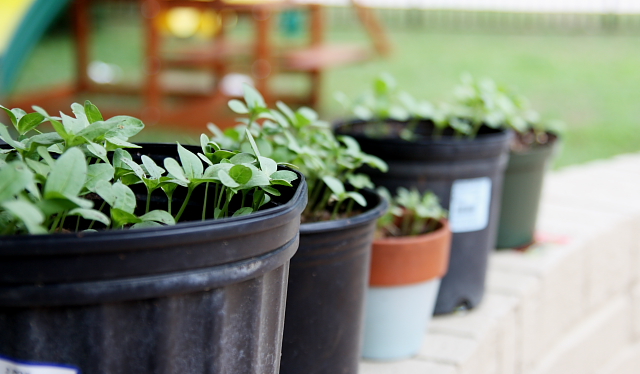 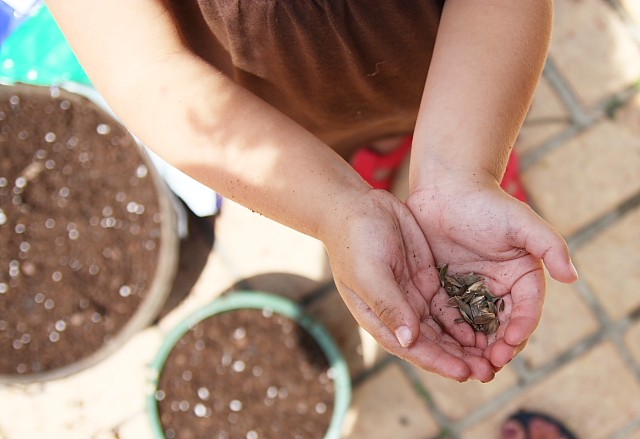 Batch three will likely be my favorite, it’s a mixture of Green Envy & Candy Cane. Zinnias are so easy to grow and thankfully do not require a green thumb. You can start them directly in the soil or transplant them. We like to get them started in pots, thin them out and then transplant them when they’re a couple weeks old. 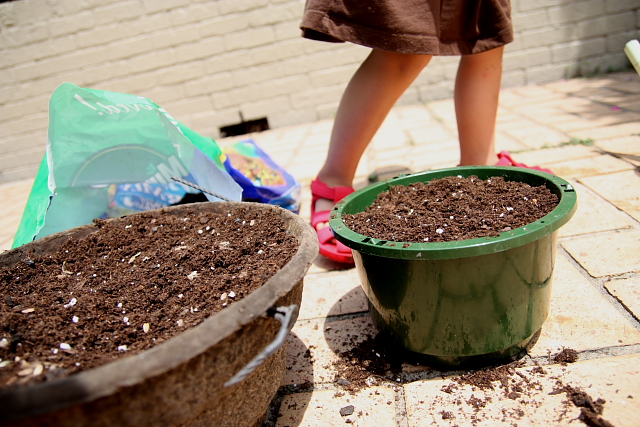 The kids never quite grasp that it takes a few days for the seeds to actually sprout. This is Paige waiting just a few minutes after she planted them to see if they had gawode yet! 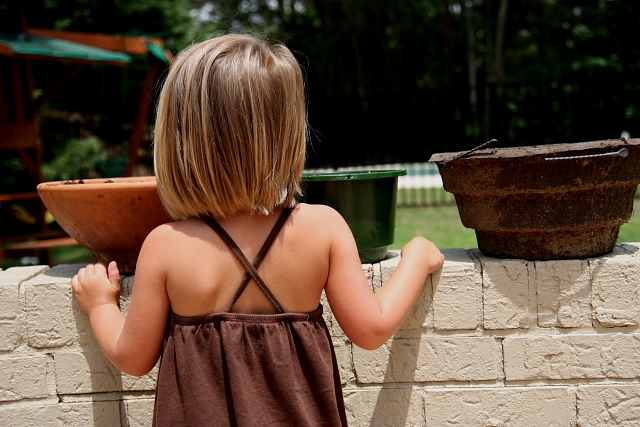 I’m slowly learning that with little ones planters are a better route and are more trample-resistant than flower beds! These are some I put together this year… New Guinea Impatiens, regular Impatiens, and Creeping Jenny. 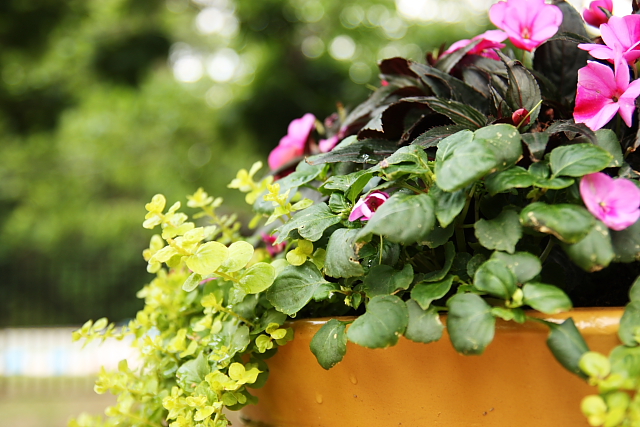 My sister-in-law gave me a coral Geranium for Easter and I put it in a big pot with a lavender one and they seem to be happy together. They sit on our grill which Justin thinks is a little strange to have flowers on the grill and tried to talk me into taking them off the grill last summer… obviously it didn’t work! 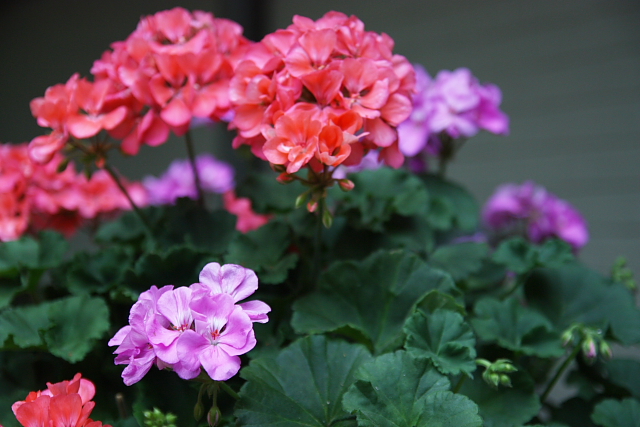 I think that brings the ole blog up to speed on what we’ve been up to. 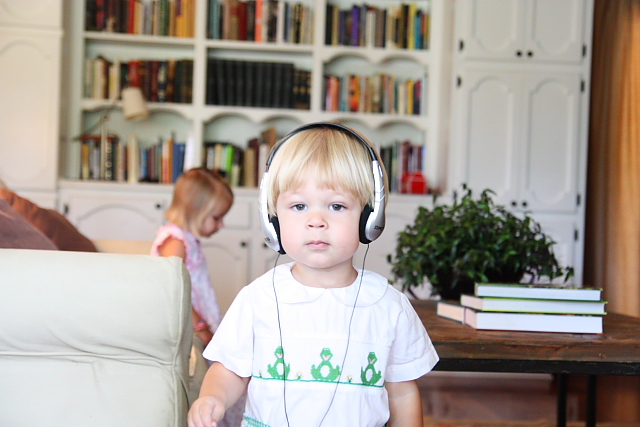 Gotta run… Rover wants a new song on his iPod.

This will be the girls last week of preschool. We love preschool but are very ready to “officially” begin our summer! It will likely be action packed but there will be no, “Hurry, hurry, get dressed, eat your breakfast, grab your snack… we’re going to be late!”

And for good measure… a couple more pics… 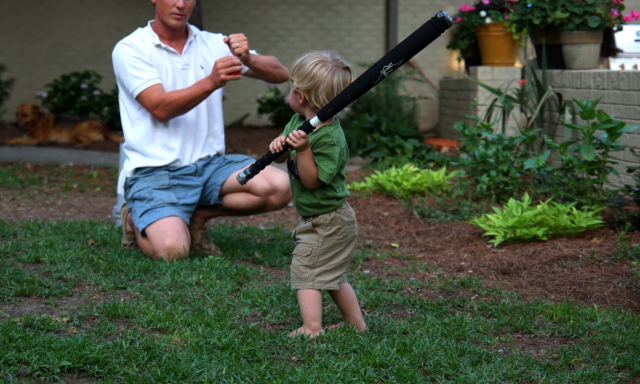 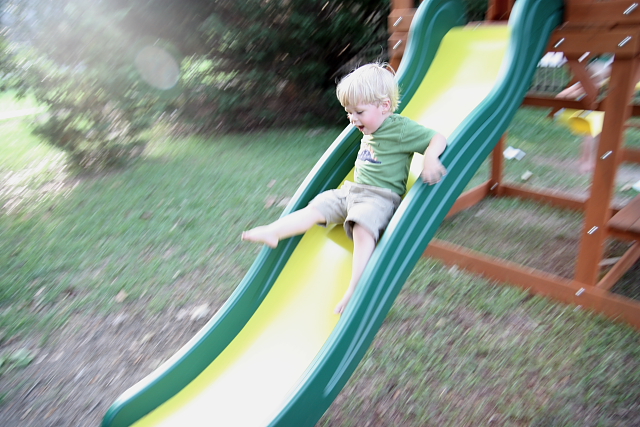