My Eyelids are Held Open with Toothpicks

Well, my eyes aren’t quite held open with toothpicks… yet! I’m totally tuckered out but I thought I’d share a few random thoughts from a very exhausted brain, hopefully you won’t need a translator to figure out what I’m saying. 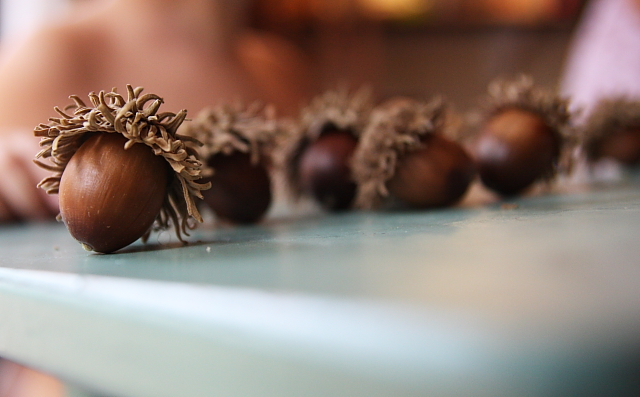 I love weekends a lot and this weekend was no exception.  Morgan and I found these little nature treasures on a walk Saturday morning. I love it when nature captures my attention so much so that I actually pause and thank God for being a total rockstar and creating acorns that look like this… I even offered up a few fist pumps {that’s for you Loerkes <– a fun blog you should check out!} 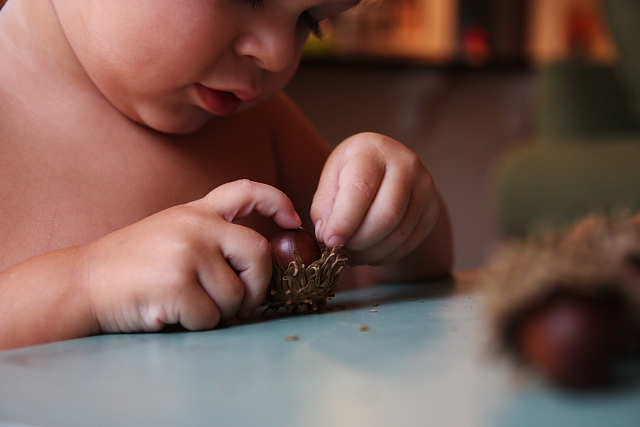 We kindly asked the homeowner if we could snag handfuls of acorns that had fallen to the ground and I just so happened to have bag to fill. I knew they looked like acorns but I also knew the tree from which they were falling looked nothing like an oak. Morgan and I both knew Justin would be able to identify them without a tree guide… sure enough in about .5 seconds he said, “Those are Chinquapins, where did you get them!?” They’re not even in the oak family, like I suspected, but I’m still going to call them acorns because they sure look like acorns… the coolest I’ve ever seen! I had to use a hot glue gun to doctor them up… very few were still in tact. Justin insisted that I save five “seeds” so that we can plant them! There wasn’t much resistance on my end, I’d love a Chinquapin tree or five. Now, I’m trying to figure out what to do with my acorns, any suggestions!? I think they’d be fun as place card holders with a name card tucked in their crazy tops. 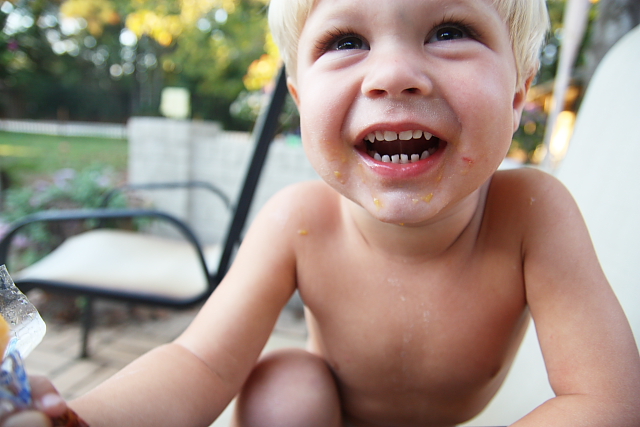 Rover is two and has been since June. Lately Rover likes to act like he’s two. Thank you for your prayers. I go from thinking I might be loosing my mind to melting into a puddle… especially when he looks at me and says, “I won wok Mommy” {translation: I want to rock, Mommy} and so, we rock. And I’ll be the first to admit that rocking the little Rover is nearly the most precious encounter we can have, but when said Rover thinks it’s fun to fight sleep so we can “WOK MOMMY!!” Mommy starts to re-think this rocking business. 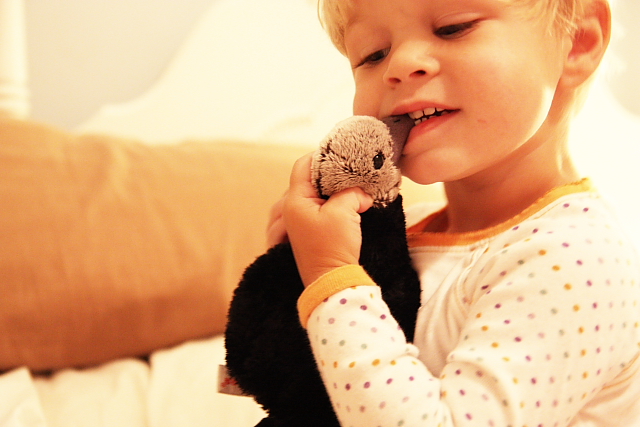 Before we “wok” we climb in the girls bed{s} to read a chapter. He always brings his “hawk” with him and makes birds of prey sounds while we try to read. One day I’ll have to sit him down and let him know that his “hawk” is really a black vulture! Our chapters sound a little like this, 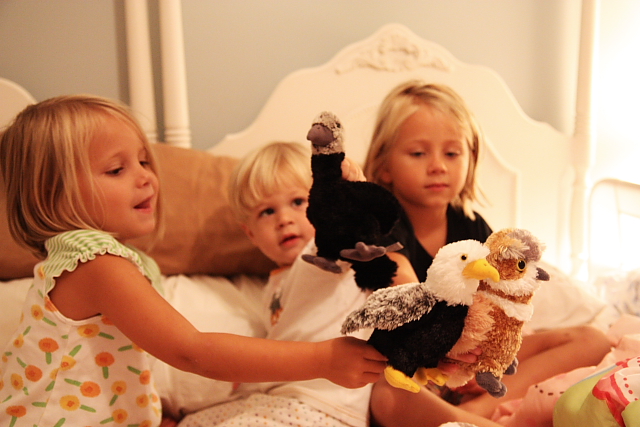 “Ma, Pa, Mary, Laura and Baby Carrie packed up their wagon and headed north. Rover, would you like to go sit in the hall? Laura loved to listen to the wind blow across the prairie as the wagon wheels turned. Rover please take your “hawk” out of your sister’s eye. Once they reached Independence Ma started making dinner… is anyone listening to me?” 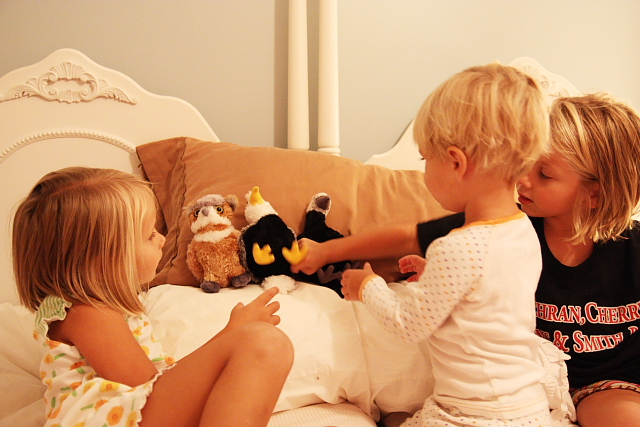 I’ve been “pumping” up my muffins and in the event that you have a bag of Betty Crocker Chocolate Chip Muffin mix in your pantry & a can of pumpkin puree {word on the street is that again this year there’s a shortage… get it if you can} you should put them together, the results are quite tasty! In my opinion, these make a perfect 3:00 snack, that is, if you’re not popping hot air popcorn! 🙂 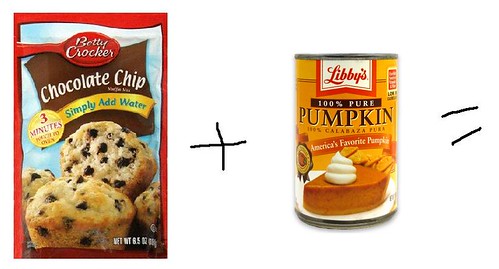 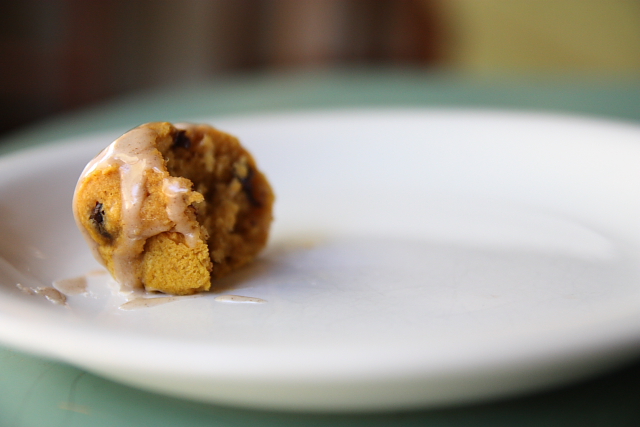 Here’s what I did: addded 3-4 tablespoons LESS of the water it called for, and added about 1/4 cup of pumpkin, and a dash of cinnamon. While they baked I made a cinnamon glaze with powdered sugar, cinnamon, and a little splash of milk… I suggest you pour that glaze over them while they’re still a little warm and then pop them in your mouth really quick before your kids come in… your kids will ask why there are so few and you can explain it was a small batch, which is kinda true… so, if you have two bags of chocolate chip muffin mix, make them both. 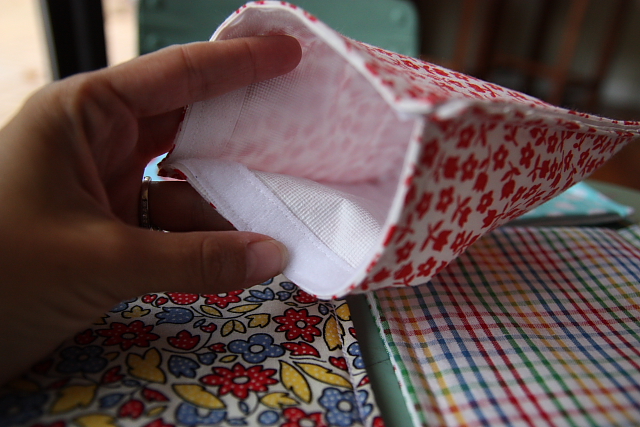 This weekend I was craving a little project. It has been far too long since I’ve sat down behind my sewing machine. When we were at the lake last weekend my friend LA had the coolest little sunscreen bag… she made it with a vinyl inside so she could wipe out and sunscreen spills. We had a conversation on the boat about how she made it and what she used. Seeing as how it’s October I wasn’t really into making a sunscreen pouch but I did want to make a few mini versions of it to use as the kids snack bags. Saturday I sat down and cranked out a few using scraps from my very large scrap pile. 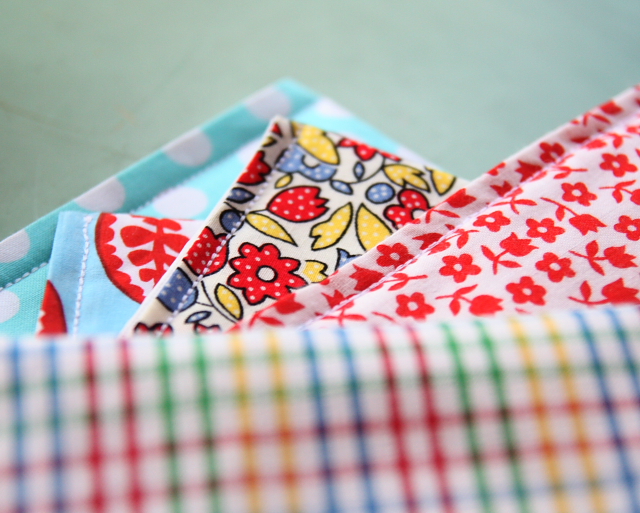 I was pretty excited about the results until I put a snack in it, sealed it up and handed it to Raiger to open. 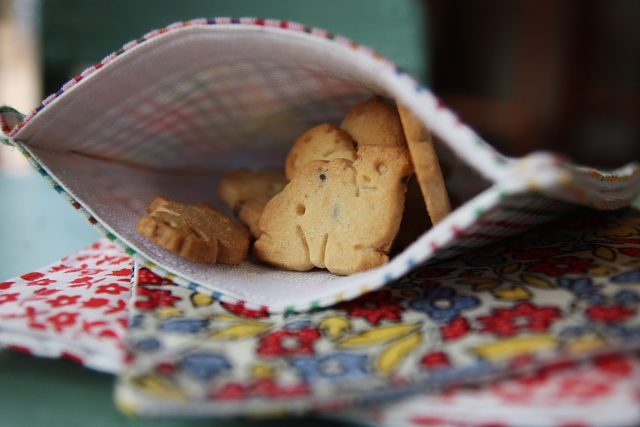 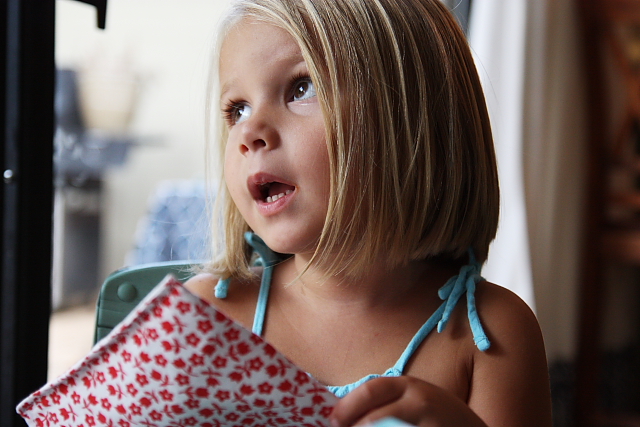 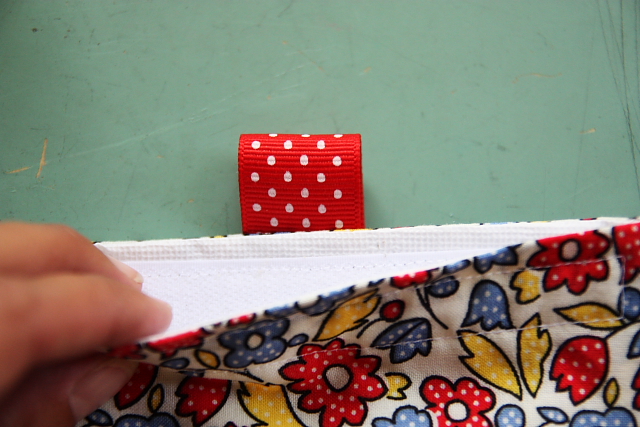 Live and learn.
It was a really easy and quick project, I snapped a few pics along the way so I’ll try to put together a little one page tutorial for a snack bag {with a bonus top tab so the poor children can get into their snack}. 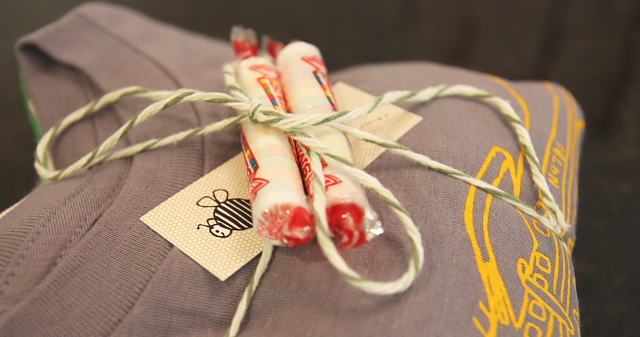 I had a few shirts set aside that have now been added to the shop’s inventory and MORE should be to me by the weekend. I’ve had several folks ask me to email them when a certain t-shirt, in a specific size is back in stock… in a perfect world, I would email each of you and say, “The shirt you wanted in size 2 is in stock now”, but my family would suffer because Mommy would be on the computer a LOT, so the tough love side of me has to ask that you check back periodically to see if what you’re looking for is in… and I will do my best to inform you here! A friend texted me last week and said her kids were more excited about the Smarties… I told her, “The t-shirts are for the moms, the Smarties are for the kids!”  But, if your kids aren’t around when you open your boxes, feel free to eat their Smarties. This is the second time in this post I’ve suggested you eat your children’s food… what is wrong with me!?! 🙂

I better go fix my kids some breakfast, believe it or not,  I promise I won’t eat their portions!

1st: I went the wrong direction