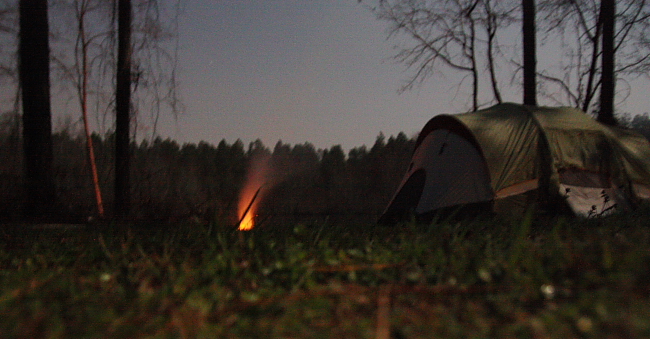 First, before I talk about adventures in camping, in the last post I failed to list carrots in the ingredients of the Hearty Bean & Barley soup… they’re in the instructions but not listed in the ingredients. I have added them now, but in case you copied and pasted pre-edit… you’ll need about a handful of carrots {I use petite baby} sliced. I’m not calculated in the kitchen which makes relaying recipes to you all kinda complicated! But, carrots do make it better, so don’t leave them out!

Now, moving on to our adventure. It was really good! We got a late start, partly because we had to stop for an air mattress on our way. We were camping on Justin’s family’s land, which thankfully afforded us a very wilderness feel, but there was running water about 100 yards from our tent and a toilet {so, does this even count?} ! When we arrived it was 6:10 pm and pitch dark,  which left us to assemble the tent by headlight, not ideal, but we managed to get it assembled in about 45 minutes. The tent was fresh from the box and ENORMOUS. I believe Justin’s dad won it a few years ago and gave it to us, it’s been in our garage ever since. Anyway, it’s a monster; 9 feet tall, sleeps 8 adults {which I can’t imagine 8 adults in 1 tent}, and has 3 separate “rooms”. 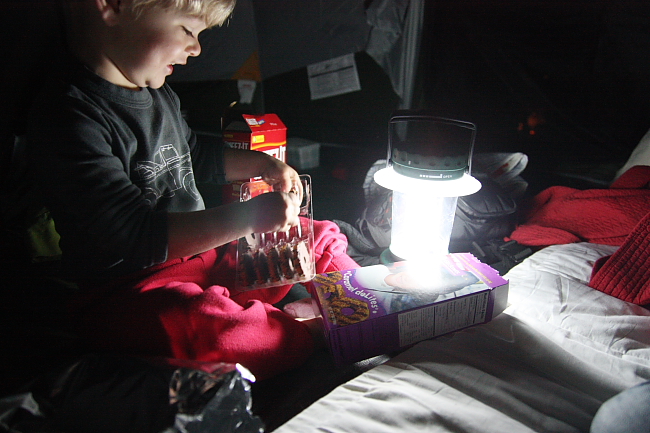 Thankfully when I was in picking up the air mattress I grabbed this little lantern. It proved to be worth the $7 I paid for it because the only other light source we had was a flashlight {or 2}. Rover quickly found the Girl Scout Cookies and insisted they were donuts and he may have had a few before bed. 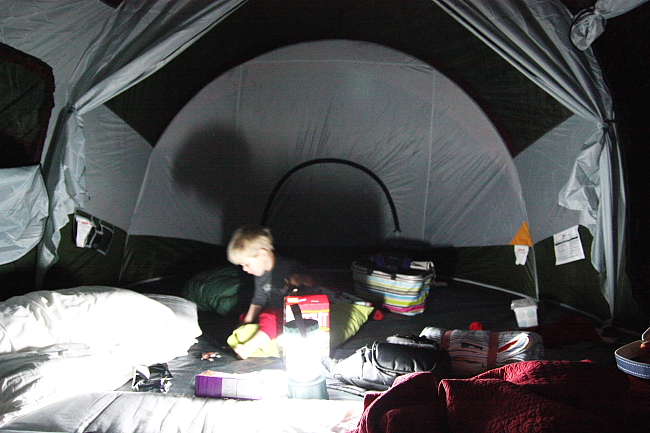 Look, our tent resembles my house!

Have you noticed Rover is rarely without barnyard animals? 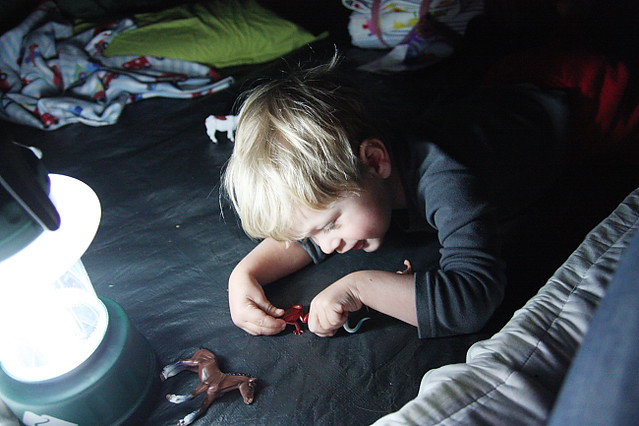 It was really dark before the moon came up and I tried to take a few pictures in the pitch dark, something I don’t have a lot  of experience in and a tripod would have been tremendously helpful! 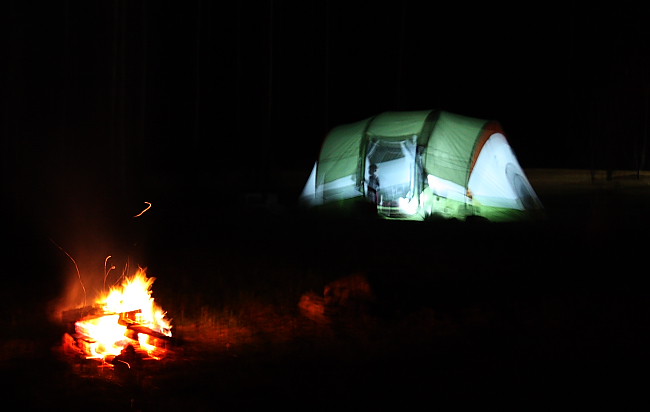 The girls weren’t scared at all and loved every minute of being outside. The busied themselves as the moon rose looking for frogs  on the shore with flash lights. 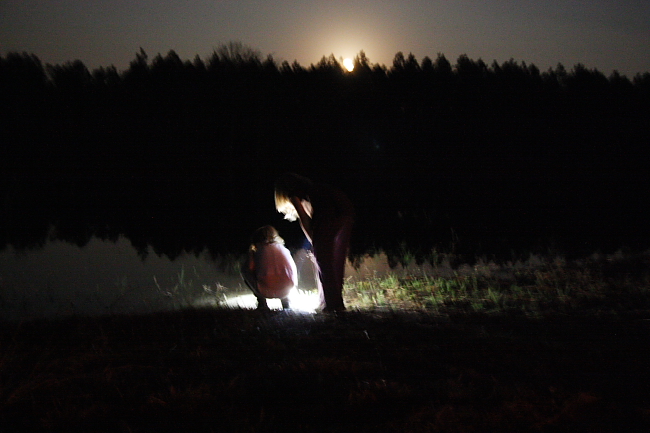 It wasn’t long after that that we all piled in the tent for a good night’s sleep! 🙂 The kids were on their pallet and we were on our half-inflated mattress listening to frogs, owls, and crickets. The air mattress would have been a good idea, if we could get air in it. Three compressors, two that didn’t work and one that only kind of worked, left us with a half-inflated air mattress, and it didn’t take long for us to realize, a half-inflated air mattress is worse than the ground. So I snuggled in with the kids, who actually fell right to sleep. They were sleeping on a memory foam mattress topper  with a down comforter and it was warm and cozy. Unfortunately, it was a queen… so there was just enough room for me and 3 little rovers but one big rover got left on the ground with a cotton blanket that left him very cold. I had a North Face sleeping bag that must have been made for arctic adventures because I was sweating within an hour of getting in it, Justin didn’t find this as funny as I did.  Within a couple hours of falling asleep the little Raiger said, “Mommy, I think I’m going to frow up!” so we rushed her out of the tent and Justin let her get some fresh air by the fire. I got out and decided to take a few pictures, because isn’t that the practical thing to do at 1 am? The moon was full and right over our tent… the best nightlight God could have given us! 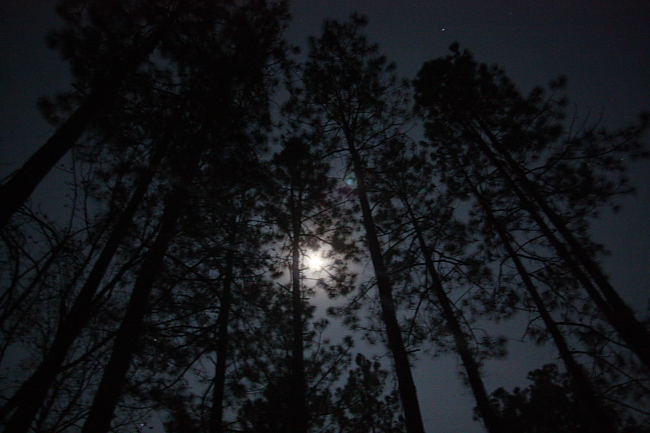 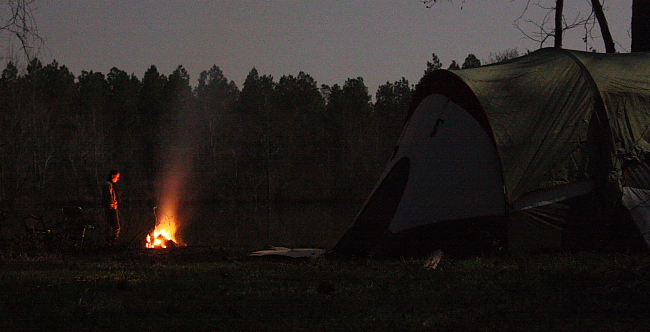 We can camp in February because we live in the Deep South. This property is actually on the Florida line, which also means… we watch out for alligators. Something, thankfully we are very aware of, but not terrified of. A quick survey of the water before bed indicated that there was one little gator in the pond and he was as far away from us as he could get, but we kept the fire kindled all night and kept tabs on him throughout the night when we weren’t sleeping. 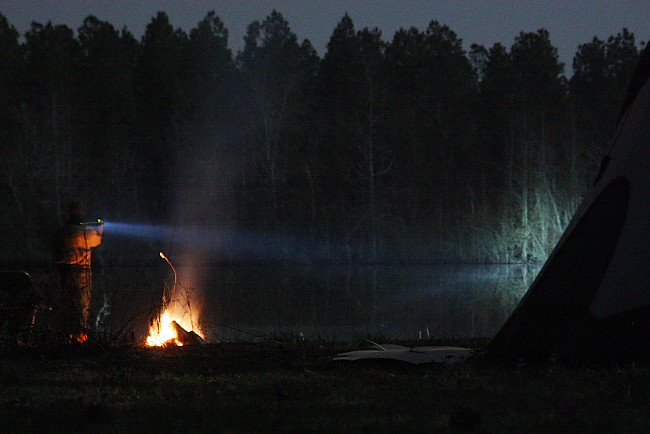 Once more, a couple hours later, Raiger thought she was going to “frow up” again… Justin took her out for fresh air and after that we all got tucked back in and the next thing we knew it was bright in our tent. And it was clear to me that Justin had been up early working on his hair! 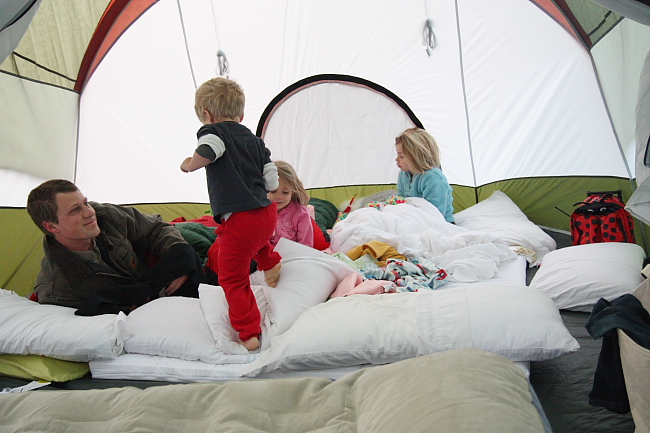 Seeing the light fill our tent was like a crossing a finish line… I made it and it was fun! I don’t want to do it again real soon, but it was fun and we all survived, a little sleep-deprived but we made it! 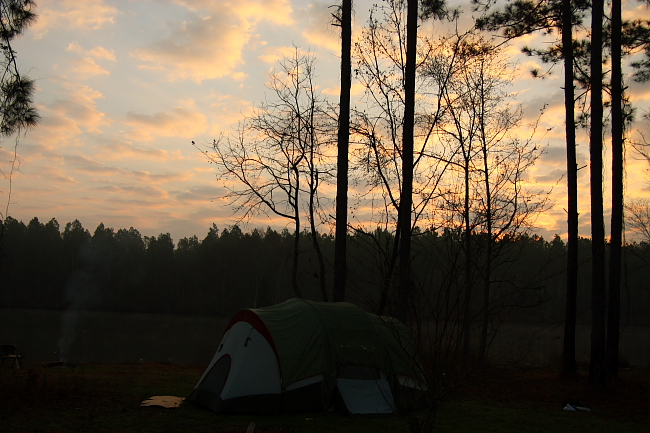 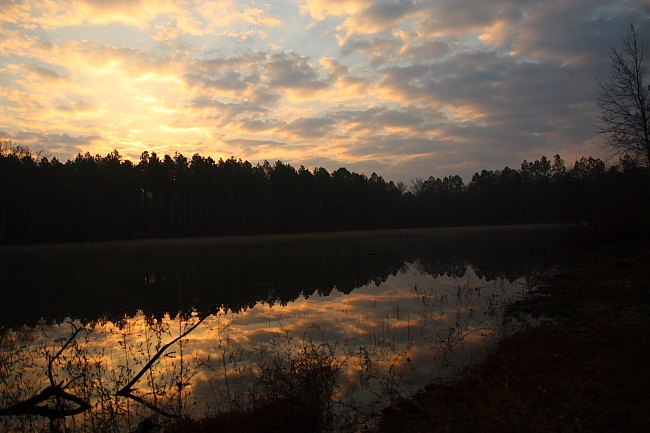 The sunrise was beautiful and everyone was ready to start the morning with the exception of Rover. As most of you probably know, two-year-olds are some of the more irrational creatures on the planet. He did not want to come out of the tent. He had been in and out of it about 25 times the night before but Sunday morning, he wanted nothing to do with coming out. 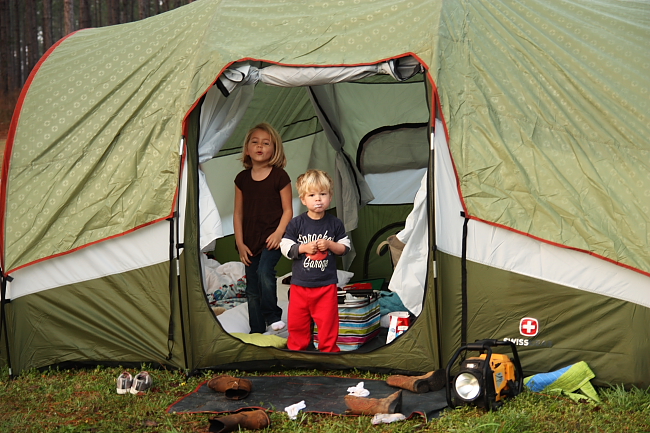 He had a few donuts {in the tent, never a good idea} and then refused to come out. 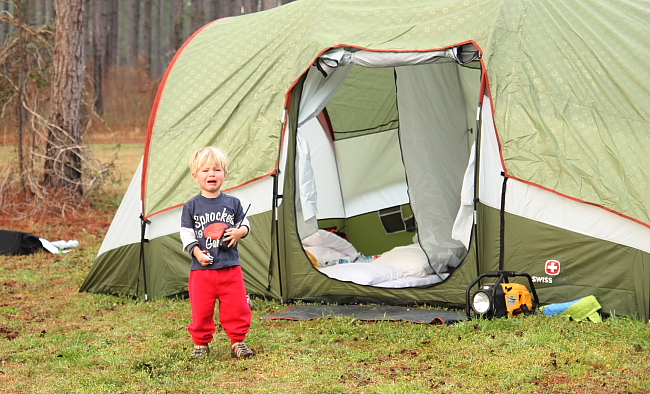 This is when I realized two things. One, how thankful I was that we weren’t at a campground with other campers as he screamed at the top of his lungs at 7:30 am. And second, I realized that maybe he was crying because he looked down and saw that I put red socks on him with shoes that weren’t intended to be worn with socks. I’d cry too.

He finally came out and joined the girls by the campfire. We all looked like we could have used a few more hours of sleep. 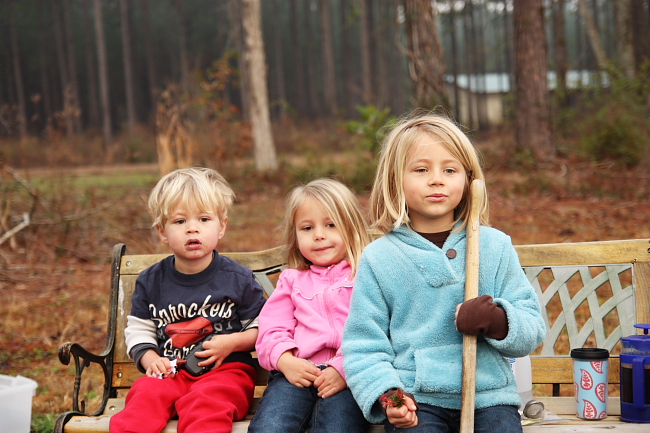 Justin brewed up some campfire coffee and my morning vastly improved. He told me coffee tasted better by the campfire and he was right. 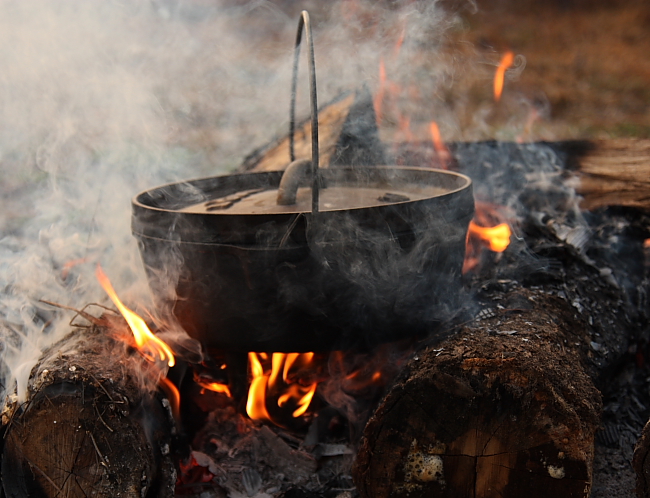 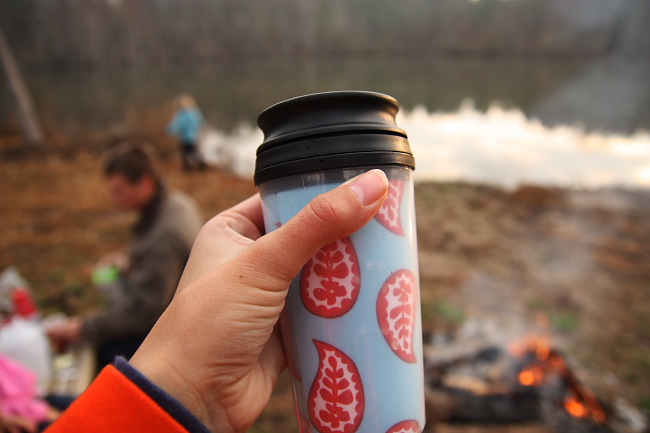 Morgan explored while Justin made breakfast. 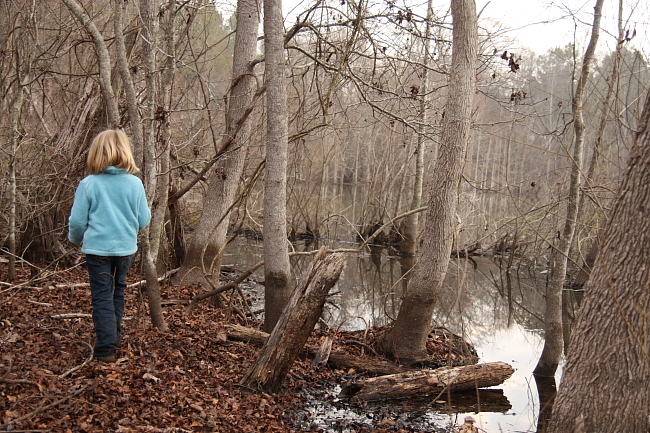 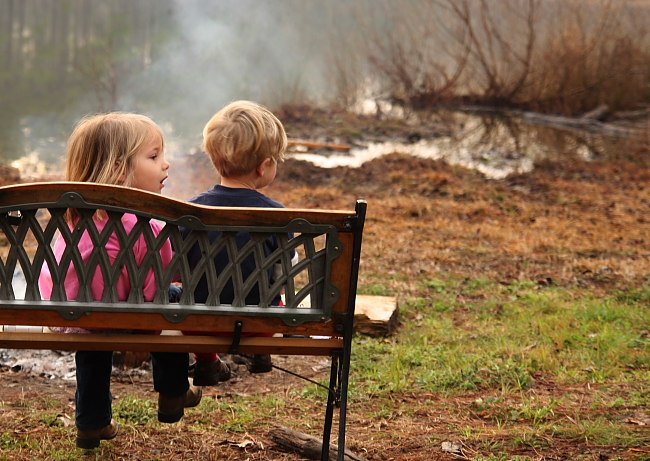 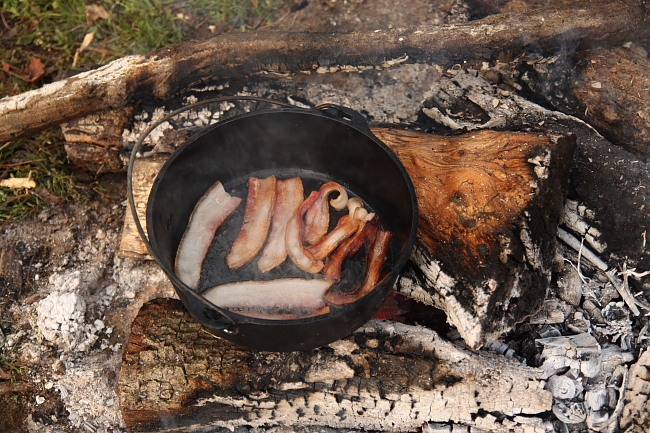 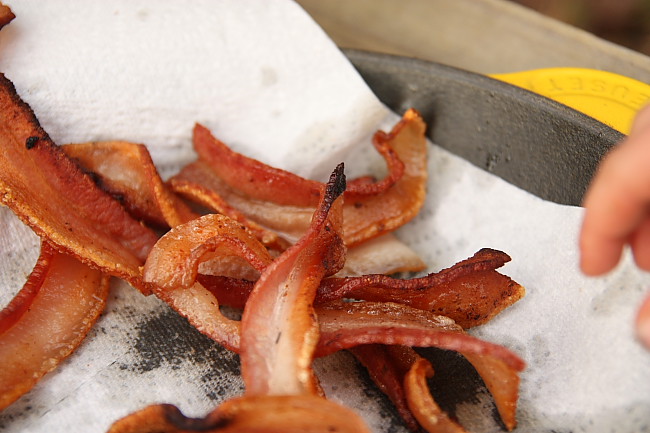 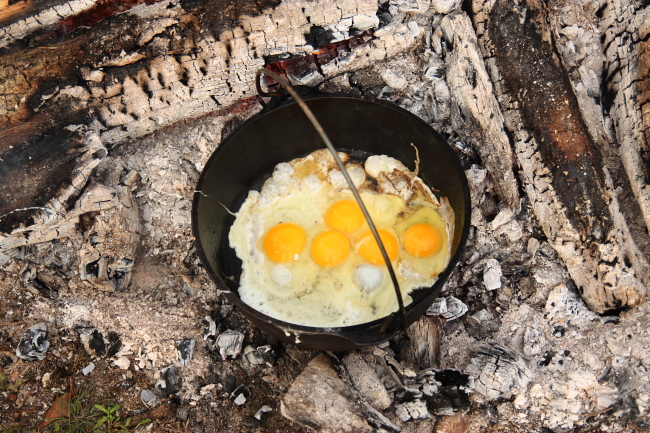 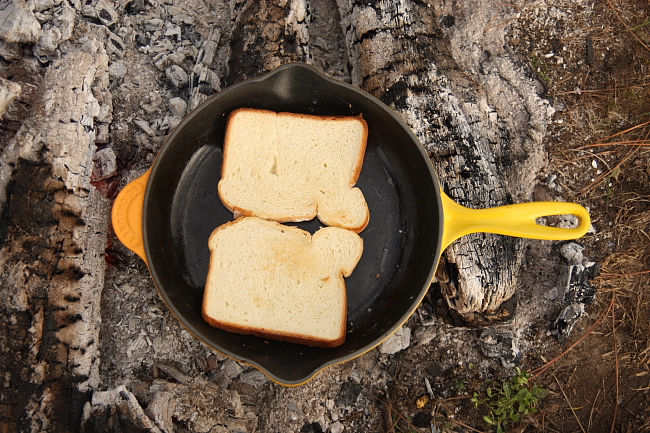 You will not see any pictures of us eating our breakfast because we forgot utensils and closely resembled scavengers. 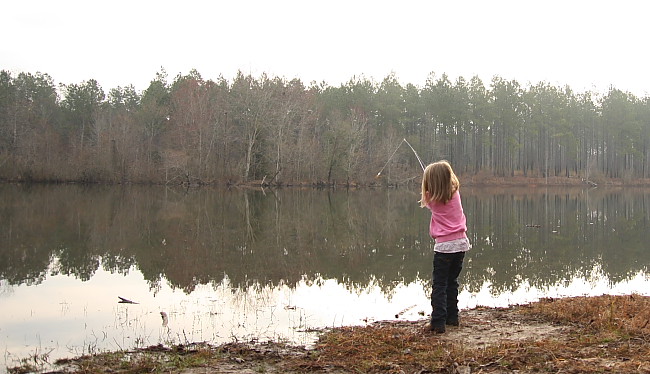 Despite not feeling up to par, Paiger managed to throw several hundred casts, usually catching small pieces of grass that she asked me to pull off the hook each time. 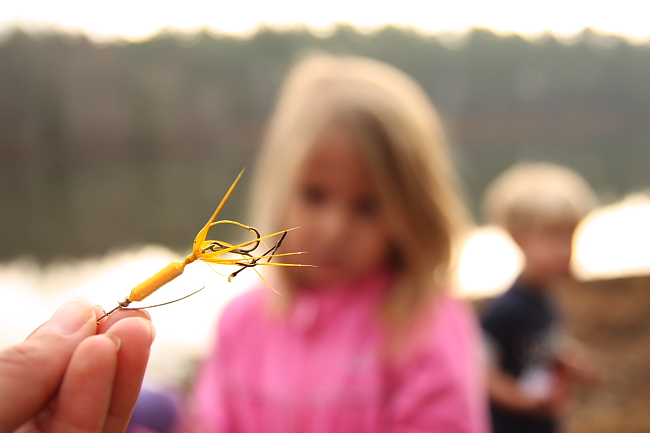 Rover, after reacquainting himself with life outside the tent, kept busy with his various animals. 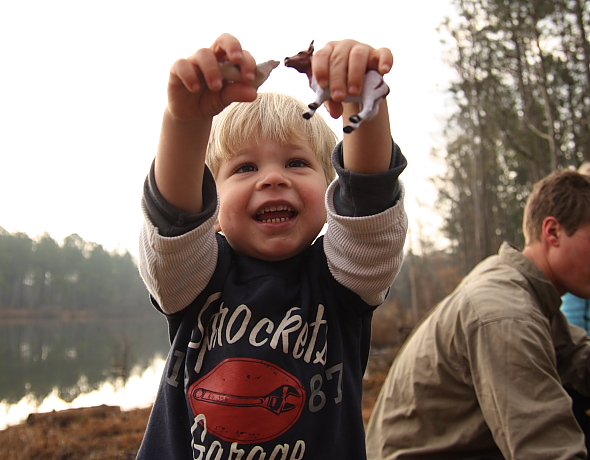 And we wrapped up our adventure with a mule ride {the kind with wheels not legs} around the farm and took a quick peek at the bees! 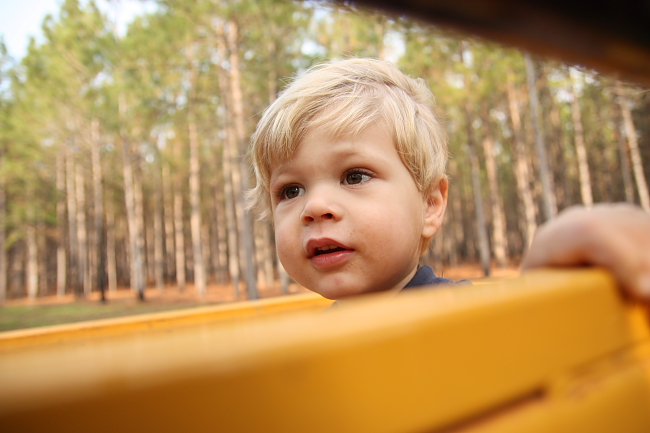 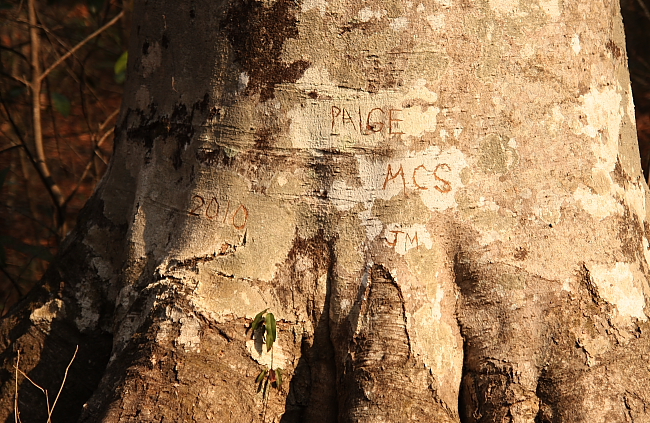 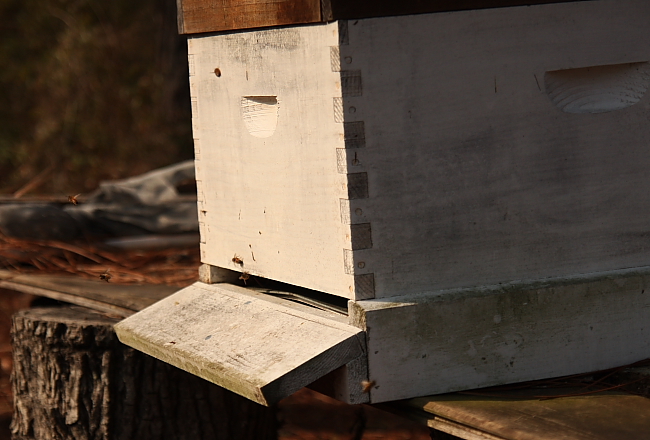 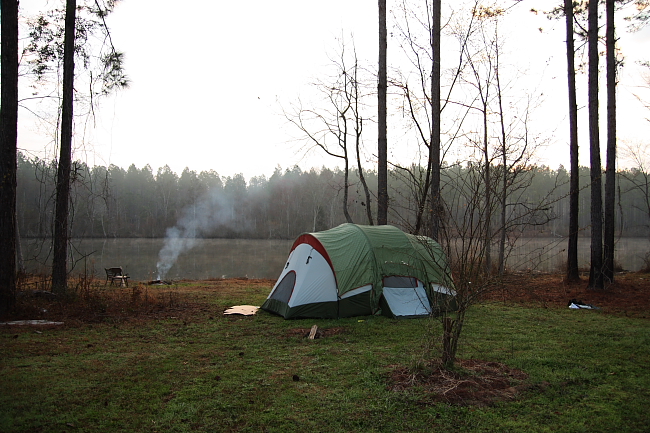 We made our way back to our campsite, hitched the Airstream to the back of the truck and off we went. No… just kidding. We came back to the campsite and spent a good bit of time taking everything down, letting the tent dry, and re-packing the truck with the exorbitant number of pillows that I brought while the kids sat in the truck and fussed. Justin graciously offered to come back down later in the afternoon to fold up the tent because it was still wet with dew.  In all honesty, we had a great time. Nothing fun comes easy, right? Next time we’ll plan a little better, get there a little earlier, bring utensils, make sure the air pump works, and I’ll bring my tripod…. but besides those things we made wonderful memories and I hope to do it again! But don’t think I’m not still convinced that an Airstream isn’t a wonderful idea!

A Birthday Weekend to Remember