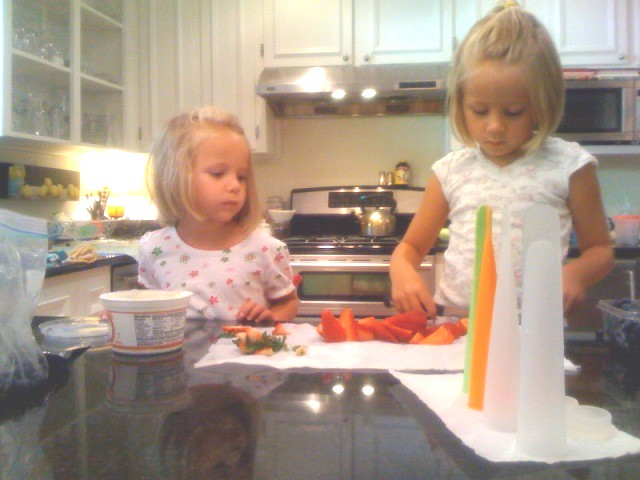 Hey Friends… it’s been a crazy week! Earlier last week the girls and I made homemade popsicles with really cool molds I found in Rome. I think they were meant for gelatto but we loved them for smoothie popsicles! Can you tell these pics are from an iPhone? I’m now the proud owner of one! A friend gave me an extra she had and I’ve been using it for weeks and love it. I don’t have it activated so it’s simply an iTouch but I love having it nearby to capture moments like this!

Anyway, last we talked I told you my body wasn’t feeling too hot, I thought it was jet lag and missing a few nights of sleep but unfortunately my body continued to go downhill. Mom and Mimi left early Thursday morning  and as I adjusted to life back in the “real world” my throat hurt really bad, but Erika had been sick while we were in Italy with a sore throat and I just figured I had what she had. I tried honey, lemon, rum, vitamin C, warm salt water gargles, Advil, Cepacol and finally by Friday I had resorted to leftover Percocet from my wisdom teeth extractions and it was the only thing that would bring me relief. I kept telling myself “Surely, I’m going to feel better tomorrow!” I am the biggest weenie when it comes to going to the doctor… anyway, long story very short… my throat got so bad over the weekend that I felt like I was sort of struggling for air. On Sunday morning I woke Justin up {after coughing, wheezing, barking like a seal, and feeling like I was gasping for air} and told him I needed to see a doctor. He knows when I ask to see a doctor I probably need to see a doctor. And I knew I couldn’t wait until Monday, so he called our close friends to come over and watch the kids and he took me to a local walk-in clinic {that thankfully has Sunday hours}. At this point all I needed and wanted was relief and I was so thankful to be taken serious when seen by the doctor. He immediately gave me a shot of epinephrine followed by an epinephrine breathing treatment that worked really well together to open my swollen my airway and I could finally take a breath and it actually felt like the air made it to my lungs. After I was breathing better I received a shot of pain killer, a couple throat swabs, neck/throat xrays, nasal swabs, and blood work. The doctor was  convinced I have Pertussis {aka Whooping Cough} but the cultures have all been sent off to the CDC for the complete diagnosis. And I was sent home 3 hours later with loads of medicine to get me on the road to recovery! My kids have thankfully all been vaccinated for Pertussis and we are taking other precautions to protect them and Justin from it. I wouldn’t wish it on any other soul.  I basically felt like and sounded like I had a bad case of croup with a sore throat from hell… although adults don’t get croup…  they apparently can get Pertussis, even if you’ve been vaccinated!

I’m so thankful for modern medicine. I don’t know if any of you have ever had the frightful feeling of not being able to breathe but the minute that epinephrine started working I thanked the Lord for medicine.  I’m also thankful the Lord’s plans are greater than our own… Justin was supposed to leave last week for 7 straight days at the Gulf Coast doing archaeological monitoring in the oil recovery efforts and we were both disappointed that it was postponed but when all of this came about we were so thankful that he was here with me this weekend. I am trying to rest as best I can with little ones who are very curious as to why I’m in bed. Rover brought all his animals and books to join me and I couldn’t resist letting him in for a few minutes. 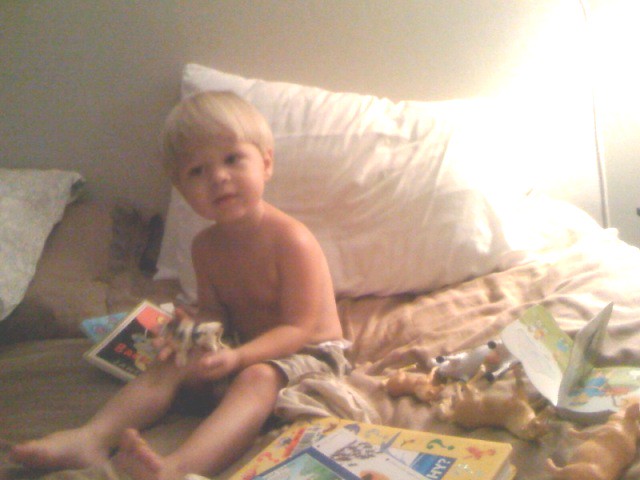 Isn’t he a big boy? Mom helped me with the treacherous job of cutting his hair before she left. He turns 2 in a couple days and I honestly can’t believe it. I feel like my little man was just born a few months ago.

Ok, I’m hoping to catch a few quick zzzz’s before Rover wakes up from his nap! Thank you for your prayers for a quick recovery and for protection for Justin and the kids!!

ps- I’m behind on my emails… thanks for your patience!

And… last but not least, I feel the need to share this hilarity with you! I hope it cracks you up because it sure makes me feel better. I shared it with my cousins and now my inbox is full of ugly faces from them… gotta love family!

When She Grows Up