Well my goodness, I was so confident that summer would bring with it lazy days, schedule-free weeks, and library time! Oh how led myself astray! My posts have been rather scarce lately which doesn’t mean life has slowed down… but been rather full. Justin and I met up with friends Friday night after a crazy week for a fun and casual dinner. We laughed really hard, listened to good music, and enjoyed being out of the house {or I did at least}. Our sitter {thanks, Sydney!!}  snapped a picture of us before we left and I think it perfectly captures our life right now… 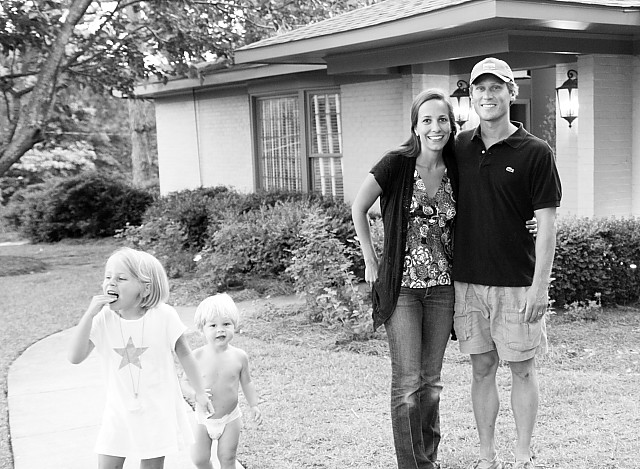 I look exhausted, Morgan is wearing my shirt as a dress and making a grossed out face or something, John Martin is not clothed, Raiger is missing {looks like maybe she’s moving the blinds}, and Justin thankfully is oblivious to it all!!

Over dinner I suggested a game for our friends, I will say I was met with some reluctance but they all came through and played along! Erika actually shared this one with me because she and Chance played it a few weeks ago at a dinner party. I took 7 post-it notes {one for each person excluding myself}, wrote a phrase on the back, and stuck one under each dinner plate. Each person would have to work their phrase into our dinner conversation with out getting called out on it.  The best part was that I didn’t know who had which saying and I loved listening to each person try to manipulate the conversation to work their phrase in. A few of our phrases: “I love kittens so much I think we’re going to buy one!” “Do y’all want to go to a club after dinner?”  “We’re thinking about getting a horse!” Obviously you have to write them to target your audience; none of our friends are likely to suggest we go clubbing after dinner, buy a horse, or love kittens. I love that a guy got the “I love kittens” one. Anyway we laughed pretty hard and I was probably the most entertained… it’s a game you should store away in your brain for a dinner party because there were certainly lots of laughs! 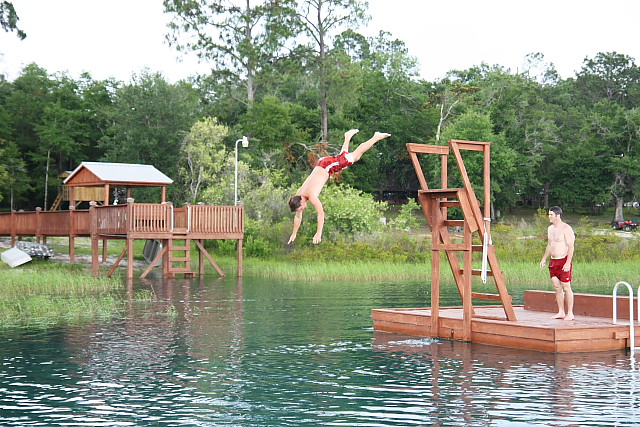 So many of y’all asked about the lake. It’s located outside of Marianna, FL. It is a private lake called Silver Lake but maps show it as “Seventeen-Mile Pond”. Justin’s parents built a house there in 1980 when he was just a toddler,  he has spent many summers and long weekends there throughout his entire life. I’ve had the pleasure of being in the picture for about the last 10 years and am pretty sure I’ve spent every Memorial Day there for all 10 of them! 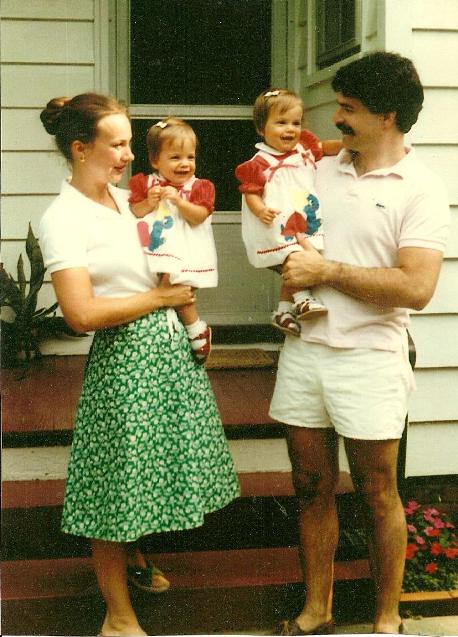 In other news, sister and I have a big birthday coming up next weekend. The picture above was taken on our 1st, this one will be our 30th! For a while now we’ve had plans to spend it together with close friends at the beach, which will hopefully still be oil-free by the weekend. Well, about 4 weeks ago she called and told me to check my email. When I did, attached to her email was a fancy little birthday invitation… to a celebration in Italy. I nearly fell out of the chair. Then tried to get a passport! Which I did, thanks to Facebook, Natalie, and the Department of State’s expedited services! I think I was speechless for several days. She is the best sister anyone could ever ask for; hilarious, dynamic and so very KIND to me! So we are fairly close to embarking on our first European vacation together to visit our friend Erin in Rome. I’ll be sure to take several thousand pictures so you can feel like you’re along for the ride! 🙂

And… last but certainly not least, I would love for y’all to pray for my friend Lindsey. Her 11 month-old baby was accidentally burned last Thursday and tomorrow morning they return to the burn clinic for more evaluation to determine whether or not he will need skin graphs. They are praying that the burns will fully heal, with minimal scarring, and that they can avoid graphs! Thank you in advance for your prayers for their entire family!

Good night, folks! I’ll be back soon with this month’s sponsor post!

Geriatric Swimwear & Things of that Nature