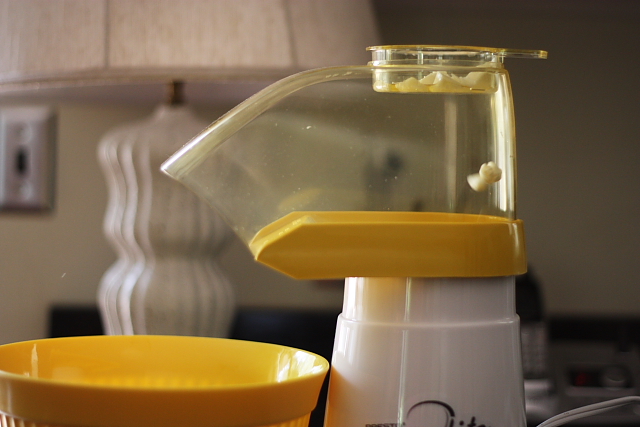 Hello, this will likely be a long post full of a variety of random items from the “blog” section of my brain! If you are a fan of a table of contents, today’s would look something like this:
popcorn
“T” party
paci-free Rover
a weekend away
Jesus Calling, again {iPhone ap giveaway!!}
Radical
DaddyBoy’s new ride

My friend Jenn recently posted about their hot air popper and since then I’ve not been able to get it out of my mind. We used our Presto air popper growing up until microwave popcorn became the latest fad, then there really was no looking back… until now. I was apparently nostalgic for  the popcorn of my youth because I hunted one down, and it wasn’t even a tough hunt. Did you know Walmart still sells hot air poppers for $19 in the small appliance aisle!? I believe we eat $19 worth of microwave popcorn easily in a year… and with that microwave popcorn we also have been consuming lots of sodium, artificial colors, flavors, and plenty of hydrogenated oils. Now we just get popped corn… and to that we, of course, add other goodies, but at least we know what they are… BUTTER & SEA SALT! 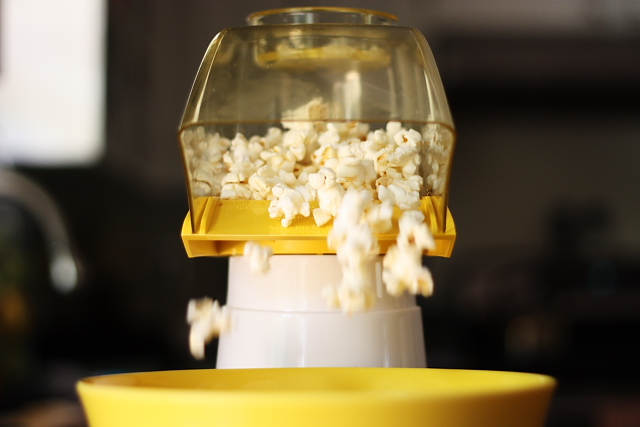 The girls have also been very entertained by our new popper. 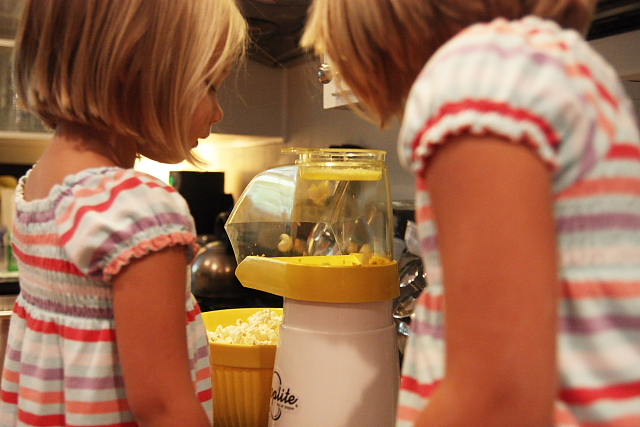 Nearly every day at 3 pm we treat ourselves to big bowl of fresh popcorn! It is SO much better than microwave popcorn. After I eat microwave popcorn my tongue has this strange film on it and all I can think about is how incredibly thirsty I am, and how greasy my fingers are from the “butter flavored grease”… I don’t believe we’ll be looking back to microwave popcorn any time soon! So, consider yourself informed, hot air poppers are really fun, healthy, entertaining and make DELICIOUS popcorn! Do you see the built in butter-melter on top!? It’s perfect! 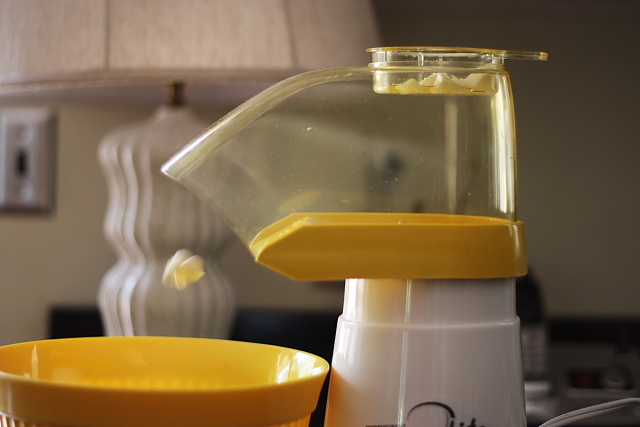 Last week Paige had a “T” party in her classroom! I prayed so much for her this summer leading up to preschool, she is really silly at home but really shy at school. Well, she has done incredibly well and we are not only thankful but so proud of her for being such a brave big girl. The “T” party overwhelmed her just a tad but to see that she would even participate was a big step for her. She kept her head on her shoulder most of the party but no tears were shed and she did what was asked of her!!! The boys and girls learn manners and do a little dance, she got to dance with her good friend Mary Alice, which I’m sure helped! I am thankful to see a boost in her confidence and a decrease in her fear, praise the Lord! 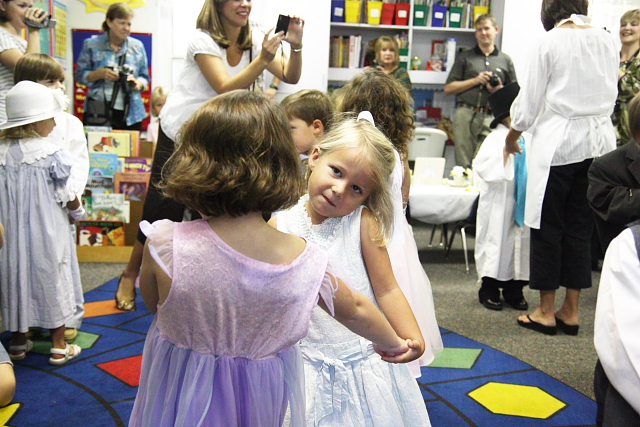 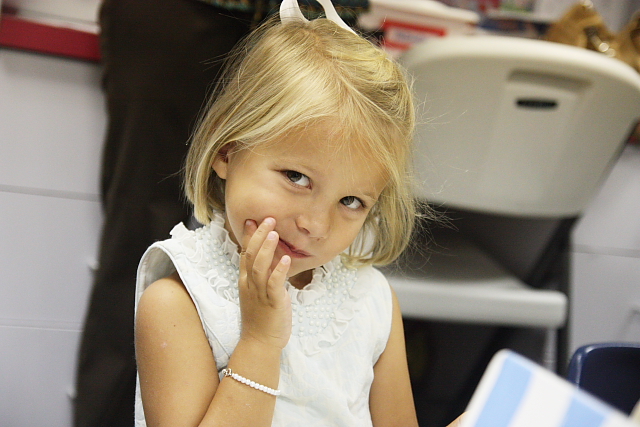 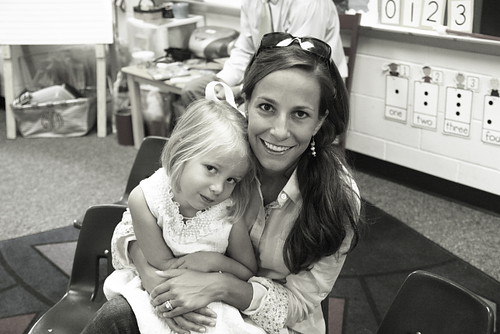 I also took the Rover’s paci away last week… he has been 9 days PACI-free! I’m not sure what made me do it, it was a very spur of the moment decision and all I can say is take it away at age two… don’t wait ’til age three! We waited too long with Paige {3} and it was so much easier this go around. It was a little sad to deprive the little man of something that he loved so much but he’s done remarkably well and hasn’t woken in the night once since we took it away. Naps and bedtime are a little harder, but I’ve been able to rock him some and that is fine by me. I miss holding a still, sweet, sleepy baby so rock we will, if rock we must! He falls asleep so fast and drools down my arm and it makes my heart melt into a puddle. He used to rub his hair and suck his paci, and I now cherish this little picture of his old routine… because I’ve learned that without his paci, he doesn’t rub his hair. 🙁 Speaking of his hair, I’ve been trimming it ever since Mom and I did his big cut at the beach. It is what I call the progressive hair cut. Bless his heart, I can’t seem to get it right, and he really doesn’t care for hair cuts. Tonight he had a bowl of ice cream  topped with sprinkles and hair while I trimmed away. I worked on it last weekend too because he was looking like Yanamamo again, I will likely try again in a couple days. If I keep it up he’ll be bald in a few weeks. 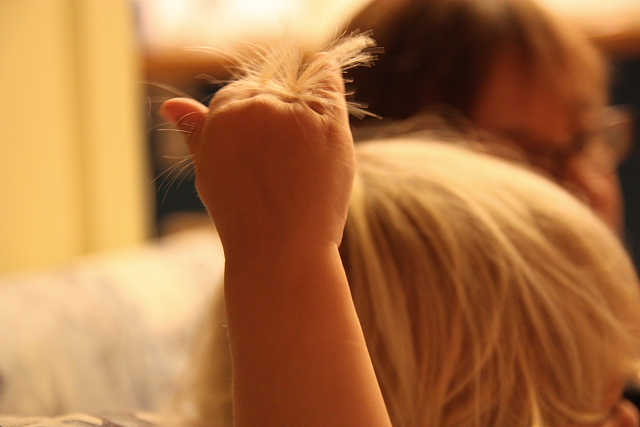 I got to sneak away this weekend with 6 girls for a weekend of R & R at Calloway Gardens! My friend Lindsey was so gracious to put the weekend together for us. In my quest to get great pictures while we were there I made sure I had a full charge on my camera battery and then took off and drove  all the way to Calloway with my battery still plugged in in our kitchen, it’s really hard to take pictures without a camera battery! Dang it! We laughed a lot, talked a lot,  and cried a little. I love women who can be real and vulnerable and share what the Lord is teaching them, it is such an encouragement to me. I can’t speak for the others, but I left refreshed, encouraged, and challenged. I’m grateful for my time away and for these ladies who can welcome a stranger {or two} into their circle of friends!!

September 20th {Monday} I opened Jesus Calling and I was pretty sure that the Holy Spirit intended this to penetrate my heart, and penetrate it did…

When little things don’t go as you had hoped, say “Oh, well.” This simple discipline can protect you from being burdened with an accumulation of petty cares and frustrations. If you practice this diligently, you will make a life-changing discovery: You realize that most of the things that worry you are not important. If you shrug them off immediately and return your focus to Me, you will walk through your days with lighter steps and a joyful heart… You may even reach the point where you can agree with the apostle Paul that all your troubles are light and momentary, compared with the eternal glory being achieved by them. {Proverbs 20:24; 2 Corinthians 4:17-18}

Powerful and true, isn’t it? As I mentioned a week or so ago, there’s also an app for your iPhone. The developer of that app graciously sent me a handful to share with friends, if you’re an iPhone user and interested in a free copy of the app, leave a comment and I’ll randomly pick 4 folks! I generally don’t do giveaways because I don’t really think they’re great, but I do think Jesus Calling is great and because I think y’all are great I’m sure y’all would love a free copy of it!

I also think Radical is great… and hard, and revealing… 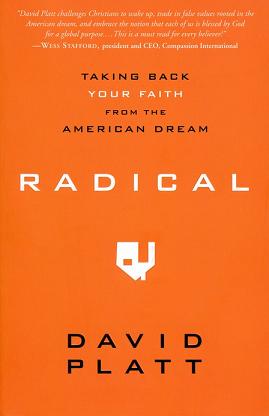 Our Sunday school class is reading through and studying Radical. I mentioned a few months back when I had chance to worship at The Church at Brook Hills how encouraged and challenged I was by David Platt and  how evident it was to me that their congregation is “living out the gospel” in the most tangible ways. I’ve only read through chapter 4 of Radical but I am here to tell you that it has really convicted me, challenged me, and revealed things about me that I’d rather not have been revealed. My eyes have been opened to my own selfish desires to live very comfortably and I can see clearly the church’s tendency to make the gospel what we want it to be rather than what it really  is. Our Monday night small group is made up of couples from our Sunday school class so our discussion has continued on Monday nights and I’m so thankful for a small group where we can share our hearts, including the ugly parts, and encourage one another as we trudge through Radical. It’s full of really hard stuff {isn’t that deep and theological?}. It’s telling of our nation’s priorities, more specifically my own. On page 56, Platt writes, “God delights in using ordinary Christians who come to the end of themselves and choose to trust in his extraordinary provision. He stands ready to allocate his power to all who are radically dependent on him and radically devoted to making much of him.” Do you know how hard it is to come to the end of your self, to get over yourself, your comforts, your pride… to be in this world and not be of it? It’s what keeps most of us from living our lives for the Kingdom of God {I’m very much speaking to myself here}. Speaking of the Kingdom of God, so much of what I’ve read reminds me of the Sermon on the Mount in which Jesus clearly calls us to live our lives in complete contradiction to how the “world” tells us to live our lives. In my own strength living radically would be completely counterfeit and achieve absolutely nothing for His kingdom, it’s only by His power and strength that we could ever live radically for Him.  I hope I will not be the same when I finish this book, and I hope it’s the Gospel that changes me, not Radical. I also have lots of thoughts on blogging… but I better not get started. I remind you, I have a love hate relationship with blogging. 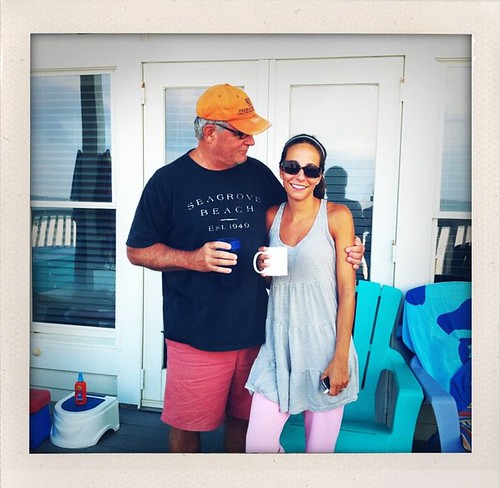 And last but not least, I really love my dad. But earlier this week I contemplated scheduling  him a mental health screening when he sent me a picture of his new car and told me it needed a name. I said, “Ha ha funny, you didn’t buy that, did you?” He said it was a steal… I told him they had better paid him to take it. I could only think of two names for his new Chrysler… Oscar or Cousin Eddie. This is what happens when he is left alone for the weekend, I am confident of four things 1} Mom will never not join him at a car show again, 2} he had buyer’s remorse on Monday morning , 3} if he reads Radical he’ll sell is “real” car and drive this one! {Please no one give him a copy until he sells this car!!} and 4} if he could find some spinners and a good bass system Coolio could use it for Fantastic Voyage II. 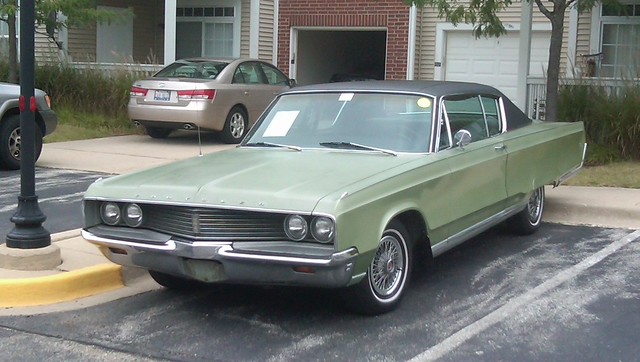 It’s GREAT to be an…